On the day when the market value of Bitcoin exceeded 60%, I wrote an article "The bull market is coming, but not what you think". It is said that this round of bull market will be a bitcoin bull market: 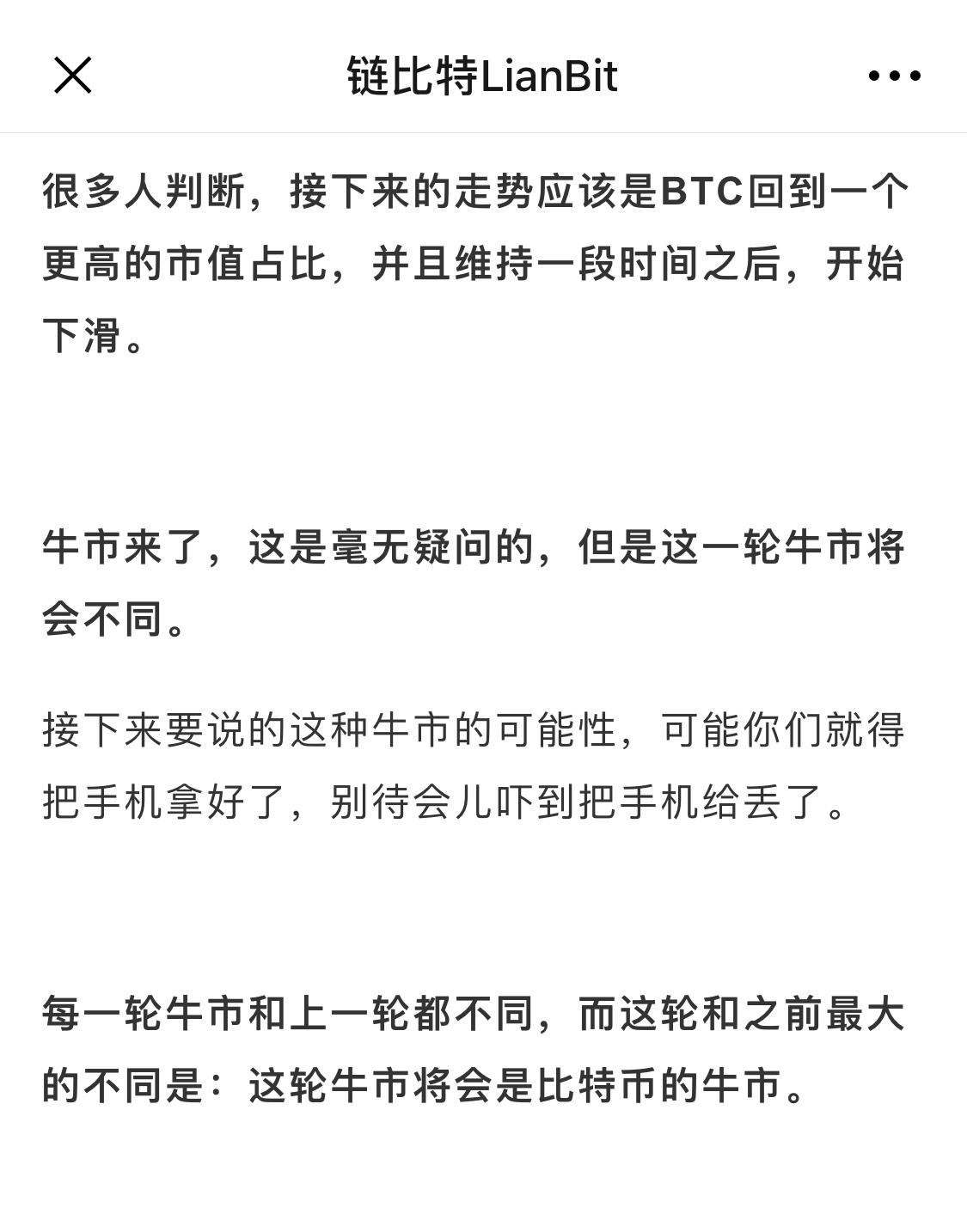 And I wrote some very hearty words in this article, such as:

"I know that many people want the bull market to come. The rising bitcoin can drive a lot of inexplicable coins that are stuck in their hands. It is obviously not possible.

Each round of bull-bear conversion will have a large amount of coins discarded, the probability of the mainstream currency being abandoned is lower, and the probability of the altcoin is higher, but all of them are likely to be reshuffled because of new players and new funds. All are new models and new concepts. No one will pay for the old players. Just like the 17-year-old, they will not buy any bitcoin PPC, domain name currency NMC, feather coin FTC.

Buying a currency other than Bitcoin requires an awareness that he may be eliminated or even eliminated. ” In fact, in the period after this article, the plot developed as I expected, and the market value of Bitcoin has already reached 65%: 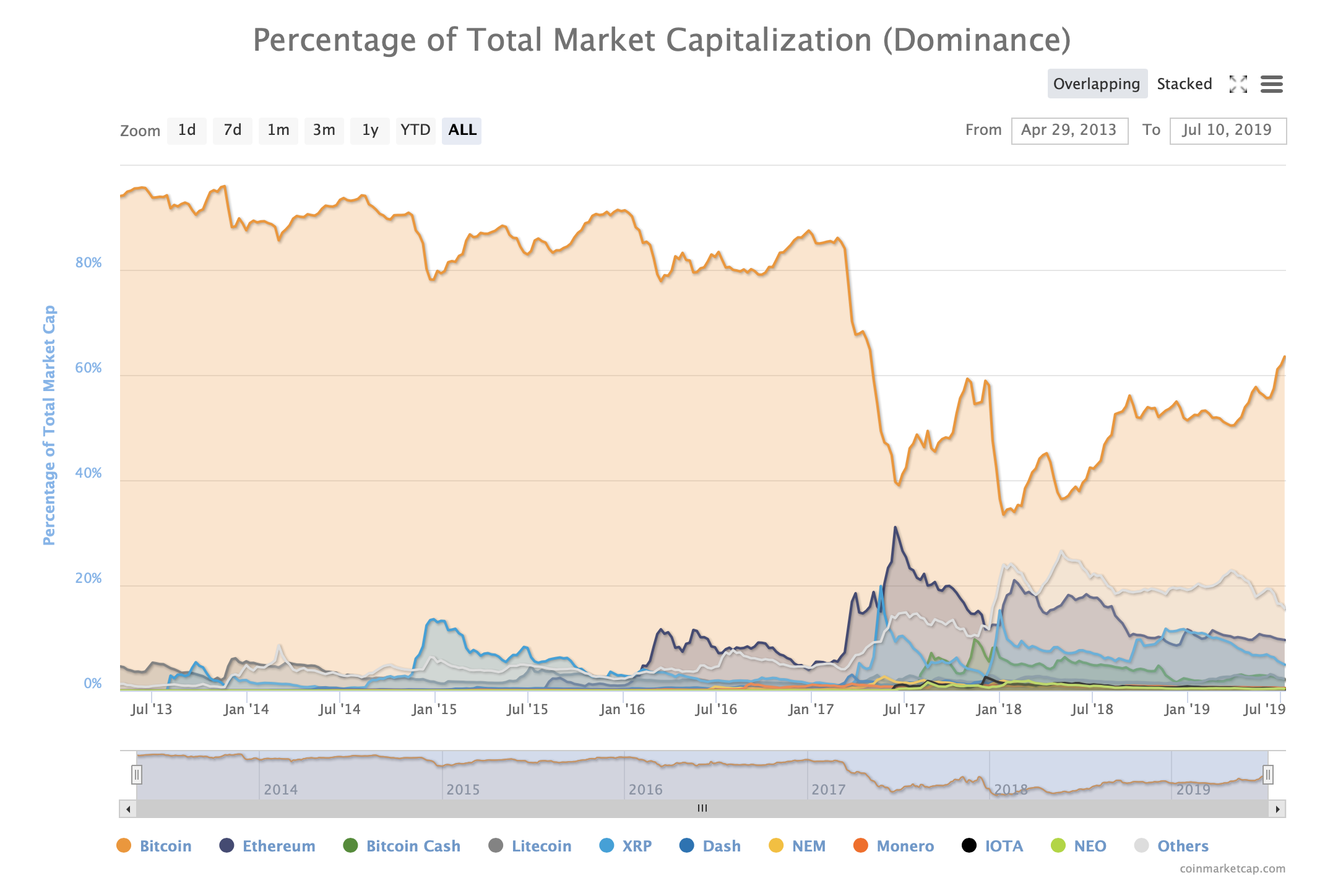 Not to mention the data, the experience of the big guys these days should also be a face:

I sent a microblogging paragraph a few days ago, which is said to have reached every community in the currency circle:

Many people expressed empathy and deeply resonated with most of the amaranth. Bitcoin has risen from more than 3,000 US dollars to 13,000 US dollars, but the wealth of many people seems… not much change?

I know that many people are starting to panic because bitcoin is rising, and other currencies (including mainstream and altcoin, excluding CX) are unmoved. The exchange rate of many currencies has been falling to a new low. For example, the familiar EOS:

If it falls again, the exchange rate will fall back to the level of 9.4 coins in 17 years.

That is to say: in addition to bottoming out after 9.4, you are not worthwhile to buy EOS with bitcoin at any other time.

In any case, this round of bull markets is destined to be a bitcoin bull market.

But is there really no chance for other currencies?

Bitcoin's market share will fall back after reaching a certain height. This is the usual law. After all, bitcoin can't go directly to 80% of the market value. There are also many callbacks in the process from 60% to 65%, and the callback of each market value is actually a mainstream currency opportunity, because the sharp correction of Bitcoin is unlikely to occur, and the current market confidence is also, so the mainstream The reversal of the currency’s downward trend and the start to rise are also worth looking forward to.

What we have to do is to seize the opportunity of the exchange rate turning point and exchange the mainstream currency back to bitcoin at the appropriate time.

“I think the price of quality currencies is already in the end, and it’s time to keep up with Bitcoin’s gains,” his Twitter said.

For the altcoin, it has always been an opportunity. If your altcoin belongs to the kind that was abandoned, then bitcoin does not rise or fall and does not fall, it has nothing to do with you.

Many people hope that mainstream currencies will not miss this round of bull market. In fact, everyone can be assured. The increase in the mainstream bull market in each round is basically not weaker than Bitcoin, such as the previous Ethereum, Litecoin and so on.

The only thing you need to worry about is: Is your mainstream currency still mainstream in the next round?

Bitwise CEO: optimistic about the approval of the Bitcoin ETF, because the SEC's concerns have basically been resolved