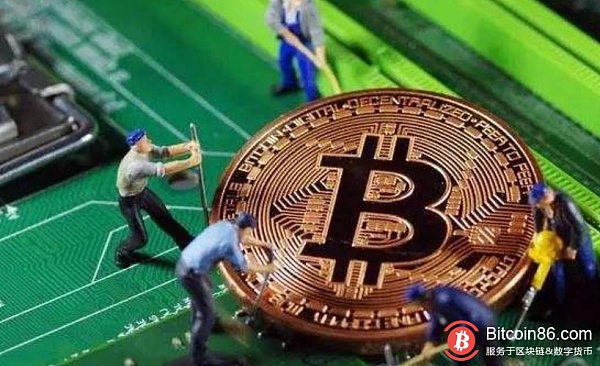 As the price of the currency rises and the water comes, with the increasing difficulty of the calculation, the large-scale mining machine is increasingly sought after by miners and mining machine sellers.

The big calculation power mining machine is hard to find, and the futures are scheduled to be in November-December.

Futures supply is in short supply, and the futures prices of the big computing power mines are rising in different time periods.

A mining machine dealer from Shenzhen Huaqiang North, spelled a single 35 to the 53T ant S17, August futures. The dealer told Deep Chain Finance, "There are not many when it was originally sold, and the family can be divided into dozens."

Zhao Wen, the sales of another mining company, also confirmed this statement: "The big calculation power mining machine is not good, and there are less meat."

At present, the S17 series of mining machine futures has been scheduled for December.

Wang Lei’s mine has already run 890 sets of 53T ants S17. This batch of mining machines is the spot that Wang Lei has collected from several mining companies since May 20th.

Wang Lei is still considering whether to order 1,000 sets of 53T S17 December futures, the price is 420 yuan / T. For Wang Lei, he is not considering the price of the currency, but the cycle of the coin.

"I am a small miner. There is no capital support behind it. Any money is out of my own. Therefore, we need to consider how to maximize profits. Now the market is out of stock, so it has been considered for a long time."

A mining company in Chengdu has also set up Ant S17 and Shenma M20S. The head of a mining company revealed that they bought thousands of 68T Shenma mining machines at a futures price of 190 yuan/T, while 53T's ants S17 grabbed them. Less than 1,000 futures, the average price is about 14,000 yuan. 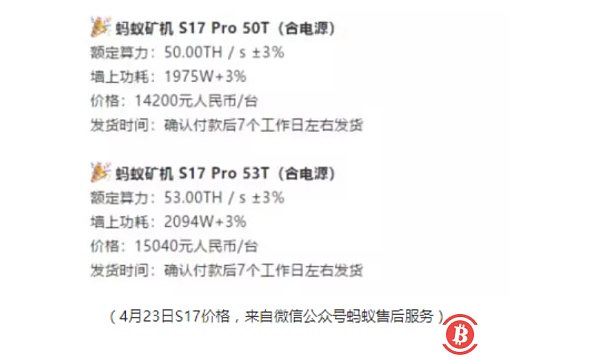 Regarding the pricing of mining machine futures, Bitcoin said to Shenzhen Chain Finance that the price of mining products will take into account various factors such as currency price, total network computing power and difficulty.

In 2018, the miners maintained the security of the Bitcoin network with the 37E's computing power, and also held the last line of defense in the blockchain industry.

On June 27, 2019, Bitcoin rushed to $13,720 and was still asleep in the "bear market will last for two years", completely woke up, regretted not having time to get on the bus.

Bitcoin prices continue to break through new highs, and the flood season has followed.

Zhang Wencheng, director of sales of Shenma Mining Machinery, predicts that by the end of this year, the computing power of Bitcoin will rise to over 100E.

Zhang Li, the founder of the Wolf God Mine Machine, said that because everyone can foresee that when the flood season is over, it is difficult to find cheap electricity. The miners can only buy large-scale, low-power mining machines and survive the dry season. .

Zhang Li believes that the choice of all machines lies in the expectation of bitcoin price, because the difficulty of mining will eventually reach 11T-12T. If the price of the currency is estimated to be 50,000 US dollars, it is no problem to choose what kind of mining machine. With an estimated $20,000, low-power machines will lose their competitive edge.

The production of mining machines is subject to the mass production capacity of the chips.

On March 29 this year, Ant Mining Machine officially announced the second generation of 7nm ant mining machine new S17 series mining machine, which began to be on the official website for sale on April 9.

The major customers of TSMC are mainly from large factories such as Apple, Qualcomm and AMD. The orders of the miners are far less than those of Apple and Qualcomm. Due to insufficient production capacity of the wafer, TSMC's total production capacity is limited, so the order of production of the chips depends on the order quantity.

The founder of Bit Micro, Yang Zuoxing, told Deep Chain Finance that Shen Ma’s chips in the mining machine are still small in TSMC. This is why Shenma Mining chose to abandon TSMC and cooperate with Samsung.

The chip production capacity is insufficient, and the large calculation power mining machine is even more scarce.

Zhang Wencheng revealed that the Shenma miner's shipments in June were around 300,000 units, and the futures miners in August-October have been sold.

Zhao Wen told Deep Chain Finance that, unlike previous years, this year Bit China will give priority to mining miners to miners, and the rest will be distributed to miners.

The mining machine dealer Wang Wei confirmed Zhao Wen’s statement: “There is a rating inside Bitcoin. According to the purchase of the bear market and the order of 20 million, the priority is given to the medium and large miners. It is 100 million yuan, regardless of miners and mining machine dealers."

3, the bull market rescue mine

Zhao Wen recalled: "At the beginning of 2017, the profit of mining machines was not high, and there were not many mining companies. By the beginning of October, the price of coins had risen, and more and more small white users entered the market, and the machines began to be in short supply."

In the busiest time, Zhao Wen had only slept for 2 hours for four consecutive days.

In the second half of 2017, there are more and more mining companies. There are 14 mining machine sales companies including Tiantian Mining, Guihua Technology, and Yan Mining.

In 2018, the cryptocurrency industry was in cold, and the miner's mining machine business was hit hard.

After the BHC war, the entire digital currency market suffered a freezing point, and many small and medium-sized miners could not bear the cost of mining and chose to turn off the machine. Represented by the ant mining machine, which occupies 70% of the mining market, it is continuously cleared out of the mine.

The Bitcoin player "Rotten Apple" had a periodic record of the entire network computing power. On December 7, 2018, the bitcoin computing power fell to 37E.

Zhao Wen described the loss situation of the mining company in the second half of 2018: "At first, the T9+ and Shenma M3 series were very popular. Later, they ordered a batch and lost a batch."

Zhao Wen said that it was precisely because of the difficulty of currency price and calculation that the latter S9, T9+ and M3 had reached the price of shutting down the coins. After these machines were shut down, they were picked up by foreigners, miners and miners.

Mine owner Li Xuewen is one of the receivers of these machines. Before the Spring Festival last year, Li Xuewen ran a total of about 20,000 mining machines, ranging in price from 700-1100 yuan.

Li Xuewen told Deep Chain Finance: "At that time, we had enough 1,000 mines in each mine. We went to the door to collect the miners, and the mines cleared by the mines in Erdos in the Bitian continent were bought by us."

What Li Xuewen did not think was that after the currency price rebounded, these second-hand mining machines that had been treated at low prices rose back. At present, the mining machine has not been sold and is still running on Li Xuewen's mine.

The bull market not only allowed miners and mining companies to catch their breath, but also the mining machine manufacturers passed the capital winter in advance and began to seize a new round of mining machine market.

An industry insider speculates that if Soma's September and October shipments (capacity), if Shenma really out 100,000 M20S, it will steal the market. The person said that Bitland is also thinking about countermeasures.

Bitcoin plunges in "mine circle"…