"Hello everyone, I am a newcomer. I bought 100,000 EOS a few days ago. How can I log in less than a few thousand in the last few days? How many thousands are lost this morning? I would like to ask everyone, how much do we need to debit once? Didn't anyone tell me when I registered? Don't bully me, I am a newcomer!"

How enthusiastic the bull market is, the plunging clouds are bleak; the moment before, the blockchain is still a revolution of the new era, and overnight, it becomes a "scam."

In addition to Bitcoin, many mainstream coins and altcoin prices have returned to a few months ago. For the altcoin holders, the bull market seems to have never been.

Bitcoin plunged as the SEC approved the blockchain startup Blockstack to issue coins.

Of course, the plunge is not just bitcoin.

EOS was the worst, with a drop of more than 21%. It can be said that it has fallen by the previous two months.

At noon today, the currency coin data showed that OKEx increased the amount of stocks of 43.77 million USDTs in one hour, of which BTC broke the number of 1619.58, ETH bursts of 30,400, and EOS bursts reached 3.74 million. One.

In response to the collapse of EOS, some people ridiculed: I am a newcomer. I reloaded 100,000 EOS a few days ago. How do I log in to a few thousand in recent days, and today I have lost tens of thousands?

OK quarterly contract data shows that the prices of mainstream currencies such as EOS, LTC, BCH, and XRP have fallen below the 60-day cost line.

In the opinion of OKEx analysts, the 60-day cost line is the dividing line between the market's medium and long-term strengths. When the price is significantly lower than the cost line, the market's profit-making effect will be greatly reduced, thus damaging the participants' sentiment.

This round of decline began on the evening of July 10.

However, after reaching the high point, Bitcoin turned the bow and turned sharply.

In the vicinity of this time frame, a batch of 90,530 BTC transfers appeared on the bitcoin chain. It turned out that the currency was in the wallet, but this caused much panic in the market.

From the low point at the beginning of the year to the highest point of this year, bitcoin prices have risen more than four times in half a year. It is difficult for the market to maintain buying of Bitcoin over $13,000. Some large sell-offs have caused bitcoin prices to fall.

On the evening of July 9, Beijing time, there was a large sell-off of bitcoin on the Currency Exchange. Nearly 7,000 BTCs were sold in a concentrated manner, which directly led to a drop of about $400 in BTC prices.

The professional investment community TradingView's big V Yu Bolun seems that with the benefit of cashing, the profit increase, the main force does not have the mood to stand tall, choose to ship, while shipping, there is no new hot spot to bring in capital inflows.

He mentioned an important indicator, the premium ratio of USDT. If the premium of RMB to USDT is high, it can be understood as the entry of new RMB funds, which is the normal state of the last two or three months.

Generally speaking, when bitcoin skyrockets, FOMO sentiment will bring a lot of money to catch up, resulting in a premium for USDT outside the market. USDT against the RMB was as high as 7.2, and the trend has changed since the last bitcoin rose. Bitcoin is on the rise, while the USDT premium is falling. It once fell to around 6.86, a two-month low.

Yu Bolun speculated that while Bitcoin has risen sharply recently, it is also covering large-scale shipments.

This phenomenon is also mentioned in TokenGazer's latest analysis report. TokenGazer pointed out that due to policy restrictions, Chinese users can only buy USDT through OTC transactions, and then use USDT to buy Bitcoin or other cryptocurrency. The disappearance of USDT to RMB premium means that Chinese traders encrypt. The reduction in the buying power of money.

The fall is coming, and compared to bitcoin, mainstream coins and altcoin tend to experience even greater declines.

On July 8, the Office of the Attorney General of New York (NYAG) filed an objection to the New York Supreme Court, a statement of law, and a total of 28 pieces of evidence to denounce Bitfinex and Tether.

NYAG stated in the new document: “Even a cursory review of the facts collected so far in the OAG survey indicates that the respondents have extensive and continuous contacts with New York residents in this investigation.”

The documents also contain a variety of evidence that Bitfinex and Tether have served New York residents for a period of time longer than previously claimed.

NYAG filed a lawsuit against Bitfinex and Tether for the first time in April 2019, alleging that Bitfinex had covered more than $850 million in losses by borrowing from Tether's reserves.

Concerns about the uncertainty of USDT's future will also lead to large investors choosing cash to realize and avoiding risks.

Regardless of whether it is a cryptocurrency or a stock market, there is an investor's expected management. A good cash is a bad one, and a bad cash is a good one.

Facebook's currency, Fed rate cuts, LTC halving and other good news were digested by the market one by one. There is no new hotspot relay to attract external funds. The main force is not willing to stand tall and will choose the book to take profit and cash.

On July 10th, Fed Chairman Powell released a strong interest rate cut signal in the testimony of Congress. In the testimony submitted to the House Financial Services Committee, as the uncertainty of the economic outlook continues, business investment across the United States has recently Slow down.

Inflation has been below the 2% target of the Federal Open Market Committee (FOMC), and trade conflicts and concerns about global economic growth have been in conflict with economic activity and economic prospects. The central bank will “appropriately” take “appropriate action” to Maintain current economic expansion.

After the announcement of the above-mentioned remarks, stocks and other risky assets rebounded sharply. Both the US Nasdaq and the Standard & Poor's hit a record high. The A50 index and the offshore RMB rushed high, and the world's major commodities were all red. Crude oil prices have risen sharply.

Bitcoin's positive expectations are fulfilled, and some large investors also choose to take profit and invest in other risky assets.

Secondly, Litecoin’s performance in this plunge was “bright”, and it was also due to the halving of production in August, and the good fortune was in sight.

Compared with the 2015 Wright currency halving, it also changed on July 10, and after a record high, it plummeted, from the highest point of 8.96 US dollars to a low of 2.4 US dollars when the official halved, the decline 73%. 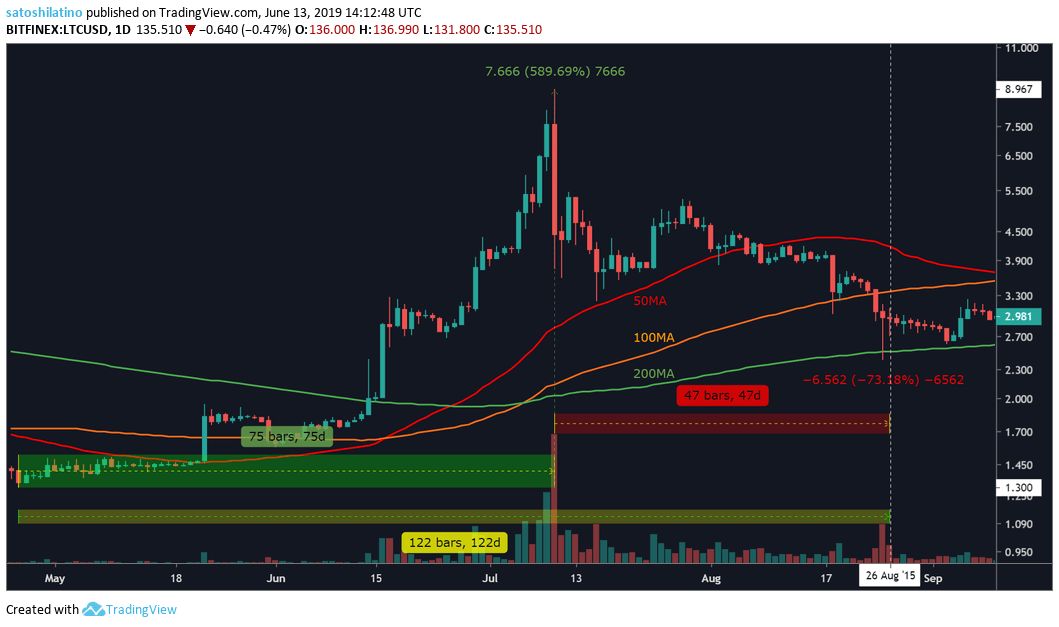 Regarding the current downturn, some analysts pointed out that 10,000 US dollars is the key barrier for Xiong Niu's competition. If it falls below, it will officially start the downturn. If it does not fall, the bull market will continue.

Today, LongHash released a message saying that since the launch in January 2009, the volatility of Bitcoin has basically been declining, but in 2019 Bitcoin did not show this trend.

Coin Metrics data also shows that the 60-day daily return volatility of Bitcoin is currently at its highest level since the beginning of 2018.

As the top spot for cryptocurrency, the performance of Bitcoin affects the trend of other mainstream currencies and altcoins, but this year there has been a strange situation in which bitcoin has risen and the altcoin does not rise or fall.

As for the altcoin, the market for bitcoin slowly increased, and the price of the coin was pushed to the high slope little by little. As a result, it fell back to a few months ago, as if it had never risen.

Looking back at the recent currency price, like a weekly roller coaster, like the Sisyphus in Greek mythology, it rises and falls back. For the money holders, especially the altcoin holders, everything must be heavy. Come again. 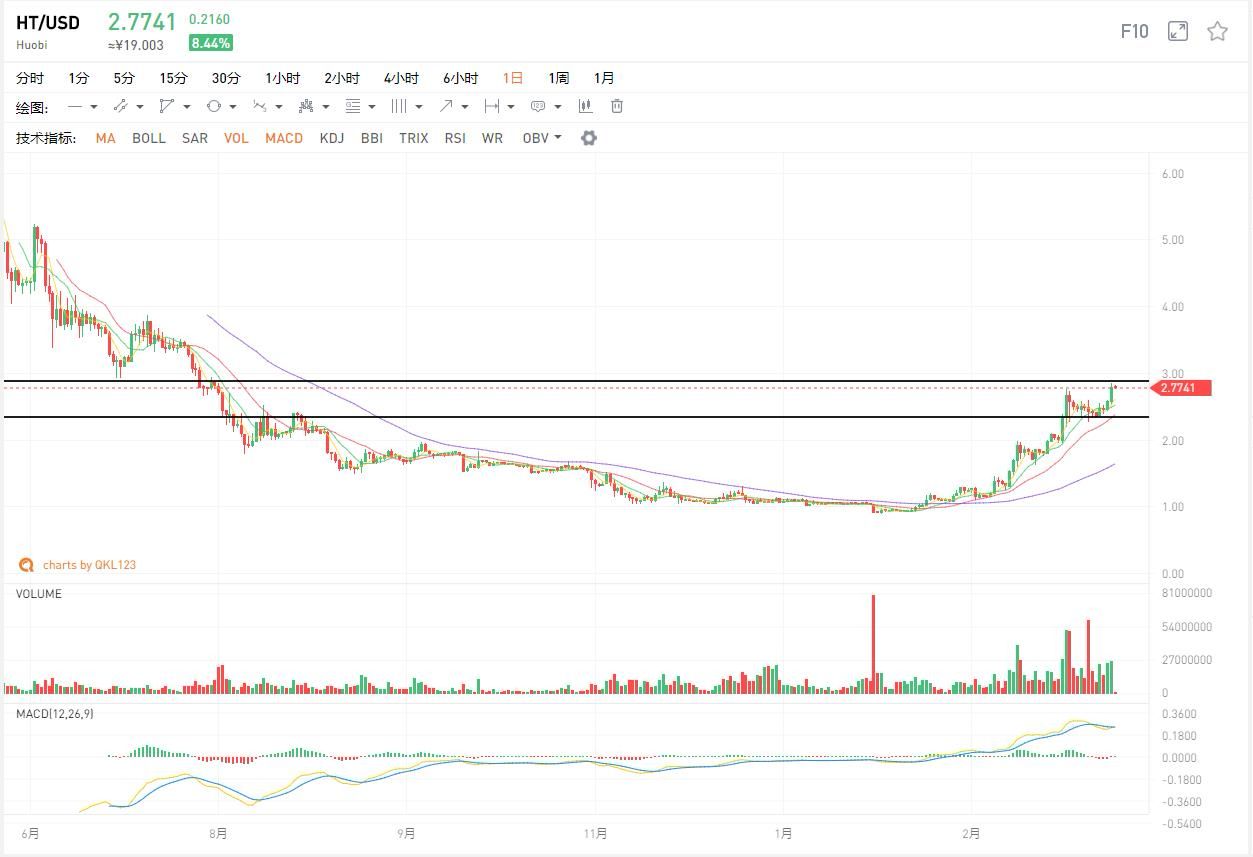