BTC began to rebound in the early morning, and the trend reached a maximum of 11,878 US dollars in the upward process. The price returned to the middle and upper rails of the Bollinger Band in the daily line. The trend was blocked near the 5-day moving average of the high point. There are signs of entering the callback trend. Now Surrounded by around $11,700, the Bollinger Band continued to maintain parallel movements, and the range of shocks also revolved around the middle of the Bollinger Band;

In the daily chart indicator, MACD continues to perform a downward-discharge posture on the 0-axis. STOCH is on the 50-level line, and the sentiment continues to increase. The RSI remains upward but the strength is not strong. Then the BTC will be followed by a shock. The upward trend, STOCH fast line wears the slow line, but the slow line has not turned heads up, then after the strong rise in the early morning, there will be a small callback behavior after the morning, after the trend rises to a high level, the trend of the callback is over.

Chen Chuchu suggested that the high-altitude and low-level should be the main ones. In the 11500-11600 US dollars, follow the multi-single and see the 11800-11900 US dollars. If you break through this area, you will continue to look up. You can hold the waiting for the upward trend and continue to proceed. The short list is recommended at 11900- The $12,000 follow-up saw $11,600. When it fell below this area, it continued to hold a low point. In the operation, it should take a good stop loss in time to prevent the unknown risk. The commander can also strive to achieve the maximum benefit; support $11,000. Resistance is $12,800. 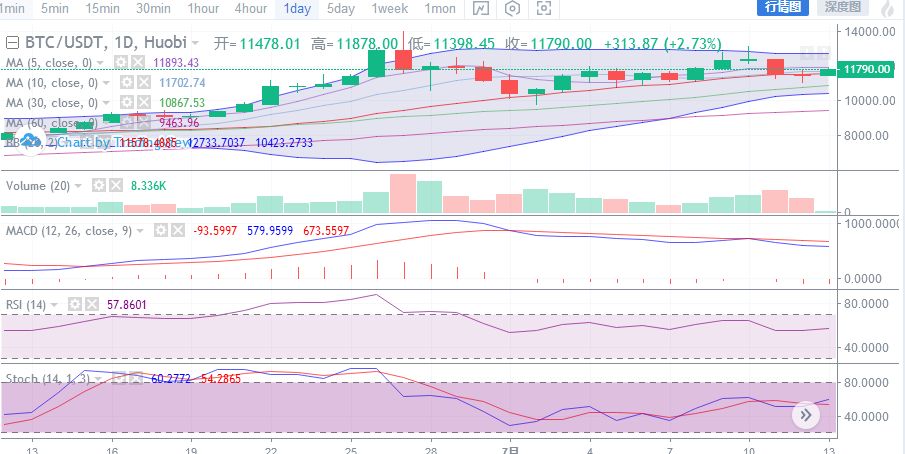 ETH Ether stabilized to $270 during the adjustment process. Now it is going up yesterday's trend. Even the rising stage is like a sideways move. The current trend continues to be bullish, follow up around $270, and quickly exit after earning revenue. Support $260 and resistance $300;

XRP Ruibo encountered a 5-day moving average during the rebound process, and there was a direct trend of the glue. The Bollinger band opened downwards, and the pressure XRP given above was difficult to have a good breakthrough. The dips could follow suit. Will also give the opportunity to enter; support $0.32, resistance $0.37; LTC Wright is also blocked at the 5-day moving average. When the price can stay at 100 US dollars, then we continue to see it as a rebound phase. The current trend can be weak. If it can break through to 110 USD, then the trend will become Strong, if it continues to sideways, then the follow-up may fall back below 100 US dollars, we need to be optimistic about the key support of 95 US dollars, follow up on dips; support 95 US dollars, resistance 120 US dollars;

BCH continues the trend of rising yesterday, and there is a posture of anti-package shadow. If it can stand at 350 US dollars, then there is a trend of power outburst. At this stage, BCH is relatively strong, and sustainable follow-up is outbreaking. Just enter, support $330, and resistance $410; 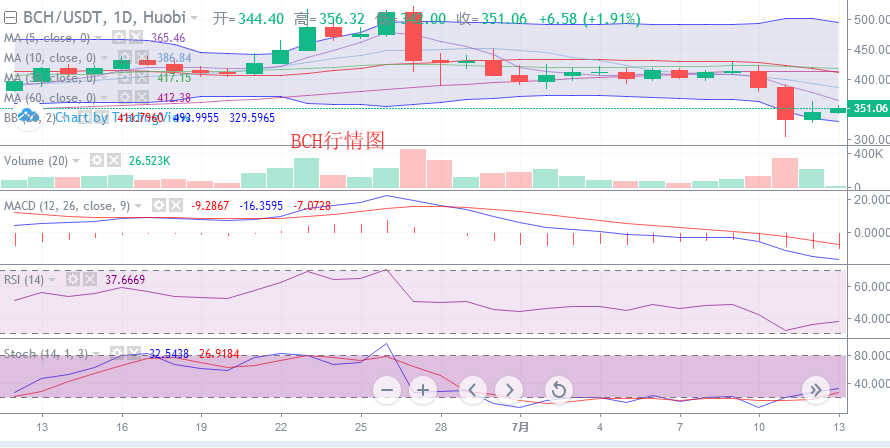 EOS rebound is not strong, but it is also considered a rebound in the previous formation. The next trend will be biased towards shock adjustment. If it can stand firm at 4.8 US dollars, the trend will remain upward and aggressive, with a high altitude and low support, supporting 4.5 USD. Resistance of 5.4 US dollars;

Craig Wright: Preparing to sue V God and others, BSV is the real bitcoin

The rumor that the central bank's digital currency is in the internal test of the Agricultural Bank, industry insiders: far from the release version

China UnionPay Zhou Wei: Blockchain is infrastructure rather than tools; UnionPay will release heavy projects in the near future