A recent article in "Hong Kong, suffocating" smashed the circle of friends.

As an observer of the blockchain industry, I take it for granted. In the area of ​​blockchain, Hong Kong has actually fallen behind Singapore, the United States, Japan and even Switzerland.

However, as the global financial center and the first stop of the mainland's sea, Hong Kong is catching up.

A number of politicians have also actively advocated to seize the opportunity of the blockchain, and even warned: "If Hong Kong loses its global virtual assets based on Hong Kong, the consequences will be more serious than the loss of Ali."

Many friends around me have been actively consulting Hong Kong and even have many pioneers.

In this dialogue, I chose Mr. Zeng Junjie, the chief operating officer of TideBit, the only legal currency exchange in Hong Kong, to try to restore the status quo of Hong Kong's digital currency investment.

He started buying bitcoin in 2013, conducted a bitcoin popularization lecture in Washington, DC, and repeatedly interviewed the South China Morning Post and Bloomberg. He can be said to be one of the opinion leaders of the Hong Kong dollar.

From the Hong Kong policy to the exchange pattern, from the current situation of Hong Kong citizens to the currency, to trading habits, this dialogue has been discussed.

For those who want to enter Hong Kong, I believe this article is a good reference.

Feng Jun: A few days ago, the media reported that there were two exchanges entering the sandbox supervision in Hong Kong. Is this true?

Zeng Junjie: I can responsibly say that no exchange has entered the regulatory sandbox. The exchanges may be just applications, but they are unlikely to have been approved. The article may be the announcement of the transaction.

Feng Jun: As far as I know, since the announcement of the sandbox regulatory policy, the industry does not seem to be active. Why?

Zeng Junjie: Because the conditions for entering the sandbox are too harsh, almost no exchange can meet the conditions, just say a few points.

And you need to prove that each of your users has 8 million Hong Kong dollars in assets. No exchange can do this in full compliance.

2. The exchange needs to insure 100% of online virtual assets (hot wallets) in the platform, and 95% of offline virtual assets (cold wallets) are insured. For example, if you have 10 billion Hong Kong dollars in your account, you need to buy insurance for 9.5 billion, and the premium is definitely expensive and expensive.

3. The Exchange needs to obtain the No. 1 and No. 7 financial licenses. This is not the most difficult thing, because as long as some money is available.

Therefore, many organizations boast of their own license resources are not the most important, but the actual compliance is the most difficult. At the moment, we have not encountered any exchange that can achieve operational compliance.

Feng Jun: Since the conditions are so harsh, how do you view the sandbox supervision launched by the Hong Kong Securities and Futures Commission?

Zeng Junjie: It is more of a framework statement, a conceptual thing, and an exploration. Sandbox supervision is to let professional investors play in the sandbox first, and see how the situation is. The CSRC will consider whether to monitor or whether to issue a license.

At present, the market has some misunderstandings about sandbox supervision. It mainly regulates the type of securities, not the tokens currently on the market.

As early as 2015, the Hong Kong Monetary Authority recognized BTC as a commodity.

In theory, most of the transactions done now are not securities passes, so there is no need to enter the sandbox. Feng Jun: Is it illegal for Hong Kong to issue currency or ICO or IEO?

Zeng Junjie: Hong Kong pursues "the law can not be forbidden." At present, there is no clear regulatory policy for the currency, as long as it is not a securities type token, it can be done less restrictively.

Of course, a project and a project specific analysis. 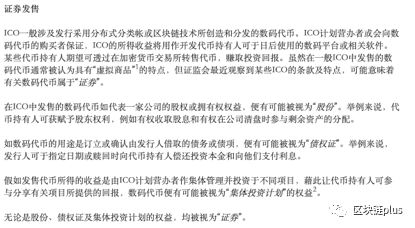 Feng Jun: According to this logic, is it not illegal to open a digital asset exchange in Hong Kong?

Zeng Junjie: Yes, there is no so-called license, and the regulatory authorities have not said that it is illegal.

In fact, it is not illegal to open exchanges, issue currency, and speculate in the sale of coins.

In 2015, the Hong Kong Financial Supervisory Authority defined tokens as virtual goods, which means that they can be traded. Then the exchange is similar to the e-commerce platform.

Only the exchange must carry out anti-money laundering, KYC, if you find suspicious transactions, you must report to the regulatory authorities in a timely manner.

Feng Jun: In reality, why are few exchanges able to land in Hong Kong?

Zeng Junjie: In fact, the main obstacle to doing digital asset trading in Hong Kong is the bank.

The bank accounts of many exchanges were blocked by banks, and many users' bank cards were also frozen. This service is provided because banks are not willing to participate in this business activity. Because they default to digital currency trading accounts, they are easily involved in money laundering, fraud or other illegal activities.

On the other hand, the account system in Hong Kong banks is inherently more complicated than the mainland. When an account is opened in Hong Kong for one month, various information is needed. These people are also used to it. If you are engaged in commercial activities, it is often necessary to provide the bank with proof of funding or other information. If the bank account or a transfer is suspended, asking the bank will only tell you that you are going to do compliance, but will not tell you which policy was specifically violated.

Feng Jun: What are the characteristics of Hong Kong citizens' speculative currency, and what is different from mainland Chinese currency people?

They are also less enthusiastic about the new concepts of industry hype, which may be related to the education they have received since childhood, with strong self-risk control.

Feng Jun: What is the age of Hong Kong currency people? What are the information acquisition channels?

Zeng Junjie: Mainly young people are mostly. However, the people of Hong Kong are more affluent, so the amount of recharge is relatively large. The per capita holding of assets is around HK$100,000. The people between 30-40 years old have the most money holding assets.

Overall, digital currency investment has not yet entered the mainstream society in Hong Kong. The general public does not feel that it is a new asset allocation.

In addition, the mainstream media in Hong Kong reported that the digital currency was demonized, and the comments of traditional economic commentators were also relatively negative. And their influence among the people of Hong Kong is still very large.

Hong Kong currency people do not believe in blockchain media, especially the kind of pull-type information, they are particularly disgusted.

Feng Jun: Do Hong Kong people buy BTC and other mainstream currencies to hold the currency, or will they carry out more operations?

Zeng Junjie: Most of them do not hold the money. However, we also see that many citizens buy coins in our TideBit currency and then go to other platforms to buy small currencies and make currency transactions.

From our background data, it is the most to withdraw coins to the currency.

We think this is also very good, TideBit is equivalent to an incremental capital entry.

Feng Jun: Is there a local currency project in Hong Kong? Why is it rarely heard?

Zeng Junjie: There are relatively few local currency projects in Hong Kong. Because there is no audience, the local citizens have a very low level of participation. They do not believe in the CX model.

Like several projects that were previously issued by the currency, they were transferred to Taiwan and Japan because they did not have an audience.

Many blockchain meetings were held in Hong Kong, but participants estimated that only 10% of them were locals in Hong Kong.

Feng Jun: But there are still many mainland projects that want to go to Hong Kong. Why is this?

Zeng Junjie: After all , Hong Kong is a global financial center and the gateway to the mainland's reform and opening up. It has gathered global financial talents, and its policies are open, and it is more convenient to set up companies and engage in financing.

In particular, after the mainland's "9.4" policy was promulgated, almost all mainland projects began to be risk-isolated and moved core personnel to Hong Kong.

Therefore, the current status quo is that Hong Kong has a large number of digital currency practitioners, and its influence in the world cannot be underestimated.

I personally think that Hong Kong is very likely to become one of the global blockchain financial centers.

Source: Blockchain plus, Babbitt is authorized to reprint, some have been deleted.

What does the Hong Kong…

IEO re-burns the ring of rich dreams, how long can the dozens of income myths go?