Let me want to talk about the cause of this incident. A few days ago, there was a report that Canadian natural gas companies are now using a large amount of retained natural gas to exploit bitcoin, creating a useful use for these illiquid energy sources. These gases, if not used effectively, will burn into the atmosphere.

In addition, I saw this news a few days ago: 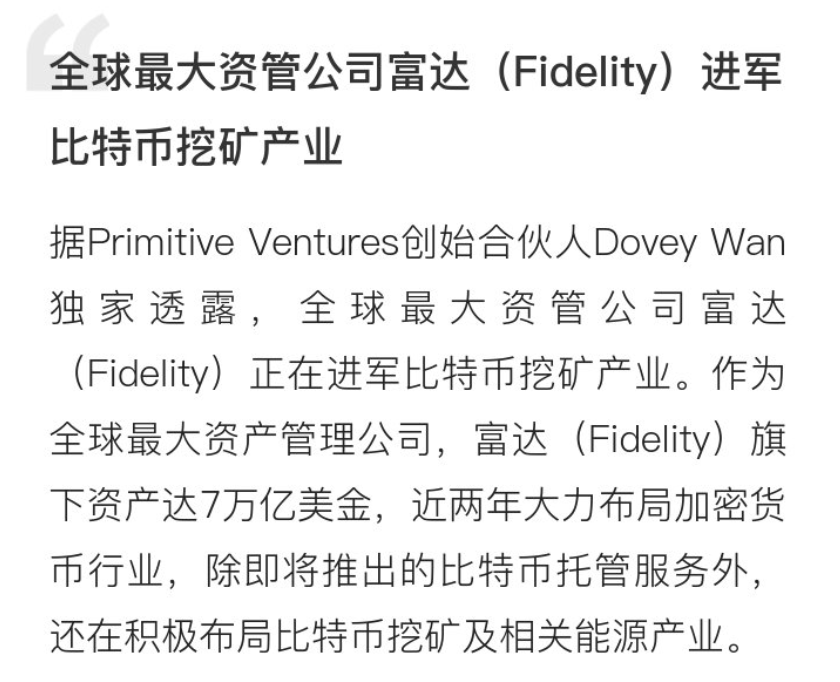 Fidelity is a big company and it is very famous in the investment field. Why did he look at the "backward industry" that we can't see?

(The “stalk” of backward industries comes from a proposal drafted by the Development and Reform Commission some time ago, in which “virtual currency mining” is listed as a phase-out industry.

Although it caused a lot of sorrow at the time, it also caused a lot of discussion, but the follow-up development also proved that this incident did not have any special impact on the mining business.

However, it is very interesting that everyone has been a joke in the domestic storm, but it has caused controversy and panic in foreign countries. Many people worry that this is the sign that China ZF intends to start cracking on bitcoin mining. Sex news…

Facts have proved that there is not only a large information asymmetry in overseas and domestic, but also huge information asymmetry in China and overseas. Due to the public opinion propaganda throughout the year, many foreigners actually have the same concept of the ZF of the Tian Dynasty and the three fats of the next home. Plus China has a large number of mines and mining machines. If something really happens, it will easily lead to bitcoin prices. The avalanches, so they are particularly worried about what we have to say.

Then the wind has passed, let’s look back and see if the business of mining is a good business.

Especially for large companies that don't know Bitcoin but want to enter the industry.

If there is anything in the world of cryptocurrencies that big companies in the traditional industry and big companies can understand and feel that this business can do, perhaps only mining and opening exchanges. Because these two are the industries that are the easiest to understand for profit models and cost/risk control, mining is a business that is more prone to cash flow and has no legal risk than open exchanges.

Other businesses in the currency circle, whether it is doing media, doing projects, doing incubators, or doing capital, actually have no fixed profit model, because the source of cryptocurrency does not think of any profit model. If you are working on a project, why you should be able to explain the currency, not to mention why your currency is worthwhile, and why your currency is getting more and more valuable.

Mining is not the same. Mining business can be easily understood as doing one thing: looking for the cheapest energy possible around the world, and then turning it into a dollar through a mining machine.

Although the mining machine represents computing power, it represents the most powerful guardian of Bitcoin world, representing the beauty of mathematics… But for mining businessmen, this is simply turning "electricity" into "money". Just about it.

And when the profit margin of bitcoin mining is getting smaller and smaller, many small countries overseas will also cost new mining paradise, the cost is not the lowest, only lower.

An important factor in meeting the “very low energy price” condition is that this energy is “excessive resources” in the local area. Just like you can't build a mine in a place like Beishangguangshen, only in places with excess electricity, the price can be cheap, and use these resources that would have been "wasted" to mine and turn these energy sources into A real US dollar, how good is this business?

After the reform and opening up, there was almost no foreign exchange reserves in China at that time. So one thing that everyone was very popular at that time was "exports to earn foreign exchange." Who can sell domestic things abroad and turn them into dollars, which is a great person. . Of course, after entering the WTO, China’s foreign exchange reserves soared to the point that it was once questioned as “too much reserves”, but for many small countries, especially those with excess energy, they are currently doing this. Can be very interested. Many places are suffering from nothing in the country that can be "sold".

Having said that, what kind of business is mining? I think it should be the only business in the world of cryptocurrencies that can be "quantified".

When you invest in cryptocurrency, only the mining business allows you to calculate how much time and time you will invest, how much cash flow returns per day, and the risk is controllable, there is no team running, funds Freezing, lawyer's letter warning and other risks, and after investing in the mining business, it is also a currency.

For the big guys and big companies, this is a good business, isn't it?

In addition, there are many places in the world that, like Canada at the beginning, have a lot of "abandoned energy". Of course, the waste here is not necessarily abandoned, and some may be "wasted", such as during the wet season. Like hydropower, it is used to maintain the Bitcoin network and become "waste" as a treasure. Isn't it good?

Analysis: Bitcoin premium is mainly due to inefficient market and lack of cash channels

TokenInsight Mining Report: With the increase of computing power, low-power mining machines will gradually establish advantages in the competition