In the Trump era, the Fed has given up the usual road map, the current stock market is hitting record highs, and layoffs and unemployment are at a 50-year low, nevertheless, in the Trump era, these are not Importantly, it is important that the president is coercing the Fed to cut interest rates, and he is likely to get what he wants. Although China’s economic data in June far exceeded expectations, it eased the market’s worries about the global economic slowdown and suppressed spot gold prices. However, it was constrained by the Fed’s expectation of a rate cut this month, and speculation that the US Treasury may intervene in the foreign exchange market. The US dollar index is still on the defensive, which in turn limits the decline in gold prices.

A closer comparison will reveal that Bitcoin's current trend is similar to that of gold. At present, both are consolidating at a high level. Under the influence of interest rate cuts, gold is difficult to fall. Therefore, bitcoin as a digital gold may not fall. It will be very deep, unless the main force gives up the logic of trying to hook up with the hedging in the near future, otherwise in the context of this logic, the two will continue to move in the opposite direction. At present, the mainstream cryptocurrency has broken down except for Bitcoin. This shows that the current new funds only recognize Bitcoin. The remaining currencies do not have too many opportunities for the time being, and they need to wait patiently. BTC BTC ushered in a rebound yesterday, and the rebound was also good. It has rebounded to more than half of the previous Yinxian, and the rest of the mainstream has followed the rebound. In all major currencies, there is only BTC in the real sense. Broken, the rest have been broken, and the BTC rebounded to 5 antennas and will no longer attack upwards. The 5 antennas still form a certain pressure on the price of the currency. Observe whether the target can withstand the pressure of 5 antennas. If it can maintain a shock consolidation above $10,500, the probability of continuing to rebound upwards is too high. If it falls again by $10,500, it will continue to bottom out. It is expected to stop falling around $8,900-9000. Pay attention to risks and participate carefully. . 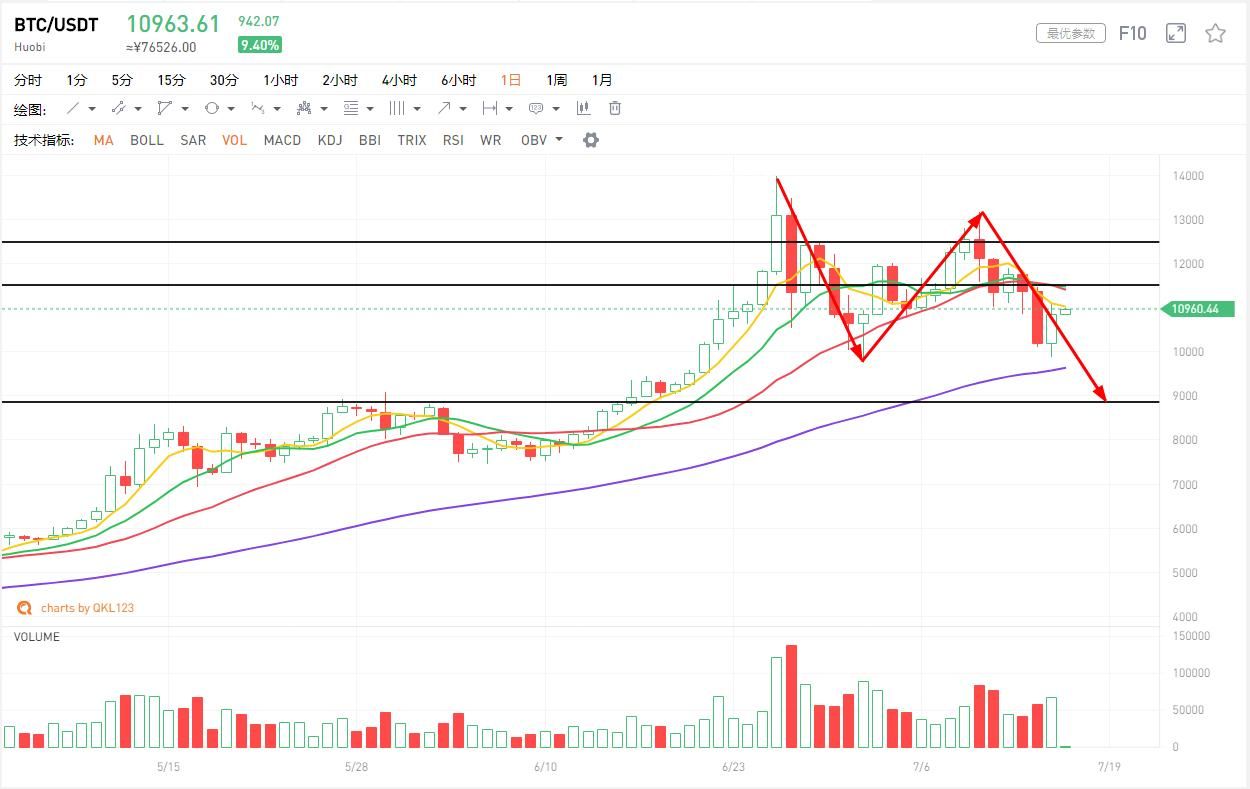 ETH We have been emphasizing ETH's very weak position. At present, we can also see from its decline that the target c wave has gone down 1.318 times, hitting 360 antennas and starting to come back, forming a single-needle bottoming trend. Again, if the BTC can't stabilize, the single-needle bottoming trend may not be reliable, and the market will still have iterative, but I personally think that the short-term bottom has been basically proved, just around $200, and then Seeing how the target will rebound, BTC can not successfully stop falling, the rest of the target is also difficult to form the bottom form, cautiously involved in bargain-hunting. 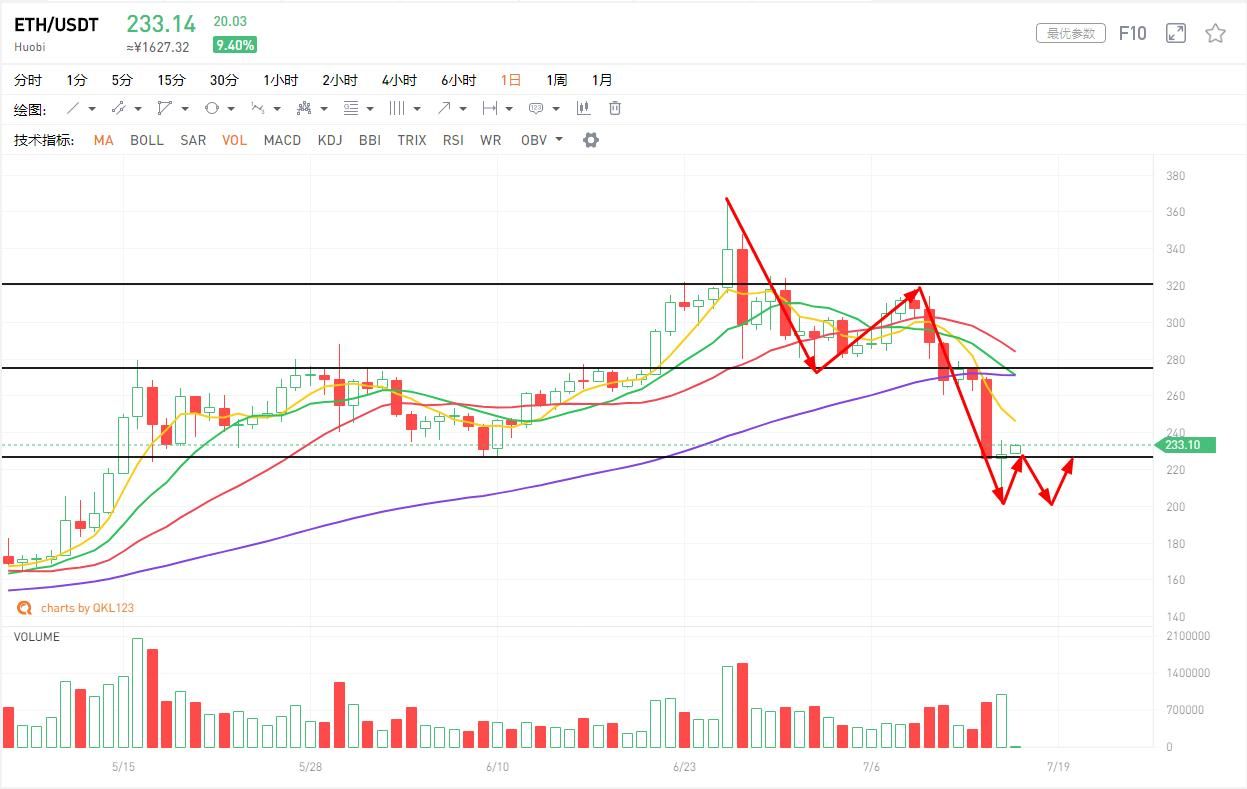 LTC LTC has no story to tell in the short term. The falling volume continues to shrink. The investor's participation is not high. It has already fallen below the important support level of 100 US dollars. The moving average system has formed a short position, and the macd is distributed below the zero axis. The trend is bearish. 5 antennas are still pressing down quickly, there is no stop signal, and you have to wait patiently. The target will be rewarded next. If the market has been going down before the production is reduced, then at the time of production reduction, The target should have a decent rebound, but I personally believe that the value of the target participation is not very large, only as a reference for market strength. BNB We believe that the mid-term adjustment of BNB has arrived. The target moving average system has been short-sorted, the macd indicator has also fallen below the zero axis, the price of the currency has hit the boll lower rail position, and the boll line has turned downward. Signs, in the short term may pull back a strong pressure of 30 US dollars, personally think that the point will not be effectively broken, the current target has formed a new decline channel, in the short term may be adjusted downward along the decline channel, when derailed us Then judge the direction of the target, the medium-term adjustment is the main focus, pay attention to risk. 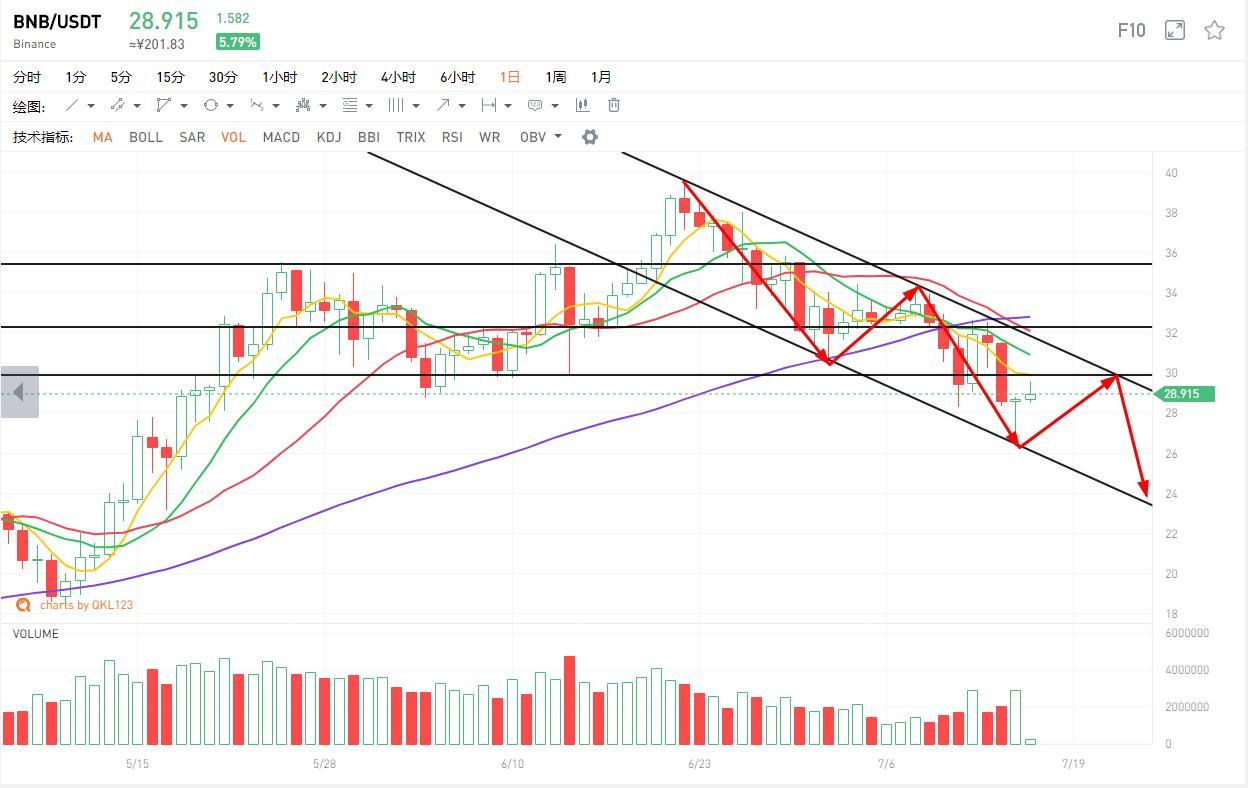 Free and Easy Weekly Review | The strongest shield of privacy is threatened, how can the blockchain resist side channel attacks?