Government affairs have become the main scene for the application of blockchain.

This data is the result of the efforts of many provinces and cities in China to promote the development of blockchain government applications.

Among them, Xiong'an and Foshan are tied for C. 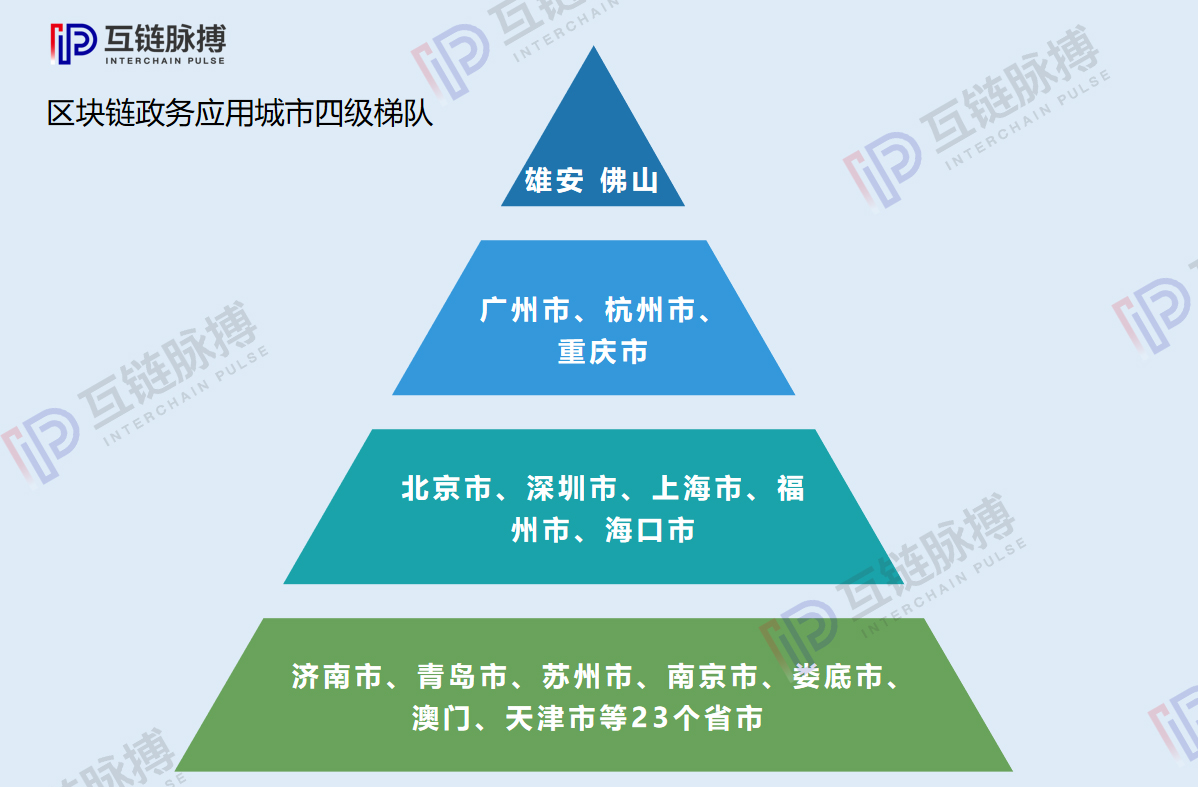 According to the incomplete statistics of the inter-chain pulse, there are 9 blockchain government applications in Foshan City, Guangdong Province and Xiong'an New District of Hebei Province, respectively, and they are ranked as the first development team of blockchain government.

As a new city, Xiong'an is regarded as an important infrastructure from the beginning of urban construction. Therefore, its blockchain layout has also formed a relatively complete system, from fund management to project management and control, from land to house leasing, all links have blockchain technology intervention.

Mutual chain pulse statistics, since the end of 2017, Xiong'an has launched and landed 9 blockchain applications around the government sector. It is worth noting that, unlike other provinces and cities, there are three government applications that use the incentive characteristics of blockchain technology.

Xiong'an Future Personal Credit System will be implemented in a blockchain manner to reward the good performance of the market.

The resulting project is a smart garbage collector based on blockchain technology. The public can download the APP and dump the garbage after scanning the code. The built-in system of the garbage can give the garbage deliverer points reward according to the type and weight of the garbage. All the points can be exchanged for life through the service system in the new district in the future. Supplies, etc.

In addition to incentives, Xiong'an's main application type is regulatory traceability, which is relatively focused on the supervision and tracking of financial flows during project construction.

The “Millennium Xiulin” project also uses blockchain technology to extend the payment chain for afforestation funds to the end of payment. The payment for engineering and labor services is completed on the chain, and the financial transfer is regulated and necessary. Tracking; applying blockchain technology in the “Xiong'an Demolition and Resettlement Fund Management Blockchain Platform” to realize the whole process chain management of the original demolition and relocation and capital transvestment; China Communications International Airport The “blockchain-supply chain” subcontractor financing business of the first phase of the interception flood channel in Chengrong East Area is also the use of blockchain technology for regulatory traceability.

Inter-chain pulse observation, Foshan's government applications are more concentrated in the field of people's livelihood, the specific application is widely distributed in the medical, food, industrial and other industries. Among the nine applications of inter-chain pulse statistics, there are early landings and relatively mature scales; there are also trial operation projects that have just been launched recently.

Among them, the IMI digital identity platform was launched in June 2017, and currently has more than 1.3 million users. The platform is a smart multi-functional identity authentication platform built on the underlying technology of the blockchain. The public can conduct business such as provident fund inquiry, traffic violation inquiry, and water and gas gas fee inquiry through the platform. Pangu Health Platform, Yunwutong and other people's livelihood service platforms are also combined with this platform.

The “blockchain+food traceability” platform in Chancheng District was initially completed at the end of June this year. It is reported that the next step will be to select the students' most concerned catering course, and use the relatively closed-loop management of pork as a trace source to carry out project trial operation.

In the “blockchain+shared community” project, the blockchain technology publishes the resources that residents can share and the required service information on the platform, further realizing the intelligent docking of “requirements list” and “service list”.

Mutual chain pulse observation, the second echelon city application service is mostly government agencies, accounting for 55.5% of the total number of entities such as enterprises and the public; the application types are mostly data storage, followed by data sharing.

Most of the six blockchain government applications in Guangzhou, Guangdong Province have been well known to the public, such as the “arbitration chain” and “tax chain” platform in Guangzhou, and the “netcom law chain” of the Guangzhou Internet Court. In addition to these items, Guangdong Province has also recently tried to introduce more blockchain government applications.

In June 2018, Yuzhong District of Chongqing launched the information platform for the establishment of the Wisdom Party. In August of the same year, the “blockchain” model was adopted to establish the management system for the main quality credit of trading ports. In January 2019, the use of blockchain technology for food and medicine Regulatory tracing; in June 2019, Chongqing enterprises using blockchain construction launched an online service platform; in June, Chongqing’s blockchain government service platform in cooperation with Alipay was launched.

The city of the third echelon is slightly unexpected. There are 5 cities in Beijing, Shenzhen, Shanghai, Fuzhou and Haikou. The number of applications in each city's administrative blockchain is 2 or 3.

According to the statistics of inter-chain pulse, the application of blockchain technology in Beijing, Shenzhen and Shanghai is not as much as imagined. 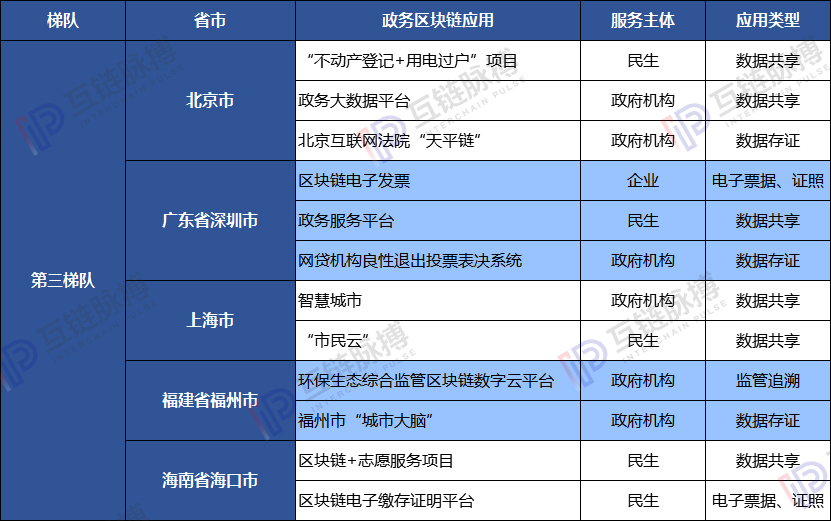 There are three applications for the Beijing blockchain government, the “balance chain” of the Beijing Internet Court and the two projects launched and landed this year.

In April 2019, Haidian District took the lead in launching the “Real Estate Registration + Electricity Transfer” project in the city, and fully promoted the application of blockchain technology in the registration scenario. In May, the data of the Municipal Public Security Bureau and the Civil Affairs Bureau was completed, and the blockchain technology officially launched external services in the Beijing stock market transaction scenario.

In April 2019, the Beijing Development Zone conducted a public tender for the government affairs big data platform project based on the blockchain development zone. In June news, the platform will be officially put into use before the end of the year. The platform will be based on the asymmetric encryption features of data sharing switching platform products and blockchain technology, and integrate cloud, network, number, chain, and intelligence related technologies to build a "smart chain overpass."

Compared with Beijing and Shenzhen, Shanghai has fewer applications in the blockchain government sector, with a total of two. First, in March 2019, Shanghai Yangpu District Science and Technology Committee promoted the construction of smart cities. Yangpu District actively explored the Internet of Things blockchain technology in accordance with the strategic deployment of “Building a New Smart City Pilot Zone”. Second, in April 2019, Shanghai “Citizen Cloud” users exceeded 10 million, and Shanghai began to explore the use of blockchain thinking to solve public service problems.

In January 2019, Fuzhou City, Fujian Province cooperated with Bittland to use the blockchain technology to jointly create the “urban brain” of Fuzhou; in May 2019, Yongtai County of Fuzhou passed the construction of an environmentally-friendly ecological comprehensive supervision blockchain elastic digital cloud platform. It has realized the use of information technology to help comprehensive ecological management.

The fourth echelon: application landing is concentrated in 2018 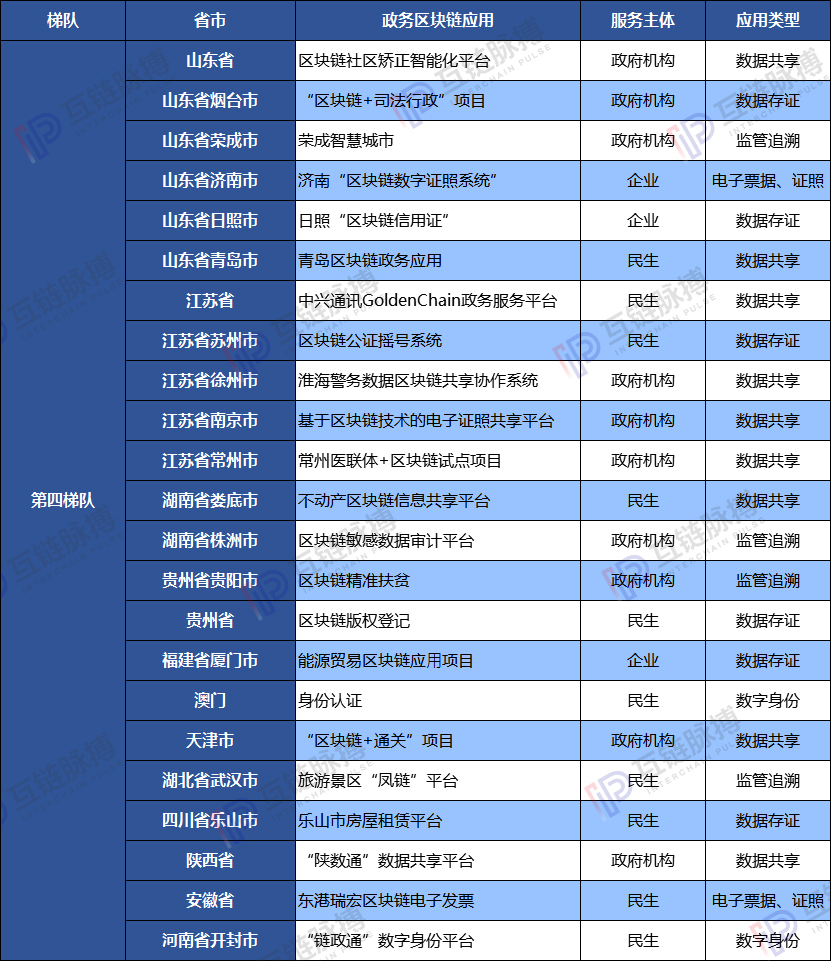 In May 2018, Qingdao North District began to explore the application of blockchain in government affairs. Specifically, it is to “go up the chain” of the government business and realize the “zero errands” and “paperless” handling of the citizens.

In June of the same year, Jinan City proposed to deepen the reform of “one-time implementation”. The “Enterprise Start-up” system was successfully launched, and the first digital business license for storage and transmission in the blockchain in Shandong Province was born; the first blockchain credit in Shandong Province was opened in Rizhao; Yantai City, Shandong Province explored The realization form of “blockchain+judicial administration” promotes the application of “blockchain” technology in the field of judicial administration such as community correction, notarization and judicial appraisal.

In September, the Rongcheng Municipal Government of Shandong Province cooperated with enterprises to create a blockchain smart city platform, which is widely used in many projects and components of Rongcheng Smart City.

The blockchain government project in Jiangsu Province was launched earlier. In August 2017, Changzhou City and Ali Health Cooperative Medical Link + Blockchain pilot project. Since then, related applications have been launched in the field of police and electronic licenses.

In addition, there are two places in Loudi City and Zhuzhou City in Hunan Province to launch blockchain government applications.

The application of Macao and Tianjin is achieved this year.

In February 2019, the Macau Science and Technology Development Fund established by the Macau government signed a cooperation agreement with Weizhong Bank. The first project of cooperation between the two parties will be based on the “WeIdentity” entity identity authentication and trusted data exchange solution.

In April 2019, the Tianjin Port Block Chain Verification Pilot Project was put into trial operation, and for the first time in the country, the deep integration of transaction, finance, logistics, and supervision in blockchain technology and cross-border trade was realized.

While counting the number of government applications in blockchains in various provinces and cities, the inter-chain pulse has analyzed the above 71 applications from the perspective of the main features of the application service and the technical characteristics of the blockchain used by the application. 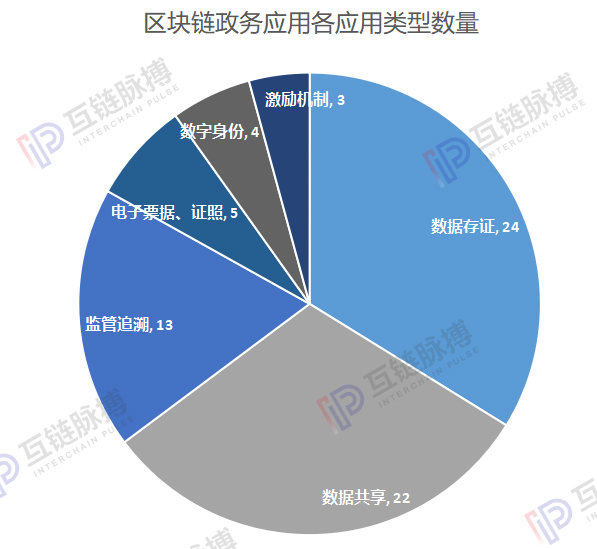 Not only the main body of the application service, but also the type of application, the fields in which statistics are applied are more extensive.

Among them, the more common areas are the judicial field, such as the “Tianping Chain” of the Beijing Internet Court, the Hangzhou Judicial Block Chain in Zhejiang Province, the “Netcom Law Chain” of the Guangzhou Internet Court, and the “Block Chain + Judicature of Yantai City, Shandong Province”. The “administration” project belongs to this field.

Statistics on the application of blockchain administration in various provinces and cities:

Ross Ulbricht, the founder of the Dark Silk Road, has a petition of 195,000 people.

Ethereum co-founder Gavin Wood: Privacy is a core part of the Web3 movement