Libra delays launch or is a foregone conclusion, bitcoin market outlook will continue to fall 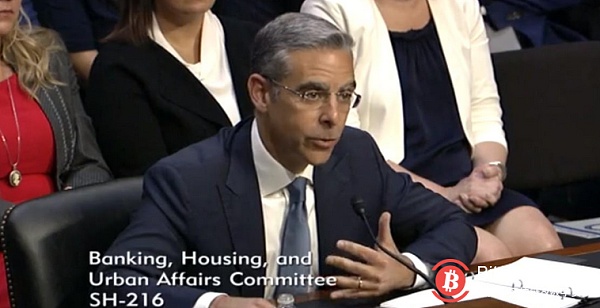 First, Marcus said that it will fully cooperate with regulators in the US and around the world before the official launch of Libra, and will not evade any supervision. After that, Marcus reiterated that Libra will not be launched unless the regulator is satisfied.

In addition, for Libra to choose Switzerland as its headquarters, Marcus said that Switzerland was chosen as the headquarters because the WTO and the Bank for International Settlements are there, and Libra is also registered with the US Financial Crime and Law Enforcement Network (FinCEN).

Marcus also said that Libra not only has KYC and e-mail authentication procedures, but also has a complete certification process, and users need the ID given by the government when opening Libra accounts, in order to anti-money laundering and counter-terrorism financing.

Although Marcus showed his strong desire to survive at the hearing, it ended up losing about personal data privacy.

In response to a number of lawmakers' comments about Facebook's previous disclosure of data privacy, Marcus said that Libra will separate social information from financial information when processing user information, and will also give users other payment options, including credit cards and other options. wallet.

Marcus’s response was echoed by Sherrod Brown, the Democratic vice chairman of the Housing and Urban Affairs Committee: “You don’t want to tell me these things, Facebook abuses the trust of users, and was recently fined $5 billion. I believe you?"

For this Libra conference, CoinNess analyst Gary made a brief comment, saying: "Marcus is fully aware of the seriousness of the supervision. In order for Libra to advance smoothly, all the points that may touch the regulatory red line are all considered, including staying away. Monetary policy, anti-money laundering, etc., all the words of Marcus are very cautious. In the face of the senator's questions and doubts, they all adopt the statement of accepting and accepting the other's attitude first, and then try to be as compliant as possible, and the desire for survival is extremely strong. In terms of personal privacy, Libra still has many obstacles on the road to advancement due to Facebook's predecessor."

Of course, as much as Marcus is uncomfortable, there are many digital currency investors.

Earlier this morning, shortly before the end of the hearing, Bitcoin began to plummet, falling from a minimum of $10,500 to $9,350, and a short-term plunge of more than 10%, which led to a general decline in the market, with ETH falling 13% and LTC falling 14 EOS. The worst, short-term plunging more than 20%. 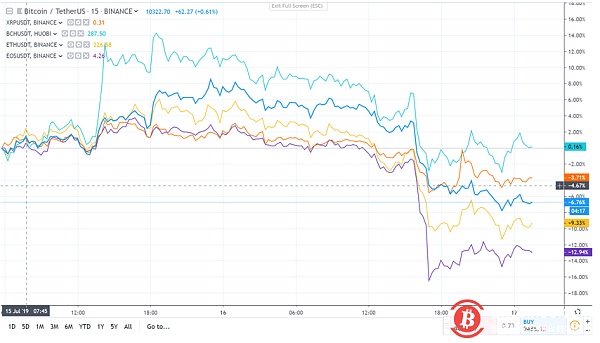 Because the market's general decline and Libra's time point have a high return, many people believe that the reason for the decline in Bitcoin is caused by it. "What caused bitcoin to rise will eventually lead to its decline."

However, in a market that is in a downward trend, there is no market crash due to a single cause, mostly because of the combination of multiple factors.

CoinNess analyst Arthur believes that on the one hand, due to the global response to FATF regulatory requirements, the running funds have a strong liquidation requirement, and on the other hand, the bitcoin is caused by the FOMO sentiment after falling below 10,000. ”

The cryptocurrency analyst Counter said that from a technical point of view, the double-top form of Bitcoin means that it will continue to call back in a short period of time, so it is still a normal callback interval. Libra’s hearing is indeed to a certain extent. It will affect, but it is not important.

The insiders said that this round of slump is to some extent a bearish main force that this point does not have strong and effective support, so it is violently pierced with bad news.

According to The block, although the assets managed by the Gray Bitcoin Trust (GBTC) reached an all-time high of $2.8 billion, the bitcoin inflow (the number of bitcoins held by GBTC) is hitting a low point. Indicates a decline in institutional interest.

The current GBPC premium is about 30% and has started to decline, indicating a shift in market sentiment. GBTC is a closed-end fund that invests in Bitcoin and may be the best indicator for institutions to invest in Bitcoin.

Analyst Counter said that under this trend, it is expected that there will be further risk of further correction, and then enter the turbulent space, investors should not blindly see more or bearish when the disk is not clear.

In response, CoinNess analyst Arthur agreed that “the short- and medium-term corrections have basically taken shape and investors should be cautious.”

One thing to be reminded is that at 10 o'clock in the evening, Libra will usher in a second hearing, and the hearing will be held by the House Financial Services Committee with the theme of "Reviewing Facebook's proposed cryptocurrency and its contribution to consumers and investors." And the impact of the US financial system, including its financial services committee chairman Maxine Waters and vice chairman Carolyn B. Maloney have a negative attitude towards Libra, but earlier called for the prevention of Libra.

Therefore, for Marcus, there will be another fierce battle this evening, and the results of this hearing will once again affect the digital currency market. (Coin World)

The study shows that in the first half of the year, 27 policies in 13 provinces and cities involved blockchains, and more “one-off”, special policies are still lacking.