With the rise of the market value of crypto assets and the increasing attention of global capital, governments have not only introduced relevant policies to regulate the encryption market, but also explored and practiced the underlying technologies in cryptographic assets. Since 2016, the Monetary Authority of Singapore (MAS), the Singapore Central Bank, and the Singapore Exchange, 10 commercial banks, 8 technology companies and 6 academic institutions have jointly launched Project Ubin to explore the distribution. The practical application of Distributed Ledger Technology (DLT) in clearing and settlement.

From 2016 to the present, Project Ubin has released a total of four reports, namely Project Ubin based on distributed ledger-based SGD , Project Ubin: Refactoring RTGS , Project Ubin: DLTP-based payment for DLT. Cross-border Interbank Payments and Settlement: New Opportunities for Digital Transformation . Each report includes, but is not limited to, an introduction to the problem that the project needs to address, the rule design of the prototype, the impact of the prototype on the real world, and the issues that need to be considered in the future when the project is further refined. Project Ubin's overall research level is progressive, and its overall planning is six stages, namely SGD Singapore Singapore legal currency digital exploration, domestic interbank settlement exploration, DLT-based DvP exploration, cross-border interbank payment settlement exploration, target operation mode and DvP exploration for cross-border payment settlement. Project Ubin is currently in the fourth phase, which is cross-border interbank payment and settlement.

This article was compiled and adapted from the contents of the above four reports published by Project Ubin. Try to summarize the contents and results of the first four stages of Project Ubin. Stage 1 and Stage 2, see Project Ubin: The Singapore Central Bank's Attempt to Apply DLT in Clearing Settlement ( Part 1 ) .

Phase 3: DLV based on DLT

On August 24, 2018, MAS and SGX announced plans to implement DvP settlement of two types of certified assets across different blockchain platforms (distributed ledgers), exploring the final confirmation of DvP settlement, interoperability between books and accounts. Investor protection and propose future considerations for DvP on the DLT and its impact on the capital market. The two types of certified assets are the Central Digital Currency issued by MAS issued by Singapore Government Securities (SGS) and MAS, namely the SGD in digital form.

The current MEPS+ is an RTGS system implemented and operated by MAS and consists of two systems: MEPS+-SGS system and MEPS+-IFT system (MEPS+ interbank transfer system). The MEPS+-SGS system handles the paperless settlement of SGS issued by MAS on the basis of DvP. The MEPS+-IFT system supports large interbank fund transfers denominated in SGD. Market participants must register separately in the MAS's two systems to trade. The MAS-SGS Committee acts as an arbitration party to resolve disputes. There are several problems with the existing DvP MEPS+ system. In terms of system risk, there is a single point of failure risk in the traditional settlement system. All participating banks that need settlement services must connect to the central operator (RMO, including clearing house and central bank) to settle their transactions; In time, MEPS + runs in a fixed running time. According to current industry practice, the clearing and settlement cycle is T+2 or T+3; in terms of supervision, additional processes, manpower and financial resources are required to ensure clearing settlement compliance, supervision It takes years for an organization to adjust the rules of the financial services industry, especially regulatory changes, compliance standards changes, and system upgrades. The above picture shows a prototype of an application-free blockchain system proposed by Anquan, Deloitte and Nasdaq. The prototype implements functions such as expanding the time window, locking the cash/securities contract on the ledger, controlling the account by the arbitrator, encrypting and transmitting information under the chain to ensure privacy.

Phase 3 explores the rules of embedding compliance requirements in smart contracts to achieve compression of the settlement cycle from T+3 to T+1 or even full-time settlement. Due to the diversity of regulatory review and compliance standards, smart contracts embedded with compliance rules may affect multi-regional enforcement of financial regulatory authorities. In addition, the contract locks the assets to be traded in the cash ledger and the securities ledger, which may reduce liquidity during the settlement period.

Bank of Canada (BoC), Bank of England (BoE) and the Monetary Authority of Singapore jointly released the report “Cross-border Interbank Payments and Settlement: New Opportunities for Digital Transformation” on November 15, 2018. The report looks at large payments, such as personal payments to individuals for overseas payments and other low payments. 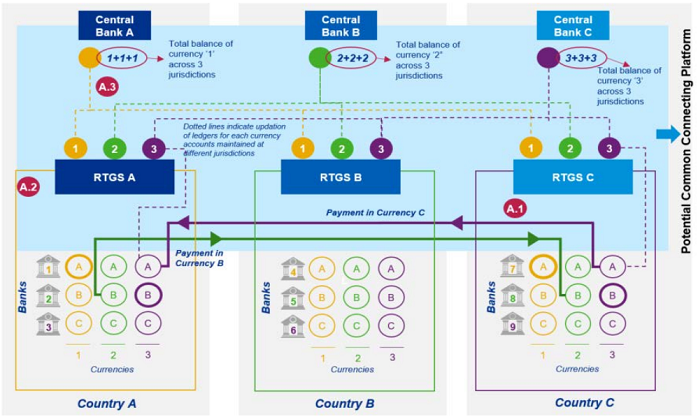 Models 3a, 3b, and 3c are based on cross-border payment settlement between banks using W-CBDC (Wholesale – Central Bank Digital Currency), depending on the holding and trading range of W-CBDC. There are a few differences between the three modes.

In model 3c, a single generic W-CBDC supported by a series of currencies is issued. Several participating jurisdictions have established a “universal” wholesale CBDC (Universal – Wholesale – CBDC, UW-CBDC) through their respective central banks or globally diverse institutions. The UW-CBDC will be supported by a range of currencies issued by participating central banks. The UW-CBDC will be issued through a specially established exchange to allow the issuance and redemption of such UW-CBDCs. Converting a jurisdictional currency to UW-CBDC will generate an exchange rate between that currency and UW-CBDC. The framework for how to manage needs to be determined jointly by the participating central banks.

Phase 4 provides a reference for further analysis of these potential future models. In the future, it is also necessary to consider legal and regulatory requirements and risks, the cross-jurisdictional governance structure required under the unified standards, the impact on monetary policy and central bank-led monetary policy, the legislative needs of W-CBDC, and the formulation of eligibility criteria for direct participants.

Summary of this article

The Blockchain Research Center of the Institute of Financial Science and Technology of Tsinghua University will continue to track and study the progress of central bank CBDC.

"Safety Blockchain White Paper" was launched, and blockchain application was implemented in 14 scenarios.