Trump once again threatened to impose tariffs on China. Due to the fear of trade wars, gold once again rose, just a stone's throw from the new height. The Group of Seven (G7) finance ministers and central bank governors meeting was held in France. Libra was greeted by the finance ministers and central bank governors at the G7 summit, saying that they must respect the rules of anti-money laundering and terrorist financing and ensure that they The security of transactions and user data, the finance ministers of the seven countries "have reached a great consensus on the need for rapid action on the digital currency issue." Libra's second hearing was a bit warm, and the vice chairman of the financial committee said that it is impossible to stifle innovation because it does not understand innovation. This is a relatively pertinent statement, and the release of libra may be only a matter of time.

The bearish and positive exchanges alternated. BTC hit a minimum of $9055 last night, and then began to pick up. The highest price would rise to $9950. It did not successfully stand at the integer mark of $10,000. The current price is around $9623. I personally think that the current news faces The impact of the target is weakening. This round of stop-and-go action may follow the trend of gold. If gold hits a new high again, will the target follow? First of all, gold has been consolidating at a high level recently, and there has not been a deep downswing. In contrast, BTC has stepped out of the trend of step by step. Currently, it is an N-shaped structure. Personally, the bottom of the short-term bottom has been basically proved, and the bottom is not Formed in a day, so there is no need to enter the market near the 9000, there is no need to worry, but also repeatedly test the effectiveness of the support of the point, I personally think that the support is still effective, patiently waiting for the formation of the bottom of the target. 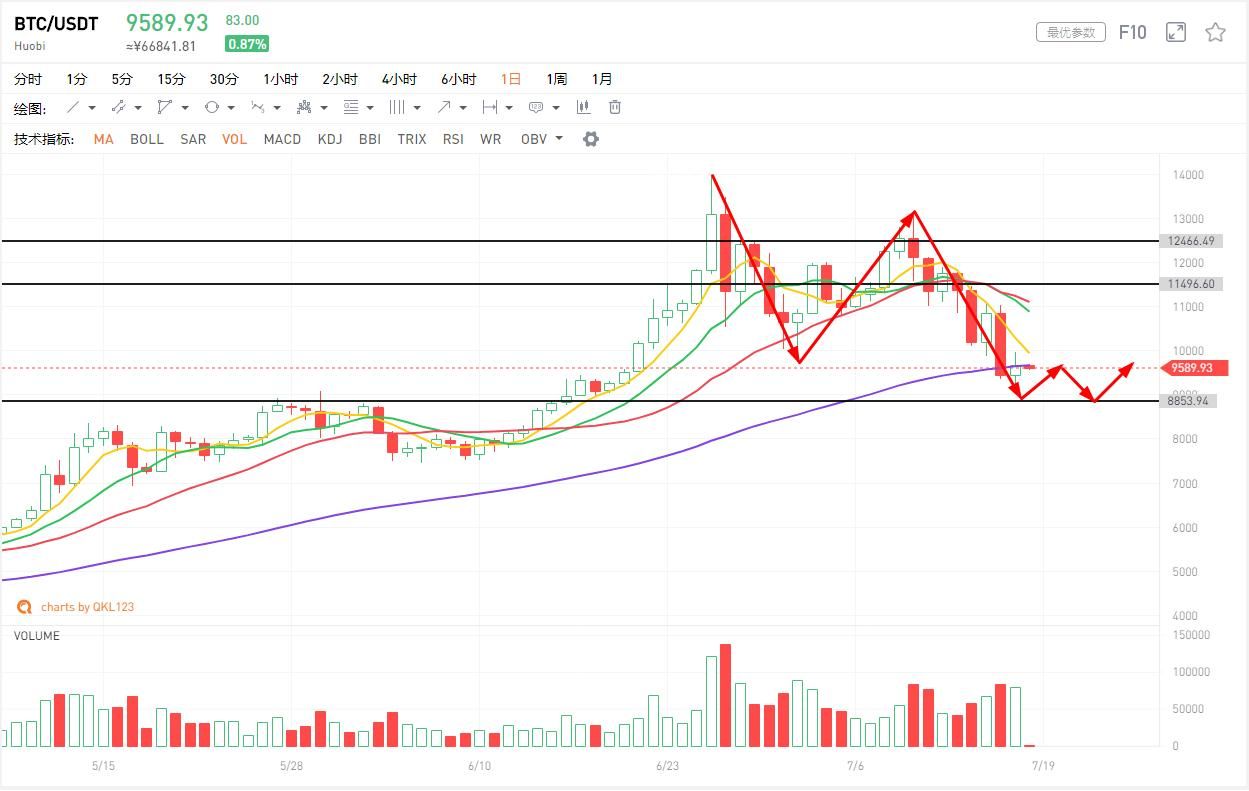 Before we thought that the ETH's downsizing is nearing the end, the $190-200 should be a short-term bottom. We saw that the BTC did not follow the record low when it hit the innovation low last night. Stopping and stabilizing, rebounding, of course, the bottom is not formed in a day, it takes a lot of days of shrinking shocks to brew a new round of rally, I personally think that the target will be consolidating within the range of 190-225 dollars in the short term. Waiting for the indicator and the moving average system to go well, the low position of the small position near 190 US dollars, to a high throwing action near 225 US dollars, effectively fell below 190 US dollars to leave. 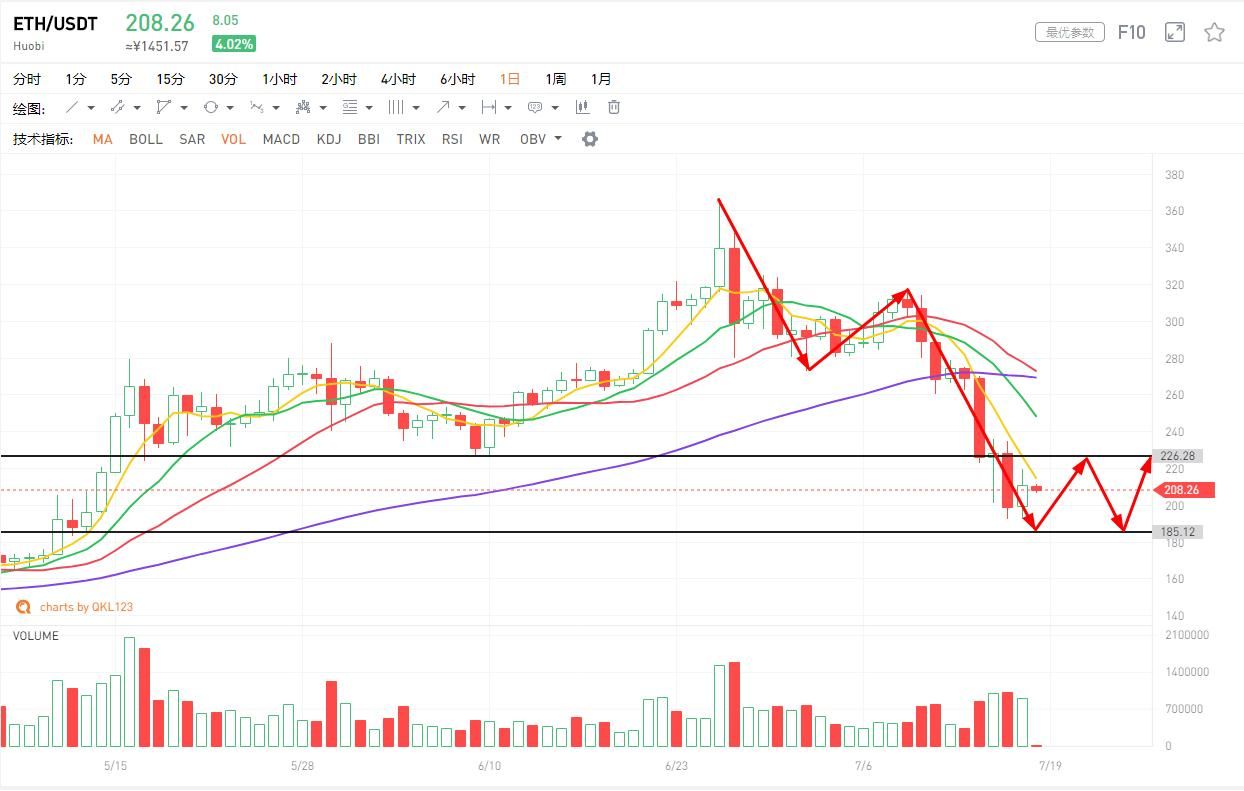 The short-term bottom of BCH has been basically proved. It is basically at a position near 240 US dollars. There is still a certain distance from this point. It may be used in the direction of yin to explore the support strength near 240 US dollars. Breaking this point may induce a small rebound. At this point, the small position can participate in the rebound. The pressure above is around 317 USD. If it falls below 240 USD, it will be bullish and will not wait and see. 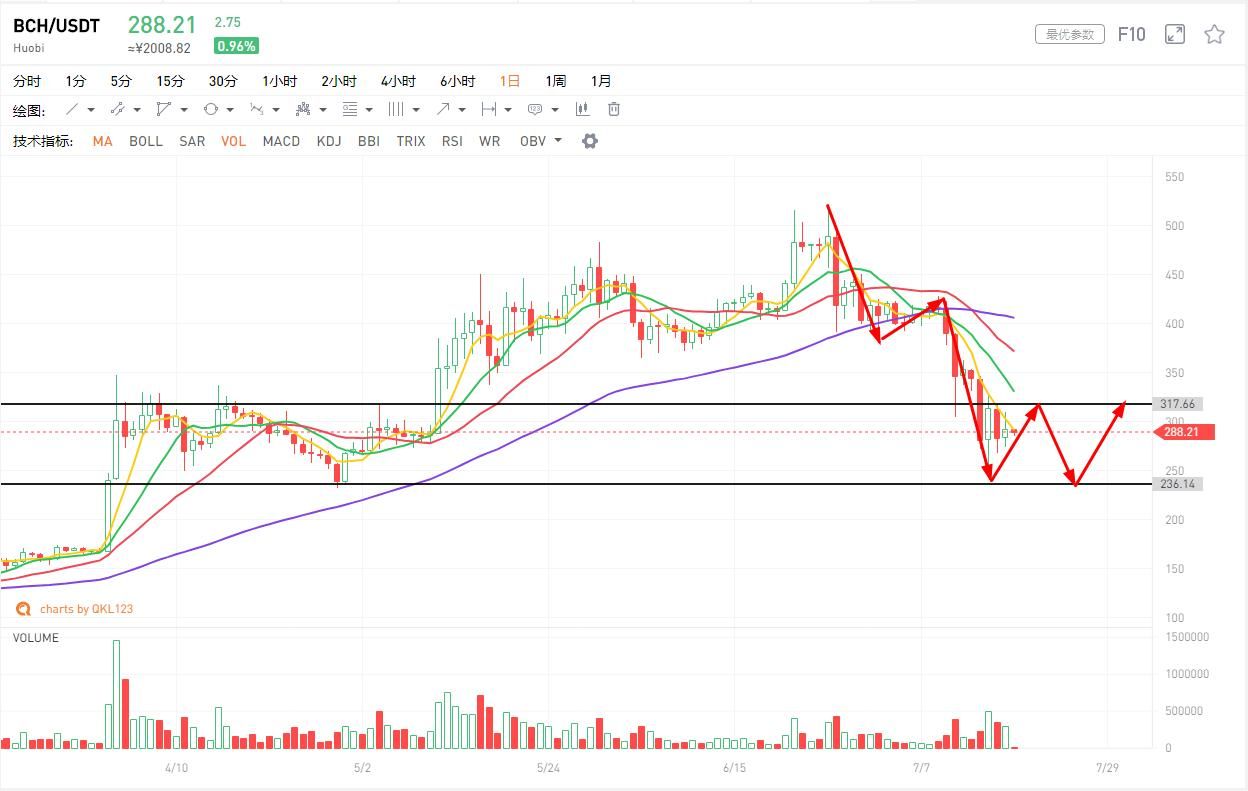 BNB's moving average system is short-sorted, the macd indicator also falls below the zero axis, the price of the coin has hit the lower rail position of the boll, the boll line has begun to nod, the current decline is just as long as the A wave, leaving a N-shaped structure, the trend of the target is very strange, suddenly released a lot of volume, the position of this Yangxian line is very abnormal, and did not change the trend of the target, 5 antennas still form pressure on the price of the currency, if If you want to get rid of the downtrend, you should continue to increase the number of attacks. I personally think that it may continue to adjust downwards. The target price is too large, and the space for the decline is also very large. It is not recommended to participate and pay attention to risks. 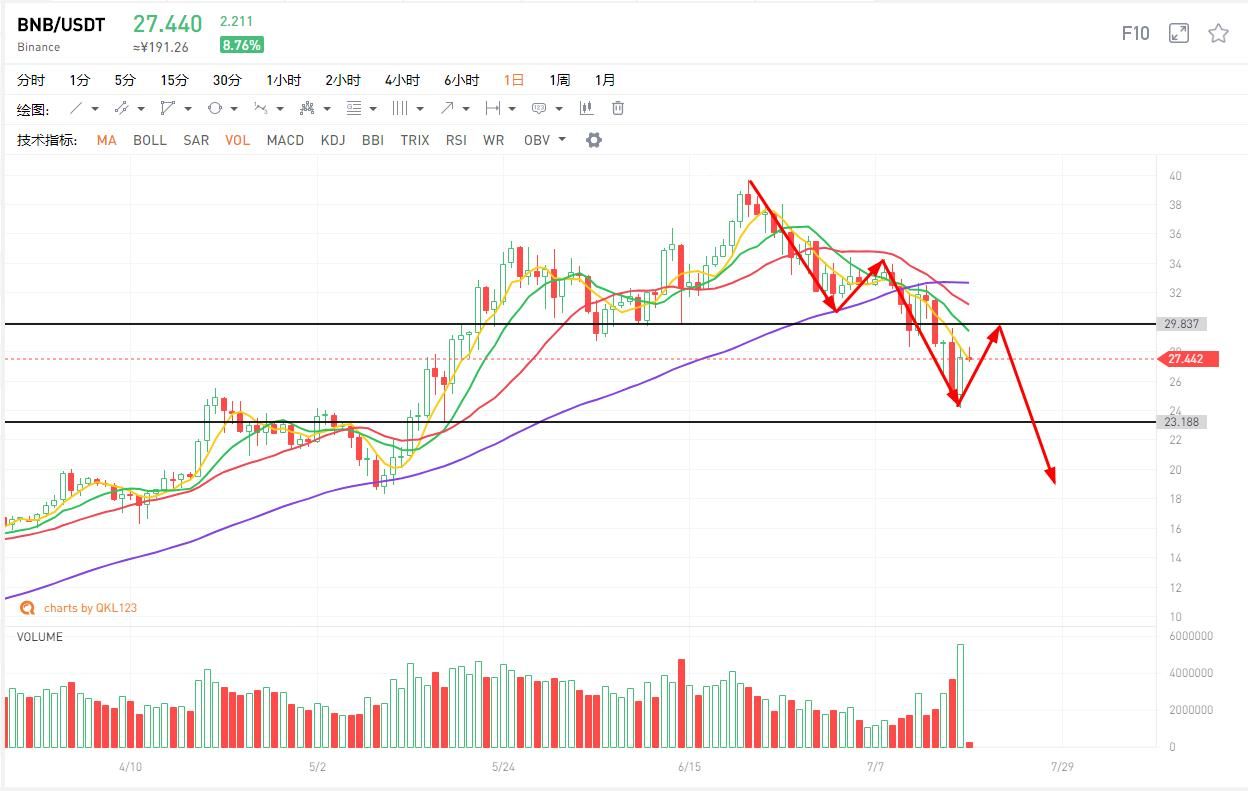