Now, from the market value of encrypted digital currency , in addition to Bitcoin , Ethereum, etc., the project with the highest market value is the Enterprise Operating System (EOS). In terms of attention, EOS is also a star project from 2017 to 2018 and is often considered to be the main competitor of Blockchain 3.0.

EOS is a new blockchain software system developed by Block.one, whose goal is to decentralize everything. Starting in mid-2017, after a year of token crowdfunding, it was launched on June 15, 2018 through a community of dozens of block producers (block producers, BP, also known as super nodes). The main blockchain of the EOS main network began to operate.

One way to understand EOS is to compare it to Ethereum and Bitcoin.

Here we use metaphor to compare Bitcoin, Ethereum, and EOS. See the figure below. 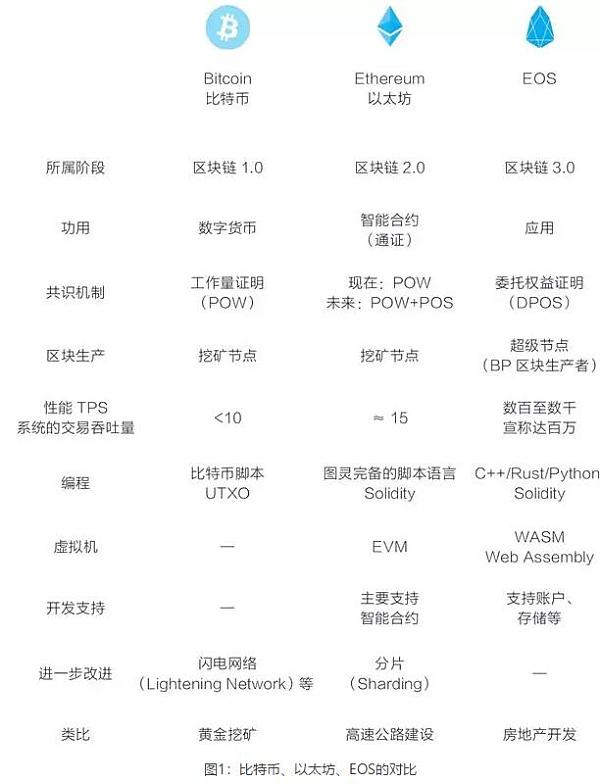 The design of Ethereum is similar to the highway. On this toll highway, the vehicle needs to be paid for driving. It raised funds early and built “highway”, and early investors enjoyed the main interest of “highway”. After that, the mining nodes that build and maintain the “highway” together can also obtain mining rewards and transaction fee income. In the Ethereum network, since various projects have generated a large amount of certificates based on it, the transaction volume of the Ethereum network is relatively large, and the transaction fee income obtained by the mining nodes is higher than that of Bitcoin.

The design of EOS is similar to real estate development. After the sale of the land by Block.one, it logically uses the funds obtained for basic development, and then increases the amount of land by 5% each year.

The prosperity of EOS depends mainly on whether developers who have already bid for a lot of land are developing and operating their own plots? The EOS network relies on super nodes (ie, block producers) to build and operate together. According to the current design, these nodes jointly receive 1% of newly issued EOS per year in return.

Unlike Ethereum, the EOS network is designed to no longer charge for online transaction fees, and EOS certificates have the right to use the network. However, if an application developer does not hold enough EOS certificates, it may be necessary to purchase and pay for rent from the market to obtain the right to use the main network. Analogously, this design is similar to buying or renting an office building.

Of course, the above discussion in a metaphor is just for ease of understanding. The actual situation with EOS is that Block.one has raised funds to develop an open source software called EOSIO. The EOS community uses this software to run the EOS main network, and logically, this main network is not run by Block.one, but by the community. In addition, others have used EOSIO, an open source software, to build an alternative network (altnet).

EOS is an improvement to Ethereum. Each blockchain network that runs with EOSIO open source software can do almost everything that Ethereum can do, such as writing smart contracts and issuing certificates.

Why does EOS have a super node campaign?

The consensus mechanism adopted by EOS is DPOS (Declaration of Entrusted Rights), that is, some nodes become the witness producers (BPs, also called super nodes) in the witness node or EOS after obtaining enough voting support. ), responsible for the block generation of the blockchain.

Focusing on the comparison between POW and DPOS, the discussion focuses on energy consumption, efficiency, and safety. But we can also see why DPOS is a viable option from the perspective of the formation of a decentralized network.

The software system developed based on the idea of ​​blockchain has three key requirements:

· One is performance. Can the overall performance of its decentralized network support a large number of applications?

· The second is the network. Can its consensus mechanism, economic incentives, and community operations attract enough nodes to form a secure and reliable decentralized network?

· The third is the function. Whether the goal is a generic class, a functional class, or an industry class, does it provide the necessary functionality for application development?

The key to the success or failure of a basic public chain is the above three points: performance, function and network (see the figure below). EOS has done a lot of work on performance and functionality, and the DPOS consensus mechanism and super-node campaign are EOS's efforts in the "network" corner.

For Bitcoin and the Ethereum network, in the longer period, they gradually attracted enough nodes to join in the way of mining economic incentives. For some basic public chain blockchain projects, their main nodes are operated by foundations or related parties for various reasons. The most typical one is the small ant (NEO), which has a large transaction throughput (TPS), but there are fewer than 10 official nodes.

EOS uses the super-node campaign to stimulate an active decentralized network, and the super-node campaign is highly matched to its consensus mechanism DPOS (trust entitlement). According to the current design, the 21 active producers and 179 alternate producers who voted together produced the EOS blockchain block, which runs the blockchain network. These block producers are dynamic and are constantly adjusted according to voting dynamics.

The revenue distribution mechanism of EOS blockchain producers is that block producers can get a total of 1% of EOS certificates added each year in return, of which 0.25% is rewarded by each block, 0.75% by place. Voted for distribution. See the information on the May 12, 2018 project release.

From the beginning of 2018 to the June 15th EOS main online line, competition around the Super Node (BP) has shown that this mechanism has relatively successfully mobilized competition among many participants, leading to the formation of the EOS decentralized network. This is a pragmatic and effective path.

From another related mechanism design, we can also see the careful design of the EOS team. Unlike other token-issued projects, the issuance of EOS certificates lasted for a year, which attracted attention. On the other hand, and perhaps more importantly, this approach made EOS certificates relatively scattered among many In the hands of some, to a certain extent, it guarantees the validity of the consensus mechanism for the entrusted equity certificate it uses.

At the most basic level – the data layer and the network layer, EOS is not much different from Bitcoin and Ethereum.

EOS's smart contract and Ethereum are slightly different, but basically adopt a similar design. The application of EOS is similar to Ethereum. Therefore, for the contract layer and the application layer, the two are similar.

The innovation of EOS's system design lies in the tool layer and the ecological layer.

In order to make EOS suitable for application development, the EOS team designed tools and interfaces for accounts and Multi-Index DB. Therefore, here continues Don Juan's classification, which believes that there is a tool layer between the contract layer and the application layer, which makes it easier to develop applications on the EOS blockchain.

Another special design of EOS is that it separates its EOS main network from EOSIO software, encouraging developers to use EOSIO software to build industry-specific, domain-specific blockchain networks (with new network names) and build their own A range of applications. At the top of the architecture, there may be an ecological layer, which is a blockchain that uses EOSIO software, such as the public chain for games, logistics, finance, social, energy, and medical development.

Financial Yilu Tonglu Yifan: A set of efficient data standards and technical standards is necessary for the development of the blockchain industry

Bitcoin futures hit the highest level since May last year