In fact, I have been recommending platform coins since the beginning of this year. Compared with the huge uncertainty of mainstream currencies, platform coins are more secure for ordinary users. (Of course, these positions and bitcoins are to be separated).

Let me want to write this article because I saw a report: 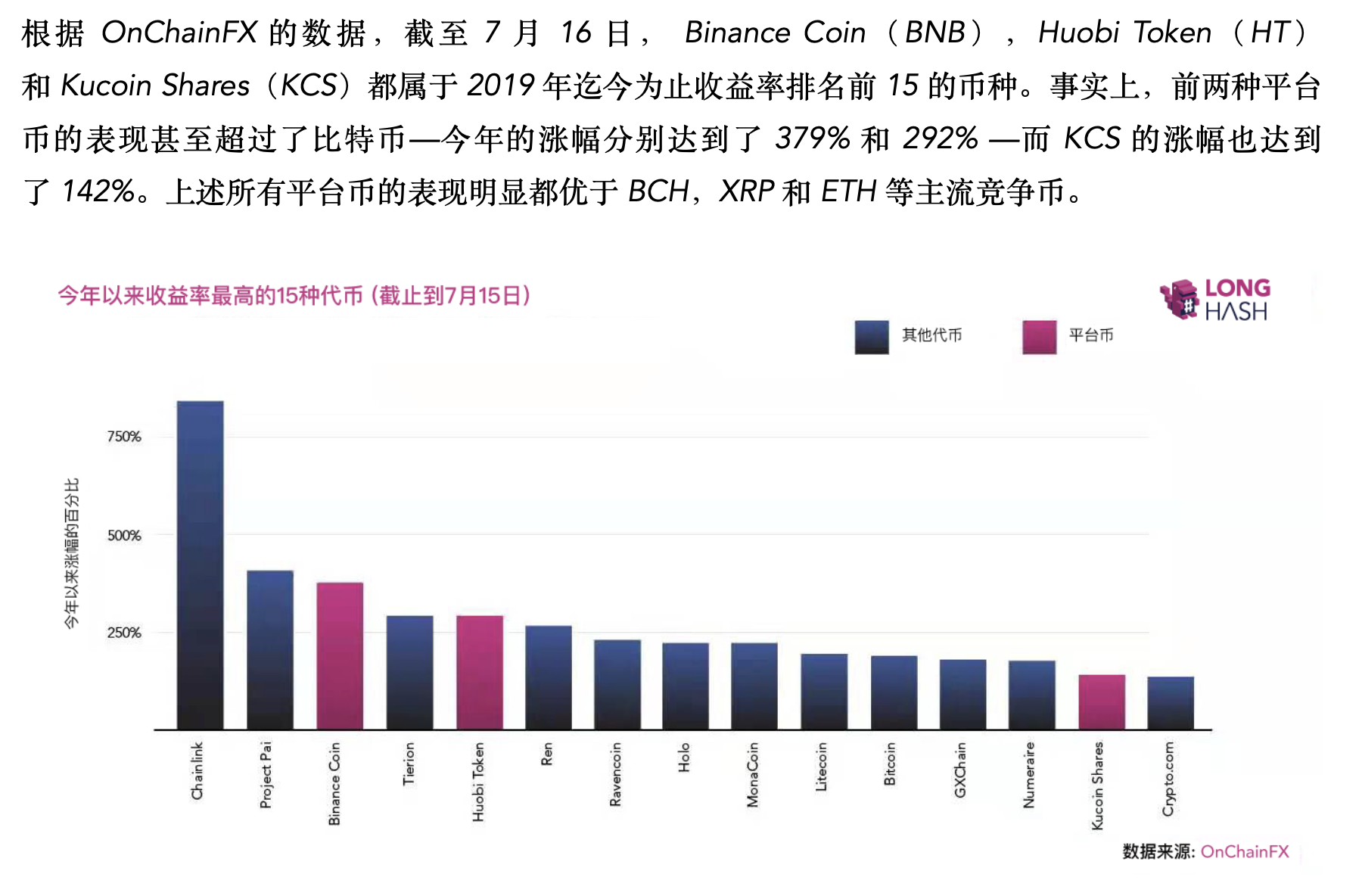 Platform currency's performance this year is still good, especially in July, we have just experienced the rounds of decline, the performance is relatively safe. It is precisely because of this that in recent months, I will receive questions from users about whether platform money can be bought. My answer is to buy, but what platform money can buy, it depends on you. Go and understand yourself.

This article is about the logic of buying platform coins, which is why I think platform currency can be part of the digital asset allocation, but I would not recommend a specific currency.

First of all, we have to clarify two points, that is:

1. Buying platform coins and holding them for a long time is the trust of the exchange as a whole.

2. The price of the platform currency is determined by the ambition, strength, attitude and choice of the entire platform. It is not just that the platform does not make money.

Clear these two points first, it is not clear that you can remember first.

Many people think that the platform currency is up and down is nothing more than watching the platform to make money? In fact, it is true that there is not much wrong with this, but the platform of the same profit, the platform currency may also be different. For example, just before the fire of HT and the currency of BNB just completed the latest round of repurchase destruction, because their repurchase ratio is 20% of the profit, so we directly compare the two to know Their quarterly profits:

Therefore, the price comes from the market consensus, not the high profit of the exchange, the market value of the platform currency is high.

Again, the above is just an example. There is no such thing as BNB being overvalued or HT being undervalued. The price is determined by the market. After the profit is disclosed, the market still does not think that HT is undervalued and generates strong buying, or BNB is undervalued. Producing a large amount of selling is enough to show that the market is recognizing the current price.

Moreover, the profit is such a thing, the platform says how much is, and you can not obtain evidence. This is not what I said, Xu Xing (OK boss) said:

This Weibo is really a battle… Later, everyone knows.

Don't comment on the matter itself, but from there you can see that the peers are really naked…

Second, do not look at profits, then what?

Many investors feel that investing in platform currency is to look at the platform to make money. Now tell them that they can't just look at platform profits. They will definitely ask: If you don't look at profits, what do you look at?

One of the more critical points I think is to look at the exchange — whether it will play.

Before the fire money boss Li Lin announced that their fire money profits were higher than the currency security, when the group friends asked a question, that is why the profit of the fire coin is so high, the HT market value is still much worse than the BNB? Li Lin’s answer is probably like this:

"Because the currency has chosen the right path earlier than us, we also correct it in time, and they will develop longer on the right road."

(Probably means this, the original words are forgotten).

I don’t know what is the correct way for Li Linkou’s Chinese currency. Is it a repurchase and destruction at the beginning, or is it the future IEO, or is it a deduction? In short, from the perspective of results, the currency security is more fun than the fire currency, but the speed at which the fire coins and other platforms catch up this year is also fast.

For the exchange, if the platform currency is simply a currency supported by a 20% profit repurchase per quarter, then there will not be much market value expectations. Many people say that the bull market is coming, and the profit of the exchange will rise sharply. This is not wrong. However, the profit expansion of the exchange is due to the fact that the market is getting better. If the market is getting better, the mainstream currency and other currencies will have a good increase. Why do you still need platform coins?

It’s not because the platform currency can get the other “energy” of the exchange.

Why is the currency safely climbing when the market is not good at the beginning of this year? In fact, many exchanges later discovered the mysteries and followed suit.

The answer is: the exchange must know how to “add leverage” to incite users, project parties and market makers.

How much can the exchange collect on the platform to earn money? In other words, the centralization of the cryptocurrency world is far less supportive than the community consensus. As the saying goes, people are more powerful and why the model currency is so lively because they incite the consensus of the community and use one of the most primitive The way. And many exchanges have discovered this. What is the most important reason for everyone to buy platform coins? Everyone can drink some soup when they want to trade meat.

The conclusion is: The core is whether you can let users who hold platform coins "drink soup."

Focusing on this, this is the core reason for deciding whether you want to hold the platform currency of this exchange. What are the profitable channels for trading? On the currency fee, transaction fee, contract, new project (IEO), etc., can each part be divided into users to drink soup?

Third, judge the standard of the platform

So after determining the investment to be part of the platform currency, how to pick a reliable platform? Many people think this is a very complicated matter. In fact, only a very simple standard is needed: the coins on the platform can rise.

At the beginning of this year, when the market has not fully recovered, why does the currency account for almost half of the real trading volume? (Even many people think that 80% of the altcoin money is in the currency), it is very simple, because all the coins on the top of the platform can rise, and the coins of other platforms will fall in addition to falling, and you are willing to go where to play? Even at the end of the bear market, the coin security made an IEO, the first time the BTT tenfold increase, so that all desperate people see the dawn of a glimmer of hope.

Later, many exchanges discovered this gameplay, and with the market picking up, the status of a big one was quickly changed, and it became a situation of hegemony. Even many new exchanges this year were quickly produced. Over 100 million profits.

What is the core of the exchange? Is the user.

What is the user's core appeal? It is making money.

Where is the money? The exchanges let the profits come out, and forced the project parties and market makers to make profits.

Only the "food class" cuts less fiercely, and gives the benefit to some participants, then the game will continue to play, and the user will naturally continue to flow.

An exchange that allows users to make money is a good exchange, and it is a trading exchange with a pattern.

The platform currency of a good exchange is a good currency.

As in the above comparison, there are some exchanges with similar profits and currency security. The market value of platform coins is much lower than that of BNB. Isn't their "odds" higher? Is the space bigger and more worth looking forward to? BNB has the sixth market value, is there enough imagination? There are even some people who think that the platform of the small exchange has already earned billions of quarterly profits for the "muffled big fortune". For Bo's future, is it more likely that they will become the next ten times the hundred times?

Others, you still have to find out yourself, investment is still your own business.

Finally, summarize a few points in this article:

2. The core of the market value of the platform currency is that the platform is willing or unwilling to give the user a soup.

3. It is very simple to judge whether the platform has future standards: whether users can make money on the platform.

4. It is recommended that the platform currency be part of the digital asset allocation, but don't put the cart before the horse and forget the bitcoin.

Disclaimer: All of the above content does not target or imply a platform, and does not recommend or oppose the purchase of a platform currency.

This article is not intended as any investment advice.

Interests: I hold the platform currency of 5 exchanges.

In Africa, I see the…

Blockchain games are breaking out,…

Goldman Sachs CEO: We have…