“Hyperledger Fabric is a fake blockchain!”

Since the release of Libra, the long-lost blockchain community has become active again, and some companies exploring the blockchain business are also sloppy. I believe you have also noticed that these large companies often turn a blind eye to the existing blockchains such as Bitcoin and Ethereum. This is because they know the importance of data, so they don't use Bitcoin, Ethereum, which open-source public blockchains, but have a soft spot for private blockchains that can control participants.

When it comes to private blockchains, you have to mention IBM. IBM is a leader in the private blockchain industry, and its blockchain product, Hyperledger Fabric, is the preferred choice for many blockchain developers, and IBM is also working with big companies like Wal-Mart and Aetna Insurance Financial Group. The exploration of blockchain landing scenes to seize the opportunities in the enterprise blockchain and expand the advantages. According to some statistics on Twitter, the number of IBM blockchain patents has increased by 300% in the past year alone.

As one of the many contributors to the Hyperledger Foundation, an open source non-profit organization, including the recently joined Microsoft and customer relationship management platform Salesforce, IBM has spent a lot of time promoting the development of Hyperledger Fabric, which means that Hyperledger Fabric will have The same characteristics of Bitcoin and Ethereum, which are common blockchains, will also remove the "not suitable for enterprise scenarios" feature.

In this regard , the former Morgan Chase blockchain team leader Stuart Popejoy is even more sharp, claiming that IBM made a fake blockchain !

Why does Stuart Popejoy think that IBM has made a fake blockchain ? This article tells you.

[Declaration: The article only represents a personal point of view, and its content and opinions do not represent the position of the blockchain base camp]

When I was working at JPMorgan Chase in 2016, I led a team specializing in cutting-edge technology to study the potential applications of the blockchain in the banking industry and strategic investments in the blockchain. As part of our work, we delved into earlier versions of Hyperledger, Axoni, Symbiont, Ripple, and Ethereum. It was clear at the time that several blockchain projects on the market were not technically suitable for real business scenarios. Unfortunately, Hyperledger Fabric has not solved this core problem to this day. The details we considered at the time included:

Starting from these details, I think that IBM's Hyperledger Fabric fundamentally lacks the necessary elements of the blockchain, and its performance indicators are full of misleading. The feasibility of long-term business can not help but make a big question mark.

We have never regarded the digital games of TPS and node counts as a blockchain adoption standard, but after experiencing these digital games, we think it is necessary to tell the reader what is the blockchain and what is not the zone. Blockchain.

To better understand the positioning of the IBM blockchain, we need to go back to the definition of the blockchain. The core of the blockchain is a decentralized, non-tamperable ledger with events or transactions stored in the book, and which data is added to the ledger is entirely determined by the consensus mechanism. In a public blockchain like Bitcoin and Ethereum, this consensus is achieved through proof of work or “mining”. In the licensed blockchain, participants provide cryptographic signatures to vote on the content of the consensus to reach a consensus. Either way, there is no central agency to intervene.

The problem is, if there is no enforcement based on cryptographic algorithms, no high degree of democratization, and no cryptographic mechanisms to ensure the safety of participants voting, then you can't prove whether someone has falsified the blockchain book. Consensus with a fault-tolerant mechanism is a hallmark feature of blockchains. Without it, IBM's "blockchain" is nothing more than a time-stamped list of projects.

The Hyperledger Fabric architecture exposes a number of vulnerabilities that could be exploited by malicious participants. For example, it introduces public key cryptography and certifier signatures "inside the network," but these major security guarantees are only generated after a transaction with an external signature is submitted.

This fundamentally abolishes bitcoin and other blockchain time-tested security models where the source of any transaction is only guaranteed by the external user's public key signature and the system cannot interfere in any way.

In stark contrast, the only important signature in the Hyperledger Fabric is the verifier's signature, and the user's signature disappears into any database replicated over the blockchain network. 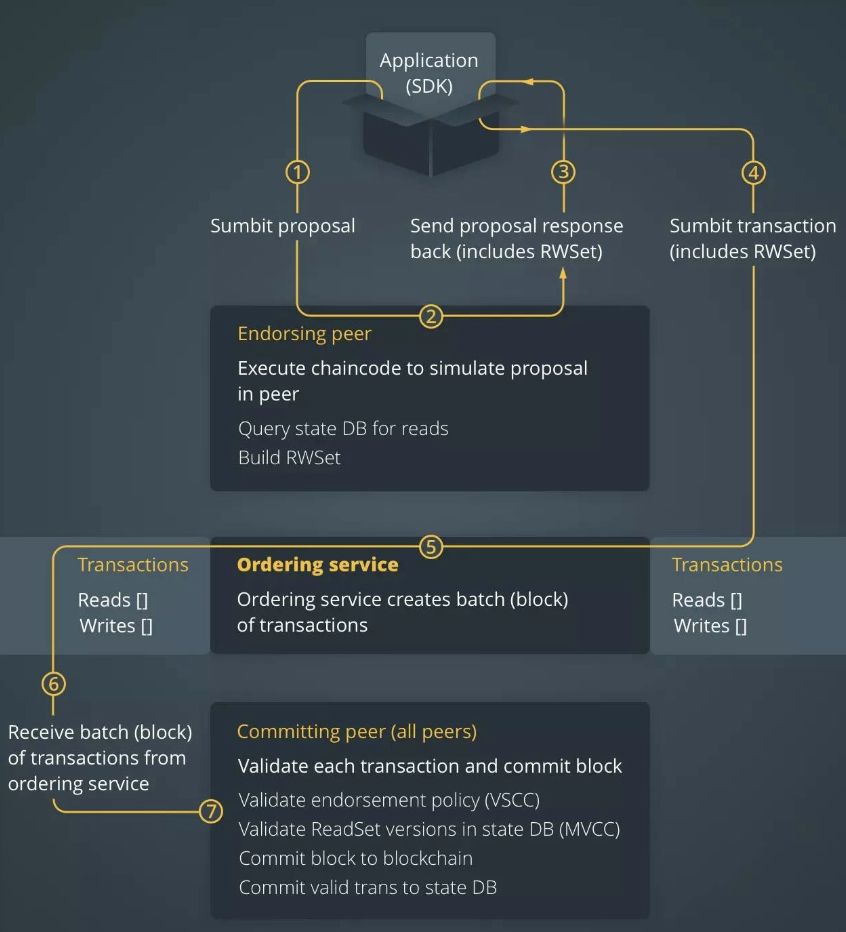 With the help of the API provided by Hyperledger Fabric, adding a transaction to the blockchain goes through the following steps:

1. Verify the execution strategy of the endorsement node;

2. Verify the version of the read-write set in the current state database;

3. Submit block information to the blockchain;

4. Submit the verified transaction information to the status database.

Researchers at Hyperledger Fabric have spared no effort to play these digital games, making a fuss about so-called performance metrics, because the architecture of the Hyperledger Fabric is simply not scalable while maintaining optimal performance. Hyperledger Fabric uses a multi-chain environment (called "channel channels") to ensure privacy between participants. This privacy is an important feature of the private "enterprise" blockchain, but it will inevitably lead to some trade-offs and will greatly increase the complexity of the blockchain.

However, multi-chain solutions are not a good choice in terms of the scalability of the enterprise blockchain, because doing so will make the deployment process too complex, unevenly distributed nodes, unreliable smart contracts, and Increase potential points of failure.

Even so, for each independent channel, the transaction volume per block of the blockchain is difficult to break the 800 mark, but even the blockchain with 16 channel configurations can hardly reach 1500 TPS, if the blockchain has been Maintaining a throughput capping run can take 10 to 20 seconds to delay.

Recent research aimed at speeding up the operation of the Hyperledger Fabric has allowed it to process an astonishing 20,000 transactions per second, but behind the performance boost is the researchers' massive “magic change” to the Hyperledger Fabric architecture, which makes Hyperledger Fabric The blockchain that has become an approximation has become a quadruple: Endorsers no longer act as verifiers and Kafka is considered the only viable subscription service . In the end, these are still just single-channel performance, which means it goes against the idea that the blockchain is a shared trusted source.

Why is smart contract important?

Chaincode has completely failed in these aspects. We found that the first program "Hello World", which is known as the developer, can be implemented in just a few lines in other languages, but in the Chaincode it needs 150. There are so many lines. The more code there is, the more vulnerabilities there may be. There are many vulnerabilities that can cause millions of dollars in damage in such a large amount of code.

Writing and reading smart contracts shouldn't be so difficult. Developers have to deal with low-level issues such as dispatch and argument discovery. The more code there is, the more vulnerabilities there may be.

Not ready for the future

IBM has led the development of standards for many enterprise blockchains through intensive collaboration with other large companies, but it is important to fade away from the glitz of the surface to explore the blockchain in depth.

IBM's so-called "blockchain" technology has flaws in many aspects, such as security, performance, reliability, etc. In other words, IBM provides a poor quality solution for companies that want to use blockchain to achieve business improvement. To better realize the value of the blockchain, seasoned customers will choose blockchain solutions that have better tools, better blockchain performance, better vision, and a true understanding of how to use this technology.

[Declaration: The article only represents a personal point of view, and its content and opinions do not represent the position of the blockchain base camp]

Stuart Popejoy has 15 years of experience in building trading systems and data exchange backbones for financial institutions. In 2016, Stuart and Will Martino co-founded blockchain solution company Kadena and became the company's president. Prior to this, Stuart worked in the blockchain product division of JPMorgan Chase & Co., where he led and developed Juno's main blockchain product, Juno, while Stuart also wrote many trading algorithm scripts for JPMorgan Chase. Help him develop a simple, customized smart contract language Pact at Kadena.

Today's topic
A thousand readers have a thousand Hamlet, and the author's critique of the Hyperledger Fabric is a hit. What do you think of it?

Block.one CEO: Block.one repurchasing 10% of shares and regulation is not related

The preliminary evaluation of the 3rd China Blockchain Development Competition was successfully concluded, and 40 projects were shortlisted for re-evaluation.