In less than two weeks, BCH fans around the world will celebrate the two-year anniversary of the fork on August 1, 2017. Bitcoin cash (BCH) has been split to date and has undergone four upgrades. BCH developers also plan to upgrade the chain in November of this year, and are reviewing rules related to changes to the consensus mechanism before the feature freeze on August 15, 2019. News.bitcoin.com summarizes the development of BCH in the past two years, and all completed BCH functions can be found on the analysis website Coin Dance. 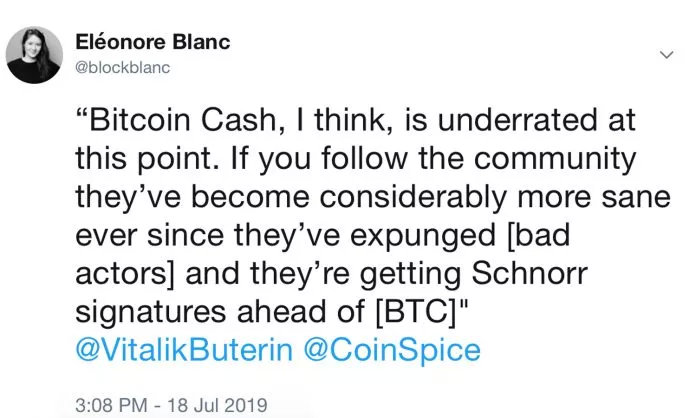 Ethereum co-founder Vitalik Buterin said in an interview: This is a statement about Bitcoin cash

In the early days of Bitcoin, Nakamoto had added operational code to push data or perform certain functions through the Bitcoin scripting language. Soon after, the developer found an error in the OP_LShift specific opcode, causing the opcode to be disabled. In May 2018, Bitcoin cash developers reactivated the Satoshi opcodes, which allowed various decision-based transactions, compilers, and other functions based on the opcode used.

The opcode OP_Checkdatasig is an action script that checks the validity of the signature using the message and the public key. Essentially OP_Checkdatasig enables hashes in operational calculations to be automatically verified for signatures and allows Oracle to validate data. The opcode advances some very cool concepts such as non-client hosting systems, OnChainSLP token auction consoles, BCH periodic payment systems, donation platforms and OnChain chess games.

Block size is expanded to 32MB

The Bitcoin cash chain achieved a 32MB block expansion in May 2018. The block size of the BCH is much larger than the BTC 1MB limit, which is four times larger than the 8MB used for bifurcation two years ago. Although 32MB blocks have not yet been processed, in September 2018, the BCH main network has tested large blocks, and the miners have handled some 15MB blocks, the largest block being 23MB. At the same time, before the BCH chain forked to create the BSV, on November 10, 2018, BMG handled multiple 32MB blocks.

On July 25, 2018, the Bitcoin Unlimited development team announced the addition of graphene technology to the BCH chain. Graphene is a block propagation concept with the goal of being 10 times more efficient than dense and extremely thin blocks. Since the graphene mechanism does not provide sorting information, all sorting information will be added under the current TTOR sorting mechanism. Although it does not seem to have much impact now, as the block size increases, this will slow the block propagation. According to BU member George Bissias, code merging enabled the first function of the graphene block to be implemented, and he also pointed out that "the code needs further optimization."

Before implementing transaction specification ordering or CTOR, consensus rules process transactions in a list and topologically sort the lists. After the upgrade on November 15, 2018, the BCH chain does not need to be sorted by list, but runs in a set of blocks and is done in a standardized manner. Developers believe that CTOR can reduce the computational load and allow the use of giant blocks, which has great advantages in propagation speed and is of great significance for the future expansion of BCH.

When the block height reached 582680, the BCH chain was upgraded for the fourth time by adding a Schnorr signature. Schnorr signatures serve as the foundation for a variety of technologies that can improve scalability and enhance privacy. On the day before the BCH upgrade, indie developer Mark Lundeberg told news.bitcoin.com that after further upgrades to Schnorr in the future, the solution would also provide public signature aggregation and more complex signing concepts.

Many achievements worth celebrating

Mentioned the development of the BCH platform and protocols, in fact, this is only the tip of the iceberg, as well as an open protocol that allows for secure authentication – Cash-ID ; a lightweight SPV wallet that uses BCHD and allows client filtering – Neutrino ; by Flowee A database specifically designed for Bitcoin cash UTXO – Hash-DB ; a hybrid application that helps protect personal transaction privacy when using the BCH network – Cashshuffle .

In addition, BCH supports companies and individuals to launch a fundraising campaign to support the future development of Bitcoin cash in May, which has received strong support from BCH enthusiasts. The fundraising progress can be found on the Bitcoin.com/fundraise page. The goal of fundraising activities is to raise 1,600 BCHs by August 1st, with only 9 days left. At that time, Bitcoin cash fans will celebrate the fruitful results of BCH in the past two years.

What do you think of the progress made by BCH in the past two years?

Thank you for your support at Bitcoin.com