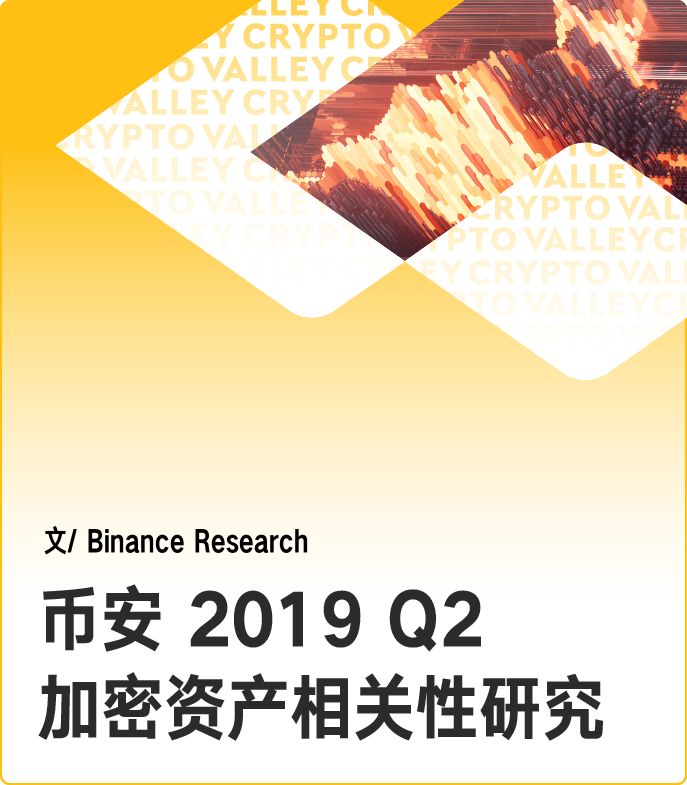 In the financial industry, analysts widely use correlation indicators to effectively allocate assets for diversification. Although the crypto-asset industry is still in its infancy, such metrics have gradually gained the attention of stakeholders, both institutional and retail.

Based on the research on the correlation of some large-scale cryptographic assets in the first half of 2019, this report was formed. The aim is to analyze and anticipate future trends by observing recent changes in the relevance of the digital asset industry.

The report points are as follows:

Strong performance in the second quarter of 2019

Despite a fall in the last few days of the second quarter, the overall performance of the crypto asset market in the first two quarters of 2019 was very strong.

In the last quarter, the total value of the crypto-asset industry rose by 139%, the third fastest growth rate in the industry since 2014. In terms of absolute dollar amounts, the total dollar value of crypto assets increased by approximately $19 billion in the second quarter of 2019, ranking second in the quarterly increase history since 2014, second only to the bull market in the fourth quarter of 2017. rise.

Figure 1: Quarterly change in the market value of crypto assets in 2019 (%)

Figure 2: Quarterly change in the market value of crypto assets in 2019 (billions of US dollars)

Relevance overview for the second quarter of 2019

Statistically, correlation measures the strength of the linear relationship between two random variables, ranging from -1 to 1.

This report selects 30 cryptographic assets as samples, based mainly on the average market value ranking from January to June 2019.

In the next section, we explore the relevance of the second quarter of 2019 and draw observations from the data set. 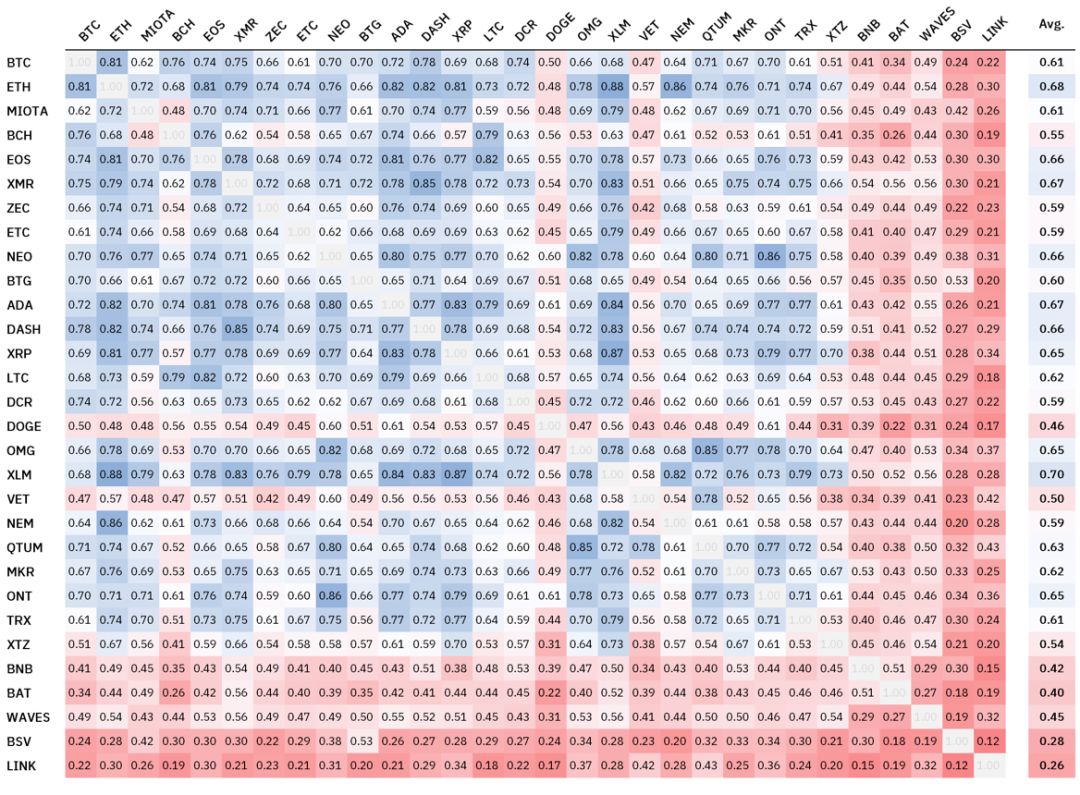 However, analysis of several specific factors and events suggests that they may have an impact on the relevance of specific crypto assets in the second quarter of 2019.

In addition to the specific “catalysts” associated with the project, we have previously used “consensus mechanism design” and “exchange on the currency” as key factors influencing the relevance of specific crypto assets. In reviewing these factors, we observed some similar effects in the second quarter of 2019.

In addition, from the dataset, we have observed other specific factors that influence correlation (see Figure 3):

Next, we compare these results with the results for the first quarter of 2019.

Figure 4: Daily market yield correlation matrix for large market capitalizations in the first quarter of 2019 (in US dollars) 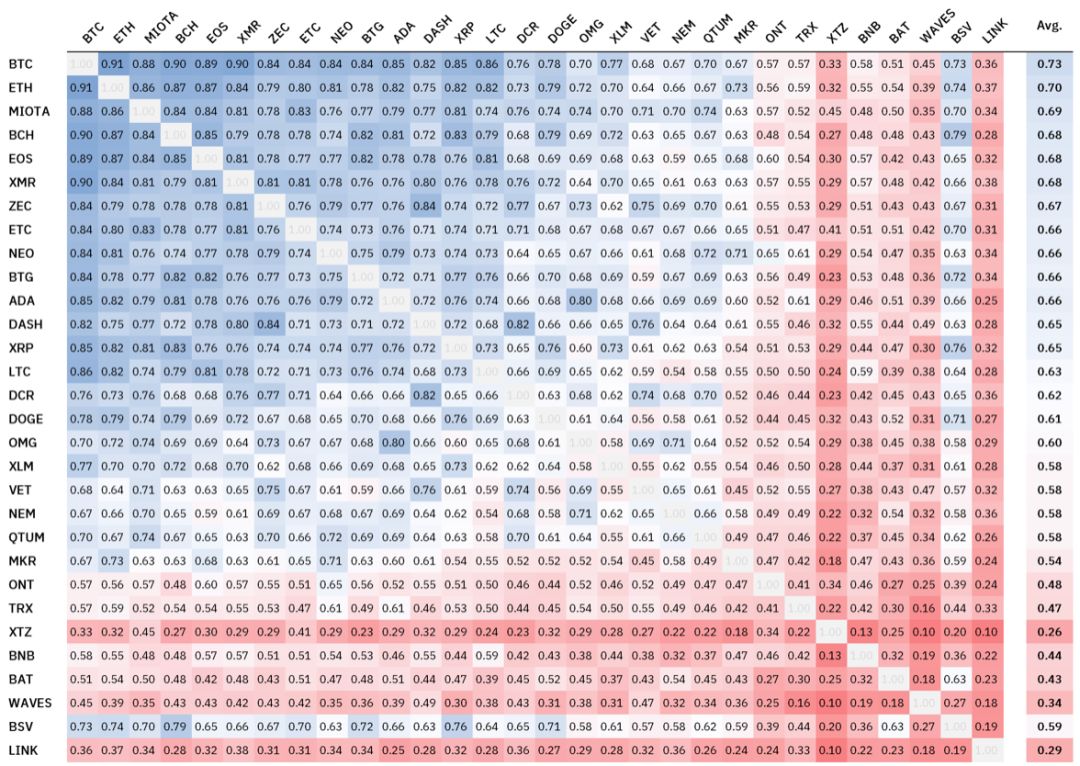 Most of the correlations are similar to our March 2019 report on the relevance of cryptographic assets. However, it is worth noting that the average correlation between BTC and all other major crypto assets in the second quarter fell from 0.73 to 0.61.

Some interesting phenomena can be found from the above table:

The average correlation between Tezos (XTZ), Ontology (ONT) and Wavefield (TRX) and other digital assets increased the most.

On the other hand, the average correlation of BSV declined the most, probably because it was removed from Kraken and the currency trading platform. Interestingly, the correlation between Dogecoin (DOGE) and other cryptographic assets is further reduced, but remains highly correlated with Litecoin (0.55), probably due to the merger of the two currencies.

Therefore, within the crypto-asset industry, it is still difficult to achieve risk diversification by only making long positions in large-cap value-encrypted assets.

However, investing in low-capital-encrypted assets or adopting alternative strategies such as long/short combination may help investors build market-neutral portfolios. As investors have access to more DeFi and leveraged products, they may be able to access more liquid and complex financial instruments to help them build more unique investment strategies in the future.

This section analyzes the correlation strength of these IEO digital assets in the last quarter in the second quarter (March 31-June 30, 2019).

Although the target niche markets for these projects are not relevant (BitTorrent focuses on decentralized file sharing, Fetch focuses on advanced data markets, and Celer focuses on Tier 2 scalability), but they are all in similar market conditions. The shelves were put on the open market immediately after the completion of the public offering.

We selected the seven digital assets with the largest market capitalization on June 30, and five projects that sold tokens on the currency trading platform before the start of the second quarter of 2019. Then, the correlation calculation was carried out using the closing and closing of each item between March 31 and June 30.

Figure 6: Digital Assets Daily Yield Correlation Matrix (in US dollars) issued on Launchpad in the second quarter of 2019 It is clear that the three IEO projects in the first quarter of 2019 are highly independent of other digital assets on the market and have the lowest correlation with high market capitalization assets.

We can see that although the first three IEO projects were recently priced at BNB (at least in part), their correlation with BNB is also low, averaging 0.22.

Interestingly, among the three, BitTorrent (BTT) is the only one that accepts both BNB and TRX digital assets for fundraising at the time of sale, but it has the highest correlation with BNB ( Just 0.27).

It remains to be seen how many industry characteristics or the nature of the project itself contribute to the overall relevance. As more and more assets go into IEO, we also need to see if some of the results in this report will remain the same in the future and whether they will apply to a wider range of cryptographic assets.

Conclusion: The correlation volatility trait factor can not be ignored

The trait factor is a key factor affecting the correlation between different digital assets, which is consistent with our previous observations.

The significant decline in the correlation between BTC and other assets may be caused by the “quality preference” of potential investor behavior, which is very similar to the situation when the BTC market share increased in the early bull market in 2017.