On the 5th anniversary of the pre-sale of Ethereum, let's take a look at the progress of the Ethereum network and the cryptocurrency community since 2019.
On July 22, 2014, Ethereum crowdfunding started, and many developers, start-ups, entrepreneurs and companies have been passionate about Ethereum for many years. Five years later, in 2019, the Ethereum ecosystem showed a diversified, global and increasingly decentralized posture, with an increasing importance, recognition and excellence.

To a large extent, the Ethereine ecosystem ended the process of licking wounds at the end of last year after experiencing a sharp drop from a record high in 2018. Discussions around the bear market have gradually given way to the perception that despite the volatility of market prices, the friction of the entire industry has caused the cryptocurrency to thaw in winter, demonstrating a strong, stable and growing ecosystem. . Especially for Ethereum, it has been like a vibrant, attractive and rising tornado since 2019, sweeping the entire blockchain and cryptocurrency ecology.

So far, how good this is. And we have just finished halfway.

Ethereum has more than 70 million unique addresses, of which 16 million (16%) were created since the beginning of the year.

The current total supply of ETH is 106 million, with an average of 2.28 ETH per address. If the top 500 addresses with the most ETHs are excluded (the ETHs held by these addresses account for 37% of the total supply), the average ETH holding for each of the other addresses is 1.43 ETH.

Ethereum Network Daily Trading Volume (left) and Unique Addresses (Right) Trend Graph, Source: etherscan.io
In February of this year, the Ethereum network ushered in the upgrade of Constantinople [2], which is a hard fork in the plan to improve the Ethereum network and further develop the network in the direction of Serenity multi-stage renewal. Includes a transition to the PoS (Proof of Equity) mechanism. The upgrade of Constantinople includes four EIPs (Ethereum Improvement Proposal), and it is worth noting that EIP 1234 reduced the network's block reward from 3 ETH to 2 ETH, which is a 1/3 reduction.

Adoption of the enterprise

Many companies have already taken the lead in adopting blockchain technology . Through investment, innovation, PoC (proof of concept) and partnerships, these large companies have been helping to drive this adoption process and show people the opportunities that decentralized technology brings. As of now, we have seen the important theme of privacy protection in corporate adoption activities.

The announcement of the Libra project is full of emphasis on protecting the privacy of user data, although it is also full of its own ideology, regulatory and technical considerations.

PegaSys, powered by ConsenSys, released the Pantheon 1.1 version of the enterprise client [3] in April this year, which introduces Trusted Compute and the privacy protection component Orion, specifically addressing the existence of the enterprise for Ethereum. Privacy concerns.

In May of this year, EY (Ernst & Young) released a set of standards and agreements for improving private transactions in the Ethereum public blockchain. Ernst & Young named the agreement Nightfall and published it on GitHub [4]. Committed to allowing businesses and individuals to perform ERC 20 and ERC 721 token transactions in the Ethereum network "completely private."

Some consulting companies and research companies have shown us a quick exploration of the blockchain . According to a June report by US consulting firm Gartner [5], the report estimates that by 2025, the blockchain will add $176 billion worth to businesses and will increase by $3.1 trillion by 2030. Gartner estimates that of this $3.1 trillion, about $1 trillion in funding will come from improvements and opportunities between the company and between companies through blockchain technology. See below: Estimated data published by Gartner
Deloitte's report at the end of 2018 summarizes interviews with 1,000 executives considering blockchain technology for plans for 2019 and beyond [6]. 95% of respondents said their company plans to invest in blockchain technology in 2019. Nearly 40% of companies plan to invest more than $5 million. 84% believe that the blockchain will eventually expand and will be mainstreamed, although 39% believe the technology is currently “over-hyped”. Executives in the automotive, oil and gas, and life sciences companies are most optimistic about the blockchain, followed by the financial services industry . See below: 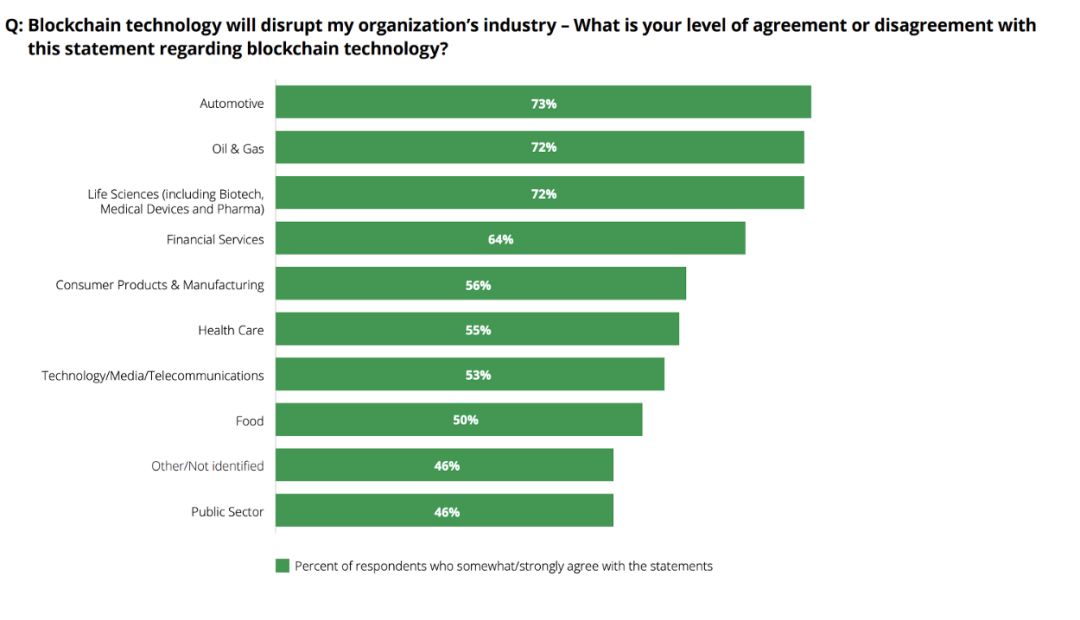 Deloitte survey report data
In general, the trend is for executives to move cautiously and purposefully to explore the opportunities offered by decentralized technology . An example of this is investment bank giant Goldman Sachs, who quietly released a job posting to pre-recruit a digital asset project manager to join their internal incubator project. [7]

In 2019, governments have shifted from investing in exploratory blockchain projects to launching their own pilot projects to modernize public sector operations. 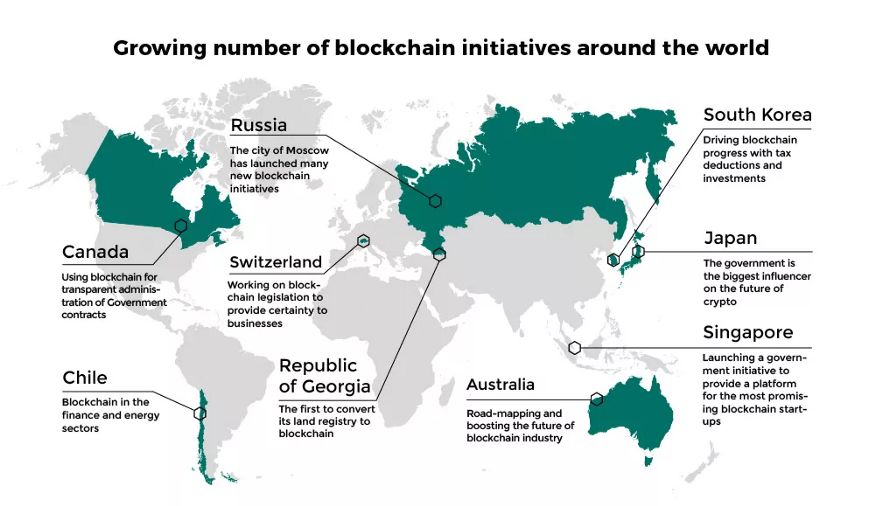 Some regional government blockchain programs are exploring specific use cases: a project in Georgia is using blockchains to simplify land registration frameworks [11]; China's Changzhou has partnered with Alibaba to study blockchain technology The potential to protect medical data [12]; the Australian government is also using blockchain to provide traceability to the country's major sugar exports [13].

Dozens of local and central banks are actively promoting blockchain-based projects to address some of the long-standing efficiency issues :

The Bank of Thailand, the South African Reserve Bank and the Monetary Authority of Singapore have created projects to use the digital currency issued by the central bank (CBDC) to study alternatives to today's banking systems. Sexual scheme

At the end of 2018, The World Bank issued the first blockchain bond “bond-i”, which raised $110 million in two-year bonds, marking the first time that investors have managed entirely through blockchain technology. Trading to support the development activities of the World Bank.

The United States is conducting extensive exploration to clarify rules and regulations related to blockchain . For example, the Governor of Wyoming signed the HB0070 law in February 2019, authorizing the Secretary of State to develop and implement a blockchain-based file system for business entities and business documents [16]; in March 2019, the Governor of South Dakota signed the HB1196 Act, The definition of blockchain technology is provided for specific purposes [17]; Arkansas has also signed a bill (HB 1944) that stipulates that contracts containing smart contract terms related to transactions are undeniable in their legal validity and validity. Or enforceability [18].

Often, the public sector is slow to innovate. More governments are expected to publicly acknowledge the feasibility of exploring blockchain technology in the future.

Despite the fluctuating price of cryptocurrencies, venture capital has not stopped flowing to many projects and development teams , and these teams are building some more exciting decentralized applications (Dapps). 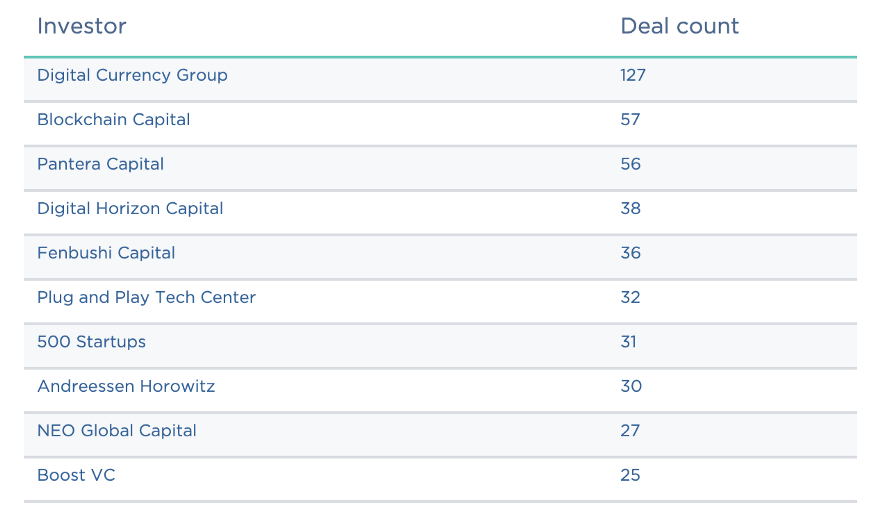 Electric Capital released a developer report [19] in March 2019, tracking the distribution of developers across major blockchain platforms across the cryptocurrency ecosystem. To date, Ethereum has the largest number of core protocol developers, with Bitcoin and Cardano ranking second and third . See below: In the above picture, the number of code submissions of the Ethereum network is 8 times higher than that of Bitcoin and 20 times higher than XRP. Source: Electric Capital
The Truffle Suite provides a powerful set of tools for developing dApps and smart contracts. Truffle is a development environment and testing framework. Since its release in May 2015, it has been downloaded more than 2 million times [20].

From the early days of the blockchain, the Ethereum community has been competing to create a “killer Dapp” ​​that becomes a global utility and proves that one protocol is better than another. But to a large extent, the current state of mind has faded. Few agreements are expected to expand globally, as is Dapp based on the agreement.

Instead, the Dapp industry has evolved into a cluster of both early and more mature projects , all of which are dig deep into Dapp's use cases to meet the greatest demands, achieve the best UX and maintain optimal security.

Broadly speaking, in the past year, financial Dapp (including exchanges, DeFi, etc.) has become the focus of Dapp developers .

Of the top 50 Dapps ranked by Dapp status (based on "Multiple factors including active users, tx volume, developer activity, CTR, and user recommendations"), 29 Dapps are based on Ethereum .

Perhaps most illustratively, of all the categories and platforms, 44 (88%) of the top 50 Dapps with the most active developer activity are based on Ethereum; according to statistics from the State of the Dapps, Ethereum still has the strongest developer community. See below: 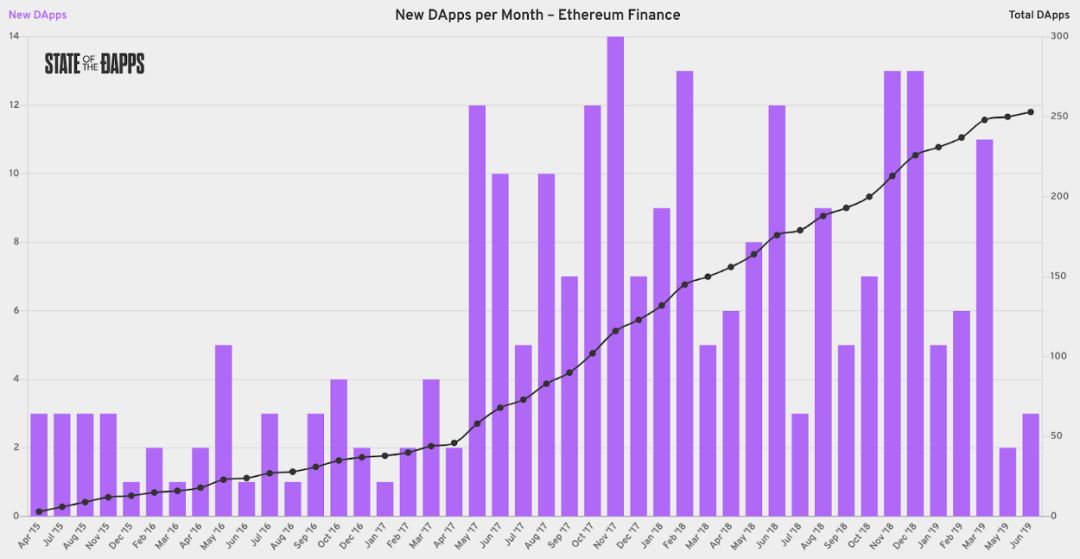 Above: Monthly trend of trading volume (USD) for various Dapps based on Ethereum, source: [22]

For Ethereum, it is unlikely that the rest of the 2019 period will slow down its growth. In recent weeks, the cryptocurrency market has broken the stagnation and revived the interest of retail and institutional investors. As far as the Ethereum agreement itself is concerned, it is planned to carry out the Istanbul hard fork upgrade in October 2019 [23]. The current upgrade for Istanbul contains 11 proposed improvements, which will be the last upgrade to the current Ethereum old chain before the release of Serenity Phase 0.

Serenity Phase 0 (Beacon Chain) is scheduled to start in early 2020. Serenity will undoubtedly become Ethereum as Ethereum core developers and broader ecosystems turn their attention to the realization of PoS and the commitment to enhance Ethereum's expansion. And the blockchain community was hotly discussed in the second half of 2019.

Disclaimer: The content set forth above represents only the views of the author and does not constitute any investment advice or advice. 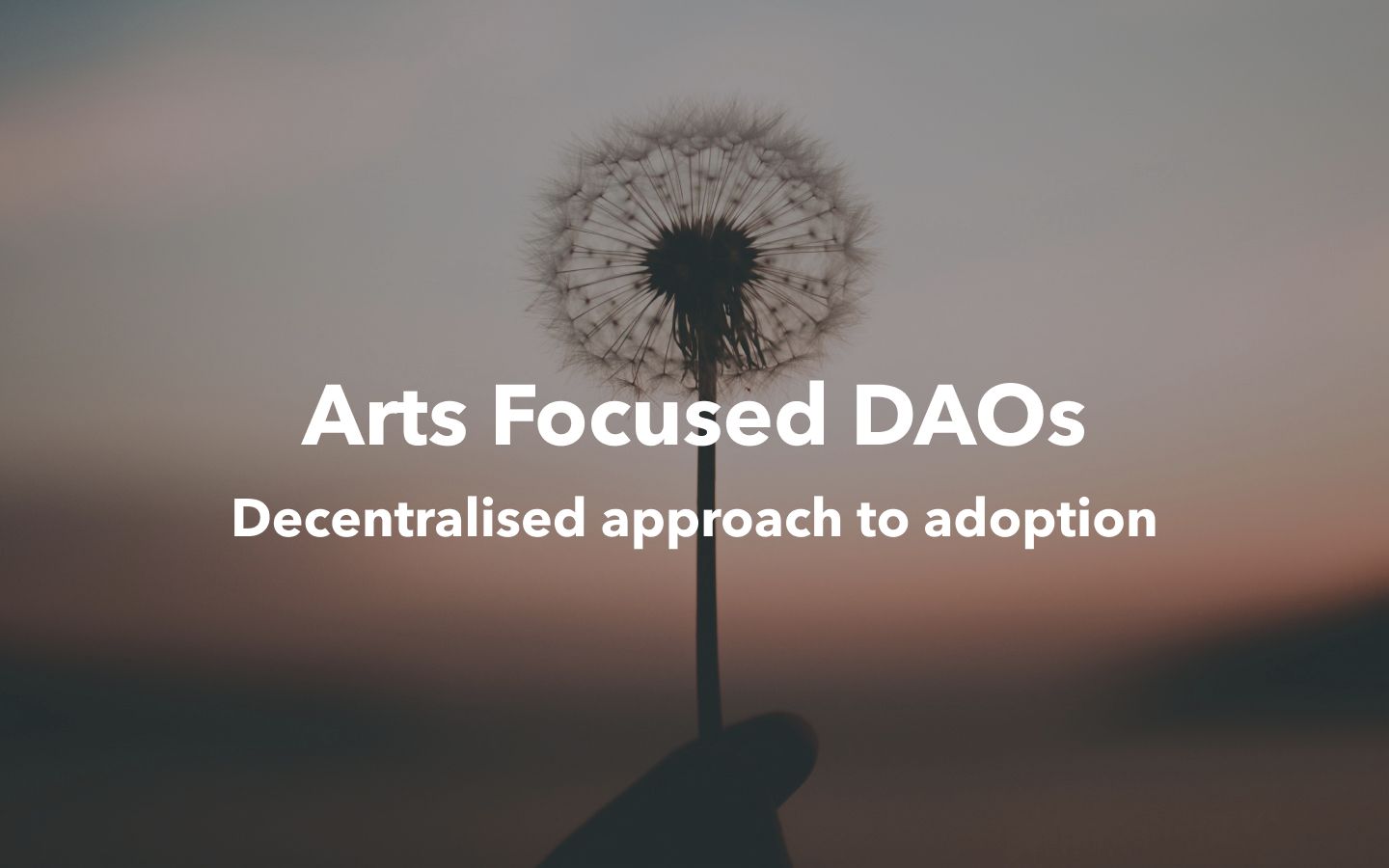