"In addition to Bitcoin, other currencies will return to zero later!" – I heard this sentence two years ago, I may immediately refute it; but now, it seems that some reconsideration needs some consideration before. 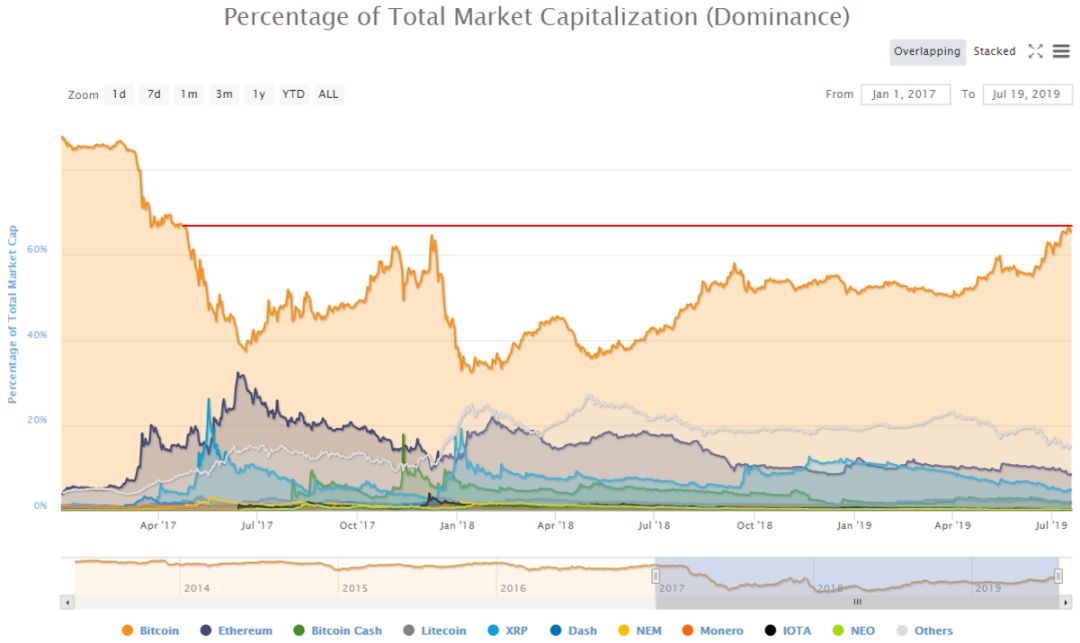 Proportion of currencies in the market in the past two years (Image taken from: Coinmarketcap)

In the latter part of last month, the competitive currency market did not catch up with the price of bitcoin, but in this wave of rising prices, it constantly lost its market share. According to Coinmarketcap's data, its current market value has fallen below 35% in the market, lower than the level before the IC0 explosion in 2017. However, not only the price, but also the influence of the competition in terms of market volume, scale development, technology application, etc., has gradually fallen behind.

Speculation is exhausted, leaving only the chicken feathers

The popularity of IC0 in 2017 injected more fresh blood into the competition currency market; the number of new currency added in the year reached 764, an increase of 10.57 times. And over the next year or so, the number of new currencies in the cryptocurrency market continues to show an exponential growth trend; cut-off so far, only Coinmarketcap has more than 2,400 cryptocurrencies, 3.9 times two years ago. . New additions to the number of digital currency currencies from 2013 to 2018 (data from: Coinmarketcap)

However, this development momentum has not continued this year. More than half of the time in 2019, the number of new cryptocurrencies included in Coinmarketcap is only 301, which is less than the growth level in 2014. And it is not difficult to see the data of 2018. The competitive currency market does have a faltering precursor .

Last year, the scale of the competitive currency market has doubled in one year; however, combined with the enthusiasm of investors to participate, the crowdfunding situation of the new online projects has long been pessimistic. According to IC0Bench, there were 1012 new projects raised in the year, which was 1.35 times that of 2017; but the total crowdfunding amount increased by only 15% compared with last year. This means that the average amount raised per project in 2018 is less than half of the 2017 average. If it is calculated on a monthly basis, from the middle of last summer, its monthly fundraising amount has not reached the average monthly crowdfunding level in 2017.

Data and screenshots from: IC0Bench

What's more interesting is that the crowdfunding duration of the new online projects shows a trend of rising month by month. From less than a month in the past to the length of nearly three months now; but even so, there are still a large number of projects that cannot complete the pre-set funding goals in the crowdfunding period. 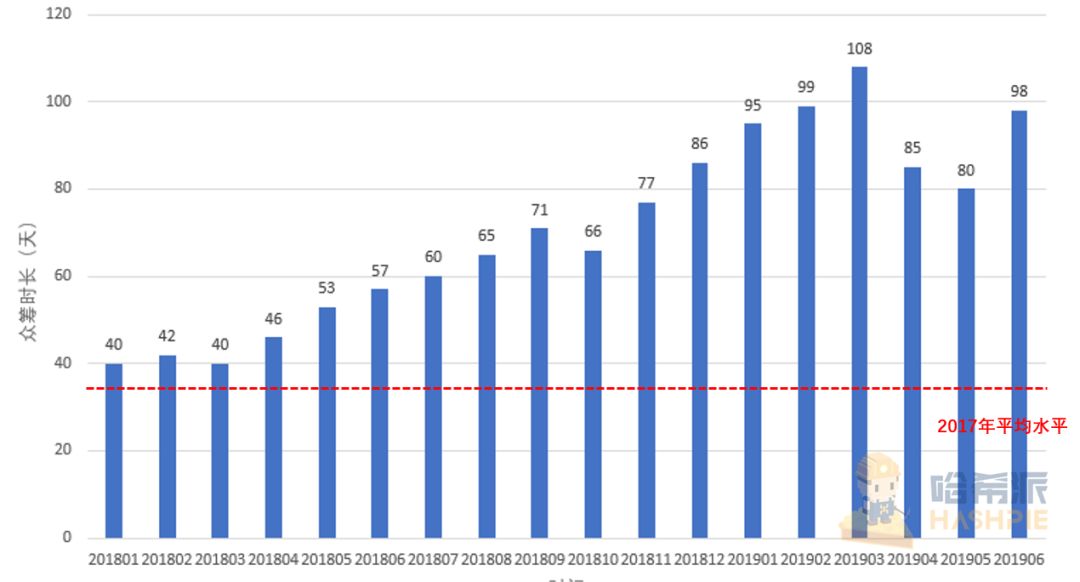 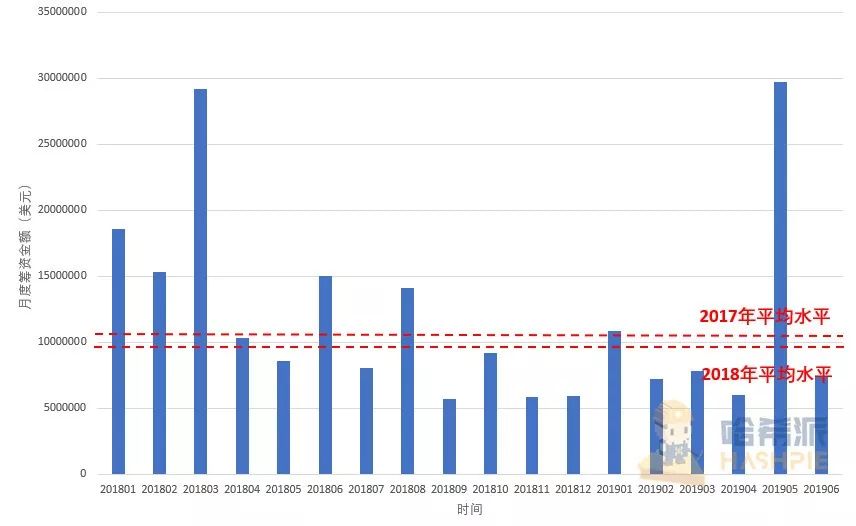 According to incomplete statistics, 482 new online projects completed crowdfunding in the first half of this year, but more than one-third of the funds raised were from the top ten star projects; for example, the Bitfinex platform coin LEO, which peaked in May, At the beginning of the year, it raised $143 million in GCBIB. However, the follow-up development of these projects is not satisfactory, and the negative income, the plunge on the line, and so on are all commonplace.

More straightforwardly, the market is losing interest in tokens or competitors; this phenomenon can also be reflected in the shift in investor focus on the project in the past two years – the 2017 market is a concept and innovation. In 2018, we must pay attention to professionalism and feasibility. As for this year, we must rely on marketing strategies .

2017 is a first year for the competitive currency market; many current mainstream currencies are also the product of the market outbreak during this period. According to Coinmarketcap's data, the bitcoin market share fell below 38% on June 19 of the same year, only less than eight percentage points ahead of the second-ranked Ethereum. It is not an exaggeration to say that as long as there are good concepts and certain market exposures in the development stage, it is easy to raise considerable funds; even if investors close their eyes, they may be able to double their profits, such as the top ten in the year. One-third of the cryptocurrencies are new projects that were launched in 2017. However, due to market chaos, regulatory tightening and bear market, investors have become more cautious about the new currency; it is difficult to raise funds for projects without multiple professional advisory platforms. According to ICOBench's statistics, there are at least four experts on the line in 2018; however, the crowdfunding failure rate of related currencies is still as high as 59%, and the rate of breaking the currency is more than 70%. To make matters worse, the top ten celebrity projects last year were all over 60% and failed to go online. Annual income of the top ten projects in the 2018 crowdfunding amount (data from: IC0Bench)

As the first channel for emerging currencies to enter the market for the first time, IC0 quickly entered the cold after reaching its peak; and the field began to look at the more credible way of sending money on the surface of STO, IEO, ILO, etc. No, STO did not really flow. At the end of 2018, it was not long before the hot money circle was discussed. At the beginning of 2019, it lost popularity, and the number of related new projects went online.

As for the IEO, although the Q1 brought a bull market hope to the market, the attraction of the hunger marketing and the new concept of the currency to the market quickly became ineffective. Coinschedule's latest data shows that after the IEO hit a new high of $1.1 billion in global financing in May, the amount of financing in June plummeted to $100 million, lower than the April level. On the other hand, the increase in the IEO projects of the three major exchanges has declined to varying degrees, and the fire coins and OKEx have even broken projects. The heat is gradually fading, the premium is gradually decreasing, and the break rate continues to increase. Even if there is a trading platform endorsement, IEO is as difficult as the ICO model currency and ILO. The reason for this phenomenon is very simple. Compared with the operation of holding money in the early years, investors who have already figured out that the market routines are more inclined to make quick decisions. To be fair, it is the game rules of the current market to grab fast and throw early. Many people believe that this is the result of the bubble's fading investment returning to rationality; but from another perspective, it is not the disappointment of market participants in the development of the field .

Technology stagnation, can only entertain themselves in the community

Market chaos and unclear government attitudes are undoubtedly affecting the enthusiasm of market participation. However , it is still the reality that the technical process of the field is delayed, the ecological development is slow, and the application is delayed .

Although the issue of technology and landing has become a commonplace, it is indeed the status quo that the market urgently needs to face, and it is also a fundamental problem that needs to be solved in the subsequent development of the field. In fact, from the development of the past years, Bitcoin should be regarded as the only real application in the blockchain field, and is now being accepted by traditional finance and even the mainstream market; and the competition currency market is led by Ethereum and EOS. The development of the chain 2.0 and 3.0 products is still in the discussion and exploration stage.

The concepts of “blockchain technology” and “smart contract” are the mainstream of the bull market in 2017, and the development of public chain projects has become the focus of the 2018 competition currency market. However, these claims to solve the problem that the blockchain is unlikely to be a triangle problem, and most of the projects that have become Web3.0 are still in the development stage; and the project that the main network has been on the line has been officially put into use and has gradually formed an ecological prototype. . According to an article published earlier in the Wall Street Journal, current market participants have invested nearly $1 billion in various DApp projects, but their results have been unsatisfactory. According to data from the market data website DappRadar and State of the DApps, there are more than 2,700 DApp applications in the market, but only 19 of the daily active users exceed 1,000, and the proportion of active zero is as high as 70%. It is also worth mentioning that from the new data of the monthly DApp, the development of the community seems to have declined. Since the beginning of January this year, the number of DApps has shown a significant downward trend. 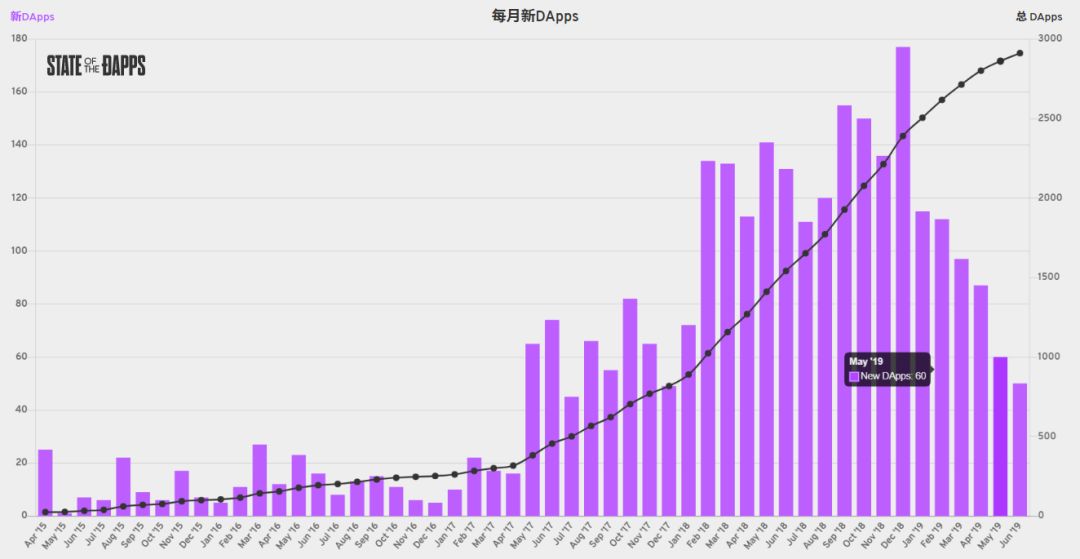 At present, there are more than 2,500 DApps in Ethereum, where the development of DApp is better. However, the total number of daily active users in the platform is far less than that of EOS with less than 500 DApps. While the average daily active users of each project in EOS and TORN are higher than those in Ethereum, most of the traffic comes from gaming games. Therefore, the current support for the DApp ecosystem is more speculators than users .

Of course, even if the market can run out of star projects, the current level of public chain projects can not withstand the influx of large flows. Earlier, V God said in an interview with Dailyhodl that the underlying blockchain platform needs up to 100,000 transactions per second to maintain long-term sustainable development. However, as shown in the data in the following table, the upgrade process has been delayed, and the Ethereum transaction processing speed that has not been realized by the expansion plan is still kept at 25 strokes/seconds a few years ago; and it is said to build a million-level TPS EOS. The highest TPS developed so far is less than 3,000 pens per second, which is far from the million or 100,000 levels.

Part of the data comes from: blockchain叁

Prospects, the competition can rely on what to support the market

Many people believe that the return of rationality in the bubble burst investment will promote the benign development of the competitive currency market, and the quality projects that truly understand technology will also surface. However, the slow development of technology at this stage has greatly hindered the development of the market; after the boom has returned to the big waves, we are welcoming more visions and time-delayed technology upgrades. With the patient's patience and the exhaustion of faith, the market interest can be turned into endless speculative projects and marketing methods; and when the speculative effects of these methods are gradually lapsed, then what can the competition coins support? Market .

As the saying goes, ten years of grinding a sword. In the competition currency market, this sword has to be worn for a long time, and it is still far away. However, from the situation of the collapse of the competition coin market last month and the bitcoin sucking blood, the expectations and patience of investors in the field seem to last for a long time.

The scenery is good here!…

MoneyGram plans to expand its partnership with Ripple