But even with 13 seconds, SWIFT's interbank settlement system will eventually be replaced by the blockchain platform in the eyes of many blockchain practitioners and determined reformers. Since the emergence of blockchain technology, its distributed, decentralized, peer-to-peer, and non-defective features have provided instantaneous, secure and transparent services for cross-border payments, which has greatly impacted the existing cross-border payment system.

“The cross-border payment system is undergoing a major transformation.”

This is the first sentence written by SWIFT in the latest edition of the gpi (Global Payment Innovation Service) white paper. At the end of 2016, the first phase of the SWIFT gpi project was completed; in April 2017, DLT PoC (Distributed Ledger Technology Verification) was officially launched as part of gpi, and SWIFT gpi was launched on the blockchain technology; afterwards, SWIFT continuously updated the gpi system and DLT PoC technology, incorporating blockchain technology into cross-border payment services.

Many banks have withdrawn, SWIFT transformation is intended to provide frictionless intermediaries

Founded in the 1970s, SWIFT's vision was to create a global financial messaging service and a common language for international financial messaging. After the launch of the messaging service in 1997, SWIFT replaced the widely used Telex technology at the time, providing original services mainly including messaging platforms, computer systems for verifying and routing messages. At the same time, message standards are developed to enable people to jointly understand data across language and system boundaries, and to enable seamless, automatic transmission, reception, and processing of communications between users.

In the more than 30 years since its establishment, SWIFT has been widely accepted internationally. At present, most banks in the world have used the SWIFT system, including China's Bank of China, Industrial and Commercial Bank, China Construction Bank, and Agricultural Bank of China. According to the data disclosed on its official website, in the 30 years from 1979 to 2009, the number of international companies joining SWIFT has increased from 15 to 209, and the number of bank members has increased from 239 to 9281. 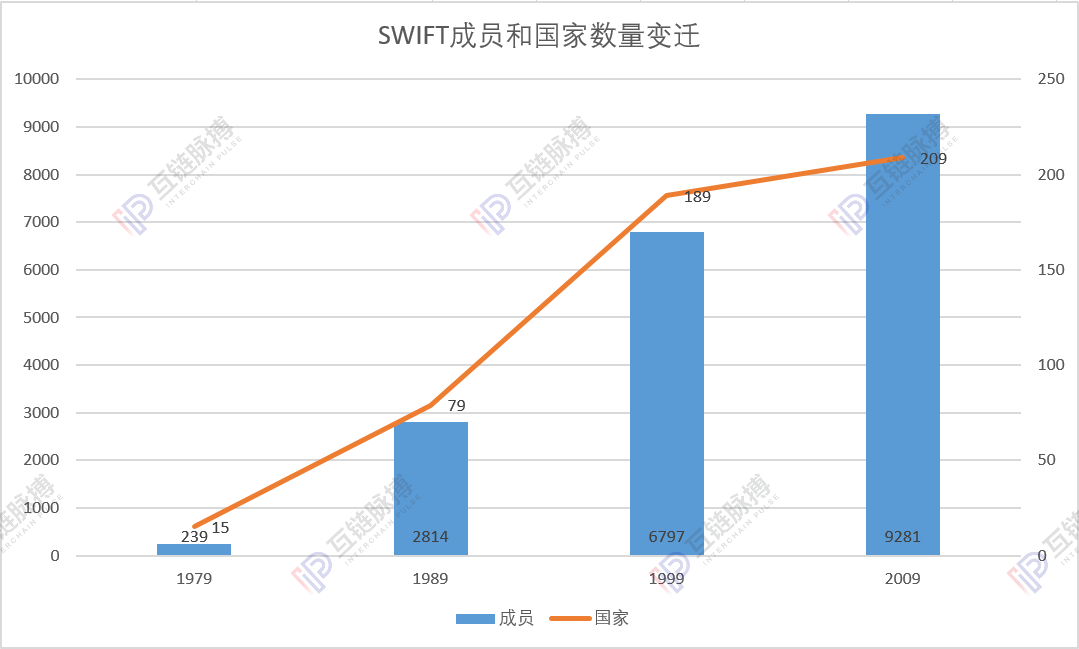 However, in recent years, due to the emergence of blockchain technology and the turmoil in the international trade situation, SWIFT's steady development momentum has been hindered. At the same time, SWIFT's long arrival time has also been criticized. Forbes analyst Joseph Young said in December 2018 that the SWIFT system is now 45 years old, the efficiency is very low, and the international wire transfer takes 3-5 business days to settle, and if there is no document, it is impossible to send Large remittances, but Bitcoin can handle a large number of transactions more efficiently.

Currently, SWIFT has not disclosed the latest number of partner countries and organizations. The inter-chain pulse query public information found that some countries and banks are withdrawing from SWIFT.

On July 18, Reuters quoted anonymous sources as saying that the Japanese government is trying to establish an international cryptocurrency payment network similar to SWIFT, with the motivation to effectively combat money laundering. On May 23, 2018, Jose Dakak, a major shareholder of Banco Masventas Bank of Argentina, said that the bank would withdraw from SWIFT and begin to use Bitcoin blockchain technology to solve international payment problems. In June 2018, the Russian Enterprise Treasury Association announced that it would try to replace the SWIFT with the central bank of the country to try out the government-operated Masterchain blockchain platform.

In addition, even SWIFT's Europe is also interested in moving away from SWIFT's existing system. On August 21, 2018, German Foreign Minister Heiko Maas made it clear and public that the EU must establish a European payment channel independent of SWIFT in the United States. At the opening ceremony of the 2018 Berlin EU Foreign Ministers Meeting, Mas revealed that he has conducted research on the proposal to establish a European independent settlement system.

In this situation, SWIFT launched gpi. The Gpi white paper states that the primary goal of adopting gpi is to ensure that international payment processes meet the industry's requirements for speed, transparency and a better end-user experience. The agency banking ecosystem will also re-create itself through gpi, and finally promote the community to establish a frictionless intermediary model that provides efficiency and added value.

Since the completion of the first phase of the gpi project at the end of 2016, SWIFT's gpi and blockchain applications have entered a new phase each year.

In 2017, SWIFT launched a new system and officially launched DLT PoC to complete the infrastructure.

In 2018, the SWIFT gpi project entered the technical preparation phase. On January 22, 2018, Swift signed a memorandum of agreement with seven central securities depositories to study how the blockchain can be applied to post-trade processes, such as proxy voting. On November 13, 2018, the SWIFT Association signed a coexistence agreement with Smart Worldwide Financial Technology (SWFT Blockchain). In November 2018, SWIFT India has partnered with financial technology company MonetaGo to pilot a distributed ledger technology (DLT) network designed to improve the efficiency and security of financial products.

In 2019, the SWIFT gpi basically entered the landing stage. On January 30, 2019, SWIFT officially announced the proof of concept (PoC) program in cooperation with R3. After that, in March, six Spanish banks launched gpi; in May, the gpi business was expanded to the European market; in June, the report said that after the success of the R3Corda platform concept verification, it will be “very soon on the trading platform based on distributed ledger technology”. Enable GPI payment on"; in July, cooperate with Singapore FAST to achieve instant cross-border payment, up to 13 seconds… 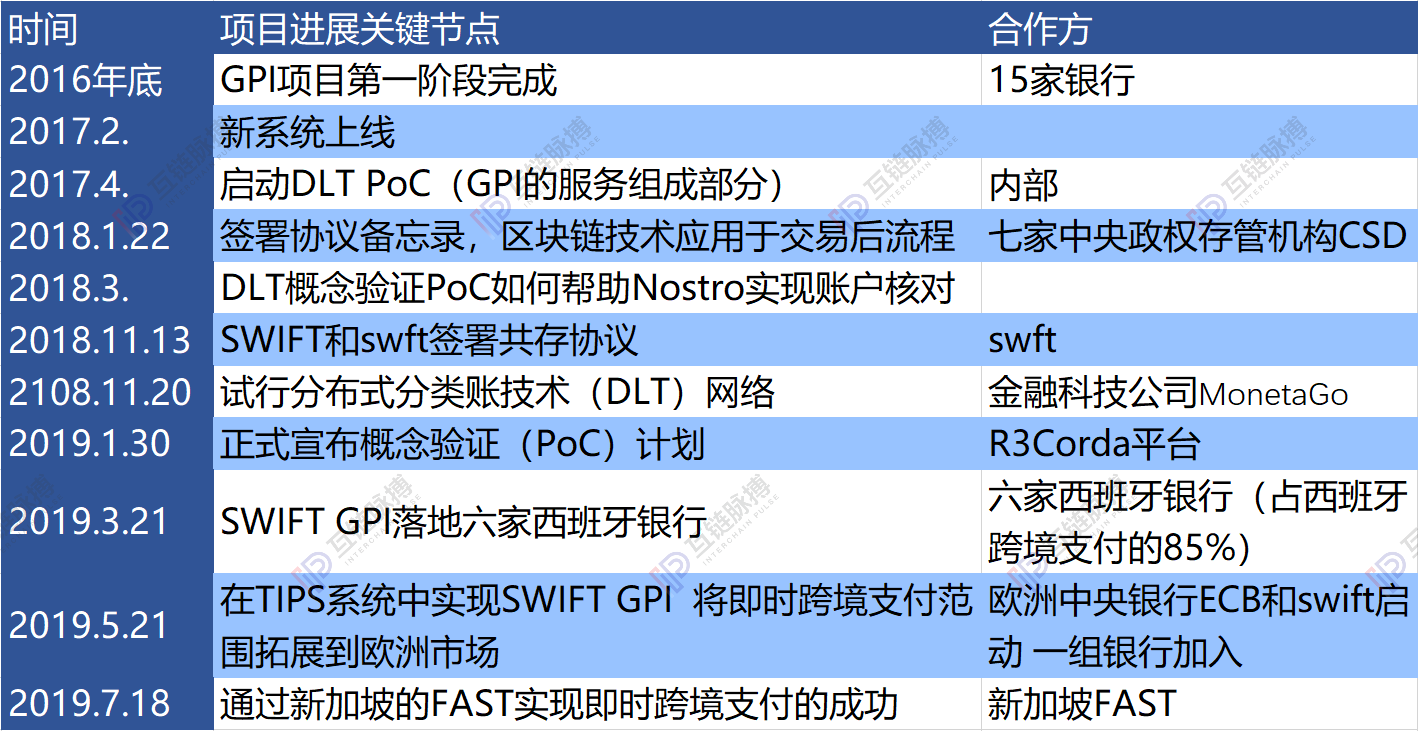 Does cross-border payment still require an intermediary and SWIFT

On the one hand, SWIFT has been exploring blockchain technology for the past two years and integrating it with existing businesses. On the other hand, SWIFT does not believe that the blockchain can directly ban the existence of centralized clearing institutions. It still believes that the proxy model is a strong and valuable foundation on which to build a future cross-border payment model.

According to information disclosed by SWIFT, gpi significantly increases the speed of cross-border payments. With SWIFT gpi for fast payments, more than half of the more than 400,000 end-to-end gpi payments sent each day reach the beneficiary's account in less than 30 minutes, many of which are completed in seconds. – Simultaneously send real-time credit confirmations to the originating bank. The other 50% of gpi payments are almost always credited to the ultimate beneficiary within 24 hours.

Although SWIFT is now aiming to provide a frictionless, efficient intermediary, it has been small and effective. But against the voice of SWIFT, it is believed that the centralization model practiced by SWIFT should not exist. The future cross-border payment should be de-intermediation, point-to-point instantaneous transaction, and many blockchain platforms indicate that it will replace SWIFT. In addition, as Russia, Japan, Germany and other big countries have begun to withdraw from SWIFT and intend to conduct cross-border payments on their respective blockchain platforms, the question of whether cross-border payments still require a fixed global agent has been heatedly discussed.

On November 14, 2018, Ripple CEO Brad Garlinghouse bluntly stated, “We have no intention of working with SWIFT and are aiming to replace it.” Jiang Peng, deputy director of the IT Innovation Lab of Financial Products Management Department of CITIC Bank, also said that Domestically, the blockchain can completely replace SWIFT, realize the independent and controllable domestic letter of credit exchange, and has already landed.

Not only is there a severe external competition, but there are also huge problems with the blockchain technology used within SWIFT. Previously, the author of the Inter-Chain Pulse column and the national “Thousand Talents Program” special professor Cai Weide once wrote that the old financial market represented by SWIFT, the blockchain makes new technologies and new wines put in old bottles, which may lead to disagreement between old and new technologies.

In the SWIFT project, in order to protect privacy and scalability, the PoC adopted a channel solution, but the actual results were contrary to the vision. Because each bank does not want to share data with other banks, each bank forms a channel with another bank and SWIFT. If the SWIFT system is online, it needs 100,000 channels. This design is actually "soft isolation," which is less of a privacy than hard isolation. At the same time, this design also means that the system has a large center – SWIFT, which is all the data of all other banks of SWIFT, which is contrary to the decentralized design concept, the reliability of the centralized system may be a problem.

The new financial technology company represented by IBM can directly skip the SWIFT platform when providing cross-border payment. Moreover, its system efficiency and scalability have great room for improvement. The use of new processes and the adoption of distributed execution and management have all laid the technical foundation for replacing SEIFT.

However, compared to emerging cross-border payment platforms, SWIFT may also have its own unique game capital in terms of regulatory level and resource accumulation.

Alain Raes, CEO of SWIFT Asia Pacific Europe and Africa, said in May 2017:

At the same time, the strong banking resources that SWIFT has accumulated over the past forty years are unmatched by any other platform. As SWIFT puts it: “The 11,000 banks currently connected to the SWIFT network can easily integrate gpi into their current infrastructure, unlike other cross-border payment models that require extensive integration with existing banking infrastructure. ""

Former Cisco CEO: Facebook needs to work hard to reshape the trust of the public and the public