The US Treasury Secretary stated that more cryptocurrency regulations will be introduced; Zuckerberg nods and will work with regulators.

The cryptocurrency is no longer a place of extravagance, at least from Libra, and the frequency of regulation of this word with cryptocurrencies has soared like a rocket.

On July 24, US Finance Minister Mnuchin publicly stated that financial regulators continue to focus on all cryptocurrency assets and may introduce more regulations to ensure the security of the US financial system. Previously, Mnuchin also specifically targeted Libra, and the government has made it clear to Facebook that it needs to comply with our regulations before Libra launches.

On the same day, Facebook founder Zuckerberg made a commitment through his social networking site to work with regulators to properly resolve issues related to Libra.

Last month, we announced that we are working with 27 other organizations to form the Libra Association. The association will create a new currency called Libra that will be powered by blockchain technology.

The Libra Association will be independent of Facebook or any other member, but we plan to support this currency in our services. The goal is to enable billions of people around the world who use services such as WhatsApp, but who may be excluded from banking services, to use a secure, stable, well-regulated cryptocurrency.

Both Facebook and the Libra Association plan to work with regulators to help them address all concerns before Libra is ready to launch.

We worked with other potential members of the Libra Association to publish a white paper in advance that clearly outlines the Libra concept so that we can address these important issues in public and work with policy makers to solve this problem. . In the UK, Damian Collins, chairman of the House of Commons Digital, Cultural, Media and Sports Committee, expressed serious doubts about Facebook's commitment to protect Libra users' financial data. This also means that Facebook or the UK will once again face hearings about Libra users' privacy issues.

For Bitcoin, which is not inferior to Libra, the regulator's attitude is to “patches”, that is, problems are solved. Mnuchin has repeatedly reiterated concerns about the use of Bitcoin for many illegal activities in recent times and stressed that the US government will have a working group to combat this crime. He also said that he was very worried that consumers would not understand the speculation of these things.

"I can guarantee that Bitcoin will not be talked for for 10 years. I can even bet that within five or six years, I will not talk about Bitcoin as the Minister of Finance. I personally will not hold Bitcoin."

Cryptney currency analyst Joseph Young reposted the US Treasury Secretary’s comments on cryptocurrency concerns: I am optimistic about the long-term trend of Bitcoin and the entire encryption industry, but I think recent events may continue to exacerbate the height of the encryption market. fluctuation. Earlier, Young said that Bitcoin has shown high volatility in the past week. Since June, sales pressure has been high, and regulatory uncertainty is affecting many blockchain companies; it is time to build a strong Investment theory and a more careful observation. 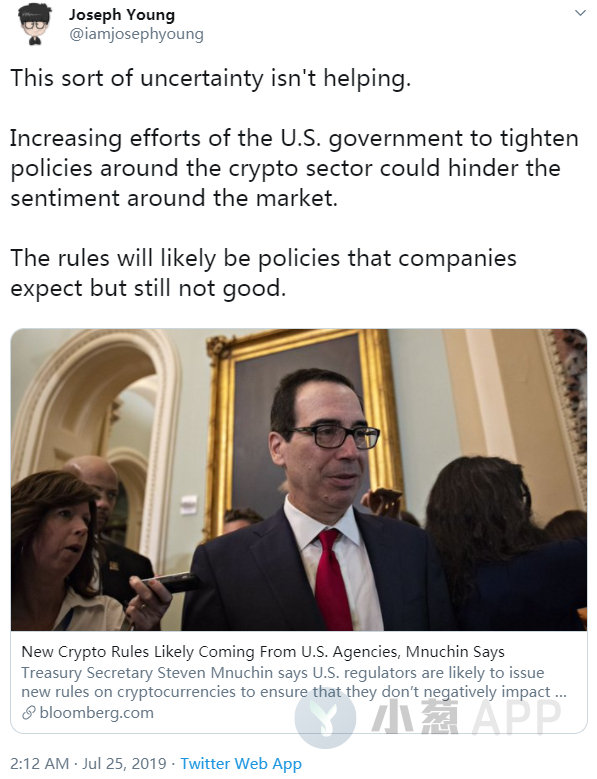 Libra is widely regarded as the main competitor of Bitcoin. Libra is expected to be launched in the first half of 2020, with the vision of anchoring a basket of currencies to avoid the volatility of the market like Bitcoin and other cryptocurrencies.

Last week, the G7 central bank governor and finance ministers meeting was held on the outskirts of Paris. During the two-day meeting, participants issued a series of warnings to Libra that it was not conducive to the development of the global economy. In the statement after the meeting, the G7 central bank governor and the finance minister agreed that Libra may affect the monetary sovereignty and the operation of the international monetary system, which will lead to serious regulatory and systemic concerns, as well as broader policy conflicts. All need to be resolved before Libra goes online.

It is worth mentioning that the US legislators will hold a hearing on the blockchain at the end of the month. On July 30th, the US Senate Bank, Housing and Urban Affairs Committee will hold a hearing to review the regulatory framework for digital currencies and blockchains. The participants at the hearing included Jeremy Allaire (Circle co-founder and CEO), Rebecca M. Nelson (congressional trade and finance expert), and Mehrsa Baradaran (Professor of the University of California Law School). This is the second hearing of the blockchain in a month after David Marcus, the father of Libra.

Mt.Gox compensation was postponed for 5 months, and the deadline for submission of the aftermath was extended to March 31, 2020.

Data: Criminals cash $ 2.8 billion worth of Bitcoins through OTC brokers in 2019 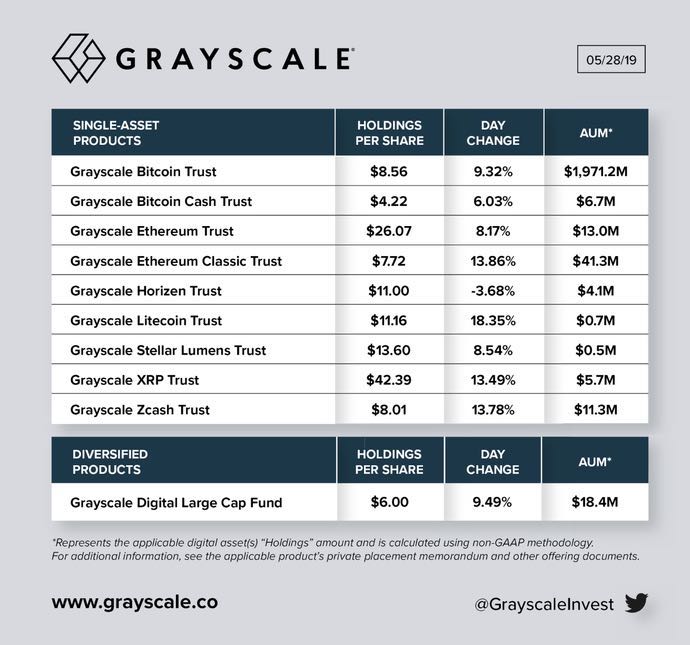