On the occasion of the 5th anniversary of Ethereum ICO, let us look at the ecological landscape of the 2019 Ethereum network and the encryption community.

Five years ago, on July 22nd, Ethereum crowdfunding was launched, which has ignited the enthusiasm of many developers, entrepreneurs and entrepreneurs for many years. Today, five years later, the blockchain ecosystem has become more diversified and globalized, and it has been determined on the decentralized road. More and more people have recognized the blockchain and understood its importance. Sexual and positive meaning.

Throughout the year, after experiencing a sharp fall in the encryption market, the blockchain ecosystem ended in 2018 in the wounds. The much-watched “bear market” topic has gradually been replaced by such a consensus: although the market price is still unstable, the whole industry has already passed through the winter and gradually warmed up, which reveals a strong and stable ecological environment. system. Especially for Ethereum, in 2019, it was a trend of activity, attention and self-improvement.

It’s just over halfway so far this year, but the leaps and bounds of Ethereum are unstoppable.

Since its inception, the Ethereum main network has handled more than 500 million transactions (as of July 17, breaking the 500 million mark). In 2019 alone, more than 130 million transactions were processed, and its network utilization rate was fairly stable, with an average utilization rate of nearly 90%. There are more than 70 million unique addresses in Ethereum, and the number of newly created addresses since the beginning of the year is 16 million (about 16%).

On June 1st, there were 616,000 active addresses on the network for trading, the highest in 2019. The current total supply of Ethylene (ETH) is 106 million, averaging to 2.28 ETH per address. If the address of the top 500 Ethereum is not included (37% of the total supply), the average ETH holding for each address is 1.43 ETH.

In February of this year, the Ethereum network upgraded Constantinople, plans to upgrade the network through the hard fork and approach the multi-stage Serenity stage, including the transition to the Proof of Rights (PoS) consensus mechanism. The update of the hard fork of Constantinople contains a total of 5 EIPs (Ethereum Improvement Suggestions). It is worth noting that EIP 1234 reduced the block reward from 3 ETH to 2 ETH, a change called “The Thirdening” (half the third block reward).

So far in 2019, the most mentioned in corporate activities is the issue of "privacy."

Facebook's Libra project is full of ideology, regulation and technology considerations, as well as an ode to user privacy. The PegaSys project supported by ConsenSys introduced the Trusted Compute and Privacy component called Orion in Pantheon 1.1, released in April, to address corporate concerns about the privacy of Ethereum. In May, Ernst & Young issued a set of standards and agreements to increase the privacy of private transactions on the Ethereum public chain. The project, called "Nightfall," is open sourced on Github and seeks to make any token transactions based on the ERC-20 and ERC-721 standards in a "completely private" environment.

Consulting agencies and research companies also affirmed the rapid exploration of companies in the blockchain field. In a June report, Gartner estimated that by 2025, the blockchain will add $176 billion worth to businesses and will increase to $3.1 trillion by 2030. According to Gartner, $1 trillion will come from inter-enterprise and intra-enterprise improvements and opportunities. 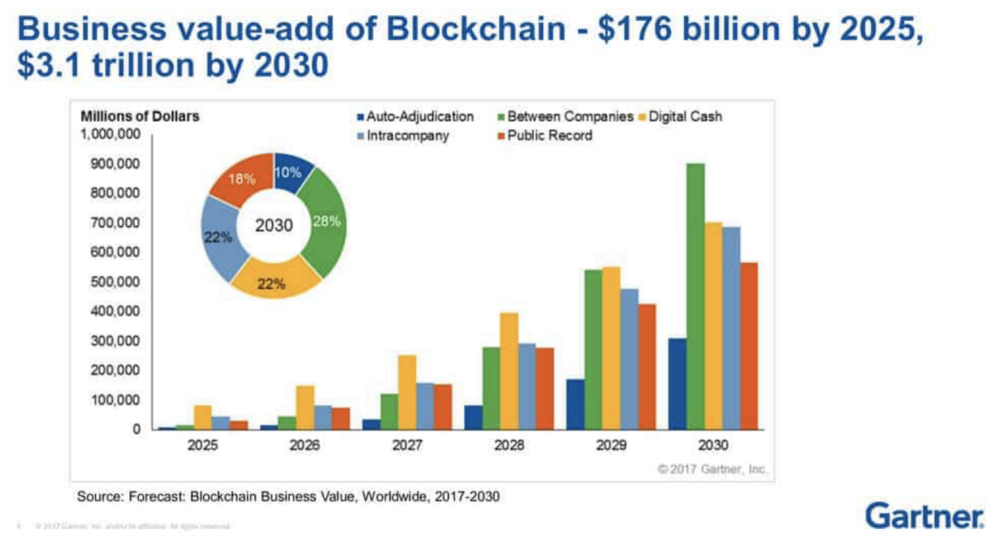 In its report at the end of 2018, Deloitte summarized interviews with 1,000 corporate executives with blockchain thinking and asked about their plans for what to do in 2019 and beyond. 95% of respondents indicated that their company plans to invest in blockchain technology in 2019. Nearly 40% of companies plan to invest more than $5 million. Although 39% believe that the technology is currently “exaggerated”, 84% of respondents believe that the blockchain will eventually be scalable and applied to the mainstream population. Executives in the automotive, oil, gas and life sciences are most optimistic about the blockchain, followed by financial services. 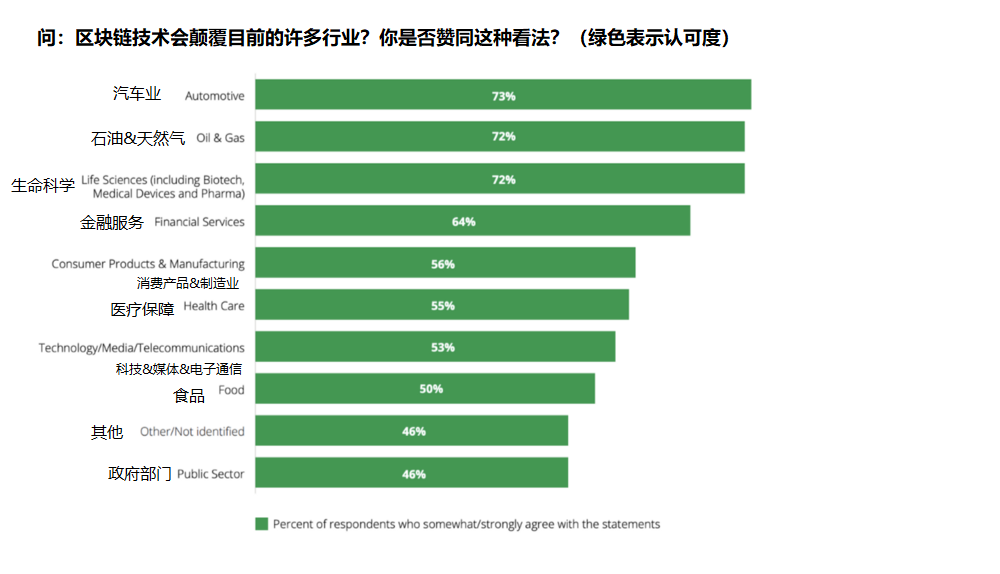 In 2019, governments have moved from investment-exploration blockchains to launching their own pilot projects aimed at modernizing government governance. The Luxembourg government supports blockchain startups through programs such as Mind&Market, Horizon 2020, LHofT, Letzblock and Luxinnovation. The German and Swiss governments have established blockchain project funding projects, namely German Blockchain Bundesverband and Blockchain Federation. 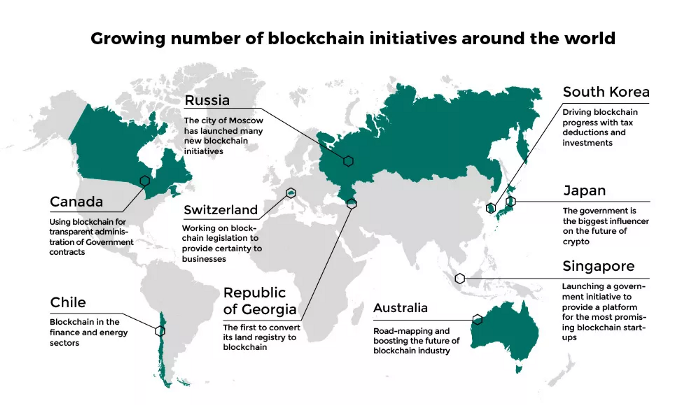 At present, Europe is leading the wave of blockchain: 29 of the 44 European countries have signed a European blockchain partnership and will cooperate to establish the European Blockchain Service Infrastructure (ESBI). In addition to Europe, countries around the world have adapted to local conditions and implemented blockchain strategies to explore use cases that meet their needs. Georgia is using blockchain technology to simplify the land ownership registration framework. China's Changzhou and Alibaba are working together to test whether the blockchain can be used to protect citizens' health data. The Australian government is also applying blockchain technology to important export products. (sugar) management.

Dozens of local and central banks are actively pursuing blockchain-based projects to efficiently address several long-standing problems. UnionBank has released the i2i project for excessive remittance fees. The Central Bank of Brazil is currently studying the use of distributed ledgers for cross-bank emergency payments and flexible systems (SALT projects) and distributed information exchange platforms (PIER projects). In the projects created by the Bank of Thailand, the South African Reserve Bank and the Monetary Authority of Singapore, the use of central currency issued by the central bank (CBDC) seeks to replace the current system. At the end of 2018, the World Bank launched its first blockchain-based bond “bond-i”, which raised A$110 million (equivalent to approximately RMB 528 million), marking the first time that investors have supported the use of blockchain technology. Manage bond behavior.

The United States is taking a wide range of measures to develop regulations and enforce blockchain-friendly legislation. For example, the Governor of Wyoming signed the HB0070 legislation in February 2019, authorizing the Secretary of State to develop and implement a blockchain-based filing system for corporate entities and commercial applications. In March 2019, the Governor of South Dakota signed HB1196 to give a clear definition of blockchain technology for specific purposes. Arkansas also passed a bill (HB 1944) that stipulates that regulations on transactions in smart contracts should not be deprived of legal validity, validity or enforceability.

Generally speaking, the speed of innovation in government departments is relatively slow. However, it is expected that more governments will publicly announce blockchain projects in the future. 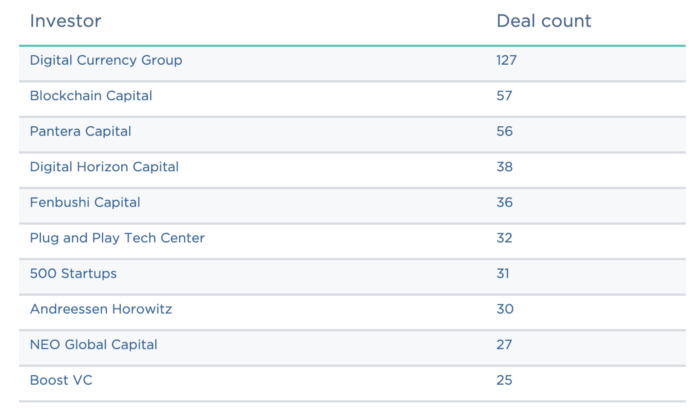 Electric Capital released a development report in March this year that describes how developers are building in the encryption ecosystem. To date, Ethereum has the largest number of core protocol developers, Bitcoin and Cardano are ranked second and third. 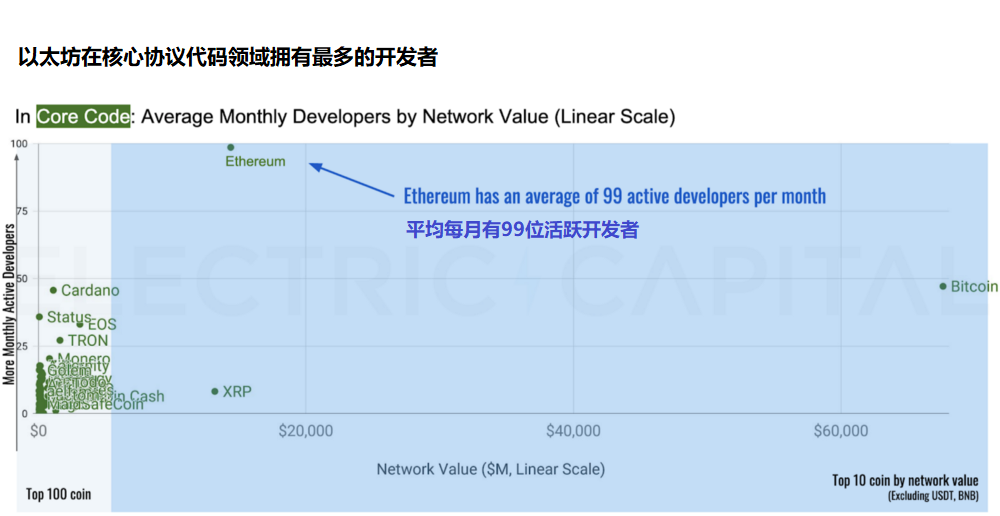 In addition to core protocol development, Ethereum has 216 active developers responsible for the total code each month. The growth rate of Ethereum's developers is strong and stable. In January 2019, there were an average of 240 active developers, an increase of 23% over the same period of 190 in 2018. 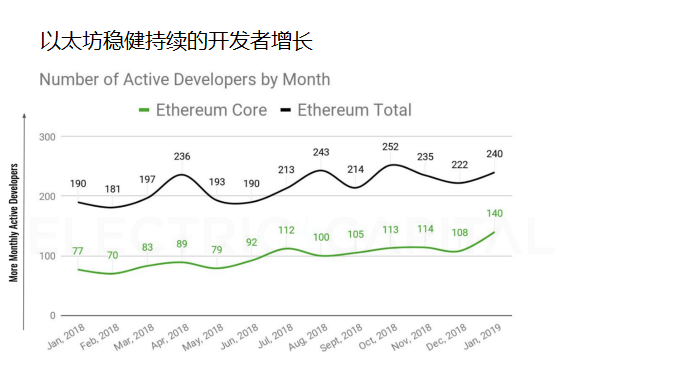 Ethereum is very prominent in the total number of codes, the number of submissions is more than 8 times higher than Bitcoin, and 20 times more than XRP.

Truffle Suite provides developers with a range of powerful dApps and smart contract development tools, from conception to launch. Since its release in May 2015, Truffle has been downloaded over 2 million as a development environment and testing framework. Truffle's second product, Ganache, is a private chain for deploying contracts, developing applications, and running tests on the Ethereum network. Since its release in October 2017, the total downloads have exceeded 1.22 million, only 2019. The monthly download volume is 79,000 times.

Since the beginning of the blockchain development, the community has been competing for “killer apps”. Once the “killer app” is created, it will be applied globally and represents some of the most valuable protocols. In most cases, this mentality has subsided. Few agreements are planned to expand globally, so the corresponding Dapps will not be extended to global applications. Although Dapp's industry development is at an early stage, it is precisely because of this that it is hot and colorful. All Dapp projects are immersed in researching their use cases to maximize demand and provide the best user experience while maintaining security. In general, financial dapps (including exchanges, DeFi, and markets) are the focus of dapp developers over the past year.

In the top 50 dapps of State of the Dapps (its ranking algorithm is based on "multiple factors, including active users, throughput, development activity, configuration, click-through rate, and user recommendations"), of which 29 daps are based on ether Founded by the workshop. When we conduct research based on specific use cases, the advantages of Ethereum are clear:

Perhaps the most telling point is that of all the categories and all platforms, among the top 50 dapps for developer activity, 44 (88%) are based on Ethereum, and only one data is needed to prove that Ethereum remains Have the most powerful developer community. 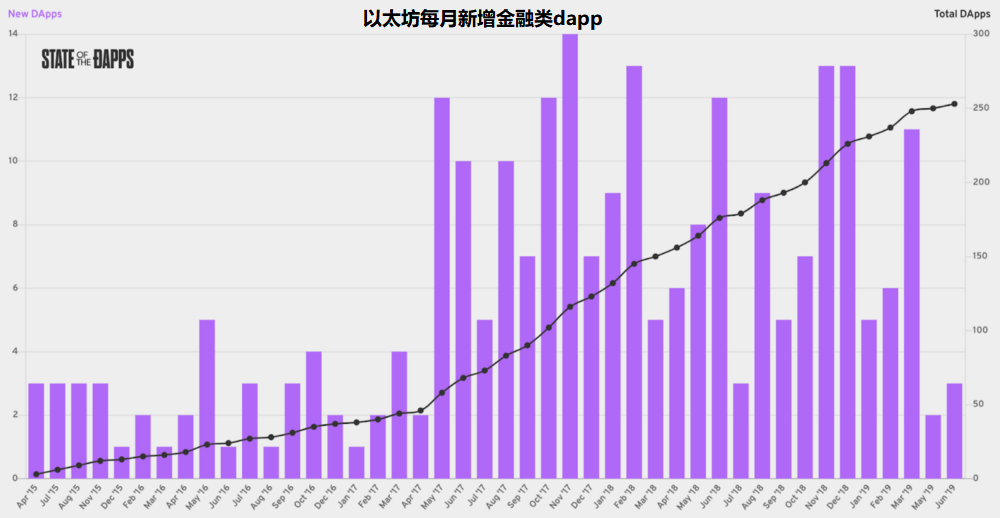 State of the Dapps

For Ethereum, the rest of the 2019 period will not slow down. In recent weeks, the encryption market has moved out of stagnation and revived investor confidence. For the agreement itself, the 2019 power will break out in the hard fork of Istanbul (expected October 2019). The Istanbul hard fork contains 11 improvements to the Ethereum blockchain and is the last hard fork before the official release of Serenity Phase 0. Core developers and an increasingly broad ecosystem will focus on the implementation of Prosperity (PoS) and the promise of scalability. Serenity, which is scheduled to start in early 2020, will undoubtedly become Ethereum and Block in the second half of 2019. Hotspots in the chain community discussion.