Since the short-term BTC surged last month, the pie retraced nearly 40% from the high level and opened the oscillating mode between 9000 and 10000 points.

As one of the best performing assets this year, from the lowest point in 2018 to the present, the pie has risen more than four times and has become one of the best investment assets in the world.

In addition to Libra, Sun Yuchen and other events, the encryption market is also receiving unprecedented attention this year.

The Baidu Index shows that since 2011, the BTC search index has been on an upward trend. Among them, we can see from the picture that during the first peak of BTC at the end of 2013, the BTC search index once hit a new high in China, and on June 24 this year, BTC used the Baidu index of 8376, even more than 16-17 years in China. Real estate (up to 7256 index).

In terms of Google Trends, the trend of the BTC Google Index is highly consistent with the trend of the currency. It is undeniable that BTC not only performed best this year, but also one of the most well-respected assets in the current investment field.

While BTC maintains high heat, but as a highly volatile digital asset, many currency holders have been scrambling where the bottom of BTC is? Where is the high point? Investors who have been on the lookout are waiting for a suitable entry opportunity.

First, judge the bottom of BTC from the price of the shutdown currency

At the end of last year, due to the sharp drop in BTC prices, a large number of mine closures and mining machine sales were caused. As the biggest source of BTC network security, the income of miners actually affects not only the price of the currency, but also the future development of BTC.

Also in the same year, in order to give miners a more intuitive reference to the profit and loss situation, f2pool has released a "shutdown currency price". 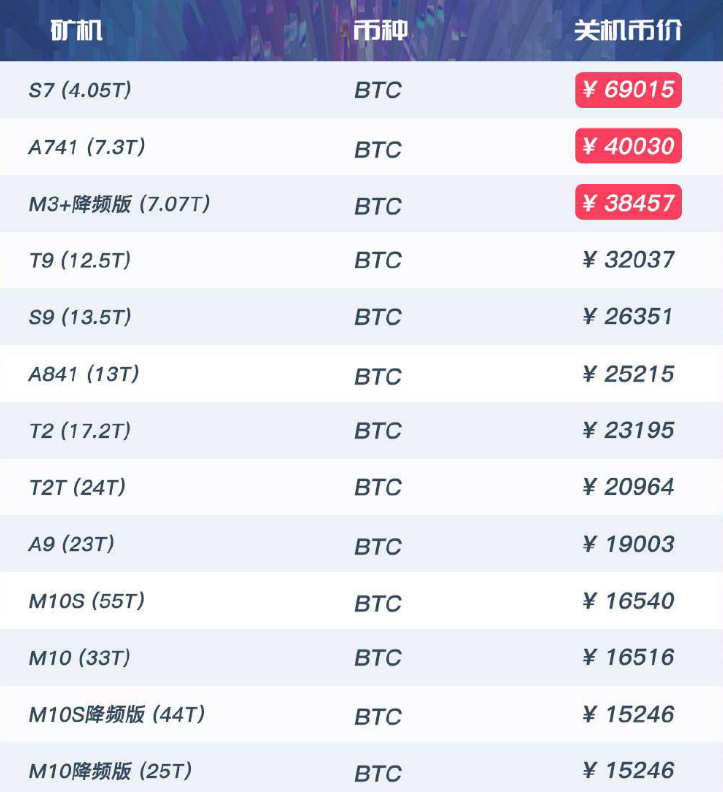 According to the BTC miners' cost at that time, most of the mine's "shutdown currency price" is around 20,000CNY, and more mines also favor this kind of mining machine with higher computing power and lower mining cost.

At the same time, last year's BTC was around 22,000 CNY at the lowest level. Under the influence of many extreme events last year, it failed to break through this barrier.

This is because when Nakamoto was developing the BTC issuance mechanism, in order to give the miners the incentive to maintain the power of cyber security, the result of the competition competition was the reward standard, and the miners who won the competition won a certain BTC reward. As the absolute upstream of the BTC industry chain, the bottom of the BTC price maintains a delicate balance with the “shutdown currency price” of most mining machines.

Recently, Li Qiwei, the “King of the King of Escape”, gave an explanation in the online interview with Australian media ZyCrypto: the halving of the upcoming LTC award may cause the encryption market to be blocked and cause prices to fall. A halving of the reward means that the miner will now be reduced to a 12.5 LTC by the 25 LTC.

However, he also said that after some miners are squeezed out, the price will gradually return to normal as the mining difficulty is automatically adjusted.

Let's leave aside whether LTC will be put into a box after August 6th (production reduction day), but from the tone of Wright's Emperor, we can clearly see that the price of the coin maintains a subtle relationship with the "shutdown currency price". Become the consensus of long and short.

Over time, this year, with the upgrading of mining machines, BTC production and other factors, the "shutdown currency price" has also been adjusted.

The currency 哩 重新 recreated a set of shutdown currency prices based on the data provided by f2pool.

From the figure, we can see that due to changes in the power, cost, and difficulty of the mainstream mining machine, the average price of the shutdown price has risen to 32658CNY this year, and the US dollar is 4733 US dollars, and the lowest is 3143 US dollars (and One round of the bottom is close)

However, we must also consider the impact of the reduction of sentiment, the current trend of BTC has completely deviated from the original track, accounting for more than 60% of the market.

However, this year, President Trump and Federal Reserve Chairman Powell went down to Nasdaq, NYSE, or slammed or optimistic. BTC will be in public opinion at least before production cuts (May 2020). Center, big fluctuations will be difficult to avoid.

Second, judge the bottom of the BTC from the weekly line

However, the focus of the currency currency is his BTC's technical trend model for the next 12 months. From the model point of view: BTC will form a circular arc shape from the bear market to the bottom to the new height. And confirmed the bottom of the weekly line is $ 7,000.

Friends who know the technical analysis know that if the general currency price is under the bottom, if the perfect U shape can be obtained, the price of the currency will rise in a parabolic form in most cases.

The analyst also pointed out that because the broken support in the downtrend will become the resistance in the future rise, BTC is now perfectly breaking through some of the previous resistance, but came to a (short-term) rising energy to temporarily end, short sellers Increased area.

Historically, the BTC has retreated to at least 61.8% of the Fibonacci retracement line. Usually, there will be a large number of people in this place and the price will rise again. In his opinion, BTC is still likely to fall back to 7,000 US dollars and then pull up.

However, considering the current financial environment and the long-term market, there are many uncertain factors. The currency currency thinks that there will be a bottoming out of the big probability before the BTC cuts production.

Investors can focus on: the bottom positions of $6,300, $7,000, and $9,000, and the high point. Currently, from the technical point of view, without extreme factors, BTC will have a high probability of hitting $30,000 before cutting production. The historical high.

Baibang Technology: The application of blockchain technology is the direction for the company to achieve further improvement in business management in the future

WIPO: A total of 1,060 pieces of intellectual property rights in blockchain approved in 2018