In recent years, there have been various content platforms under the encouragement of various certificates at home and abroad. Blockchain vertical communities, social platforms, and full content writing platforms have emerged in an endless stream. Many platforms have been degraded without glory.

The similarity between steem and eos is that they are all public chains and are public chains under the dpos consensus mechanism. They are composed of 20-21 master nodes and dozens of candidate nodes.

The difference between steem and eos is:

Third, eos has three resources: cpu, memory, and broadband, while steem has only bandwidth.

Steem's ecology is still very rich, as mentioned in TVB's previous article, in addition to the official content platform of steemit, there are some audio platforms, video platforms, programming platforms and so on.

What's more interesting is that the CEO ned and the former CTO BM did not count the opinions. After the BM was forced to leave, he built a busy platform on the steem public chain. The user sent a message on the busy, using the busy tag, every few One day I can get a compliment from busy. (Steem's pass model is that the creative income comes from the weight of the praise, and the weight of the praise comes from the number of locked steems of the liker.)

There are many products on steem, in addition to the official development of some tools and api, some witnesses have established the mssql database, because the underlying data of steem is nosql, mssql database can use our familiar SQL statement to query data, based on this On, witnesses have developed more query tools. For example, see who stepped on me, who stepped on me the most, who praised me the most, who praised everyone, and so on.

❖steem is not lost

Steem was once brilliant, and the market value ranking had reached the top 30. Steem dollor reached a price of $22 in 2017, and now the price of the steem dollar is $0.95, which is imaginable.

The same author, last year's article income is like this: 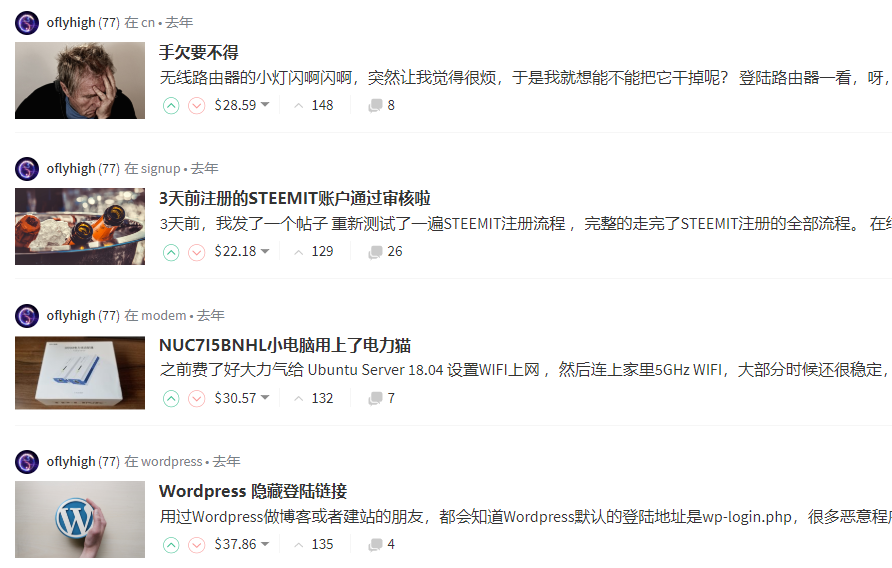 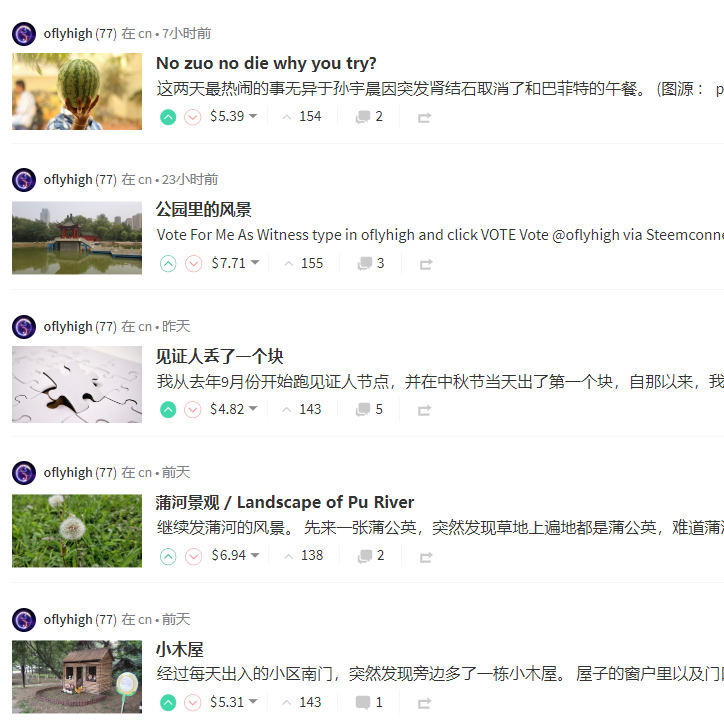 The CEO ned's homepage has not been updated for 4 months, and there are only a few coins left in his wallet: 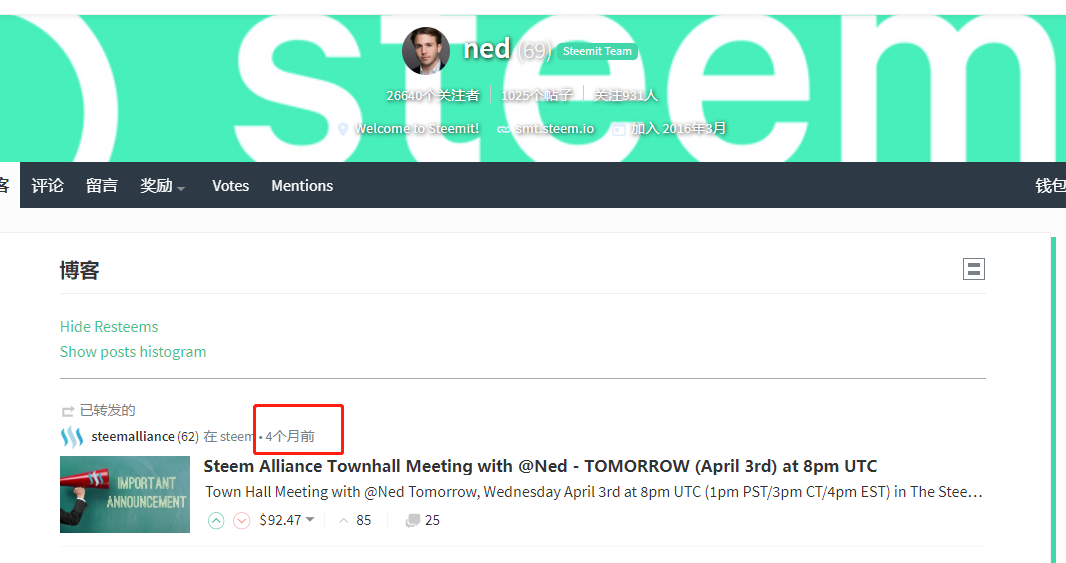 TVB thought that steem was as degraded as in his own eyes.

However, until recently, TVB learned from friends that steem is not as bleak as the surface. 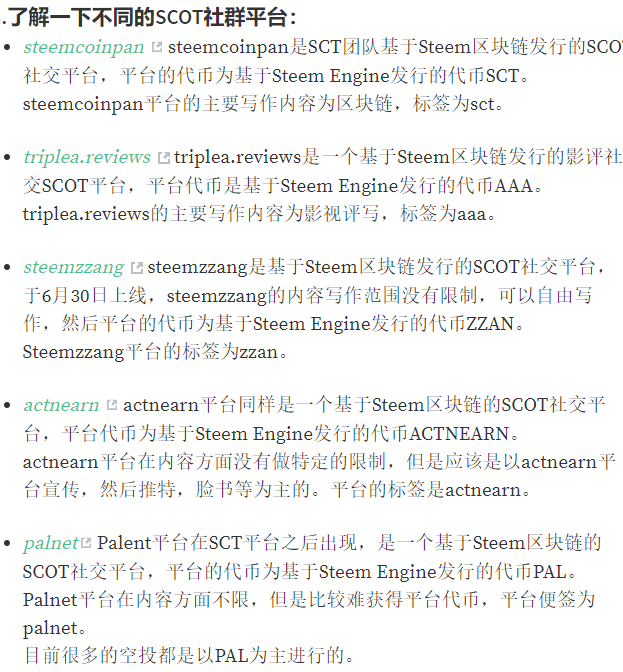 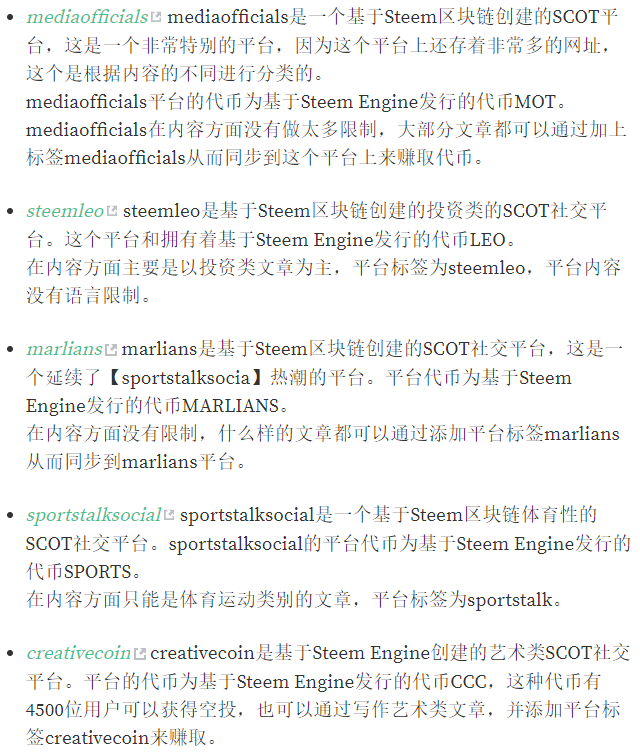 First, leaving the official centralization of steem, the vertical content platform on the steem platform is richer than before, with more and more subdivisions.

In addition, the steem community, there are people who have established a platform coin aggregation website, on which you can see the price of these platform coins on the steem.

Third, the author's income is not as small as the surface sees. TVB interviewed the author of the article from the screenshot source. Although his current article shows only $1, he said that with the coins earned on each platform, he can earn tens to hundreds of steems per day, currently each The price of steem is about $0.34, so he should be able to earn tens to hundreds of dollars a day, and this income is not bad. (A premise, this friend is not an early user of steem, nor has he caught up with the dividend period of steem Chinese area, and it is not a renminbi player)

Although the official of the centralization is no longer, the ecology of steem seems to be enriched, at least not yet.

In the end, I want to take back the words that I don't like optimo, because I found that the price of steem has not improved, but the ecology has become more colorful.

In the next round of bull market, steem may have more surprises.

Bitshares, steem and eos are the three brothers of dpos. From steem, TVB seems to see the future EOS. Under the dpos mechanism, nodes are a kind of mutual cooperation and competition, but when the public chain faces the crisis, these nodes will become united.

Humanity is a very interesting and very exciting thing, isn't it?