Bitcoin prices have continued to rise since March this year. The investors in the currency circle exclaimed: "The bull market is coming."

However, in this "bull market", the price of the altcoin has not risen, and many currencies have even fallen.

Today, the currency market has once again fallen back. More and more investors are starting to ridicule, they have experienced a "artificial bull market."

Others believe that bitcoin prices have reached a staged peak – $100,000 a bitcoin is a fantasy. In the future, the price of Bitcoin will continue to fluctuate for a long time.

In the stock market, many investors are no strangers to the term “artificial bull market”. It means that the fundamentals of the market have not improved, but the market index has suddenly risen due to reasons such as policies, news, and hot money speculation.

Due to the lack of fundamental support, the market will often collapse again after the “artificial bull market” has passed. Investors will also suffer heavy losses due to chasing up and down.

In the currency circle, the price of Bitcoin is comparable to the “market index” – its ups and downs will become an important basis for investors to judge the overall trend of the digital currency market. "In the last round of bull market, Bitcoin led the gains, other currencies followed suit, and even increased even more. But in this round of bull market, this law has expired." Chen Zhicheng said.

Unlike the previous round of bull market, only bitcoin and related mining industries have ushered in this round of upswings. Not only have other currencies not soared, but some currencies have even fallen.

Ethereum, one of the mainstream currencies recognized by investors, is a typical representative.

According to the same algorithm, the highest price of the two rounds of Bitcoin is only 34%.

In other words, compared with Ethereum, Bitcoin has returned more blood in this round of market.

"It is not difficult to see from the E-line chart of Ethereum that the current price of Ethereum is the same as that of November 2018. At that time, it was the coldest time for the entire digital currency market." Chen Zhicheng told a blockchain.

The IEO, once regarded as a "bull market fuse" by the currency investors, has gradually ebbed.

At the beginning of this year, IEO was very popular. On January 28th, BTT went online through the IEO mode on the Currency Exchange, and soon suffered a snap. In 13 minutes and 25 seconds, 23.76 billion BTTs were snapped up. Subsequently, exchanges such as Firecoin and OKEx opened the IEO channel.

However, almost all IEO projects are high and low, they have long been a game of drumming.

Take the TOP of the first IEO project of the fire coin as an example. On the fifth day after the launch, the TOP price began to go down. Today, the price of TOP is only $0.004516, which is 77.5% lower than the highest point.

The first IEO project CNNS launched by the Gate Exchange in April was directly on the next day, triggering investor rights protection.

"IEO has already ended in this round of market, investors have lost their original enthusiasm for IEO." Chen Zhicheng said.

In this wave of market, most of the price of the altcoin does not seem to follow the rise of bitcoin, and can even be described as "not moving."

"A lot of the altcoins that were born in the ICO wave are now dead." Investor Chen Kang said.

In August 2018, he invested in a digital currency called "GCS" on the BigONE exchange. Its current price has fallen by 99% from his purchase price, close to zero.

"What is even more desperate is that the GCS price has a 24-hour rise and fall of 0, which means that it has no trading volume, and it is already a stagnant water." Chen Kang said.

GCS is the epitome of many altcoins – in this round of the market, despite the rise in bitcoin, the altcoin is still sluggish.

Why is bitcoin soaring, why do the altcoins do not move? There are different opinions from all sides.

Xiao Lei, a financial analyst, believes that an important reason for the surge in bitcoin is that as an emerging asset, Bitcoin is increasingly being concerned by high net worth individuals.

“These high-net-worth people generally hand over investment to professional wealth management agencies.” Xiao Lei said to a blockchain, “Now, these institutions are also starting to recommend bitcoin to the rich.”

In other words, digital currency has become one of the asset allocation targets.

Wealth management agencies are scrambling to enter this market. "I don't push it myself, other organizations will push it, and every organization does not want to cause customer loss." Xiao Lei said.

In May of this year, digital currency analyst Rhythm issued a special statement, "Grayscale Investments bought more than 11,000 BTCs in April 2019, accounting for about 21% of BTC's global monthly supply. Institutional investors Being in a state of FOMO (fear of missing)." 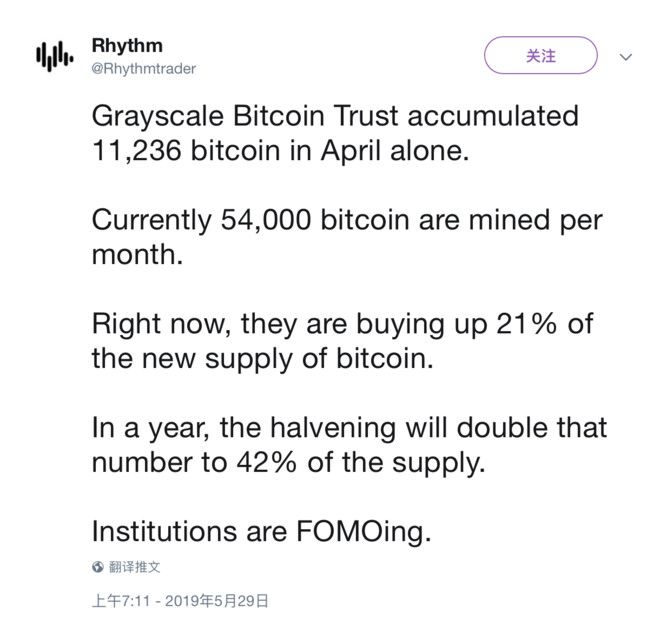 Grayscale is one of the well-known digital currency asset management companies in the United States. They have been pushing a campaign called “Giving Gold” to try to convince more people to invest in the digital assets they manage.

The Fed’s release of interest rate cuts is also one of the underlying reasons for the rise in bitcoin.

At the beginning of this year, after the Fed’s first meeting on interest rates in 2019, the Fed announced that it would not raise interest rates.

In the statement document of the meeting, the Fed also deleted the two important words of “further interest rate hike” and “the general balance of risks facing the economic outlook”. Most market participants expect that the Fed’s current rate hike cycle is nearing completion.

Recently, the Fed is holding the fifth meeting of interest rates during the year. The results of the meeting will be announced in the early hours of Beijing tomorrow morning. Global investors and economists generally expect the Fed to announce its first rate cut plan for more than a decade.

The direct result of the Fed’s interest rate cut is that the dollar is lower. This will also make the market once again favor safe-haven assets such as gold, crude oil and digital currency.

In June of this year, the price of gold broke through the $1400 mark per ounce, setting the highest closing price since 2013.

Investors who buy digital currency as a safe-haven asset are mostly averse to risk. The investment target they choose is only the highest and most recognized bitcoin in the currency market.

"The ICO bubble has burst and investors can't see the value of the altcoin." Chen Kang said.

As bitcoin continued to rise, investors began to sell their altcoins and buy bitcoin. The blood-sucking effect of Bitcoin is becoming increasingly apparent.

CoinMarketCap data shows that as of July 31, 2019, the global market value of digital currency was $29.34 billion, of which the market value of bitcoin accounted for 64.6%.

“Does Bitcoin continue to rise above $100,000? I don’t think so.” Yin Haotian, a financial columnist, told a blockchain.

In his view, bitcoin prices will also fluctuate for a long time around $10,000. In a period of time, it is difficult for Bitcoin to have a doubling price increase.

The biggest reason for restricting the further rise of Bitcoin is its limited value.

“The biggest value of Bitcoin now is to act as a value storage tool. Compared with physical assets such as crude oil, the use value of Bitcoin is almost negligible.” Yin Haotian said, “Bitcoin is proud of its anonymous trading and asset transfer functions. It does not make much sense for legal capital."

"As a technology company serving global users, Apple stocks anchor a large number of physical assets behind. Investors can get dividends when they buy Apple stocks. The bitcoin is that the assets themselves will not generate revenue." Yin Haotian said.

Therefore, he believes that Apple's market value is surpassed by Bitcoin, which is not possible. What's more, most Bitcoin positions are very concentrated today.

In addition, the high market value of Bitcoin has also become a hindrance to the “banker pull”.

Therefore, he believes that the price of bitcoin is more than 100,000 US dollars, but it is just a wishful thinking of some people.

"If Bitcoin is used as a gaming chip, the only profit model for investors is to buy low and sell high." He said that since it is a chip game, there are pull and wash. For example, since the second half of last year, bitcoin prices have fluctuated and many investors have left the market at the stage of $3,000.

In his opinion, this is a dishwashing of Bitcoin. After that, Bitcoin will go through a long period of washing. "The players who don't buy 10,000 US dollars into Bitcoin will be washed off, and the dealer will not pull the plate," Yin Haotian said.

In fact, the cost of mining is one of the few “anchor foundations” for bitcoin prices. From the perspective of production costs, the current cost of excavating a bitcoin for a 7nm mining machine is only about $2,000, which is much lower than the secondary market price of Bitcoin.

"If one day, the price of bitcoin reaches 100,000 US dollars, that means the cost of mining is growing faster than the development speed of the chip industry." Wu Di said, "and Moore's Law will come to an end."

This "artificial bull market" may be nearing completion.