In addition to layoffs, Jingdong is still secretly doing this.

For Jingdong, which is eager to explore the transformation of science and technology, the blockchain must be unwilling to miss the battleground. The blockchain of Jingdong is not to be underestimated.

Jingdong is catching up with BAT.

On April 9th, Jingdong handed over Jingdong's transcripts in the blockchain field with the White Paper on Blockchain Technology Practice in Jingdong District (2019).

In addition, at the end of March, among the 197 filing services disclosed by the Internet Information Office, JD.com was filed with four blockchain services, leading the BATJ and becoming the Internet giant with the most blockchain information.

Well-known Jingdong may be an e-commerce platform with fast speed, high efficiency and high quality. As everyone knows, the old e-commerce company Jingdong is also seeking technological transformation.

Liu Qiangdong, the head of Jingdong, mentioned his ambitions in the field of science and technology more than once in public.

At the 2017 Jingdong Annual Meeting, Liu Qiangdong announced the Jingdong strategy for the next 12 years. Jingdong should comprehensively transform its technology to build a world-leading smart business.

After Liu Qiangdong announced the planning of Jingdong's next 12 years, the change of Jingdong Finance's name change in 2018 triggered the industry's speculation on Jingdong's future.

In November 2018, Jingdong Finance officially announced its name change to Jingdong Digital Technology (hereinafter referred to as “Jingdong Digital Science”). Prior to the change of name, Jingdong Finance has been operating independently for 5 years, and is positioned as a technology company serving financial institutions. The main businesses are consumer finance (Jingdong Baizhi and other consumer lending businesses), supply chain finance (for corporate lending) and payment services (JD). Wallet, etc.) Three sections. But in fact, Jingdong Finance's performance after the VIE split has been unsatisfactory.

According to media reports, in the third quarter of FY18, the financial report showed that the total cost of technology research and development of Jingdong Group in the first three quarters of 2018 was 8.64 billion yuan, exceeding the level of 6.65 billion yuan in 2017.

At the beginning of 2019, in the internal activities of Jingdong Digital, Chen Shengqiang, CEO of Jingdong Digital, handed over the “Jingdong Mathematics” transcript, indicating that the company had achieved full-year profit in 2018, of which the revenue from technology services accounted for 3 Times.

Technology is the core of Jingdong’s 12-year strategy. Some media analysts said that the technology that Liu Qiangdong hopes includes a blockchain. According to the report, in the eyes of Liu Qiangdong , the blockchain, like cloud computing, big data, and artificial intelligence, is the technical reserve that Jingdong has made to meet the fourth retail revolution and build a “retail infrastructure” .

In August of 2018, Liu Qiangdong once again shouted for the blockchain, saying that he would rebuild the entire retail industry with various "black technologies" such as blockchain . Liu Qiangdong revealed at the time that Jingdong was actively promoting blockchain technology and strengthening the traceability of goods.

At the end of March, among the 197 filing services disclosed by the Netcom Office, Jingdong filed the Jingdong Blockchain Anti-counterfeiting and traceability common platform, Jingdong Blockchain BaaS, BDS (Jingdong Cloud Blockchain Data Service), and chained 4 services. project. Jingdong is the most-registered Internet giant and has become the vanguard in the BATJ queue.

For Jingdong, which is eager to explore the transformation of science and technology, the blockchain must be unwilling to miss the battleground. The blockchain of Jingdong is not to be underestimated.

Tracing back to the main battlefield

Jingdong’s earliest test of the blockchain began with finance.

In June 2016, JD.com joined the Financial Blockchain Cooperation Alliance (Shenzhen), focusing on the application of blockchain in the financial sector. In the same period, it joined Tencent in the financial blockchain cooperation alliance, as well as Tencent. Ali entered the market in July 2016, and Ant Financial applied the blockchain technology to the Alipay Love Donation Platform.

Jingdong began to lay out the financial blockchain business in 2017 and established the Jingdong Financial Blockchain Laboratory in March 2017. In the financial field, JD.com has indeed made a lot of experiments, and the main business results are in the construction of ABS and the alliance chain.

For the giants, if you want to share a piece of the free-growing blockchain market, you need to find out the part of your business that can accurately combine the blockchain.

In June 2017, Jingdong Group turned to explore the application of blockchain in the field of traceability.

Traceability has gradually become the main battlefield of the blockchain in Jingdong District.

The products in the anti-counterfeiting and traceability platform cover food, alcohol, milk powder, daily necessities and medical supplies. There are over 700 branded products and over 50,000 SKUs. The brands that are located include Nestlé, Wyeth and Yanghe.

In the online e-commerce section, Jingdong is on the WeChat line of "Chih-Hsien Life" applet. All cross-border goods in this small program are traced back by the blockchain. JD. integrates information on the raw material process, production process, distribution process, and marketing process into the blockchain. Consumers can trace the information from production, transportation to sales by scanning the QR code on the product.

JD Global Global has therefore become the first cross-border e-commerce platform to use blockchain technology traceability in the entire chain.

In the offline consumption scene, Jingdong has not fallen. In the online retail project 7 fresh, Jingdong has created a 7 fresh offline tracking system, which uses blockchain to record its fresh product information for traceability.

Jingdong invested in the “magic mirror” system in the fruit area of ​​the 7 FRESH store. Consumers automatically scan the QR code on the fruit through the "magic mirror" and immediately know the various places of fruit production.

Of course, the application of the blockchain in traceability is often criticized by practitioners as a pseudo-demand. The blockchain approach only provides a non-tamperable record channel for information, and it is difficult for the blockchain to solve the producer's fraud problem from the source.

To this end, on the basis of traceability, JD.com also launched the Thousand Eyes Food Traceability Service, which broadcasts real-time monitoring of the production environment to supplement the “source fraud” defects that cannot be solved by the blockchain.

In addition, Jingdong's blockchain traceability business tentacles have also extended from the consumption scene to the fields of medical traceability and rental information.

According to the latest white paper published by Jingdong, Jingdong is currently working on To B's business. JD's blockchain architecture system includes two sectors, the public chain and BaaS.

In fact, whether it is Tencent, Ali or Baidu, Jingdong, the giants are an aircraft carrier in the Internet world. Once they go wrong, it is difficult to turn back. Therefore, in the face of new things, the exploration of the giants is more willing to cooperate with supervision. Innovative exploration based on the rules.

The BaaS platform for B-end players meets this requirement. The full name of BaaS is Blockchain as a Service. It is translated as “blockchain as a service”. 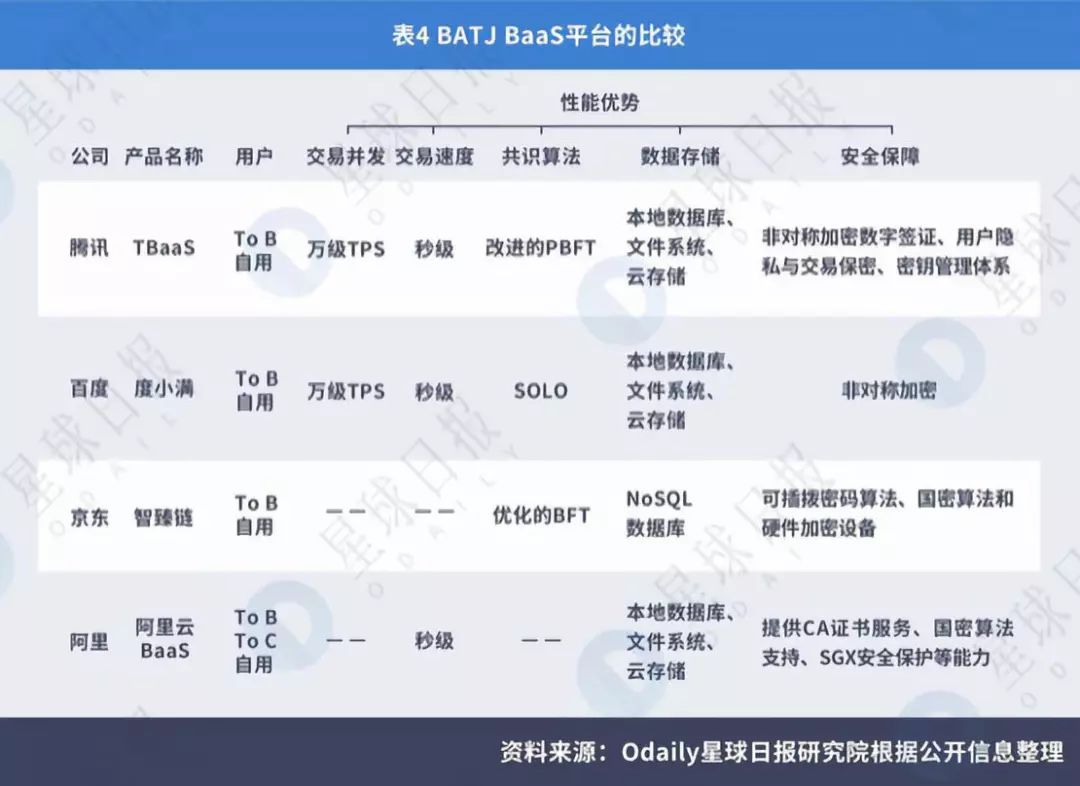 How much is BaaS in a big company? In this 197 filing projects, a total of 9 BaaS projects were listed. In addition to BATJ, the listed company Huada Gene also deployed its own BaaS platform. Of course, it is not just domestic BATJ that is currently doing BaaS. IBM, Microsoft, Amazon and other international giants have also launched similar blockchain underlying technical services.

The BaaS platform has become the underlying business that the giants compete for.

If we say that the giants have entered the BaaS section of the blockchain in order to split up the blockchain cake without “coining the currency”, what benefits will To B's underlying technical services business bring to the giants? Is BaaS really as sexy as I imagined?

Some people have concluded that the big companies doing BaaS are actually the game of the alliance chain. In addition to the benefits of selling BaaS services, the giants can also establish their own alliances and establish their influence in the blockchain world.

In this regard, some insiders analyzed the Odaily Planet Daily and said that it is a natural choice for the giants to build their own BaaS platform. On the one hand, because the node deployment of the alliance chain is more complicated, the BaaS platform can simplify the node deployment process and lower the technical threshold. On the other hand, many alliance chains exist in the form of private chains, and nodes are deployed inside large organizations, considering the network. Delay, all nodes deployed in the same room is the highest performance.

Hong Yining, who was once the head of Suning Financial Blockchain, commented: "The Internet giants do BaaS, and there are commercial interests in the short term, but they are using Internet thinking to make blockchains, so they are still private chains, blockchains. The future will not have room for giants to exist. "

There are still many similar views. When Facebook planned to issue a coin event earlier, there was a lot of discussion about whether the giants could eat into the blockchain market. The biggest criticism of blockchain practitioners for the giants is that Internet companies are too central.

It is widely believed that if the giants do not choose to decentralize, it is difficult for the blockchain to release its true potential. For the giants, the biggest difficulty in the exploration of blockchain is likely to be how to subvert and promote decentralization.

Looking back at the history of the development of the Internet in the past, BATJ succeeded in breaking through in a number of Internet companies. In addition to technological advances, it was indispensable to choose the right field and innovate it.

" The reason why today's Internet giants can become giants is because they are innovators and pioneers in their respective fields, not the Internet + traditional industries. " Hong Weining believes that technology is serving the business. In contrast, innovation is more important.

In fact, the traffic that the Internet giants are holding is exactly what is needed in the marginal blockchain industry. However, some practitioners are still optimistic about the future of the blockchain world. Some people believe that the blockchain will have a new business model and will not rely on traffic.

" Think about how many traditional enterprises have transformed the Internet in the past. How many successful ones? After the arrival of the new era, it is inevitable to use existing thinking methods and business models to operate, but this is also the fate of the giants. In the 'path dependence', people's way of thinking is difficult to change, especially for successful people. " A blockchain senior practitioners commented.

In May, the number of Dapps with 0 EOS/ETH/TRON transactions increased by 83.56%.

Atlas of the first phase of the Coinsuper CS Hub was launched, and the ONT channel was completely robbed in 72 seconds!

Report: ETF's chain transaction amount decreased by 40% within one year 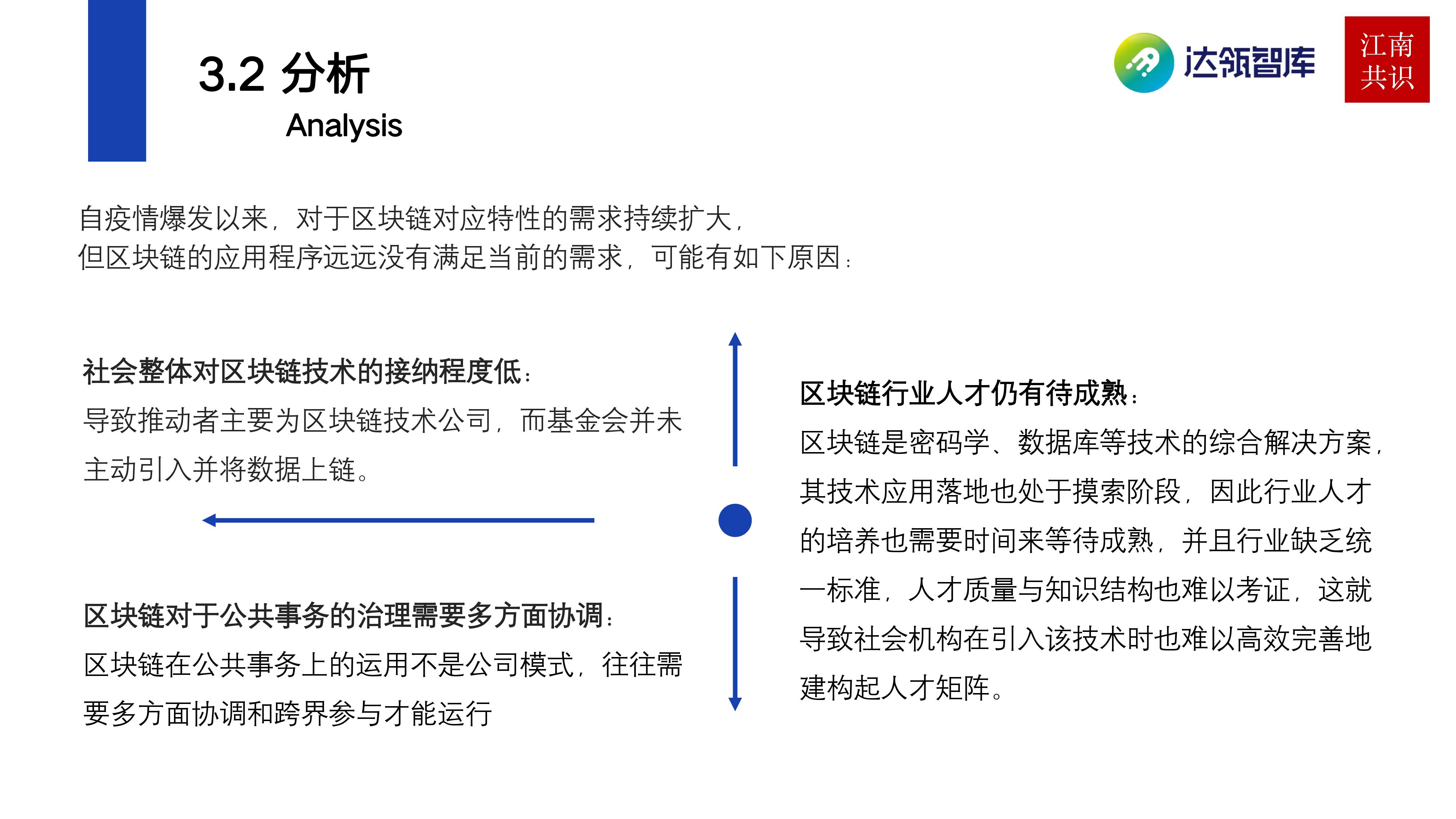 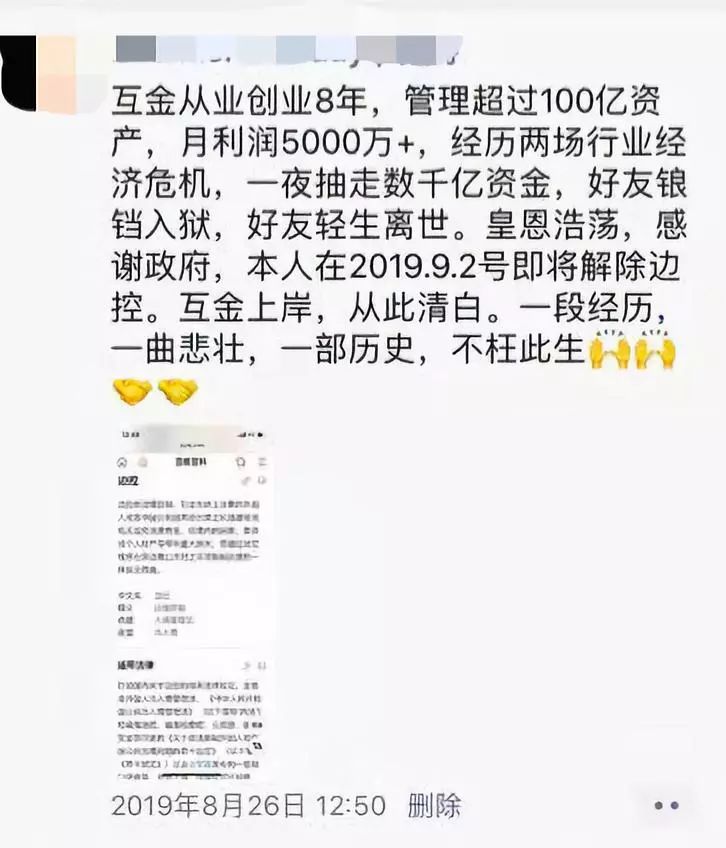 Ethereum 2.0 will set sail, are you willing to take the 32ETH boarding ship to PoS New World?