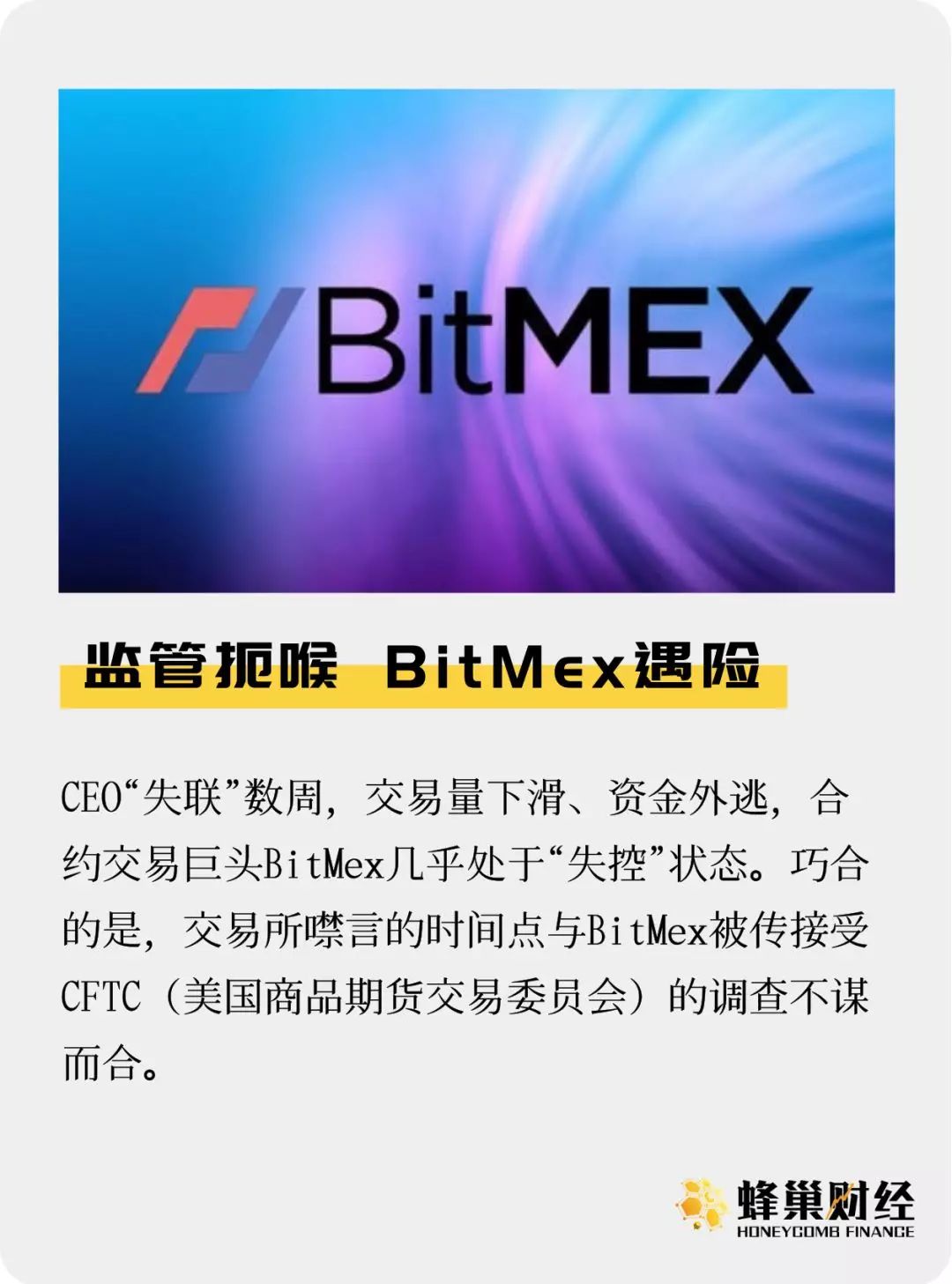 On August 1, Arthur Hayes, the BitMEX CEO who was suspected to have lost contact for several weeks due to the CFTC investigation, suddenly "appeared." On the personal tweet, a self-portrait in the jungle was released, and the article was called "See you in September."

Hayes's tweet did not mention any information about BitMex being investigated. Many netizens have speculated that if he has anything to say, he will choose to go to the mountains.

In fact, since July 19th, foreign media Bloomberg has repeatedly reported that BitMex has accepted the CFTC (Commodity Futures Trading Commission) investigation. The core of the investigation is whether BitMex illegally provides trading services to US users and large-scale money laundering.

The article pointed out that BitMex has been inspected for several months.

On July 28, the event was further fermented. According to another foreign media, Bitcoinist, the trading volume of BitMex dropped sharply, and the cold wallet showed a lot of money-raising behavior. It was suspected that platform executives were running.

Before the distress, BitMex has been cautious about the US market. The person in charge of the platform once pointed out that since 2015, BitMex has banned trading services for US users.

But this does not seem to dispel the doubts of supervision. From the point of view of BitMex's official website, the United States has long occupied the top 5 position of the website traffic list. Some insiders believe that it may not be easy for BitMex to get out of regulation.

BitMex has no compliance qualification

The BitMex distress was not unrelated to its long-standing lack of compliance.

Since the beginning of this year, the United States has responded to the cryptocurrency of Facebook's currency, Tether and other cryptocurrencies one after another. The government's supervision on the digital assets field has gradually become clear.

In this situation, major exchanges have responded to US regulation, and Coin Ann issued a statement a month ago saying that "no service is provided to any American." In addition, the American veteran exchanges Bittrex and Poloniex successively launched a number of Tokens in March and May this year. The reasons for the removal were officially stated to be in response to possible compliance risks, or they will continue to be delineted.

From this point of view, in recent months, the US government's regulatory authorities have not called for a “reorganization” slogan, but have adopted comprehensive measures and penalties. They do not intend to leave any room for negotiation on these “disobedient” trading platforms. .

Responsibilities of the three major US financial regulators

FinCEN (Financial Crime Enforcement Agency) is a US Treasury Department that issued Application of FinCEN's Regualations to Persons Administering, Exchanging, or Using Virtual Currencies on March 18, 2013, which requires figures from the federal government. Companies in the money service business must complete the “Money Services Business” (MSB) registration and perform the corresponding compliance duties. The primary responsibility of a registered business is to establish an anti-money laundering process and reporting system.

It is worth mentioning that BitMex is not on the FinCEN MSB registration list.

BitMex, which is based in Hong Kong, has not obtained a license. However, BitMex's contract products for users in the US market are only a small number of BTC, ETH and other trading products. Currently, it has not been strictly defined as “having securities attributes”. BitMex is not currently focused on the SEC. Within the jurisdiction.

The CFTC (Commodity Futures Trading Commission) was originally responsible for the issuance and supervision of licenses in traditional futures and other derivatives markets. However, since February 19 this year, the SEC and CFTC jointly issued a voice, indicating that they will consider cooperating to regulate the cryptocurrency market, of which CFTC will focus on supervision. A trading platform with futures trading attributes.

In the US Act, BTC is defined as a commodity, and commodity futures are vested in the jurisdiction of the CFTC. In addition, on April 2 this year, US Congressmen Darren Soto and Ted Budd submitted two legislative supplements to avoid the manipulation of virtual currency prices and asked the US Commodity Futures Trading Commission (CFCT) to take corrective measures to prevent virtual currency. Field price manipulation suggests.

Since then, CFCT has added a new regulatory function, namely price manipulation and fraudulent behavior of digital assets in the US market. BitMex provides large-scale contract trading services to US users, and the maximum leverage is 100 times. The platform does not obtain any license for commodity futures trading and clearing services. Therefore, this CFTC survey is naturally reasonable.

The flight of funds led to a decline in trading volume

The result of a survey by US regulators is that the volume of transactions has fallen and funds have fled. Since Bloomberg released the news that BitMex was investigated by CFTC on July 19th, the number of users and user traffic of BitMex's official website continued to fall. Among them, the number of user visits decreased by 11.57% compared with the previous month. 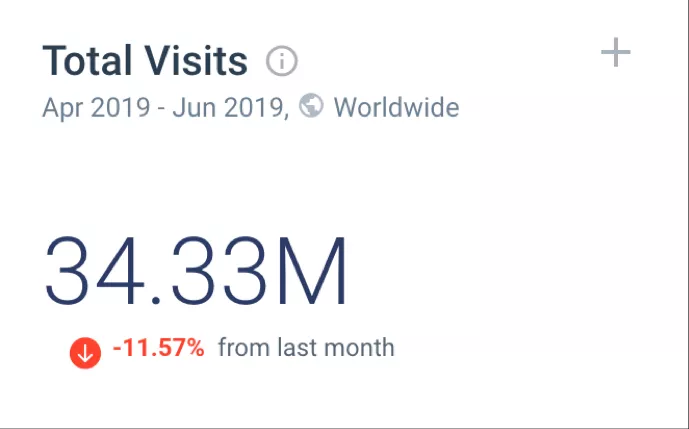 The decline in user traffic has directly caused BitMex trading volume to decline for nearly two weeks. Since July 10, BitMex's trading volume has dropped from $7 billion to more than $2 billion.

At the same time, a large amount of funds are also outflowing. The 24-hour BTC inflow/out data of the major exchanges of the data analysis agency TokenAnalyst shows that since July, the exchange's bitcoin outflow is more than the inflow. On July 31, BitMex's bitcoin inflow was $1,100,000, while the outflow was $3.99 million. 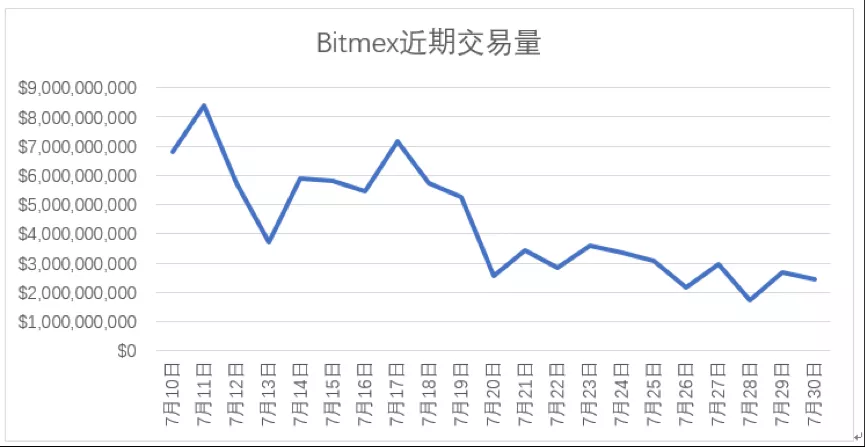 BitMex trading volume has been declining since July

Users fleeing, assets are lost, and trading volume is shrinking. All of these factors may be related to the lack of market growth since entering July.

But what is even more terrifying is that during this period, BitMexCEO is also in a "disconnected" state, and personal tweets have not been updated for nearly 3 weeks. At the same time that the CEO lost contact, the BitMex social account disappeared almost at the same time, and BitMex's Twitter account also stopped updating on July 15.

On August 1, Arthur Hayes, who had disappeared for weeks, suddenly "appeared." On the personal tweet, a self-portrait in the jungle was released, and the article said "See you in September." Hayes's tweet did not mention any information about BitMex being investigated. Many netizens have speculated that if he has anything to say, he will choose to go to the mountains.

It is difficult for the exchange to settle in the United States.

Before the distress, the person in charge of the BitMex platform once pointed out that since 2015, BitMex has banned the provision of trading services for US users. But this does not seem to dispel the doubts of supervision. From the point of view of BitMex's official website, the United States has long occupied the top 5 position of the website traffic list.

Increased supervision means that in the future, if trading services are to be provided in the US market, the exchanges must obtain relevant qualifications and licenses.

The so-called qualifications and licenses are the registration licenses of FinCEN "Money Services Business" (MSB), and obtain the MTL "Monetary Transmitter License" (MTL).

In fact, the registration fee for FinCEN's MSB is not high. The main responsibility of the company that completes the registration permit is to establish an anti-money laundering procedure and reporting system to facilitate FinCEN to track funds, thereby strengthening the control of money laundering, terrorist financing and other crimes.

In addition, if you provide trading services in the State of New York, you will need to apply for a special license, BitLicense, from the New York State Department of Financial Services (NYSDFS).

Since the SEC determines a large number of ICO tokens as assets with securities attributes, any transaction service that provides ICO tokens is equivalent to providing securities trading services, so such trading platforms need to obtain stock exchange licenses.

At present, it seems that the difficulty of obtaining a securities trading license in the United States is still very large, and it is basically impossible for most exchanges to complete tasks in the short term. Therefore, a number of US trading platforms represented by Coinbase are extremely cautious in terms of the currency. They are far away from the ICO tokens that are riskyly determined by the SEC as securities. Only a small amount of relatively small risk trading services such as BTC and ETH are provided. .

For contract trading platforms with futures attributes, you need to apply to the CFTC for a derivative transaction related license.

Among them, the designated contract market license DCM and the derivative clearing organization license DCO are two essential basic licenses. After obtaining this license, the trading platform is eligible to provide BTC contract trading services to US users. However, if a contract transaction involving an ICO token of a security attribute is required, the SEC approval is still required.

Recently, the Bakkt trading platform of ICE, which is a high-profile entry into the digital asset industry, has already submitted an application for license to the CFTC, but it has not yet been approved.

In general, it is very difficult to complete the compliance construction with the trading platform of the United States as the main market. Before the currency security escaped from the US market, it would be a helpless move.

Regardless of the currency, or BitMex, the previous period spent a lot of energy on the development of the US market. Therefore, with the tightening of supervision, it is inevitable that the damage caused by the broken arm will be inevitable.

Survey: Most crypto business executives expect BTC to be used as value store in coming years

The data shows that the relationship between Ethereum and BTC continues to decline, and there is a certain rebound in the exchange rate of BTC. 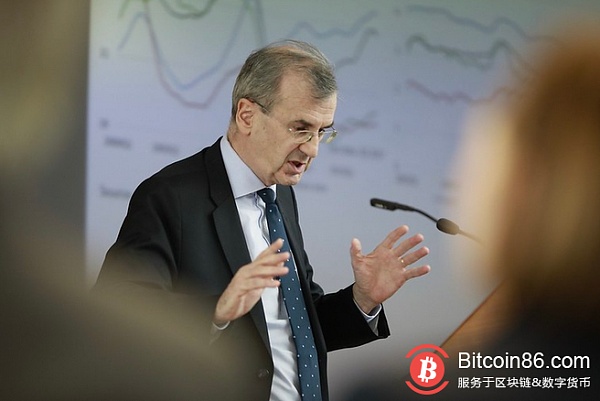