In the early morning, the BTC trend formed a large-scale correction. When it went up to 10676, the volume began to flow out sharply. The pressure on the empty side intensified and the trend further reversed. The current minimum has fallen to near the 10350 line, breaking the hour Bollinger Band. In the middle track, it enters the middle and lower rail area. However, the current hourly STOCH forms a golden cross on the 20 horizontal line, and the trend has a posture of entering the rebound stage. Once it breaks above 10,500, the rebound trend will further form an attack to the high point again; ETH continued to fluctuate for nearly a month, and now it is running around the middle of the Bollinger Band. The MACD indicator continues to run upwards, the SOTCH indicators intersect and the Bollinger Band is in a closed position, and the volatility trend will continue. Continue to shrink, RSI is running near the 50 horizontal line, there is a flat posture, and the long and short battle will be further expanded into white heat, then it can stand firm in the region and break through the upswing 220 line, the upward trend is formed; the operation suggestion is low and low. Support 210, resistance 230; XRP still failed to stand firm in the middle and upper rail zone of Bollinger Bands, and the trend entered a downward trend. The STOCH indicator was down near the 20 horizontal line, the downtrend continued, and the RSI remained parallel. The follow-up will be a downward trend. Resistance 0.32, support 0.30; LTC is also affected by the pancakes and enters the trend of the callback. The upward touch of 100 is still not broken. The author has repeatedly mentioned that the profit is put to 100. Currently, the short-term gain of 5 to 10% in LTC is enough. The current trend also broke the middle of the Bollinger Band. If you return to the lower limit of the target again, you will see the 80-85 support bottom follow-up; BCH's upside posture continued to maintain, and yesterday successfully broke through the resistance of 330. Currently adjusted around the 5-day moving average, retaining the upside posture, then after the trend stabilizes above 320, it will maintain the offensive against the upper high, RSI indicator There is a flat posture, the Bollinger band is parallel, and the BCH will keep running in a oscillating trend, supporting 310; EOS also failed to stabilize to the upper part of the Bollinger Band. Currently running in the middle and lower rail areas, the 5-day moving average and the 10-day moving average will form a dead fork, so the short-term trend cannot return to the 4.3 direction, then the downtrend will continue to remain. The adjustment will continue, the operation proposal is mainly empty, and the short list is followed by 4.3; 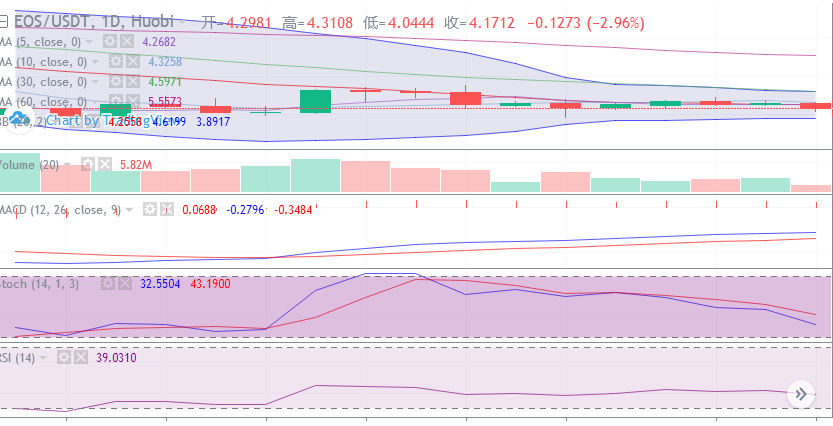 The callback of BTC has made the differentiation of mainstream currencies intensify and evolved. Some currencies still exist in the down channel, and the callback still has great possibility. In this situation, the market still needs to be adjusted, and the shock adjustment period will be pulled. Long, so at present, it will give some better admission opportunities. If there is no patient friend to follow up in the area suggested by the author, short-term friends still need to do risk control, grasp the income in time, and profit as soon as possible to leave. Keep safe and effective operating habits; friends who can't grasp the opportunity to take the anti-single in the near future can pay attention to Chen Chuchu's timely change of strategy and follow up the profit-making ideas;