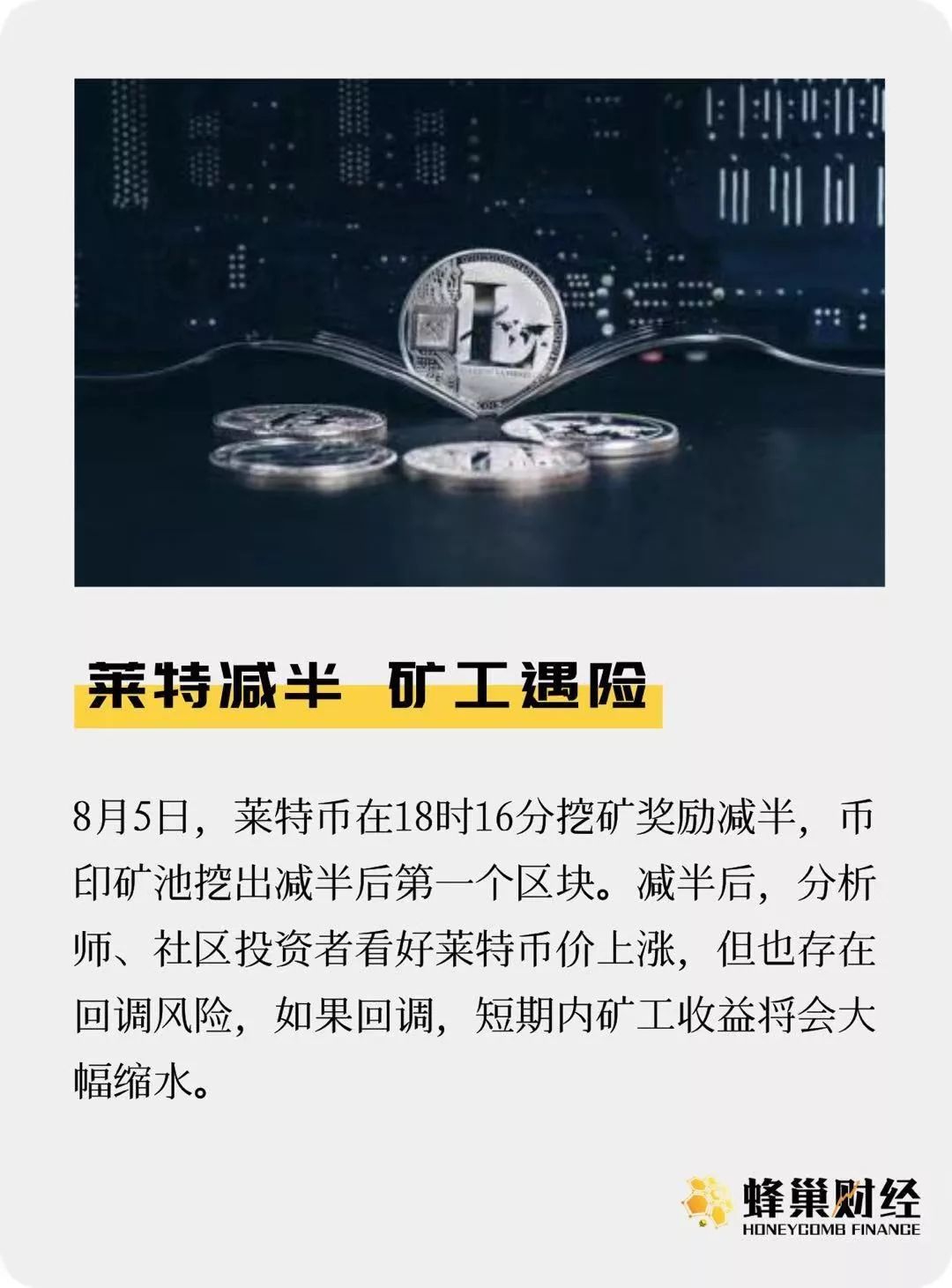 At 6:16 pm on August 5th, Beijing time, Litecoin will halve the mining reward at a height of 84,000. The block reward will be reduced from 25 Litecoins to 12.5. Affected by the halving of production, as of the halving, the Litecoin rose by 12.4% in 24 hours, temporarily reporting $102, and the currency price broke through $100 for the fifth time this year.

As early as six months ago, the reduction in Litecoin’s production was seen as the turning point in the price of the currency. In December last year, the Litecoin began to bottom out, rising to $145 on June 22 this year, seven times the price at the end of last year.

Jiang Yanlong, CEO of venture capital lab Tlab and senior analyst of cryptocurrency, believes that although the benefits of the Litecoin halving have been exhausted, there is not much room for further callbacks.

"The next halving of Bitcoin will also drive the Lite currency to continue to rise."

The secondary market continues to be bullish, while the interests of Litecoin miners may be damaged in the short term. The head of the mining club, Yu, told the Honeycomb Finance that after half-half, the overall income of the miners was reduced by half, and the overall profit became 10% to 30%.

"If the price of the currency does not rise, Wright's mining revenue will become very pessimistic."

LTC production cuts 24 hours, 12.4%
The long-awaited “half of the Litecoin” has finally arrived. On August 1, Li Kewei, the founder of Litecoin, posted a notice on Twitter that the Litecoin production was reduced four days later.
At 6:16 pm on August 5, Litecoin began to halve at a height of 840,000 blocks, and the LTC mining award was reduced from 25 to 12.5. This is the second halving since the birth of Litecoin, the last time was on August 28, 2015.
Affected by the halving of production, as of the halving, the Litecoin rose by 12.4% in 24 hours, temporarily reporting $102.
Eight years ago, Google’s engineer Li Qiwei was created by Litecoin to create Litecoin. In principle, the production mechanism of Litecoin is the same as that of Bitcoin, which was also called the altcoin of Bitcoin. Compared with Bitcoin, Litecoin has a shorter time, with an average of 2.5 minutes and a total amount of 84 million. 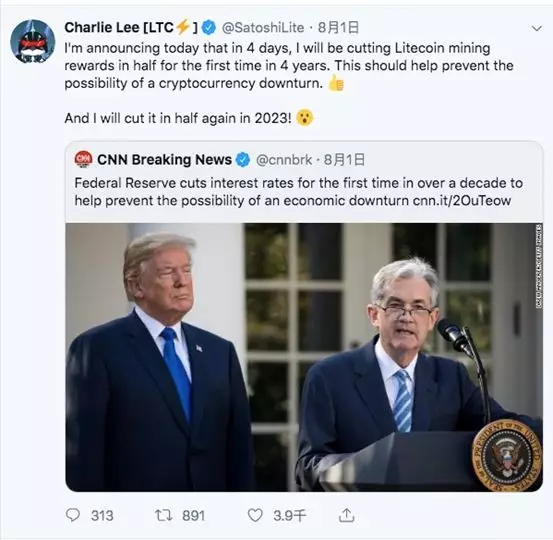 On August 1st, Li Qiwei’s Twitter notice halved the Litecoin
Due to the short time of the block, the Litecoin at the beginning of the birth was expected to be paid, and later ranked among the top in the cryptocurrency market value list. In the following 7 years, it was classified as "mainstream currency" together with Bitcoin and Ethereum. ".
The reduction in the production of Litecoin has also been highly anticipated. In theory, the production of Litecoin is halved, the market is scarce, and the price of coins will rise. Investors even regard the reduction of Litecoin as a small turning point in the overall market.
At the beginning of this year, when Bitcoin was still at the bottom of 3,000 US dollars, the founder of the public chain said desperately. "It is difficult to make a good change in the first half of this year. See if the halving of the Litecoin in the second half of the year can bring some funds. Go to other currencies."
As a result, Bitcoin rose frantically from April, breaking through $14,000 on June 26, leading the mainstream currency. Litecoin also launched a wave of gains in the market expectation of production cuts.
On December 15 last year, the Litecoin began to bottom out. On June 22, the price of Litecoin rose to a peak of $145, a seven-fold increase in half a year compared to the low of $20.6 at the end of last year.
Multiple analysts continue to be bullish
As of 8 pm on August 5, AI Coin showed that the price of Litecoin was $100.8. At the time of the halving, the price was slightly adjusted.
In a group that focuses on the reduction of Litecoin, some investors are pessimistic:

"The good fortune is bad, and the second half is not good."

Compared to a few pessimistic investors, cryptocurrency analysts believe that there is still “upside space”. TLAB CEO Jiang Xiaolong said that the space for the price recovery of Litecoin has been very limited:

"Bitcoin's production cuts may also bring in the market in advance, driving the Litecoin to continue to rise. LTC may exceed the previous high of $145 by the end of the year."

He believes that the core logic of price volatility brought about by the production cuts is two points. First, market expectations, the market will default the price of the currency will increase before the production cut, short-term retracement after the production cut, followed by bitcoin production cuts The second is the game between “digging coins” and “coin currency”, that is, the funds entering the market choose mining, or buying in the secondary market. After the production is reduced, the miners will be reduced, and some funds will flow to the secondary market.
Analyst Justin Zhao believes that the overall value of Litecoin is currently undervalued. He analyzed that at the current K-line, it is a weekly-level adjustment and is expected to oscillate between 80-100: 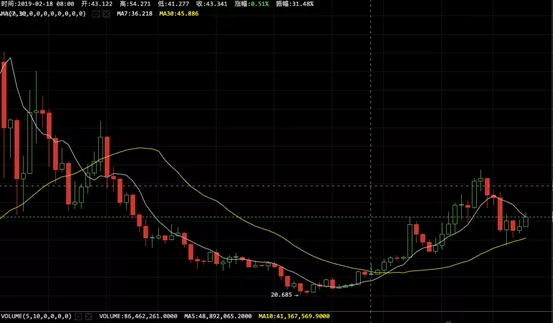 Litecoon Week K line has begun to rebound
After the halving of the last time, Litecoin rose from 9 dollars in the halving to a high of 369 dollars, a 41-fold increase. There will be a continuous increase after halving.
Wang Xinxi, co-founder of the Litecoin Foundation, said in a community sharing that the previous halving market is only the expected market, and the market is expected to officially end on the halving date. The real good will continue to be released from the halving date. Form a round of bull market:

However, from the historical price law of Bitcoin and Litecoin, which were halved in the last time, the price of the currency will have a correction after the block reward is reduced. The Litecoin has also experienced a return of $2.7 from $9 after halving, a 70% drop in just 45 days.
For investors, the short-term callback risk still exists.
Miners’ interests are damaged in the short term

Compared with the optimistic expectations of the secondary market, Litecoin's production cuts will cause "internal injuries" to miners in the short term.

"After halving, the overall income of the miners should be reduced by half, and the overall profit will become 10% to 30%." If the price of the coins does not rise, the profit of the Wright mining will become very pessimistic. "Captain Yu, the head of the mining club, said.
At present, the Wright coin mining machine is mainly ants L3+ and L3++. The power consumption of L3+ is 800 watts, and the power consumption is about 19.2 degrees per day. The revenue is only about 0.008 LTC, which is equivalent to about 5.7 yuan. If the electricity fee is calculated by an average of 0.26 yuan, Photoelectric expenses account for more than 87% of revenue.
After halving the output, the Litecoin rewards dug up will basically cover the cost of electricity. COO Zhu Xi of the coin-printing pool even believes that L3+ will face a situation of “selling for money” due to the decline in energy efficiency.

BTC.Com shows that the ant mining machine L3++ daily mining revenue is about 11.9 yuan
As a source of output for the currency, what happens to the miners next?
Wang Xiaoyi, founder of the Beijing Institute of Mines, told the Honeycomb Finance that the impact of the reduction of Litecoin on the miners was almost unsolvable. He explained that Litecoin began to pay at the beginning, and later BCH, USDT and other competition coins in the payment field, the application scenarios are decreasing, and the Litecoin consensus is not as strong as Bitcoin. The future market resistance of Litecoin is high:

“For miners, mining will choose the strongest bitcoin.”

Justin Zhao revealed that the ant mining machine L3++ is now shut down, and the latest L5 has not been released to the market:

"The overall LTC price is already close to the cost of electricity."

In the recent interview, Li Qiwei also said that it is possible that some mining unions will turn off their machines, but the difficulty of mining will be re-adjusted in a few days and everything will return to normal.
Captain Yu also reminded investors who are interested in mining. After the halving, if the price of the currency remains unchanged, some machines will be eliminated. “The calculation will produce new changes. For investors, it is more secure to buy coins directly. Strategy."
Interaction time
Do you think Litecoin can still buy?
Text: Wu Xusheng
Source: Public Number: Honeycomb Finance News
The above only represents the author's personal opinion and does not represent Babbitt's investment advice.