On April 11th, EDCON 2019, the most watched series of the Ethereum open source technology community, was held at the International Conference Center (ICC) in Sydney. EDCON is sponsored by the Ethereum community member Ling Ti Technology and is held annually in different countries .

As one of the most watched technical conferences in the blockchain field, EDCON aims to discuss the latest updates to Ethereum and the topics of greatest concern to developers.

This year's EDCON conference was held in the form of "EDCON Week", including hackathon and keynote speeches, covering shards, new developments in Ethereum 2.0, chain/chain technology, Plasma, and Snark .

In the first day of the conference, including Ethereum founder Vitalik Buterin, as well as Karl Floersch, Hsiao-WeiWang, Justin Drake, Danny Ryan and many other Ethereum core researchers, all of which brought new developments in their research over the years. And thinking about the future of Ethereum's ecology.

At the beginning of the meeting, these great spirits of the Ethereum community came to a soul dance step. The V god, which has always been low-key and restrained, was bold in playing Freestyle, and played a large section of Rap. Live off an "Ether Place Idol Heaven" .

The traffic party can look at the dance steps in this picture, and also know your V god? 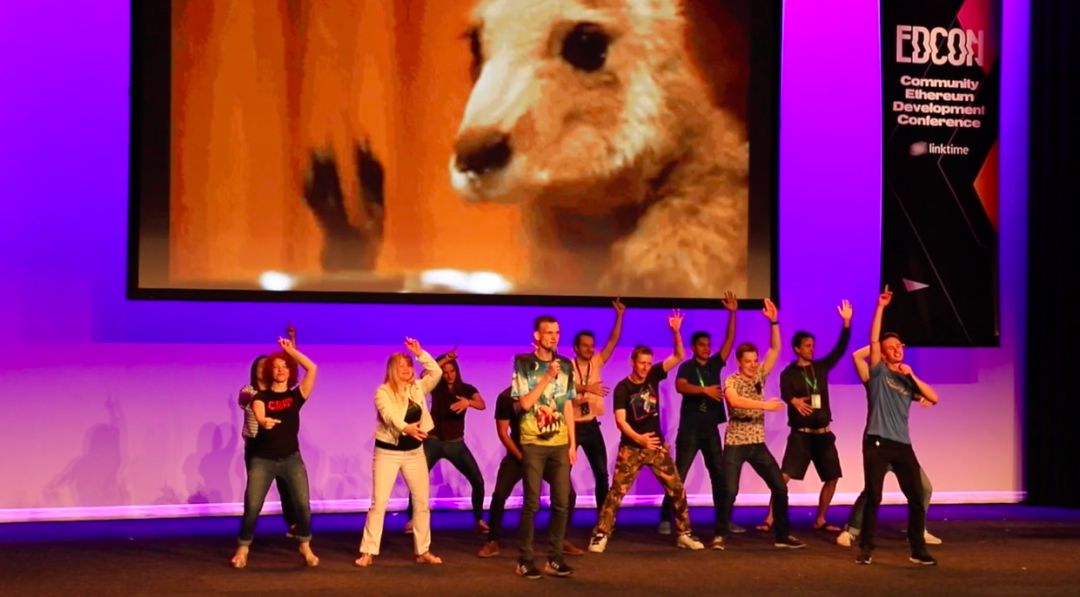 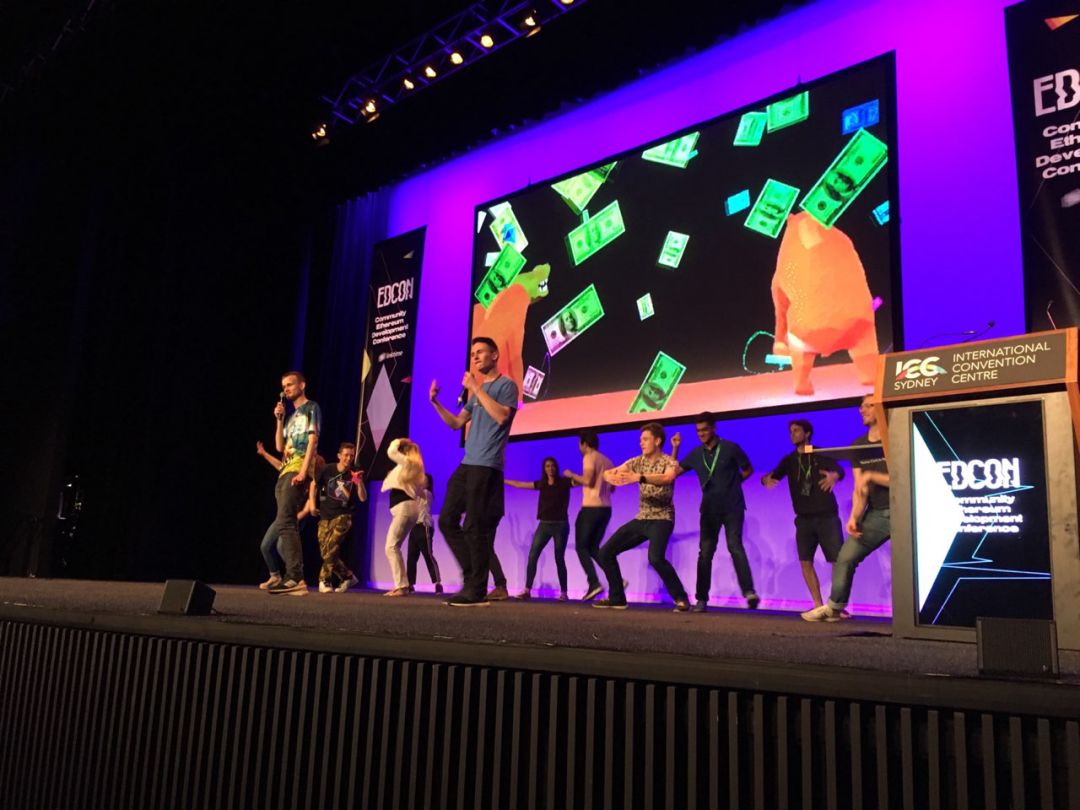 Of course, in addition to singing, V God and a group of great gods also brought a dry speech .

Next, follow the battalion commander on the front line, and let the big dry goods go to the net in the first time! Good morning everyone, today I will talk about a very big progress in Ethereum, that is CBC Casper, and its application in Ethereum 2.0.

First of all, I want to tell you what CBC Casper is. The author of CBC Casper is Vlad Zamfir, a new asynchronous BFT consensus.

There is a module in the CBC Casper consensus that defines which chain is the best. Creating a block based on this chain can strengthen the authority of the chain.

As you can imagine, each block contains complex information. Starting from the creation block, each validator (Validator) can create a block. If there are 5 verifiers, if the block itself can score 1 point; if there is another block to support it, you can Play 2 points; there is also a 4 point block (and the 5th node is not the latest block). The newly created block will select the block with the highest score, which is the basic principle of LMD GHOST.

You might ask why we use LMD GHOST for two reasons.

First, the "longest chain" principle does not apply to multi-chain parallel scenarios. In Ethereum, a new block is born every 14 seconds, but the problem is that when this block is born, multiple identical blocks may be born at the same time due to network speed or other reasons.

Second, most people will not defeat the majority. As you can see from the figure below, except for B, there is no way for others to add blocks to the same chain, so the block of B will disappear. First, choose the bottom chain, because compared to the single blockchain supported by only one latest news, the bottom chain has 4 pieces of support for your latest news, and then supports the middle chain in the next fork. The end result is the same as the longest chain.

In fact, in a network that works well (that is, the orphan rate is low), most of the time LMD GHOST and the longest chain rule give the exact same answer. But in more extreme cases, this is not necessarily the case. For example, let's consider the following chain, which has a three-block bifurcation

The blocks are weighted according to the length of the chain. If we follow the longest chain rule, the top chain wins because the top chain is longer.

In addition, CBC Casper has many advantages, including:

Finally, with regard to the deployment of CBC Casper, V God emphasizes that any block you create must contain information about the previous blockchain, which is a private information chain.

Danny Ryan: The progress of Ethereum 2.0 First, a detailed summary of the progress of Ethereum 2.0 was made, and it was pointed out that Ethereum 2.0 has made great progress in the past 12 months. First, in early 2018, Ethereum began a hybrid solution between PoS and PoW, which was particularly important in the middle of the Casper FFG protocol; and the management of the shards through the SMG.

However, these two directions were completely negated in mid-2018, new solutions were proposed, and attempts were made to find a way to organically connect them. include:

Therefore, by January of this year, we have made some progress, including some details of the release and optimization of Phase 0, the release of the details of Phase 1, and the online test of client testing. Among them, the first layer (PoW) part is the current Ethereum main network.

The second layer is the Beacon chain, which is the first component to be delivered and has been developed to version 0.5.1. The Beacon chain is an extremely important component of Ethereum 2.0. Its features include:

The third layer is fragmentation, which is a consensus based on data. Finally, layer 4 is the state execution layer responsible for the transfer of contract status.

At present, Danny has already started the 0th phase and started the first phase of work. As for the time, Danny admits that it is not yet possible to give a definite timetable, but it is already working hard.

In addition, Danny also pointed out the difficulties faced by Ethereum 2.0 in the process of implementation. This includes the advancement of consensus testing, optimization of 4 million verifiers, network stability, determination of state synchronization mechanisms, verifier UI/UX design, verification tool development, and more.

Therefore, Danny admits that Ethereum 2.0 requires more people to contribute. However, Ethereum 2.0 is not far from us. In the third place, Hsiao-Wei Wang, a core researcher at Ethereum, as a female developer with a small number of Ethereum, Hsiao-Wei Wang has been working on the field of fragmentation. It is also the old face of various offline meetings in Ethereum.

In today's speech, Hsiao-Wei Wang elaborated on the Beacon chain verifier's declaration cycle on the Ethereum platform from the perspective of a Beacon chain validator. So how do you become a verifier of the Ethereum Beacon chain? A total of 3 steps.

First, call the deposit contract with the MAX_DEPOSIT_AMOUNT function and send 32 ETHs to the contract;

Next, look at the status of the deposit contract, including three kinds of logic, as shown below:

Finally, wait for the execution result of pseudo-randomly sampled.

As a verifier, there are also some responsibilities. In phase 0, it mainly involves launching a valid block on the beacon chain and proving it.

Finally, Hsiao-Wei Wang revealed that there are several stages to achieving network stability, and they are currently working on serialization and BLS signatures. Justin Drake was the fourth guest to appear in the morning, and his presentation was based on the Ethereum 2.0 Custody certification.

In the speech, he first proposed the problem of data download in the current system. Because of the large number of fragmentation chains, if the download speed of a slice chain is 1MB/minute:

Then the time spent on multiple shards is an astronomical number.

If there are 2/3 of the honest verifiers in all the verifiers, more than half of the verifiers selected in the verifier's committee are honest, and the final voting result is guaranteed to be greater than or equal to 1. For more details on the Beacon chain and Custody, please refer to the official documentation:

Karl Floersch: Looking at the latest developments in Ethereum expansion from Plasma 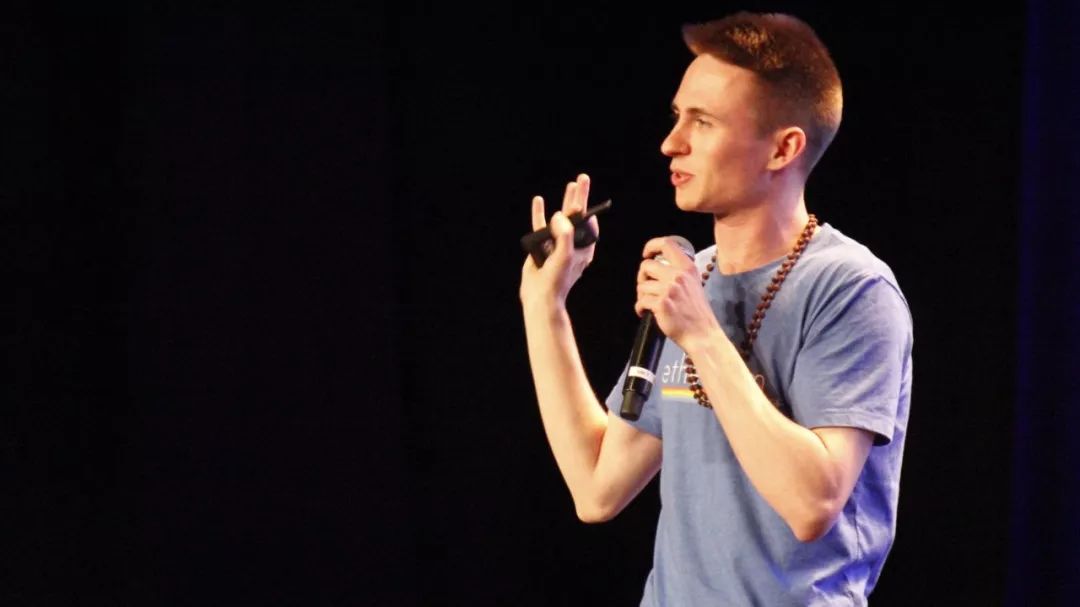 Remember the little cute Karl Floersch who came to Beijing with V God last year to participate in the 2018 Ethereum Technology and Applications Conference? In this EDCON conference, he continued to bring the latest developments in Plasma with a rich body language.

As we all know, throughout the 2018, Ethereum's focus is on capacity expansion. In the expansion plan, Plasma is a very important solution. It is similar to Bitcoin's lightning network and is not exactly the same.

As the head of Plasma and the core researcher of Ethereum, Karl Floersch also brought the latest developments in Plasma and explained the advantages of the Layer 2 solution to the audience. Oh, yes, Karl Floersch is also the lead dancer in the Ethereum Idol.

At the beginning of the presentation, Karl Floersch first explained the benefits of Plasma, such as a chain-based solution, not limited to 15 seconds of block time.

However, with the launch of the Plasma test network, there are more and more rumors about it. For example, there are more than 50 Plasma chains deployed; each has a processing capacity of more than 2000 transactions per second; thousands of blocks are generated.

For these rumors, Karl clearly reminds developers, and don't believe it!

Currently, the capabilities that Plasma has implemented include only the following:

After introducing the latest developments in Plasma, Karl explained the comparison between Layer1 and Layer2 from the implementation principle. To put it simply, the Layer 2 solution is to take the business processing links such as calculations and transactions to the outside of the main chain, and only the final state is recorded in the main chain. This will not only improve the scalability of the blockchain, but also ensure the trustworthiness of the blockchain.

In addition, Karl also revealed that in the future, on Layer 2, it is also possible to extend third-party zero-sum certification generators, as well as third-party storage systems such as aws. At the same time, Plasma's verification process is as follows: Finally, when it comes to Plasma and expansion, Karl believes that they currently achieve the following three points:

But there is still a lot of work to be done, including verification of core contracts and a more complete code base.

These jobs undoubtedly involve a lot of people's participation, but Karl is very optimistic about this. The last page of his PPT reads “Great Love Without Borders”. It seems that he is very much looking forward to people from all over the world participating in the construction of Plasma. .

Thanks to Ling Titan Technology and Catherine Guo for their assistance and support!