If you have encountered the terms of justification and finalization in the process of learning about Ethereum 2.0, but don't know what they mean, I hope this article can give you some inspiration.

First, we try to understand what finality is . [Note: There are also translations that translate finality into "certainty"]

You must have noticed that the cryptocurrency platform and Dapps (decentralized applications) usually wait for several blocks to be finalized before treating your transaction as a "confirmed" status. This is a way to ensure that a transaction is "nearly" determined, or that the transaction is "almost" irreversible , that is, the transaction has been "finalized."

Ethereum 2.0 is able to provide a guarantee of finality, an objective fact that the Ethereum blockchain is sacred, not a “near” state. This is very important because it enables faster on-chain communication, ie if a block has just been finalized, the block will not have to wait for multiple acknowledgments.

That is to say, blockchains based on proof of work (such as bitcoin) never contain features that make the transaction truly final; the Ethereum 2.0 chain is designed to provide a more final guarantee than the proof of the workload.

Let us explain it more specifically. First look at a few definitions:

Based on the above information, we continue to explore Justification and Finalization.

Casper is a way to prove and finalize blocks (whether it's a normal blockchain platform or a block generated during an epoch in the Ethereum 2.0 chain). Casper is a generic "gadget" that can be added to any blockchain that needs to be finalized, but Casper is most useful in the PoS blockchain.

The finality in Ethereum 2.0 is the concept that the system determines that there will be no competing, finalized checkpoints , and when this happens, at least one-third of the active verifications The person will be slashed. We call it economic finality.

For the verifier, the biggest benefit comes from correctly correcting the beacon state, rather than performing improper malicious operations.

So what does “finalize” in “finalized checkpoints” mean? Before we explain this, we need to explain what is “justification”.

Note: The above definitions have been simplified to a large extent for the purpose of easy understanding. Some other factors will also be involved, but this is beyond the scope of this article.

Therefore, a “finalized” epoch is actually an epoch that has been “proven,” but there is a key difference – when something is “proven,” you can still revert the time back to re-certification. But when you "finalize" something, it becomes very difficult to rewrite history.

Therefore, the verifier is to prove/finalize the epoch by voting, which is how the verifier votes for the latest known valid status of the Ethereum blockchain .

This is where the fork selection rules come into play.

GHOST is actually a very popular protocol on PoW (workload proof) and other blockchain platforms. The GHOST protocol follows the "heaviest" subtree, the longest chain.

LMD has made "messages" work, that is, the ultimate in the Ethereum 2.0 chain is "driven by the latest news." The message is attestation, all of which comes down to the fact that the forked chain with the most votes will be considered the “authoritative chain” .

The above picture shows the fork-selection rules driven by the latest news: the green block represents the block proved by the LMD GHOST fork selection rule, and the smiley symbol represents the latest attestations, in a block The total amount of proof (the total number of smiles) is the weight of the block, expressed as a number in the block.

In the above figure, although the bifurcated chain at the top is the longest chain, the chain consisting of green blocks below is the “authoritative chain” because the green block contains the most proof. It is the most certifier vote .

Let's take a look at this slide from Ethereum researcher Justin Drake at the EthCC conference about Eth 2.0. 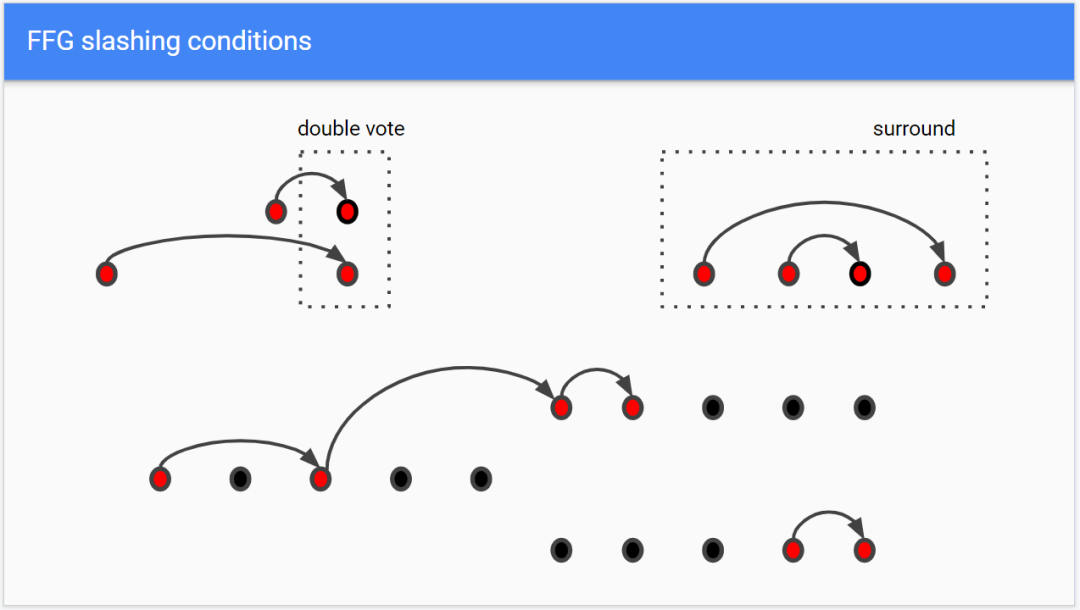 The dotted box on the top right shows that you can't skip some epoch and vote on the next epoch . In other words, you can't cast a future epoch before voting for the current candidate epoch.

The lower part of the figure above shows the two forked chains that have been finalized. The first and second epochs, which are represented by red dots, are the "authoritative chains" that have been finalized, since the two epochs are followed by the third and fourth (indicated by red dots) epoch . However, the third and fourth epoch are present in two parallel bifurcation chains. Which of these two bifurcation chains belongs to the “authoritative chain”?

Let's take a look at the second slide. 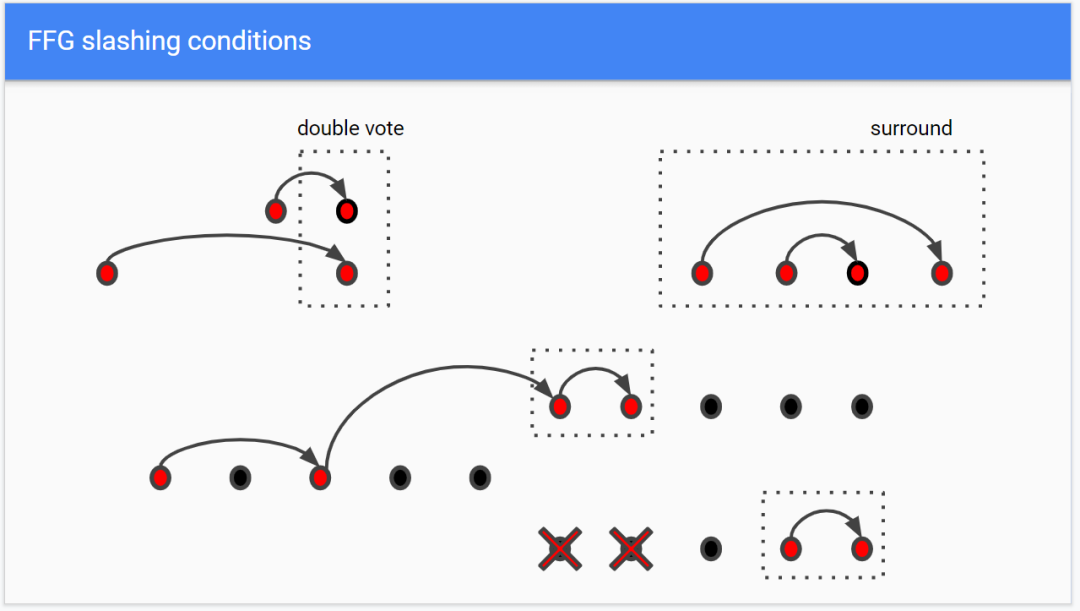 Slide 3
This means that the forked chain below is an invalid fork , because if you follow the two finalized epochs to continue voting, this would mean that the most recently voted epoch will follow one from the other. The epoch of the chain. This is illegal because the finalized checkpoints must be arranged in chronological order . If this happens, a large number of verifiers will be severely punished because most of the verifiers vote for the epoch on an "illegal chain." Therefore, these verifiers must be punished.

That's it! If you are a certifier, make sure to vote only once during each slot and make sure that you are casting and that others are casting. To avoid being fined! (Don't worry, these will be built into the Ethereum 2.0 client you use)

I hope this article will give you a clearer understanding of justification and finalization. If you still have an unclear party, please let me know (Twitter @bitfalls)! Many thanks to Dustin Brody, Mamy Ratsimbazafy, Justin Drake, and Danny Ryan for their help in writing this article!

[The copyright of the article belongs to the original author, and its content and opinions do not represent the Unitimes position. Reprinting articles only to disseminate more valuable information]