In the field of cryptocurrencies, once you touch the issues of freedom and privacy, it is always easy to arouse the interest and yearning of most people . Grin, which emphasizes decentralization and is generally known as Bitcoin 2.0, fits perfectly into the tastes of most people in the field.

Note: On the main line of Grin, Martian Xu Zijing once said on Weibo that regardless of the follow-up development of Grin, the ideal of freedom has always guided people to the way forward. (Image taken from: Weibo)

Dressed in an idealistic cloak, Grin became the first fire of the bear-to-bovine in 2019, which plunged ten times from the market at the beginning of the year, and even with the same gene, Beam easily rose by more than 500 percentage points. . Continuing this rhythm, Grin quickly built his own ecology in the field, on-line exchanges, publishing wallet applications, equipped with special mining machines, and receiving donations from field practitioners, etc. The progress is high speed. However, it should not be overlooked that the achievement of these achievements will inevitably lead to the early promotion of various roads; after the recent heat loss and price squatting again, people can't help but ask questions. How much expectation does the market have for Grin?

The heat is falling, and it does not prevent the supporters from continuing to look good.

On the day of the launch, Grin plunged 97% of the price trend. I don't have to say that everyone is clear about it; however, following the decline in the price of the currency, there is also the market's attention to Grin. Compared with the frequency of news reports that are almost once a day or even several times before and after the main network is launched, Grin's market exposure has actually dropped a lot. Even last month's report on its first hard fork upgrade is very few. According to Tokeninsight and Google Trends data, Grin's Twitter discussion and Google keyword search index have shown a significant downward trend in recent months.

Grin's discussion on Telegram and Twitter in recent March (data from: Tokeninsight)

Affected by this, on July 20th, mining machine manufacturer Obelisk issued a notice saying that due to lack of development funds and users' lack of interest in Grin, they decided to cancel the GRIN1 (Cuckatoo31) mining machine project and will be fully refunded according to the subscription price. The user of the series mining machine. Although the mining project collapsed and Obelisk lacked consideration of C32 (C31's iterative algorithm), it is undeniable that this incident also indirectly reflects the market concerns that Grin's development is not as expected. According to the head of the China market of Xinghuo Pool, the development of Grin ASIC mining machine is not technically difficult, and more concerns about market expectations. Previously, miners have achieved successful production in the laboratory, but the cost of ASIC mining is related to R&D, tape-out, marketing, warehousing and logistics. However, the current Grin's inflation rate, total market value and currency price cannot support a large number of manufacturers to distribute goods, so they are basically waiting to see the state. 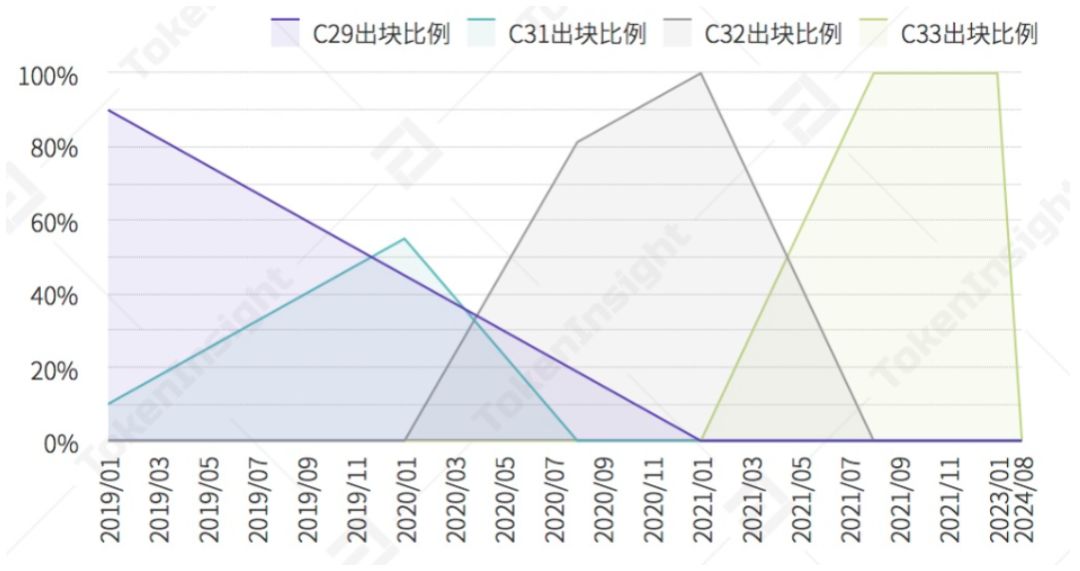 Note: Grin uses the algorithm called cuckoo in the PoW consensus mechanism on the block. This algorithm is divided into anti-ASIC C29 and ASIC-friendly C31. According to the design, the initial C29 algorithm will produce 90% of the blocks, and C31 will only produce 10% of the blocks. In 2020, it will gradually adjust to 55%, and in August of the same year it will be reduced to 0%. (Grin mining algorithm adjustment chart, from: TokenInsight)

Although Grin's market attention is not as good as before, from the interview results of the Hash faction, supporters' expectations for this red-hot project are still very high . Netizens who continue to pay attention to the development of Grin said that the decline in heat is normal and unlikely to be hot. At present, he feels good. If the mw agreement becomes mainstream in the future, Grin and Beam will have a good performance. Bitcoin full-time player Roger is convinced that Grin is a medium- and long-term investment project, and it is only a matter of time to develop. He will start when his price drops a little. The coin COO Xiong Yue also told the Hash faction that most of the hard bitcoin players like Grin.

There is no IC0, no pre-excavation, no investor's “three no resumes”, the core developers leave and the founder can say goodbye to the decentralized management mode, plus the developer's quiet work in the first three years of the main online line. And the innovation of the MilmbleWimble protocol in terms of lightweight and scalability; Grin's clear stream performance does make it difficult for supporters to extinguish their confidence and expectations, but the current support for the market seems to be tending to profit-seeking miners and miners, and Non-Grin supporters or believers .

Squeeze into the top 100, but there is no semi-hair relationship with ecological development

Taking advantage of the heat of the launch of the main network at the beginning of the year, Grin has been online for more than 20 exchanges in less than a month; but now more than six months have passed, only two new platforms have been added to the Grin trading platform. . And the data on Coinmarketcap shows that the current Grin daily trading volume is only 29.87 million US dollars, less than two-thirds of Beam's daily trading volume.

Although the scale of the transaction did not make much progress in the subsequent stages, Grin relied on the strong rise in mid-June, and the market value has successfully ranked among the top 100 in the cryptocurrency rankings, currently ranked 96th. According to industry insiders, in view of the fact that the privacy currencies such as Beam and Monroe are rising at the same time, the price increase of Grin may be related to the upcoming closure of US services. However, it is worth noting that the news was released on June 15th, and Grin turned from sideways to rising trend from the beginning of the month. Therefore, compared to the positive impact of the news, this wave of price spikes is more like a man-made pull.

In fact, like the Roger mentioned above, some of the market optimists are more inclined to wait and see whether they hold Grin . First, because Grin has not yet had a real payment and usage scenario, the second is affected by its way of sending money. Specifically, according to Grin's uncapped pass-through model, the inflation rate in the early stages is extremely high, and the new currency excavated every minute is diluting the value of Grin. If you want to maintain value, you need to continuously increase the scope of use of the currency users; but from the current development, in addition to the early supporter Bitcointalk, Grin has no other available scenarios. In other words, the field of squatting and squatting is not discussed. The current large number of Grin is undoubtedly the largest miners and large miners associated with their interests . 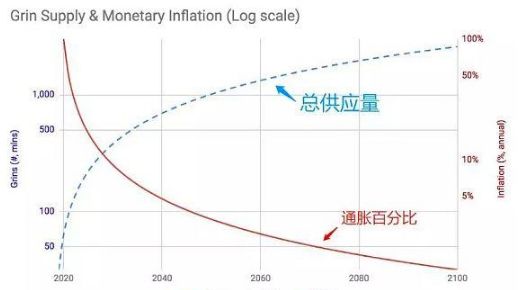 Core protocol, that is, the highlight is also the slot

Coin Xiong told the Hash faction that he is more in favor of the idea that the co-founder of the slow fog technology cousin published on Weibo – there is only one important breakthrough point of Grin and Beam: the dark net accepted. Other anonymous coins are the same, otherwise don't talk about core values.

Although it is still an important turning point for the development of Grin, it is still to be verified; but one thing is clear: if the characteristics of Grin's strong anonymity transaction are not used, and it is difficult to find a suitable application scenario in the next development. The outlook for the Grin and MimbleWimble agreements is always just a piece of paper.

Only when it can be implemented can we talk about the technical value, and we can only say that it is empty talk. For Grin, the development of the MimbleWimble protocol, dragging it forward is also the MimbleWimble protocol . The agreement, first proposed by Tom Elvis Jedusor (a pseudonym) in July 2016, received a lot of praise in terms of privacy and scalability. The LTC founder also expressed interest in the agreement. It is currently exploring the addition of MimbleWimble technology to the Litecoin blockchain expansion.

However, the agreement requires some form of communication between the recipient of the transaction and the sender to arrange for the transaction to be signed by both parties, making it more difficult to create and send the transaction. The complexity of this transaction process greatly reduces the current convenience of Grin and also leads to other traditional network security issues. Cosin once mentioned on Weibo that Grin's subversive transaction design will give the public an adaptation period of horror; and Xiong Yue also said that the highlight of Grin is MimbleWimble, which has not been widely used at this stage because of it because It is not very easy to use now.

Note: On the 17th of last month, some netizens spit on Weibo. When Grin was able to produce a wallet that was as easy to use as mymonero.

Many analysts have said that Grin was made by the Chinese media. To some extent, this kind of hype and propaganda is not negative, because Grin's technology does have a lot of attention and scrutiny, and proper hype and push-up also invisibly promote their development. But like many star projects in the currency circle, Grin is caught in an embarrassing situation where there is no redness but no landing. When technology has not been applied and proven to be viable, projects and related derivative ecosystems can easily become speculative tools for market stakeholders, such as Dapp, which dominates gaming, as well as miners and large miners that we discuss today. Grin, whose interests are wrapped up. Of course, it is not so easy to get rid of Grin's beliefs and expectations, but most people can only wait patiently and wait and see.

[1] Wang Jiajian, "Grin mining machine has a 20,000 US dollars, earning thousands of dollars a day, Asic mining machine is about to start fighting", Babbitt

Cryptographic Analyst: The average price of BTC mined this year has increased by 22%, and miners may realize revenue in 2020.