The BTC trend continued to drop in the early morning, but it was not too deep, and failed to break the previous low point and failed to form a broken position. The current trend is not continuing to test downwards near the low point. The hourly STOCH indicator has been running under the 20 horizontal line for a long time. Maintaining a stale attitude, the fork has been formed, and the short-term trend will be further explored. If it still does not break the low point, the trend will shift to the rebound phase.

The daily trend has been adjusted around the 10-day moving average. The 5-day moving average is down. The short-selling market is constantly giving downward pressure. The long-term support is constantly being weakened. The previous upswing failed to achieve an effective breakthrough, thus making the long-term sentiment The signs of falling into wilting are reduced, the MACD indicator has been flattened, the upward momentum is no longer supplied, and the rhythm has been transformed into the empty market. The downside posture will continue to be maintained. Once the current low point is broken, there is no key support below, and it may be further Breaking 11,000 fell to 11,000 area.

The STOCH indicator continues the downward fork posture and continues to go down the 80 horizontal line. The RSI also runs downwards. The follow-up will continue to maintain the downward trend. The trend will also form a process of continuous exploration. The Bollinger Band is in an open position. The upside space is still open. If it can stand at the current low point, it will still give some chances of rebounding; Chen Chuchu suggests that the short position is the main one, and the multiple orders are supplemented. The current trend is in a low position and can be moderated in the low point area. Followed by 11200-11300, if you fail to rebound beyond the 11500 position, you can choose to leave directly. The empty order is recommended to follow up around 11400-11600. You can see the low point near 11220, and break this easy low point to continue to hold. When you see the 11,000 position, you will choose to leave the market in time after the profit in the operation, and make a safe operation plan to ensure that the income can be carried out smoothly and effectively. The trend further explored to the lower part of Bollinger Band, and the current small stock rebounded. The recent continuous decline did not break the key support of 200. If you can take the opportunity to gather long-term energy in the region, then the rebound will rise. It will also come, the STOCH indicator double-line intersects and bonds, the RSI keeps running upwards but has a flattened posture, so it is still a trend of oscillating adjustment, which can be operated in the 200-210 area, if it can be separated from the area Forming an effective offensive, the trend will enter the rising phase. Chen Chuchu suggested to look at the high altitude and support 200, with a resistance of 220. 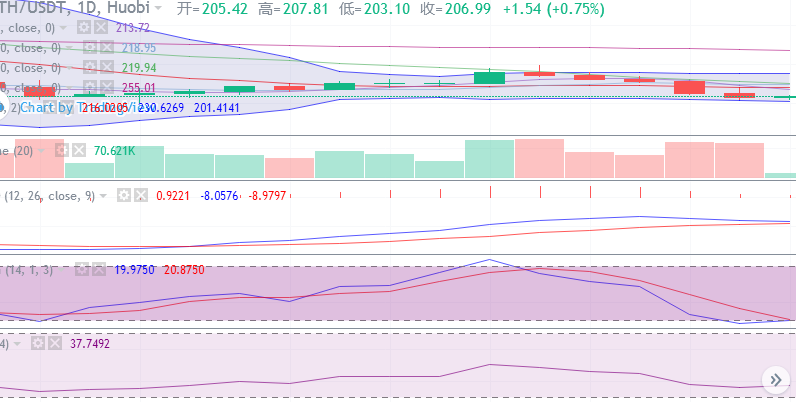 At present, the Bollinger Band has been broken. Although the trend has returned to the Bollinger Band, it has been subjected to the 5-day moving average, which has caused the rebound to fail to form an effective breakthrough. The STOCH indicator is upward, and the rebound will be given. However, the MACD indicators remain parallel, and the fast and slow lines are about to intersect, the bullish sentiment is sluggish, and the amount of energy is also in a sluggish state. It is difficult to form a strong rising posture in the short term. The short-term proposal is mostly single-based, and the bargain-hunting is effective, returning to 0.30 effectively. After standing firm, enter the shock market. The five-day downtrend also allowed the empty side to be emptied, and the bullish rebound was also established at the bottom, but the current trend is still suppressed by the 5-day moving average, and has not yet given room for rebound, then it can regain its stability 80- In the 85 area, the rebound trend will continue to continue, keeping the bottom and more ideas. The trend went down to the middle and lower rail zone of the Bollinger Band. Currently, with the help of the 300 support line, it has formed a rebound. Once it was tested on the middle of the Bollinger Band, the strong posture has once again been reflected. Currently, it is temporarily blocked at 320, but the STOCH Golden Fork has already formed. The RSI will also maintain its upward posture. The uptrend trend will continue to be maintained. After breaking through the current resistance, it will continue to move toward the 10-day moving average, with more singles, dips can be laid, support 300, resistance 330. The recent repetitive BTC has been expected by the author. It has repeatedly given advice on the low point of the empty order, and also allows everyone to avoid the risk in time. The current pressure still exists. Whether the mainstream currency can stand still is also very good for the current situation. The big impact, then we should seize the opportunity to enter and exit in time, and receive the profits, only the real benefits are the real guarantee.