Foreword: Is the price of Bitcoin entirely driven by speculation? According to the principle of supply and demand of economics, bitcoin price changes are also affected by five major effects, which are affected by various factors such as supply, demand, trading volume, miner competition, resource opportunity cost, and difficulty adjustment. This is a trending motivation to understand the bitcoin price from the bottom of the perspective, enriching our understanding of Bitcoin's value. The writer is Prateek Goorha, translated by the "Blue Fox" community "SIEN".

The value of Bitcoin has little to do with the fluctuations in its usual price. High speculation often outweighs rationality. Of course, existing and anticipated financial market innovations, increased or decreased regulatory risks, and false information can create very complex interactions.

But the price is very important. If you are interested in Bitcoin, but you don't care about its price at all, it's a bit like you are interested in gold, but only concerned that it is an element of the periodic table. However, from watching the chart to dancing with the emotions of the traders on Twitter, you may not learn the value of Bitcoin.

You need a deeper understanding of the price of Bitcoin, which is related to the unique effects of Bitcoin, and how to integrate them in a fun way in the market.

Therefore, I hope that this article will give you a simple supply and demand model. To make the model more suitable for Bitcoin, I will list the five fundamental effects that have a crucial impact on bitcoin prices. I really hope that I can help you appreciate the beauty of the forest, rather than being distracted by strange trees.

Supply and demand for Redux

Let's start with the supply and demand model. The five major effects are part of the overall market dynamics, and together they help us to observe the whole. In short, the model shows how the market price of Bitcoin comes from the idea of ​​spider web supply and booking demand.

The spider web model was developed in the 1930s to facilitate the construction of the supplier. Essentially, it relies on the company's production decisions in response to existing market prices, which lags behind existing market supply and future market supply. Suppliers produce at current resource costs and allow these ex ante supply decisions to have delayed consequences in the market.

At a given price, such as P1, the supplier plans to produce in advance in Q1 quantities. After that, the product was sold, and the price dropped to P2 due to excess market products. Lower prices have prompted producers to reduce planned production. At this time, the price rose due to a shortage of market products.

This feedback loop of the lag response results in a "spider web effect" on the demand supply map. As shown in the figure below. Two spider web models are possible: depending on the relative elasticity of supply and demand, the spiral can lead to explosive price dynamics that are far from price equilibrium, or it can cause the market to converge on equilibrium prices.

Several important aspects of the spider web model can be challenged, the most important of which is the learner's learning. In fact, there seems to be reason to believe that when producers adjust their expectations for future market prices, the fluctuations in spider web supply should be more calm. While this may be the reason why the model is not popular in economics, the spider web model has a lot of insight into the bitcoin case for a very good reason.

When a specific market price is expected, bitcoin miners can choose to increase inventory to suppress the effects of divergent spider webs. For miners, this ability is directly dependent on the halving of each block reward and the gradual increase in average production costs. The impact of these two aspects has led to a gradual reduction in supply elasticity, although inventory can be maintained, depending on miners, large retailers, and holders of long-term commitment to Bitcoin. As bitcoin matures, fluctuations between divergent and converging spider webs become less noticeable.

The key to the above is to understand the role of demand. Not only the relative elasticity of demand, but more importantly, the change in demand. The adverse effects on demand (causing it to move to the left) exacerbate the explosive nature of the divergent spider web and place a huge burden on the supplier's ability to hold as inventory.

The supply and demand relationship chart drawn above depicts the usual “Marshall” market, which is familiar to students who have studied basic economics. However, demand curves like this tend to mask the assumption that they aggregate different types of consumers. Specifically, companies with booking needs may increase inventory for their own benefit.

The reason why the company can have a predetermined demand for its own production is already clear, and its reason comes from the spider web supply model. Suppliers often face strong production conditions, forcing them to plan the order of production before sales and require them to maintain a reserve of production.

Expected increased resource costs or uncertain regulatory changes; threats to technological change; cyclicality of market interest, and many other factors can spur producers' apparently demanding demand, which may not coincide with actual consumer demand.

In this context, Bitcoin also increases the institutional parameters in the form of difficulty, and adjusts to coordinate the competitive effects and resource commitments that miners must undertake. Of course, the prospect of halving will cause the supply curve to become increasingly inelastic. Booking requirements. The real demand represents the obvious consumer demand plus the booking demand from the supplier (the inventory produced during that period), which is pre-restricted.

Thus, the above is a quick description of the supply and demand model, which is useful when understanding the latest news stories or how development will affect supply and demand. Now, with the hard-core data from Bitcoin to fill the details of this model, let's take a look at five key factors.

The five basic aspects of Bitcoin:

We will now consider each effect and consider the proxy variables that can be used to develop the overall statistical model. The results of the analysis are presented in the last section.

It is important to understand that these effects are important to Bitcoin, so any bivariate model that just picks one of these effects may be incomplete. With this in mind, I have shown that each of the five effects will have a partial impact on the bitcoin price in subsequent sections.

Prices are plotted according to the time period, and the time coverage from July 17, 2010 to May 14, 2019 constitutes 3,224 observations of the overall regression model. (Blue Fox Note: The regression model is a modeling technique that is primarily used for forecasting. It focuses on the relationship between the target and the predictor.)

Limited supply is the cornerstone of Bitcoin. Understanding why spider web supply and scheduling requirements are key to understanding Bitcoin as the right tool for the economic market is also critical.

Here, I use a variable called the "upper limit" method to represent the finite supply effect. The idea is that production close to the upper limit will affect the miners' production plans. The strong convex supply curve is a common view of miners, and the upper limit approach makes market participants more and more clear over time.

The figure below shows the price and cap methods, and you can see the relationship between them. The inset text shows the effect of the finite supply effect (which is limited by all five effects in the broader model context). The effectiveness of any market model is regulated by market dynamics. Spider web supply and scheduled demand models are no exception; if there are no robust orders in the market, the relative position of the apparent demand becomes more difficult to establish than the real demand. This, in turn, makes the prediction of convergence and divergence in the spider web model more difficult to predict.

The chart below uses the number of market transactions as a proxy variable for market dynamics effects. 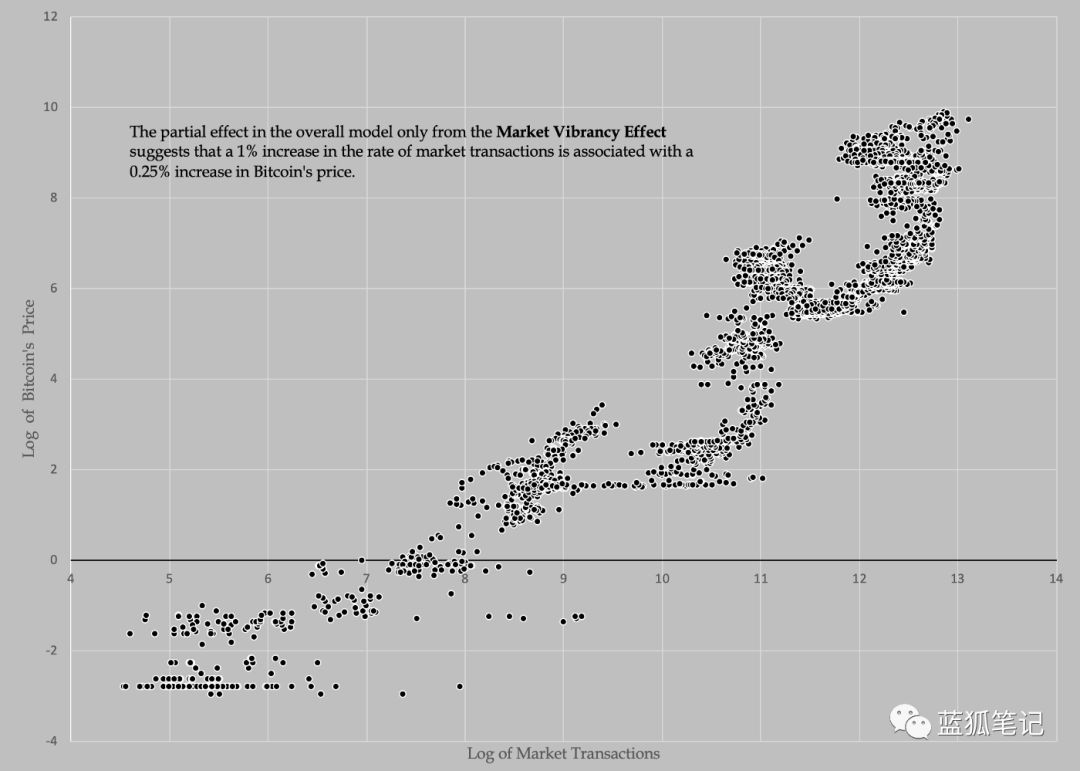 The chart below shows the results and illustrates some of the impact of competitive efforts on bitcoin prices. Resource constraints are critical to motivating producers to supply supplies before they can fulfill their needs. The greater the impact of the opportunity cost of deploying on production resources, the more likely producers are to plan production, hold inventory and influence market prices by the rate at which inventory is sold. The hash value represents a powerful candidate for the proxy variable for this effect. The figure below shows the results and shows the partial impact of the hash value on the bitcoin price in the entire model. This last effect is my favorite. The reason is very simple. It forces us to face a rude fact: the rules of the game of Bitcoin are fundamentally different from other economic markets. In these economic markets, we learn to learn from the school. The supply and demand chart to describe.

The structure of the overall bitcoin market is represented by an algorithmic mechanism that manages its functions. I don't like the word "management" (or governance), which is why I appreciate Bitcoin, but in this context, the term is appropriate. If market participants can adjust their strategies in this situation, and the market can move from its idealized concept to a completely different way of operation, then it will not be parameterized in any meaningful way.

Bitcoin is parameterized and it can be said that there are no proxy variables that are better than the difficulty adjustment variables. This is because the miners change the difficulty of the production plan; because of this, the feedback loop of the spider web model does not suddenly exceed the limit, resulting in extremely excessive production or serious shortages.

The overall regression model with five effects is shown below, the coefficients are important, and the overall model specification is also important, and R-Squared has a low correlation of over 97%. There are many statistical issues that need to be addressed, but they are beyond the scope of this informal article. However, it does make the information clear:

The value of Bitcoin stems from an understanding of demand and supply, which for most people is a disturbing new thing (especially for most economists!). Moreover, its intrinsic value relies heavily on the solid foundation provided by these five major effects.