In the first half of the year, DeFi is undoubtedly one of the industry's outlets. Many people think that DeFi is the best application of Ethereum smart contract, even the best landing scene of blockchain. Debit, decentralized exchanges and stable currencies basically constitute DeFi's “troika”, and the development of the lending market is particularly striking.

According to DEFI PLUS, as of August 6, the total lock-in position in the lending market was approximately $461 million, an increase of approximately 75.95% compared to $262 million on January 1 this year. DeFi lending products have achieved tremendous growth this year. Recently, however, some media reported that Dharma locks in one of Ethereum's mainstream lending products plummeted 74%, and users could not raise coins, which cast a shadow over the strong development of DeFi.

Has the market over-interpreted the decline in the amount of Dharma locks? What is the real status of DeFi loan products? PAData selected five mainstream lending products from Ethereum, Maker Dao, Compound, Dharma, dY/dX and Nuo Network, to observe the current status of Defi lending products through the changes in the balance of their lending assets and trading behavior trends.

The overall lock position declines DAI is the most loaned asset

According to DEFI PLUS statistics, although the total lock amount as of August 6 has reached 461 million US dollars, up 75.95% from the beginning of this year, in fact, the lock market amount of the entire loan market was set from June 27 this year. After the high of 602 million US dollars, it has been declining and has dropped by about 30.59%. 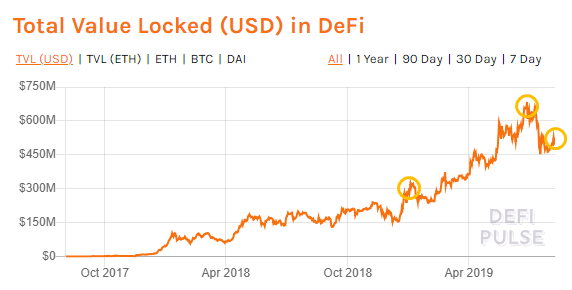 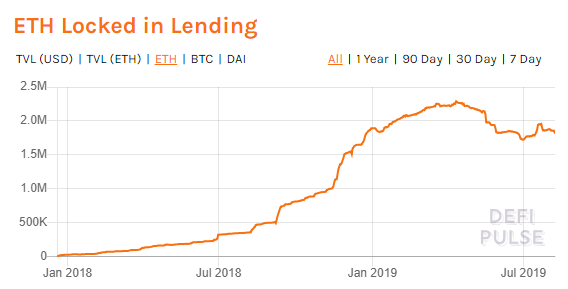 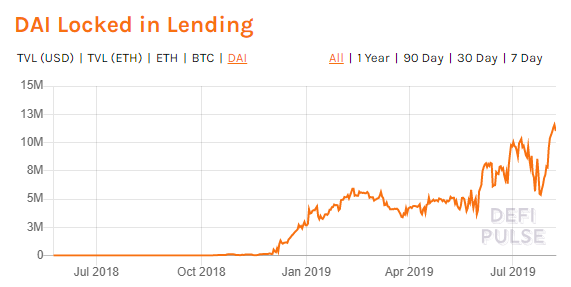 However, if converted into US dollars, ETH is still the most assets currently locked. According to LoanScan's lending statistics, as of August 7, Maker, CompoundV1/V2, Dharma and dY/dX had a total loan amount of approximately $98.28 million in the most recent month. The number of transactions was approximately 46,700 times, with an average loan per loan. It is about $2,103.

From the perspective of lending assets, DAI is currently the most important lending asset, accounting for 69% of total loans, followed by USDC and ETH, accounting for 20% and 11% respectively. Other lending assets mainly refer to ERC-20. Pass is only less than 1%. The possible reason for DAI's share of the main lending market is that Maker has an absolute dominance in Ethereum's lending market, while Mkaer only offers DAI lending. In addition, the USDC is the most borrowed of all the French currency stable currencies, and it has successfully caught up with DeFi.

Pan Chao, head of the Maker Dao China community, told PANews that this is related to Circle and Coinbase behind it.

“USDC’s issuers Circle and Coinbase have common US dollar exchange channels, regulatory advantages, credit guarantees and 100% reserves. Other stable currencies, such as USDT, are more risky, people are reluctant to hold them for a long time, and the US dollar channel is not smooth. And the main users of DeFi are still dollar holders."

Holding the most of the WETH Maker Ethereum DeFi "Central Bank"

At the beginning, DeFi lending products in Ethereum mainly focused on ETH, even in the market structure where the current development has been large, the Maker with the largest share of shares only provides ETH pledge. However, the borrowing of the encrypted world often involves two kinds of tokens. The most extensive token form in Ethereum is the ERC-20 token, while the Ethereum's native token ETH does not comply with the ERC-20 standard. Therefore, in order to realize the fast transaction of ETH and ERC-20 tokens, it is necessary to package ETH into a representative conforming to the ERC-20 standard. This is WETH (Wrapped ETH), the packaging process is 1:1 mapping, and the Gas fee is paid.

In other words, all products related to ETH lending on Ethereum are inseparable from WETH, which also provides a unified window for the market to observe the real status of DeFi lending products, that is, the amount of locks can be observed by observing the balance of each product WETH. Although this is not exactly equal, the trend is consistent, that is, it is unlikely that the WETH balance will be lower than the total lock amount. In view of the fact that the current market is dominated by ETH Maker, and the mainstream lending assets are DAIs that can be obtained by pluring ETH in Maker, observing the performance of WETH's chain is equivalent to observing the entire Ethereum DeFi loan products at the source. According to Etherscan browser data, as of August 7, the total supply of WETH is about 1.63 million, spread over about 42,000 addresses, and the total number of transactions reached about 2.33 million.

Among them, Maker is currently the largest holder of WETH, holding a total of 1.31 million, accounting for 80.24% of the total, far higher than other DeFi products. Secondly, dY/dX, Dharma, Nuo, and Compound hold 2.72%, 1.08%, 0.38%, and 0.17% of WETH, respectively. This is a disparity in holdings. This can be seen as Maker monopolizing the lending business of ETH on Ethereum. Pan Chao believes that if Maker is likened to the central bank of Ethereum and provides ordinary users with a discounted window, then other loan products such as Compound are equivalent to Dai from commercial banks and tier 2 borrowing Maker. Maker offers a fixed benchmark rate, and Compound is a flexible lending rate.

Looking at the data on the WETH chain of each product, we can see that the balance of WETH from Maker has dropped from April, from 2.21 million in mid-March to 1.31 million at present, a decrease of about 40.7%. In response, Pan Chao responded, “In the first few months, due to the surge in demand from Dai, Maker has increased the benchmark interest rate in order to control the total supply and stabilize the price of Dai. Therefore, people with borrowing demand turn to the secondary lending market such as Compound. Don't borrow directly from Maker.” But he expects that after the price of Dai is more stable, Maker's benchmark interest rate will drop, and Dai's borrowing demand and amount will increase.

It can be seen from the changes in the number of transactions of WETH that the number of total transactions, pledges, number of loans, and number of new addresses sent and received in the near future have increased significantly from late July. This means that there are more participants in the recent Maker, but the per capita borrowing price has dropped.

This is in line with the amount of MakerCDP recently monitored by LoanScan, which is basically less than $1. This change may be related to Coinbase's activities. According to the Block's earlier reports, the DAI campaign launched by Coinbase Earn on July 26 has driven more than 14,000 CDP creations, about 40% of all CDP's CDP. The effect of the activity is obvious, but the future retention may be a question left to Maker.

Dharma, another big lending product on Ethereum, was reported by the media to have a 74% drop in locked-in assets. On the 8th, Dharma decided to suspend new deposits and loans, and users can withdraw funds that are currently not locked. Judging from the balance of its WETH, there are still 17,377 currently.

However, Dharma appeared "blank 4 days" on July 24-27, with no records on the chain at all. According to LoanScan's monitoring, Dharma's latest loan occurred two weeks ago, after which the user could not withdraw the currency.

DDEX market leader Dai Shichao said, “Dharma is a P2P model, which is a manual combination of borrowing and lending. This process may wait for several days. The sudden drop in the lockout amount is related to their stop of interest rate subsidies, no interest rate advantage, plus manual matching. Inefficiency, everyone is not willing to play." But Dai Shichao also said that after all, Dharma's founding team is relatively high quality, and it is also said that Dharma is ready to turn to the pool of funds, it is still worth looking forward to.

In addition, the current balance of dY/dX and Nuo, which have more WETH balances, has steadily increased, and the transaction on the chain is relatively stable.

According to LoanScan, Compound is currently the largest loan platform on the market. As of August 8, its loan amount has accounted for about 50% of the total market loan amount. However, Compound's WETH balance is very small, which is mainly related to its cToken fund pool model. Its current main borrowing assets are not ETH. According to statistics from its official website, DAI and USDC are the main borrowing assets favored by users at present. ETH has a small amount of borrowing, but on the contrary, ETH has the largest supply on the loan side. Dai Shichao said, "The difference in asset supply and demand will only affect interest rates. The supply can only indicate that there are more people who earn money to earn interest." LoanScan shows that the current ETH deposit interest in Compound V2 is only 0.02%, which is much smaller than 11.94% of DAI and 9.68% of USDC, and ETH has the largest deposit interest and loan interest ratio. If you look at Compound's DAI in detail, compound dai has 6.92 million DAIs, which is about 9.11% of the total. It is the most DAI balance in all addresses, and the balance in the address has been rising.

Moreover, the number of transactions in Inbound is significantly more than that of Outbound, which is similar to the overall supply and demand situation. That is to say, whether it is ETH with less borrowing or DAI with more borrowing, the users who earn interest on deposits are more than borrowers. User.

According to Dai Sechao’s observations, one of the main reasons why major borrowing assets have become stable coins DAI and USDC is:

“The price of ETH currency fluctuates greatly. The stable currency of borrowing is equivalent to putting cash in the balance treasure to make interest, or similar mortgage dollar loan”.

R3 has completed trade finance blockchain trials in over 70 organizations