Once upon a time, everyone’s circle of friends was filled with all kinds of punches. Open a circle of friends and you will find that this friend is learning English, that friend is backing ancient poetry, and some friends have been running for a few kilometers today, so it is not lively.

It must be said that the introduction of external supervision through punching is a very good incentive, and because of this, punching is now everywhere, and the programmer's holy place GitHub has also added the function of punching.

GitHub urges you to write code by counting the number of code submissions you have made in a year. Therefore, a stalk is passed out: the subway station is harder than you . 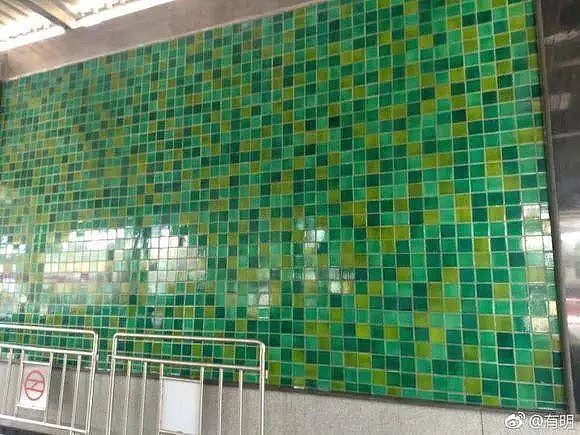 A foreign development brother gave himself a punching challenge of " developing 12 Bitcoin lightning network applications in 12 months. " Can he do it?

Developers are often obsessed with overcoming technical problems, and the booming blockchain technology has brought tremendous opportunities to developers, and has therefore been favored by many developers. The fastest growing area of ​​blockchain technology is the bitcoin sidechain, specifically the Bitcoin lightning network .

In order to better explore the new opportunities brought by Bitcoin Lightning Network, we interviewed a senior developer in the blockchain field. The developer developed a blockchain punch plan for himself: 12 12 bitcoin lightning network applications were developed in 12 months.

As a well-known blockchain scalability solution, the Bitcoin Lightning Network allows users to trade Bitcoin directly by establishing a payment channel without having to wait for several subsequent blocks as in the Bitcoin blockchain. Confirm, because these operations in the lightning network are all done under the blockchain.

This clever design facilitates the user and opens up a huge window of opportunity for developers . For developers, Lightning Network is a great tool because it helps developers without the need for a third-party service provider. Under the premise, the function of cryptocurrency payment is integrated into the application.

In the face of rare opportunities, many developers are vying to be the first to eat crabs, have used the lightning network to develop a variety of strange, funny and even meaningless applications, such as the cloud chicken project Pollo Feed :

Pollo Feed's official website monitors a chicken farm in real time. You only need to pay 1000 Satoshi via Lightning Network (the smallest unit of Bitcoin, 1 Satoshi = 0.00000001 BTC, Satoshi's Chinese name is Cong, 1000 Satoshi is about 1 RMB ) The Pollo Feed will automatically deliver some feed to the chicken farm in the picture to fulfill your desire to raise chickens in the cloud. 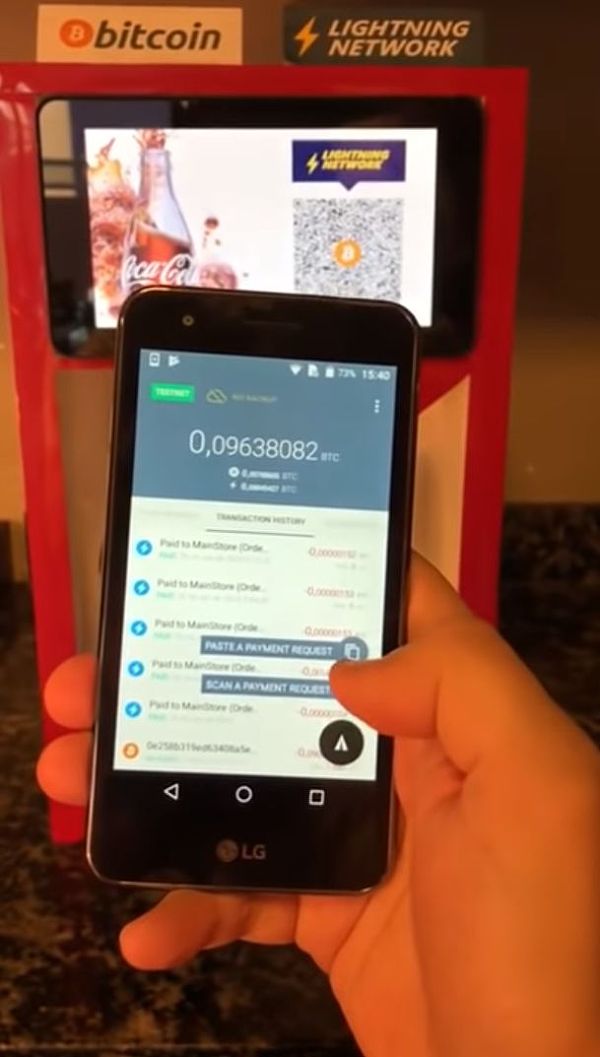 Or recall the childhood through the lightning network, play the paid game Pokémon: 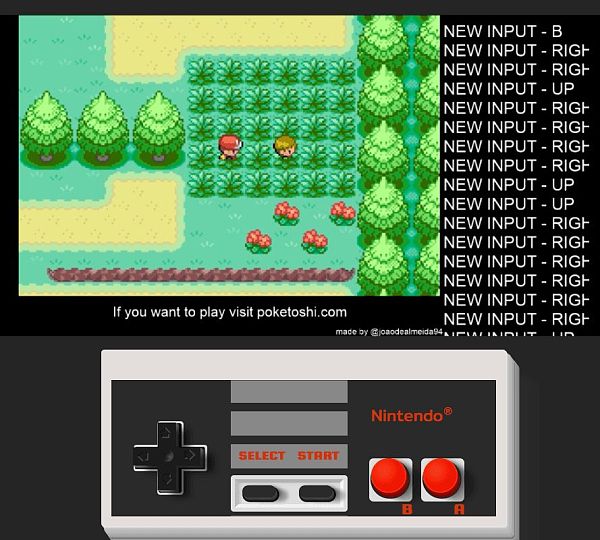 These developers can be said to have opened their minds and brought us a lot of surprises. But the question is, what is the significance of developing such an application? With such questions, we visited Guillaume Verbal.

So far, Verbal has developed four lightning network applications: a Bitcoin Meat Club, an app that organizes carnivorous gatherings , where party meals are paid in bitcoin:

A paid content reading platform called Lightning scratchcards, where posts are like scratches, and users need to pay to scrape each letter to view the content:

An application called Lightning Throne, in which users claim the virtual king's throne through bidding: 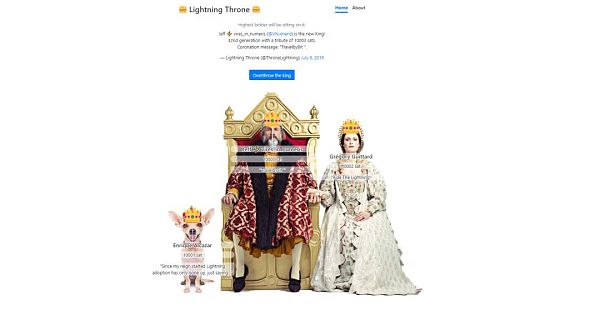 There is also a game called Lightning Connect Four, where both parties pay to participate in the game, and the final winner wins: 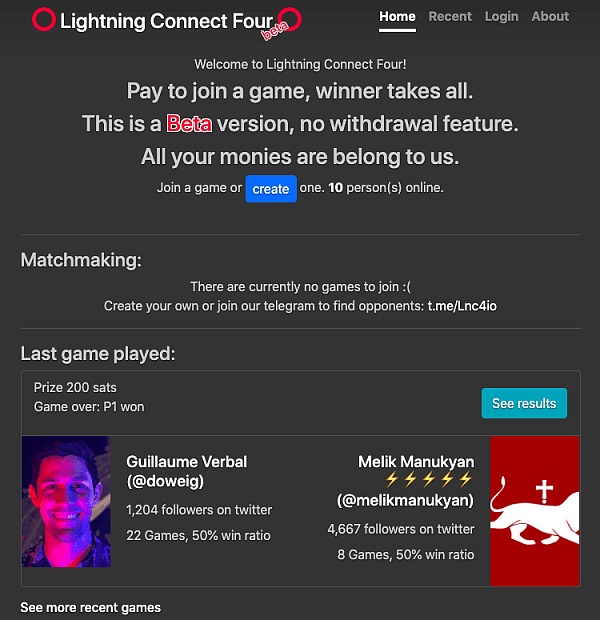 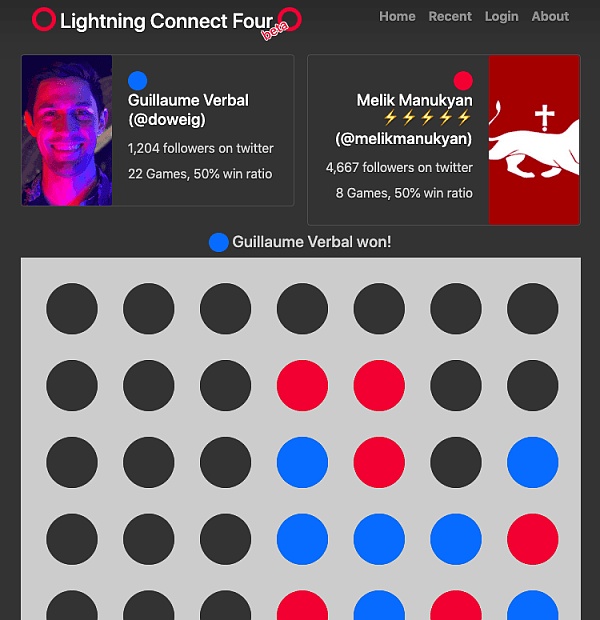 Lightning network four children even cross chess / picture from the official website Of course, from the name of the application you can also see that all users have to pay through the Bitcoin lightning network. Verbal is a Frenchman living in Thailand who describes himself as a bitcoin entrepreneur, a liberal and a carnivorist. On the Internet, Verbal's pseudonym Doweig is active in the developer community. 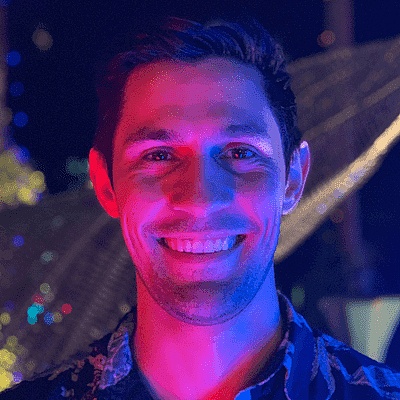 After investing in some bitcoin and Ethereum, Verbal fell in love with cryptocurrency. In 2013, Verbal graduated from the European Institute of Information Technology (EPITECH), the largest computer software information school in France. During his time at school, his Javascript development capabilities were greatly enhanced. It’s Verbal’s dream to do what he likes and earn money to make a living. After graduation, he began to look for opportunities to combine his favorite bitcoin with the professional training he received.

Ever since, Verbal co-founded Clavestone.io, a blockchain software company, but things didn't go as smoothly as he thought. After several months of development, Clavestone launched its first product, but unfortunately, this product did not splash in the entire blockchain tide during the trial operation.

Currently, the company is still in operation, its main business is multi-signature wallet software services, but the company has greatly streamlined this product in order to shorten the development cycle.

“We spent a few months researching this product, but no one was willing to pay for it in the end,” Verbal told us. “ Our entire team spent a lot of time developing the products we think customers want, but it turns out We don't know what the customer wants at all. "

Why give yourself the goal of developing 12 lightning network applications for 12 months?

This experience of starting a business made Verbal understand that the user wanted to develop the application that the user wanted, which was the key to success . In order to do this, he set himself up to develop 12 lightning bolts in 12 months. The goal of the web application and the creation of a project called Bitcoin 1212 (Bitcoin1212) to document its development process.

In the face of this seemingly impossible task, Verbal's secret is to streamline functionality and quickly iterate . Develop an app a month. If the app fails or the feedback is poor, Verbal doesn't waste too much time on it. In his words, this situation will be “ quickly broken ”. Keep moving forward. "

However, this 12-month 12-day punch is not the first of Verbal's. Verbal was originally inspired by the entrepreneur Pieter Levels. The experience of Levels is even more legendary. He founded 12 companies in 12 months, two of which have successfully achieved profitability. The idea of ​​Levels was influenced by Jennifer Dewalt's creation of 180 pages in 180 days.

Blockchain development does not have to be confined to lightning networks. For example, Ethereum has always advertised its great advantages in decentralized application development, and EOS and TRON have also performed well. However, according to Verbal, Lightning Network is the only sensible choice .

“In the moment, Lightning Network is the best choice for micropayments. Although the chain operation cost of the Ethereum blockchain is far lower than Bitcoin, it is still higher than US$1, so Ethereum is not suitable for me. The application scenario," he said, " Besides, applications developed on these blockchains, all operations inevitably need to wait for the blockchain to be confirmed, which greatly affects the user experience. "

He continued, "In my use scenario, we need to be confirmed in 5 seconds, so the stringent performance requirements can only be met by the blockchain second layer solution, and the best possible The only choice is the lightning network."

The underlying technologies are readily available, and what Verbal has to do is innovation. Interestingly, Verbal said that proposing ideas during the development process is not the most difficult part. The real difficulty is to judge which ideas are more attractive to users .

Verbal's development goals began in February of this year, and he thought it would be a great learning experience. The first Lightning Web application developed by Verbal, the Bitcoin Carnival Club, has a problem with a narrow audience, and most people are not interested in it. However, in March of this year, Verbal's second application, Lightning Network Scratch, was favored by many users .

“Lightning Network Scratch has gotten very good results when it was released, and many people have come and experienced it,” Verbal told us. “But the problem is that most users are three minutes hot, and once they have experienced it, they have never returned.” 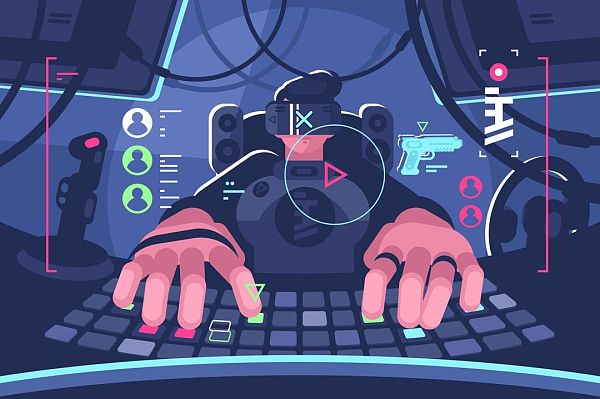 Don't think about solving other people's problems
Solving your own problems is enough.

However, not every plan is perfect. Verbal's current development progress has been slightly behind schedule. From February to now, he has only released four applications. The latest application, Lightning Network, has been released in early July this year.

In the lightning network four-game chess game, players need to spend 100 Cong (about 0.1 yuan) per game, the cost of both sides of the game is the winner.

Verbal said that he would stick to the time node of the time, which means that the experiment will last for a full 12 months, but he will not be overly demanding to complete the development of 12 applications. For Verbal, it's more important to learn something in the development process than to stick to it like a religious belief.

Although this one-year experiment lasted only a little while, Verbal already had three important insights.

First, developers should develop the products they want to use. In Verbal's words: "Don't think about solving other people's problems, it's enough to solve your own problems." Secondly, to develop products that people will use frequently, "like a short-lived product is not a good product." Finally, developers should ask themselves if their products are novel enough, unique enough, interesting enough, and able to deeply engage users and the media. If not, please continue to cheer.

With the test of the first four lightning network applications, Verbal thinks that it is very likely that he will be able to develop a killer app and wish him good luck.

Nothing is unachievable. I wish Verbal's development journey here is smooth and rewarding, and I hope that Verbal's experience will inspire you.

Wang Xinzhe, chief economist of the Ministry of Industry and Information Technology: Strengthening core technology research and development, promoting the integration of blockchain and real economy

UK Customs and Excise Department: cryptocurrency is not money or currency