Cross-border remittance fee, have you been slaughtered by the bank? The emergence of Bitcoin has made happiness come earlier.

Recently, the cryptocurrency enthusiast platform CryptoManiaks released data showing that compared with the international remittance fee of 30 to 40 US dollars, the remittance fee of $0.70 per bitcoin is simply low to dust (as if with humans returning to Yap Island) The era of the trade of stone coins). At present, the price of international remittance fees provided by mainstream banks is at $5, the higher ones are Wells Fargo ($45 each) and the lower ones are Bank of America ($30 each). 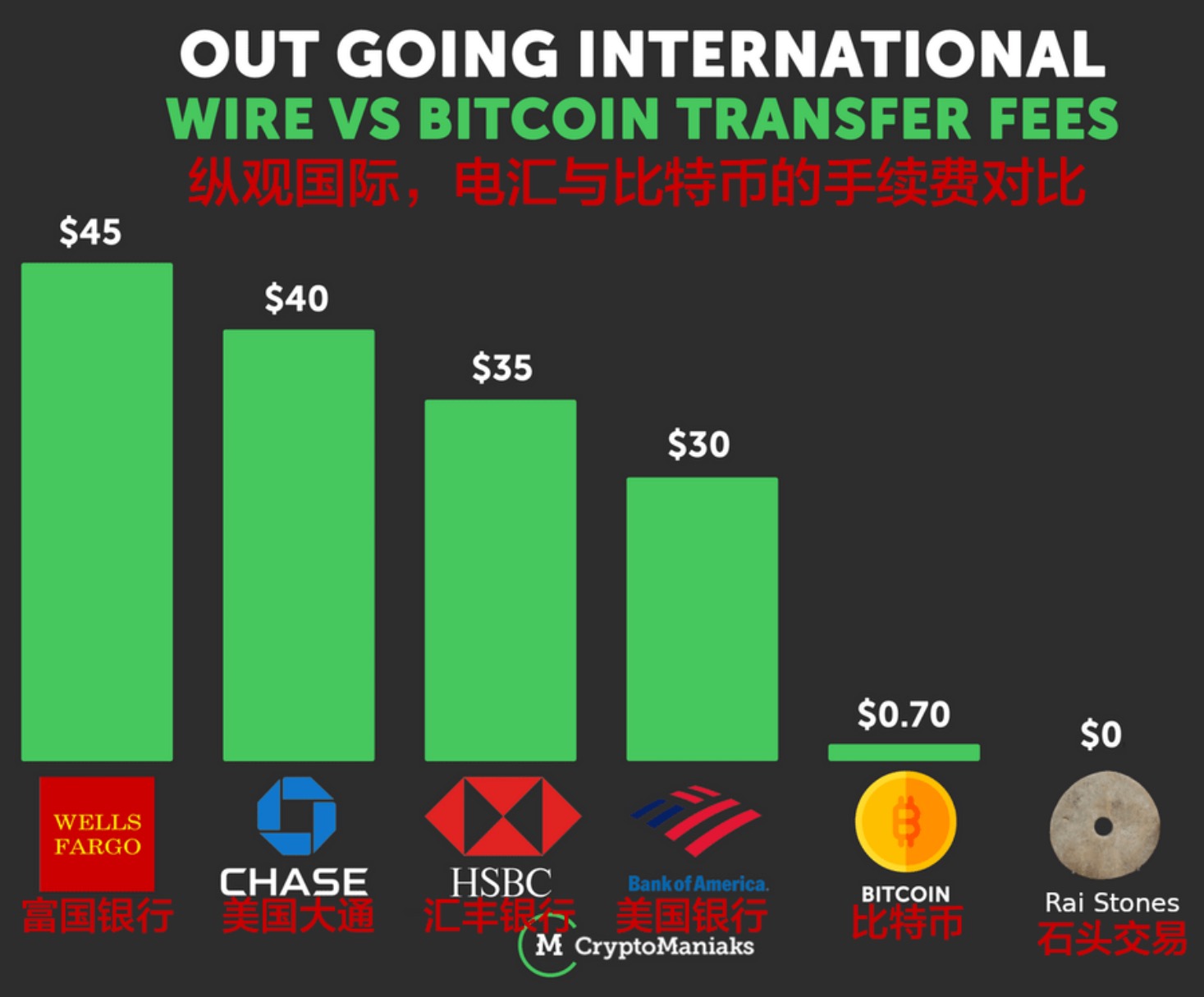 The Yap Island stone coin is one of the original currencies. Because of the lack of metal on the island, the stone acts as a trading medium (currency). Bitcoin and Yap Island have many similarities, including development, storage, negotiation, trading and review. For example, Yap Island's stone coins are publicly displayed in the community, while Bitcoin is available on the Internet for people to view its value; each of Yapo's stone coins can be traded by the population, while Bitcoin has electronic records for past use. . In general, the Yap Island stone coin and Bitcoin model are roughly the same, can be regarded as the pioneer of Bitcoin.

In addition to remittances, Bitcoin's transfer advantage is also very prominent. Take the big order on July 29 as an example. Bitcoin transaction tracking robot Whale Alert found that a bitcoin whale named "Unknown Owner 26" transferred $468.5 million worth of bitcoin for only $374.98 (about 0.0396 bitcoins). Bitcoin).

Cryptney currency analyst Rhythm said on July 29 that although this shift of scale often occurs in the currency, it is iconic that this transfer does not require personally identifiable information and does not require local or international The registration of financial regulatory agencies. In other words, this is a victory for the neutralization of the cryptocurrency. However, it is worth mentioning that although blockchain-based payment solutions are making progress, there are still major obstacles to large-scale adoption. One of the problems is that the blockchain network is transparent to its members, which means that in some cases anonymity is limited. To this end, some companies are experimenting with "tokenization", which uses a token of reference as a reference to replace sensitive data, thereby masking it. However, this approach is still in the early stages of development.

Another problem is that due to the lack of substitutability between crypto assets and fiat currencies, instant settlement is not currently possible. Bitcoin is inevitably subject to friction in the process of converting into French currency, especially considering the volatility of bitcoin prices. “Stable currency” is a solution whose value is linked to actual assets, but still requires a proxy bank for the final conversion.

Compared to the problems faced by Bitcoin remittances, Libra, backed by technology giant Facebook, has more value to look forward to. From the beginning of the white paper in June, Libra has put "reducing remittance costs" on the lips. As Libra's matching wallet, Calibra said on the official website that it wants users to send money by sending messages and photos, and said that it will complete a transfer transaction within a few seconds. According to the official website, users can convert local currency into Libra through Calibra, in order to increase the funds for the wallet, and convert it back when withdrawing money. When converting local currency to Libra or converting local currency from Libra, the app displays the exchange rate to get an accurate picture of the exchange rate.

David Marcus, the father of Libra, said in a question to the US Congress in July that Libra's remittance costs are close to zero cost, and Calibra will not consider profitability in recent years. This demonstrates Libra's determination to move toward faster, cheaper remittances. Within the Libra Association, payment giants such as Visa, MasterCard, and PayPal are already early supporters of the association.

In fact, some blockchain suppliers have also actively explored solutions in the payment field. Ripple connects banks and payment providers through its payment network, RippleNet, allowing them to pay in French or Ripple's own XRP tokens. The payment network is based on a private, non-distributed ledger that relies on a limited agent line ecosystem.

Financial institutions are also making progress. At the end of 2017, Australia, New Zealand Banking Group, JPMorgan Chase and Royal Bank of Canada jointly launched a cross-border payment service, the Inter-Bank Information Network (IIN). In July of this year, UnionBank, one of the Philippines' largest banks, has successfully completed a cross-border remittance pilot project based on blockchain technology (from the Philippines to Singapore).

CSI: Private bank development is getting better, and fintech represented by blockchain has become a breakthrough weapon

World Economic Forum White Paper: The level of blockchain interoperability is still immature for corporate use