Hyperinflation and economic sanctions have caused a small number of countries to switch from legal currency to bitcoin. Multinational currency is being swallowed up by bitcoin, surpassing or even replacing it. As the reputation of “Digital Gold” becomes louder and louder, Bitcoin is becoming a safe haven for many people.

"Bitcoin is now the 11th largest currency in the world. It is only driven by the grassroots movement on a 9-page white paper. (Let's let) millions of people choose one without an office, no CEO, no marketing. The bank of the department, this should definitely surprise you," said encryption analyst Rhythm on Twitter. 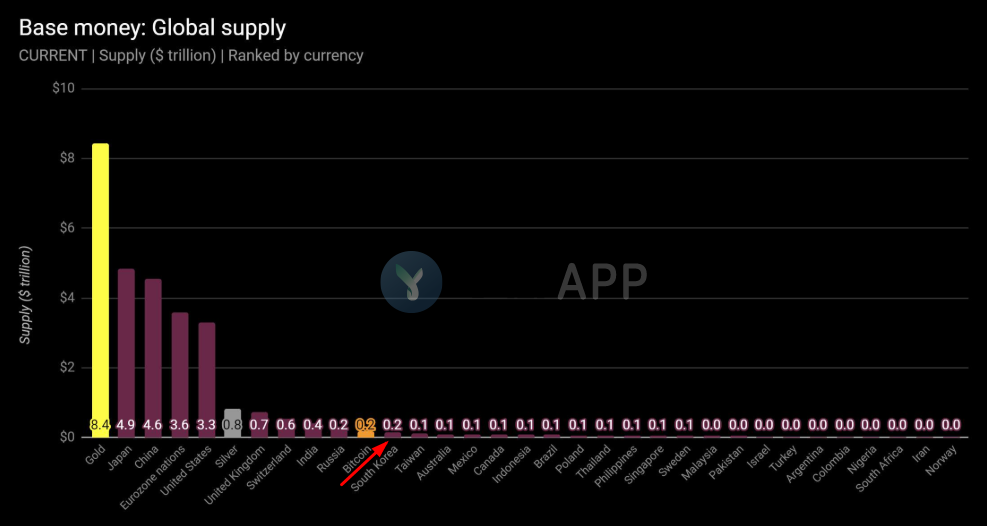 At present, the market value of Bitcoin has exceeded 200 billion US dollars, and its market value ratio continues to climb, its proportion has approached 70%, setting a new high since the end of March 2017.

Not only that, but the official currency of many small countries has lost public trust, sustained economic recession and hyperinflation, and they are pushing them to Bitcoin step by step. 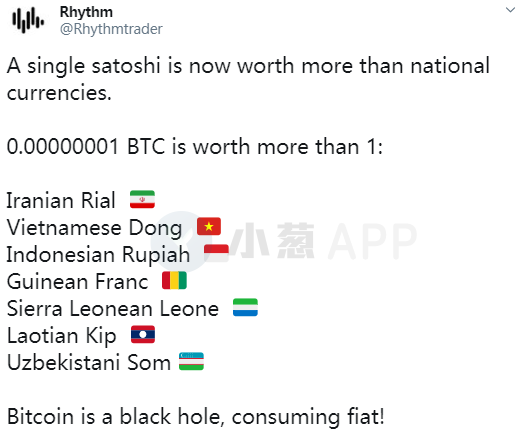 In addition, according to Babbitt's calculation, 1 Cong can exchange for 7.16 million Zimbabwe dollars, which can be exchanged for 5 Iranian rials, 2.75 VND, 1.7 rupiah, 1.545 Venezuela Bolivar, 1.08 Guinea francs.

Therefore, the value of one basic legal currency of Iran, Zimbabwe, Venezuela, Indonesia, Guinea, Vietnam, Laos, Sierra Leone and Uzbekistan is not worth the value of 1 Cong. In these countries, as long as you hold 1 bitcoin, you can become a so-called "millionaire" and "billionaire."

Small countries are increasingly accepting bitcoin, and Bitcoin is even replacing the official method currency of these countries. Zimbabwe and Venezuela are the most typical. They all face the most serious inflation. Their bitcoin trading volume is in Constantly set a new high.

Venezuela is one of the countries with the most inflation in the world today. According to the Financial Times, the data shows that Venezuela's 12-month inflation rate is as high as 44,548%.

At the same time, Venezuela is also the first "dual currency" system to implement sovereign currency and sovereign cryptocurrency.

In August last year, Venezuela was facing hyperinflation and international sanctions, the economy was rampant and the people were suffering. In order to alleviate inflation, President Maduro announced the introduction of the digital currency, Petro, into the official monetary system.

However, under the double blow of US sanctions and the decline of domestic oil production, the situation of oil coins is worrying. Its price is huge on many platforms. People don’t trust the oil coins, no matter how strong the government pushes.

Compared to the oil coin, it seems to the Venezuela people that cryptocurrencies such as bitcoin are more valuable. With President Trump freezing the assets of the Venezuelan government, Bitcoin trading volume has reached a new high in Venezuela.

At the end of July this year, Coin.dance data showed that the transaction volume of Venezuelan French currency Bolivar was close to 68 billion on the point-to-point bitcoin trading platform LocalBitcoins, breaking the record of the previous 58 billion Bolivar weekly trading volume and hitting a new high.

Zimbabwe, a small landlocked country in southern Africa, became independent from the British colonies in 1980. Thanks to developed agriculture and generous resources, Zimbabwe was once the richest country in Africa, and the 1 Zimbabwean dollar was able to exchange for $1.47.

However, due to land disputes, economic sanctions in the United States, etc., Zimbabwe’s economic situation began in 2000 and embarked on the road of super-currency.

In 2008, the central bank of Zimbabwe even issued the world's largest banknote with a face value of 10 billion. In that year, inflation in the country changed from 5,300 Zimbabwe dollars to 1 billion to 120 billion yuan to 1 US dollar. Due to hyperinflation, in 2009 Zimbabwe gave up its currency and used other countries' currencies. 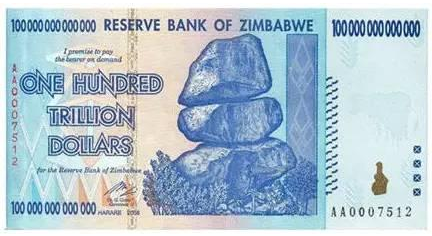 This year, Zimbabwe’s sovereign currency status was restored, and foreign currencies such as the British Pound, South African Rand, and US dollar were banned. Interestingly, Bitcoin has gradually become another major “currency” of Zimbabwe in addition to sovereign currency.

In July of this year, Bitcoinist reported that Zimbabwe’s peer-to-peer bitcoin transactions hit a new high after the foreign currency was banned. Currently, Zimbabwe is one of the most commercially active markets based on cryptocurrency, and Zimbabweans prefer to use this digital asset as a stable means of value storage rather than the Zimbabwean dollar.

Moreover, Zimbabwe’s hyperinflation persists, and with the ongoing drought, millions of people in this country face famine. This further forces local residents to turn to Bitcoin, which for some people is more conducive to protecting their savings from bank failures, inflation and even political turmoil.

Bitcoin is not only becoming a “substitute currency” for small countries, but as a digital gold, it is increasingly becoming a safe haven when the stock market crashes.

On August 11th, local time, the results of the primaries of the Argentine presidential election were released. The news that the local currency peso fell more than 30% against the dollar in the day was a record low, which caused global attention. 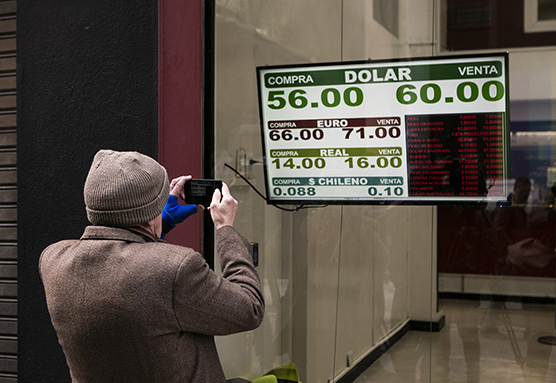 With the stock market crash, Argentina's bitcoin is experiencing a premium, which may indicate that the Argentine people are turning to the bitcoin market.

According to Trustnodes, data shows that in Argentina, bitcoin prices are slightly higher than global prices, with a premium of about $300, up from about $100 in May.

Although the former writer of Bloomberg said that the premium is not driven by high demand. This is just a low liquidity transaction.

However, from April to May this year, the Argentine peso continued to depreciate. When the Argentine Central Bank announced three interest rate hikes, the enthusiasm of the Argentine people to buy Bitcoin ushered in a wave. This is obviously associated with the peso value.

According to the May data of the point-to-point bitcoin trading platform LocalBitcoins, the bitcoin transaction volume from Argentina has the highest innovation history.

When Libra was born, it would replace the idea of ​​a small country.

Huang Yiping, director of the Center for Digital Finance Research at Peking University, also believes that if Libra is really popular in the international monetary system, perhaps the currencies of many small countries will not exist because there is no need to use these less stable and less stable currencies. .

However, for the time being, small countries prefer Bitcoin.

Coindesk reports that one of Latin America's largest banking service providers, Bantotal, is ready to support cross-border payments in the Bitcoin blockchain. It is reported that Bantotal provides services to more than 60 financial institutions in 14 different countries and about 20 million people. This suggests that more than 60 Latin American banks will use bitcoin for cross-border payments.

In addition, some countries have allowed paying in Bitcoin, and paying in cryptocurrency is no longer a tax evasion.

New Zealand is legitimizing workers in the form of bitcoin as a form of wage collection. On August 12th, the New Zealand tax authorities have ruled that cryptocurrency income is legal. New Zealand allows monthly and weekly salaries to be paid in cryptocurrencies such as Bitcoin from September 1. So far, New Zealand has become the first country to legally support companies paying employees in cryptocurrency. 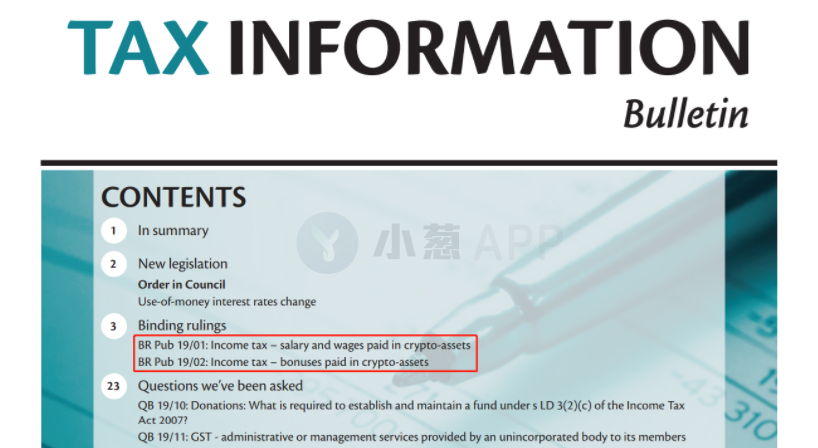 Although it is said that Libra may subvert the currency, before the birth of Libra, Bitcoin has already completed what people have imagined.

In summary, Bitcoin is now the real Libra.

The data shows that the total number of blockchains mentioned in the blockchain concept stocks in 2019 is almost the same as last year's semi-annual report.

Wany Summit 丨Lucy Gazmararian: It is expected that the reverse merger activity of Q4 blockchain company will increase in 2019