Last night, according to the HOLD market, Bitcoin fell for a short time. It fell below $10,000 at 7:00 this morning and fell more than 5% at 24h. It was the first time in half a month that it fell below the $10,000 mark and is currently fluctuating around $10,100. Prior to this, Bitcoin continued to move sideways, narrowly arranged in the 11300-11600 US dollar range, it is difficult to break through the upper resistance of 12,000 US dollars. 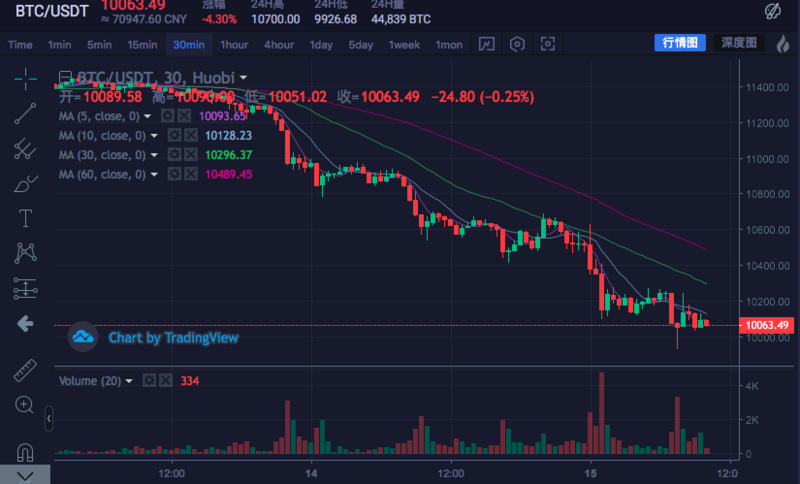 In addition, according to Coinmarketcap data, the bitcoin fell and led the 100-dollar drop, among the top 100 currencies in the market value, 93 coins fell. Among the mainstream currencies, Tron and Atom all fell more than 10% in 24 hours, followed by XRP, ETH, BCH, EOS, and BSV, which fell more than 9% in 24 hours.

Today's panic turned from panic to extreme panic, reaching 11, which is close to the lowest point of the year 9 (the period from the lowest point of BTC in November-December last year). As of 8:00 today, in the OKEx Bitcoin contract elite account, the long-term average position ratio was 31.18%, and the short-term average position ratio was 12.34%. The long position continued to lead the short position, and the gap increased.

On the news front, statistics show that bitcoin wealth distribution is out of balance, 2.8% of wallet addresses control up to 95% of bitcoin supply; recently, the US Treasury Department's Office of Foreign Assets Control (OFAC) suggests that the regulatory encryption industry will be theirs First and foremost, they may take active steps to purify the industry. The currency KYC data was spread by hackers twice. Yesterday, the media exposed the hacker and coin security negotiation records.

Most of the trade war factors

In the August 7th report, the Institute of Money Security pointed out that empirical data shows that Bitcoin is sensitive to macro-risk events related to international trade, while economic policy or prospects are less sensitive to uncertainty. From August 1st, Trump unexpectedly announced a tax increase, and then the renminbi quickly "breaking seven", resulting in both gold and bitcoin both rose sharply. However, this week, the Trump administration announced that it would postpone tax increases on half of the original Chinese products (mainly electronic products, toys, etc.), which is considered by the market to be a concession between the two countries. There has also been a sharp rebound, which has become an important trigger for Bitcoin's decline.

OK Research analyst K Ye further elaborated on the impact of the news: Sino-US trade friction has eased, the US originally planned to postpone tariffs on China's 300 billion imported goods on September 1, and the scope of goods collected has declined. As a result, the market's potential risks have fallen, risk aversion has cooled, and safe-haven assets such as gold and yen have fallen sharply. The Dow, Nasdaq and Shanghai Stock Exchange have all seen significant gains. The strong rise of this round of bitcoin, and ultimately the risk aversion, the promotion of safe-haven funds, after the typhoon, calm, will form a low tide.

Yesterday the US Securities Regulatory Commission again postponed the approval of the Bitcoin ETF listing application. The door leading to the entry of cryptocurrency into the traditional financial sector has been closed, the forward capital inflows are expected to decline, and the digital currency such as BTC, in the context of sluggish market sentiment, once again impacts, making ETH, EOS, LTC and other digital currency assets full. Make up.

Although later, the market sent news that the US debt 10-year and 2-year yields were upside down, once again suggesting that the economic recession and the crisis are approaching, but soon the Fed officials clarified: "The yield of this bond is upside down and cannot be As a signal of economic downturn, there are other reasons for hanging upside down."

OK Research analyst De Yun also believes that this wave of decline, with the US announced yesterday that it will postpone the 10% tariff on some Chinese goods, and then the US stock market surge. If the heat of trade war continues to decline, the concept of speculation as a safe-haven asset will no longer exist, and the fall is also a natural thing. Compared to the stock market, the plate of the currency market is still too small, and it is easy to be affected by this change.

According to Coins analyst Jins, the decline of BTC is a correction of its own price. From BTC's acceleration from around 11800 USD, there is no effective rebound performance. It can be seen that there are very few investors at low prices, indicating that there are very few investors. An unexpected drop in value may cause more holders to suffer damage.

However, this decline is in stark contrast to the recent rise in the price of gold, which is in sync with the recent rise in the 3% Dow Jones index on the other side of the ocean. He said that BTC's hedging attributes have greater uncertainty. And if the BTC itself is a risky asset, then its high downside risk is bound to increase; in addition, from the half of the month starting July 29, the change in the number of currency holdings is very small. This indicates that the number of new investors is insufficient, which will affect the BTC's subsequent price performance.

The Institute of Currency Security has different views: the temporary decoupling of Bitcoin's correlation with traditional safe-haven assets is understandable. The empirical evidence shows that Bitcoin has no hedging effect on the traditional economic recession risk, and even closer to a procyclical commodity.

For the market outlook, the madman from the media digital currency trend is dominated by bearish sentiment. He said that from the 4 hour chart and the daily line, the short-term trend continues, so the trend market is still dominated by decline. There may be a small rebound in the short-term (tonight to tomorrow), and it will still fall back in the medium term.

Deyun also believes that it is not the time to cut the bottom, and the long-term downtrend is still strong.

K Ye said that in the market outlook, we still need to pay attention to Sino-US trade frictions and the global economic trend, and predict whether the crisis will reignite. Sino-US trade friction is currently easing, not terminating. Historically, trade frictions must be repeated, erupting—————– If the trade friction between China and the United States is upgraded again in the future, the risk aversion will inevitably rise again. Assets with certain safe-haven properties such as gold and bitcoin will once again be sought after by funds. The price trend of digital currency assets may once again form a pattern of differentiation.

Based on the analysis of the OKEx Bitcoin quarterly contract quotation data, the important support of the future BTC is around 9130USD, which is also the long-short boundary line of the future medium-term trend. BTC prices are above this, and the long-term trend remains bullish.

At the same time, according to Cointelegraph, Bitcoin began a premium transaction in Hong Kong and Argentina. According to data from the P2P Bitcoin exchange LocalBitcoins, the price paid by Hong Kong traders for each bitcoin on August 14 is about $300 higher than elsewhere, which is equivalent to a premium of around 2%; Argentina's local inflation rate is high. As a result, the local Bitcoin transaction price has a premium, which is nearly $1,000 higher than other places.

The Coin Research Institute believes that the bear market will fall too fast and there will be a premium, not because the buying volume has increased. The premium is very much like the reason for falling too fast.

Grayscale CEO: In the next 25 years, trillions of dollars of wealth may flow into Bitcoin