If you have a pet to play, you can make money. In 7 days, the profit is 28%. You are using the blockchain technology on the tall. Are you tempted by such a game? If you are tempted, you will be fooled.

Recently, Pudong network police official WeChat issued a notice that a platform named "Bit Pig" was investigated by the police.

In this case, the victim, Mr. Dong from Changzhou, Jiangsu Province, said that he was drawn into an investment group. Every day, a teacher lectured on the virtual pet “Bit Pig” using “blockchain” technology, claiming that the pig was acquired by the platform 15 days later. There is a 28% return. After the small profit, Mr. Dong transferred 100,000 yuan to adopt it again. Until the platform could not be landed at the end of July, Mr. Dong discovered that he was cheated. 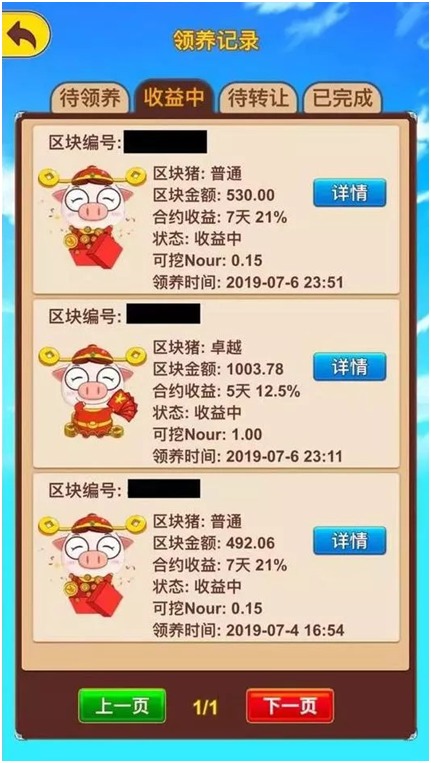 "Bit Pig" collapsed on July 10th. At a bit pig forum, a user who participated in the investment of "Bit Pig" at the end of June shared his painful investment experience on July 14. The investor stated that he was known by the friend on June 15th as "Bit Pig". At that time, he was worried about where the money came from, so he never entered the market. After diving for half a month in each "Bit Pig" group, I felt that I understood it on June 30 and I entered the field to grab the pig. I didn't dare to grab big pigs at the beginning. They were all "excellent" and "myth" (the two categories of "bit pig"). At that time, I robbed two games, and I won two games. I was suspicious at the time, but I did not expect such a big problem. So on July 1st, he entered the scene and grabbed two "myths" and cast a million. Originally, on July 2, I received a bit of news from other groups. I felt that the "bit pig" was too easy, but the money had already been cast, and it was late. Until July 6th hacker attack. On July 8th, the platform replied to the morning. His pig successfully sold one. He thought that it could run stably, and made additional investment. All the 18,000 funds came into the market. At that time, many people said that they were stable and stable! He feels that he also feels that when he sees the money he has turned back, he will not care. "Today's 14th, it has been suspended for 3 or 4 days. I don't know how the platform is going to be planned. I will open it tomorrow. Today's announcement has not yet come out. I am worried that the operation team will not care about us. I hope this pig can live. When you get alive, you will sit on the second big market. We will not give up until we live, and we hope that the running team will not give up."

When investors are still hoping for a stable platform, as scheduled, on the other hand, it is indeed a trader who plans to harvest the last leek. The outbound chat records show that the “Bit Pig” team kept some “heads” in order to cut the last wave of leeks, and promised to give some benefits. All investors were behind the scenes to play with the applause.

In response to the “Bit Pig” case, the Pudong network police warned that “through the police investigation, most of the current investment projects in the name of new concepts such as blockchain are fraudulent types of funds, regardless of the type of funds. For the purpose of harvesting leeks, if you can't stop the temptation, you will become a member of the harvest."

"Many people, like the victims in the case, tasted a little bit of sweetness and increased their investment. In the end, the project collapsed and caused the profit to be lost. Or the old saying, what you are looking at is the interest of others, and what people are looking at is Your principal!"

Every reporter Liu Yongsheng, every edited by Lu Jiu'an

Be wary: Encrypted scams are…

Fire Coin China CEO: The market is more concerned about the application of blockchain than TPS