Do you think your bitcoin is not enough?

For most people who buy Bitcoin because they believe that Bitcoin will become the next generation of value benchmarks, the hardest hard currency and the gold of the digital age, they are not worried about the skyrocketing and plunging of Bitcoin, but a simple Things – what can be done with less bitcoin.

I saw a data two days ago, and the top 2% of Bitcoin accounted for more than 80% of Bitcoin. 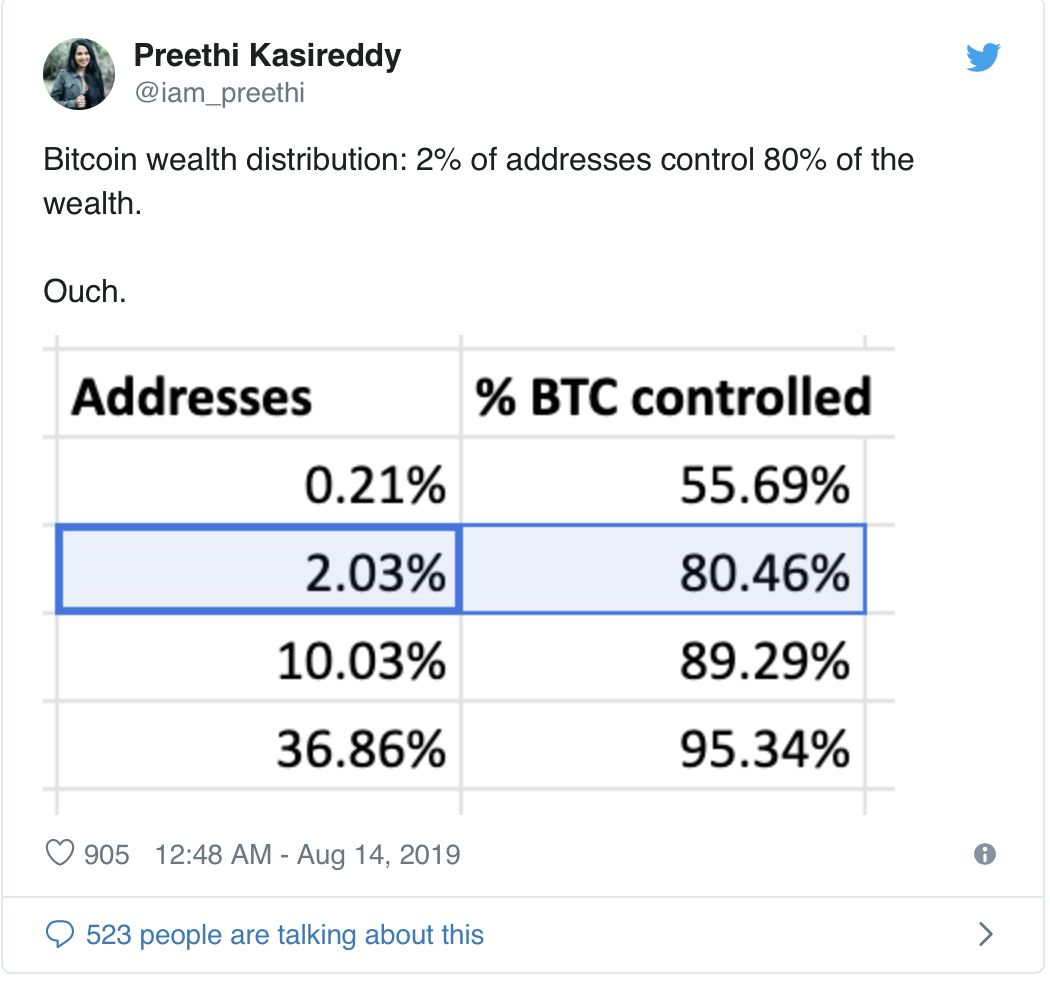 When drawing the curve, the analyst took into account some factors and eliminated some possible interference factors as much as possible, so the adjusted curve is shown in the figure: 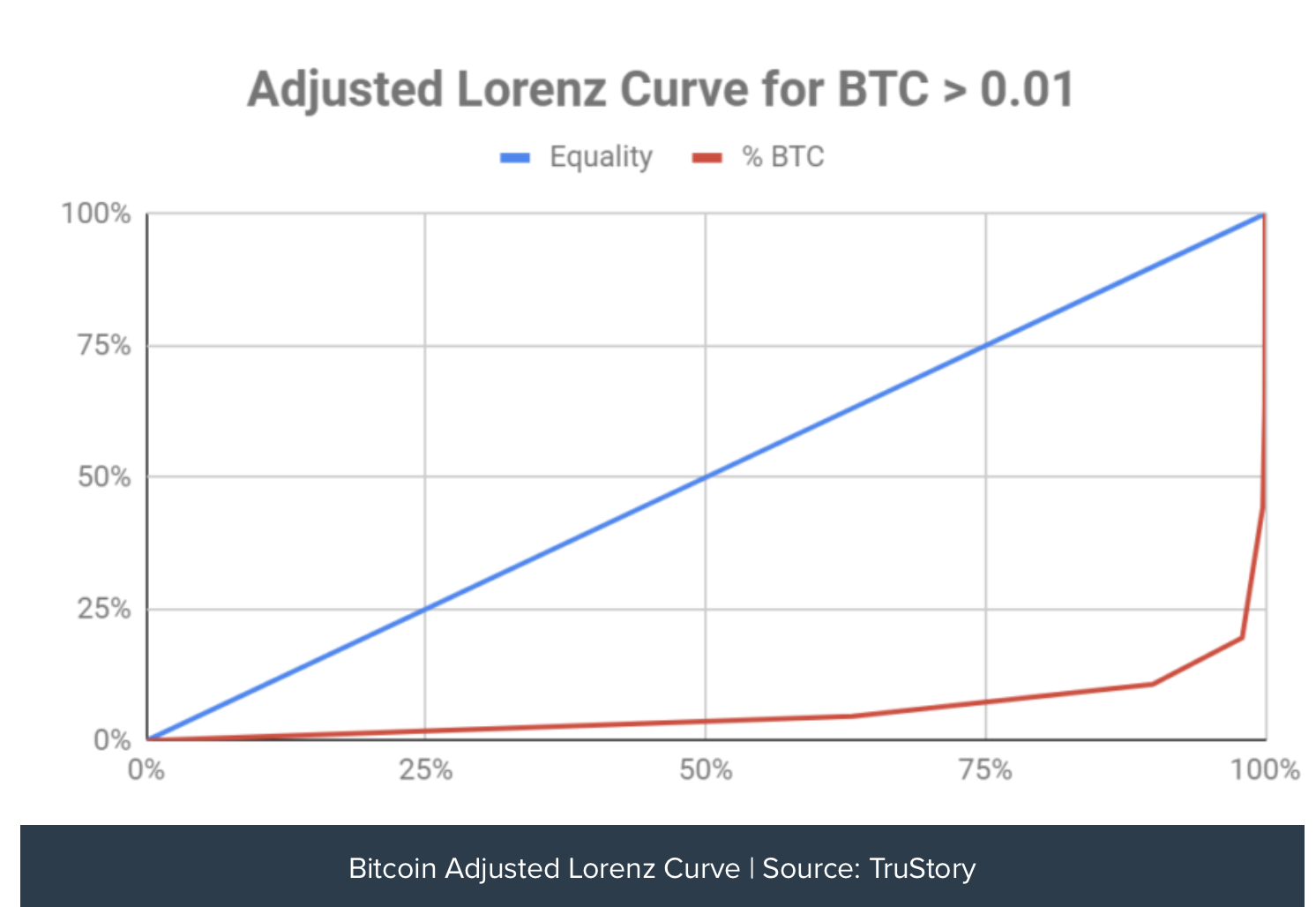 Even if you don't understand the meaning behind this curve, you can get the conclusion that "this seems unreasonable."

Although Bitcoin does not intend to help resolve the polarization between the rich and the poor, such a large gap is indeed beyond the expectations of many people. In the real world, although there is always a saying of the 28th law, the top 20% of people occupy 80% of the world's wealth. So when you see that 80% of Bitcoin is actually occupied by 2% of the address, you will laugh at it: Is Bitcoin not more rich and rich than the traditional world?

But in fact, the BBC survey shows that 1% of the rich in the real world hold 82% of the wealth:

And in fact, at the top of the pyramid, wealth itself has no meaning. "Resources" is the advantage that they really crush ordinary people. In capitalism, it may be called "production materials." The rich not only mastered the wealth, but also mastered the means of production and various resources. Therefore, the gap between the rich and the poor in the real world is far greater than the gap visible to everyone.

Just like giving you a billion now, you can't use it effectively, and you can make a bigger return, because ordinary people not only have no wealth, but also do not have the means of production and resources. And the people at the top of the pyramid, even if they don't have money, can make a lot of money with a face. Of course, I am talking about people at the top of the pyramid, not for upstarts who have nothing but money.

But this is not too much to talk about, after all, it is also ordinary people.

When it comes back to Bitcoin, is there a big gap between rich and poor in Bitcoin? Big and big, but this is also the future trend. Why is the address of Bitcoin more and more concentrated? I believe that people who have passed the last round of bear market are deeply impressed. In the long decline of the bear market, retail investors have barely added positions, and everyone who has been arbitrarily adding money to the Wall Street institutions has been numb. Especially in the period when Bitcoin was in the position of 3,000-5,000 US dollars, almost all ordinary holders were selling. I have not heard of any newcomers coming in or who are still garnering?

Even many practitioners have to sell a lot of coins at a very low price, in order to pay wages, in order to survive. When I look back this year, I regret all the time, but I can only laugh a little, no way.

In fact, because of their own strength, big capital and large institutions have relatively strong resistance to large fluctuations in cycle and price. Therefore, bitcoin will eventually be collected in large institutions, which is also a trend that cannot be changed.

For ordinary people, such as seeing you here, do you think your bitcoin is still too little? I believe it must be, including I also feel that my bitcoin is too little. But in fact, there is no need to worry too much. After all, as long as you have 1 bitcoin, you have exceeded so many people:

Moreover, holding Bitcoin itself is already leading most people in the world.

Cardano Gold is suspected of a scam, the Cardano Foundation suggests a risk