After Huawei and Apple, Samsung added Bitcoin to its Keystore.

On August 13, South Korean multinational Samsung (Samsung) released the company's new blockchain KeystoreSDK for developers, the latest version of which supports Bitcoin (BTC). This version of the previous Keystore only supports the ETH and ERC20 standards. 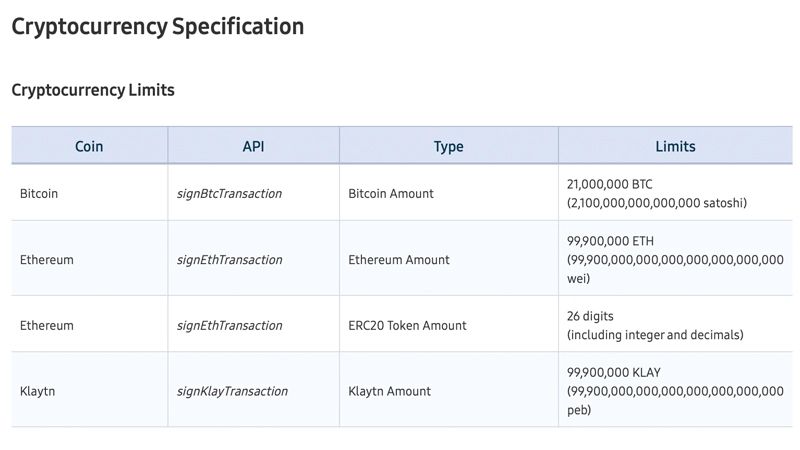 Samsung blockchain Keystore specifications. Do you know that Bitcoin.com also has blockchain development tools and SDKs for the Bitcoin cash network? This includes the Bitbox SDK, Badger SDK, SLP support, CashScript, and more. Visit developer.bitcoin.com today.
Software engineers using the Samsung Keystore SDK can take advantage of many of the features commonly used in applications such as non-custom Lite wallets. For example, Keystore will generate a key pair (public and private) of cryptocurrency in the device itself, while storing the key in a secure environment within the mobile device.
“Samsung does not rely on other networks or third parties to generate these keys,” the keystore 1.1.0 SDK specification shows. All mnemonics are compatible with the BIP-39 standard, allowing users to deploy recovery phrases on another device when the phone is lost or stolen. However, the company explained that sending signed transactions is not within Samsung's scope, and that you want to send a signed transaction depends on your own node or public node.

As BTC was added to the Samsung Keystore, the cryptocurrency specification also opened the door for similar networks such as Bitcoin Cash (BCH). Bitcoin Cash (BCH) also uses transaction types such as P2PKH and P2PK and has an upper limit of 21,000,000 BCH or 2,100,000,000,000,000 satoshis. In the Keystore specification, Samsung pointed out that "we plan to support more cryptocurrencies and expand the support area in the near future." Those who want to test the Keystore feature can't simply download the app from the Galaxy store because of Samsung's blockchain SDK. Pre-installed on the selected device. Software developers can use the remote test lab on the Samsung Developer website to test the Keystore application.

Apple released iOS 13Cryptokit last June
Posts on social media and Reddit forums show that encryption advocates are grateful to Samsung for adding BTC to Keystore. Currently, 17 cryptocurrency-related apps are available for use with select Samsung phones and Keystore. This includes decentralized applications (dapps) such as Enjin, Cryptokitties, Coinduck and Cosmee. The Samsung dapp store also recently acquired two new dapps, Mars and Jupiter, developed by Korean technology company Trustverse.
There are rumors that Samsung payments will eventually be synchronized with the Keystore wallet so that people can use digital assets to pay for goods and services. Samsung's recent support for BTC stems from the iOS 13 Cryptokit released by its rival Apple. Cryptokit from Apple gives speculators reason to believe that the Cupertino technology giant will release its own internal encryption wallet system. Similar to Samsung's Keystore SDK, Apple Cryptokit provides three specific properties:
1. Calculate and compare the cryptographic security summary.
2. Create and evaluate digital signatures using public key cryptography and perform key exchanges. In addition to using keys stored in memory, you can use private keys stored in and managed by Secure Enclave.
3. Generate symmetric keys and use them in operations such as message authentication and encryption.
Apple and Samsung entered the cryptocurrency industry by releasing software development kits, indicating that handsets with blockchain capabilities and cryptocurrency solutions will continue to exist. Mobile phone giants are leading the way in sales, and adding cryptocurrency features may give them an edge over profitable technology and people who are proficient in encryption.

In May 2018, Huawei added a pre-installed BTC.com wallet to the company's mobile phone.
In May 2018, Huawei defeated Samsung and Apple by selling mobile phones pre-installed with BTC.COM's cryptocurrency wallet. Even OPPO is close behind, providing transactions in the system that help encrypt the money node operator's peer-to-peer network to verify poor Internet service.

Oppos Mesh Talk allows transactions to be sent without Wifi, cellular data and Bluetooth.
According to reports, Oppo's Mesh Talk system allows handsets to exchange blockchain key data without using Wifi, Bluetooth or cellular data within three kilometers. With all of the blockchain developments in Huawei, Samsung, Apple and Oppo phones, we can safely assume that mobile giants are well aware that cryptocurrencies will continue to exist.

The Ukrainian government plans to establish cryptocurrency tax rules and plans to legalize mining in two to three years.

Staking has locked in a market value of 7 billion US dollars, which is the only way to mine "popularity"