In the past two or three days, the XRP news has been noisy. Although it has recovered some of the declines, it still cannot escape the worst performing mainstream currency this year.

On weekends when currencies are not strong, XRP's recovery of some of the declines led the market. In the past two or three days, San Francisco-based financial technology company Ripple and XRP news are noisy:

The impact of XRP investors on Ripple lawsuits has been exaggerated, and Coinbase XRP majors are still buying XRP. Reports show that XRP is far more speculative than other mainstream currencies, and analysts believe XRP is oversold…

What happened to XRP after the weekend? Onion analysts wrote on Monday morning that the current XRP market is in a period of rebounding momentum, but did not really get out of the idling reversal signal, at least after the price confirmed to recover 0.30 and stabilized above the position. It may be possible to start looking for a short chance; if the resistance of 0.30 is frustrated or re-entered by 0.26, the target of the short-track can at least look back to the previous low of 0.23; if the support is further broken, the target can be further seen. 0.20 near the integer. 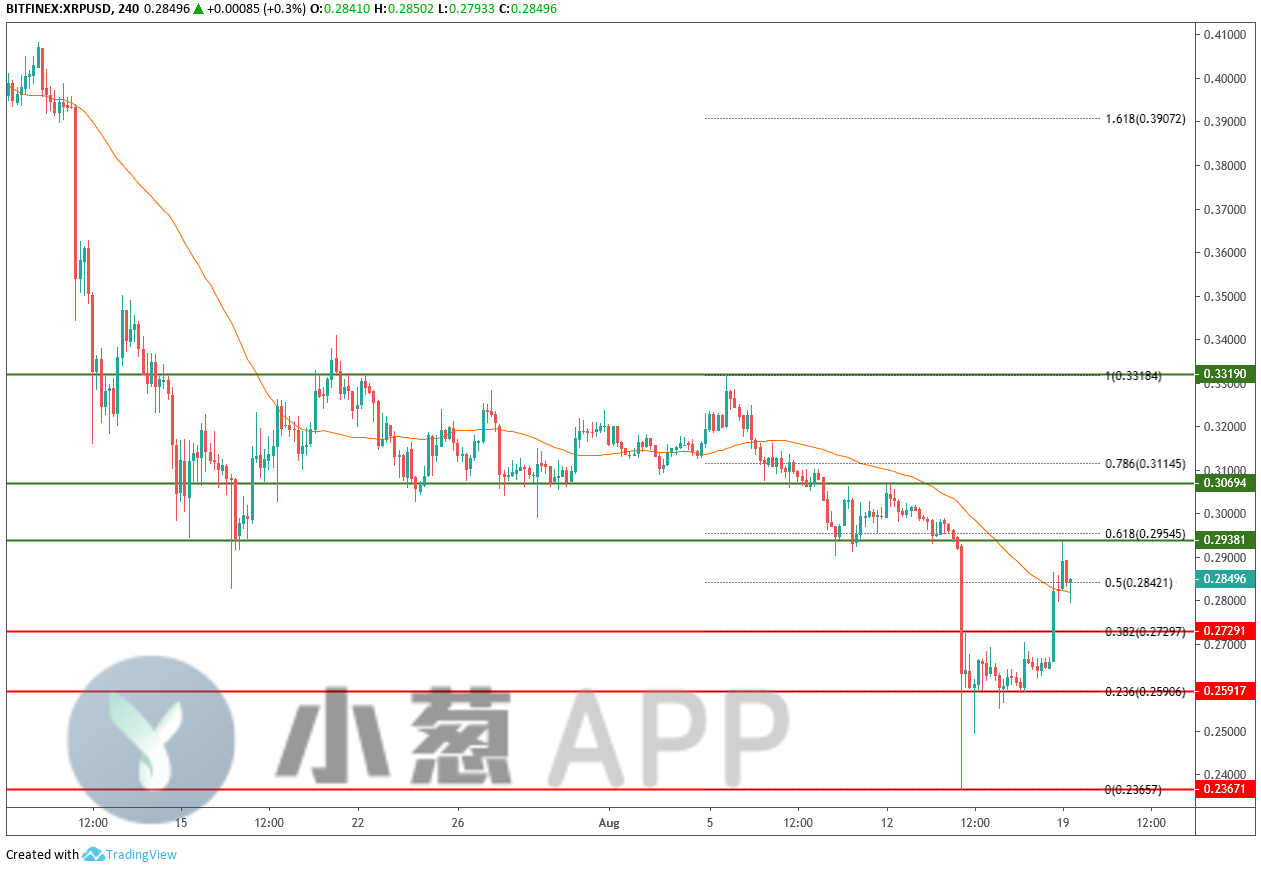 What happened to the XRP weekend?

The increase in XRP mainly occurred on Sunday (August 18). CoinMarketCap quotes show that during the weekend (17th-18th), XRP closed at $0.29, up 9%, leading the other currencies. However, the short-term rebound of the XRP weekend is only to return to the vicinity of the lower edge of the platform where the weak shock occurred in the past month or so, and it has not really achieved a re-collection of the 0.30 integer.

On the news side, XRP has both “new news” and “new data support”. Let's first look at the continuation of the “XRP Investor Ripple Litigation” incident. Blockchain media The Block said on weekends that the impact of XRP investors on Ripple lawsuits has been exaggerated by netizens. The article stated that

1. The plaintiff has indicated in the previous lawsuit that the XRP is an unregistered security, so the plaintiff did not file any new allegations;

2. The SEC framework has no precedent value, and the argument is not that important. The current question for the court is whether the sale of XRP meets the Howey test;

4. The best way to consider this is to conduct a sanity check.

On August 5th, XRP investors filed a new lawsuit against Ripple, which proved that Ripple illegally sold unregistered securities based on the relevant content of the US Securities and Exchange Commission's digital asset framework.

At the same time, according to the Howey test, XRP involves investments and has reasonable profit expectations and should be considered securities. Ripple's corporate media head Tom Channick has previously denied this view. However, if XRP is ultimately identified as a security, a high probability will be banned from sales and Ripple will face a fine.

In addition to news of litigation disputes, the XRP weekend was mentioned by two data.

First, 83% of Coinbase XRP customers are still buying. On Saturday, Coinbase data showed that 83% of XRP holders continued to purchase XRP with high volatility in the context of market volatility and greed index volatility in the near term. The message is that most Twitter users believe that the actual owner of the XRP is in Hodl mode and is not ready to sell. Alternative.me experts say that the three-month bearish trend line and indicators show that XRP will fall further, but there is still the possibility of reversal.

Second, XRP's hype is much higher than other mainstream currencies. On Saturday, analyst firm The Tie.io released data that the ratio of speculation in the top 5 currencies is relatively consistent, but the XRP's speculation rate is 4.07, much higher than other currencies (even if XRPCommunity, XRPTheStandard has been ignored) Labels such as XRPArmy; if included, the indicator value is as high as 6.66). In addition, XRP ranks 29th and Bitcoin ranks 32th among all currencies. 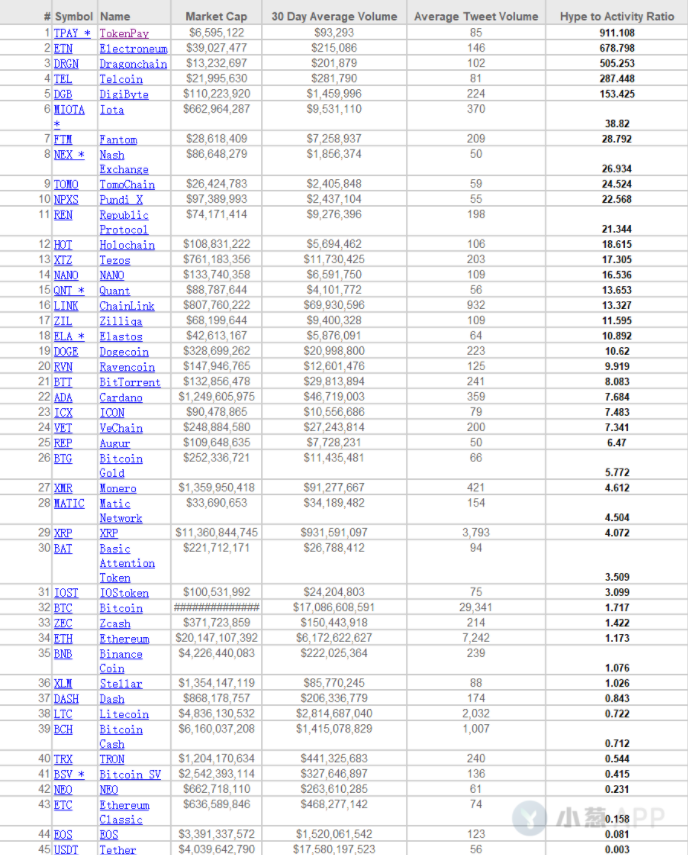 The Tie.io created a Hype-to Activity Ratio that measures the amount of tweets per $1 million in transactions per currency. Just like manipulating trading volume, many cryptocurrencies are also manipulated on Twitter by a large number of robot accounts and false followers. On the weekend, analysts also focused on XRP. On August 16, Naeem Aslam, chief market analyst at Think Markets, recently announced that he thinks XRP is oversold and buying at current prices may be a good idea. 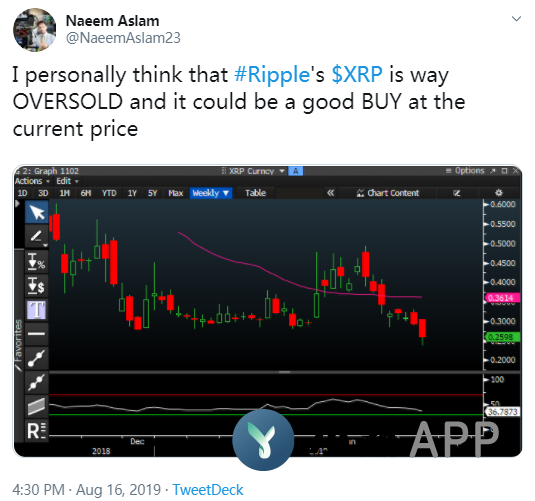 Aslam previously said that the XRP market trend is currently below the 200-week moving average and the RSI (Relative Strength Index) has fallen below 37 points. These developments suggest that the bear market for XRP may have ended and paved the way for a potential bull market.

XRP has a lot of bad things this year…

On the currency price, cryptocurrency analyst Peter Brandt said on Twitter that once XRP appears in the $0.2400 area, Ripple's "success" moment will come. Although Brandt thinks Ripple is a "managed" company, he insists that Ripple manipulates the price of XRP. 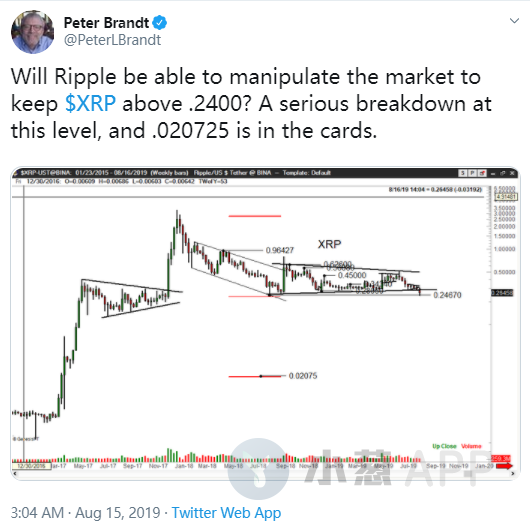 According to the statistics of the onion, XRP did not perform well this year. As the market value of the currency circle is second only to Bitcoin and Ethereum's third largest currency, XRP prices have fallen by 21% this year.

In the face of half-dead currency prices, and not catching up with the hot spots of the currency, the Ripple community finally couldn't hold it at the beginning of this month. In the online petition, it was written: Rescue the price, Ripple should destroy half of the XRP. The content of the petition is essentially intended to allow XRP to quickly enter the deflation mechanism to enhance its value.

The market can not keep up with the mainstream currency forces, and there are also turmoil outside the court. On January 24 this year, blockchain research firm Messari released a report saying that the market value of XRP may be overestimated by $6.1 billion. After the report was issued, Ryan Selkis, co-founder of Messari CEO and blockchain media Coindesk, said that she received a threat call from anonymity.