Responsible for the MLM team behind the fun step, only one rights defense consensus

The fun step fund, which is said to be 50 million users, has already been suspended. The carnival of yesterday is about to turn into a bubble.

The fate of the fund disk has always ended with the fate of the collapse, and may be postponed, but the result is already doomed, and the success may be the next game of rights defense farce.

Once the consensus has been formed, it is the moment when the law enforcement officers give the pyramid scheme a fatal blow behind the fun step. The relevant person in charge, spit out illegal income, and also criminalize the crime according to the amount involved.

I would like to advise all participants to get out quickly. (may be difficult to pull out now)

Interesting Steps is an app that focuses on a series of hot concepts such as “Great Health” + “Blockchain” + “Sharing Economy”.

According to the information released by the public, it uses technology to advocate the national movement. In order to solve the problem of no stimulation and no motivation in the current public movement, it uses the “blockchain technology” to issue 1 billion candy, and rewards participants according to the number of steps in the movement. . (In fact, tens of dollars can cost 1 billion candy to be issued)

If there are so many users in the market, At least there should be a decent official website, and the search finds that its official website is only a registration interface, and no market information is published.

In the interpretation of the blockchain technology, the relevant data shows that the fun step will generate different and unique motion information for different users at different time and place (indicating that the blockchain cannot be modified), and generate these unique information into blocks. Use the workload consensus mechanism (walking) to reward the fun step candy by calculating the node movement (step counting). The blockchain technology needed behind such a large user base, only Chongqing Funbu Network Technology supported the predecessor of Hunan Funstep Network Technology, its registration date is June 2018, just in line with the date of the fun step.

The specific company strength is not known, but from the information displayed by the parties, its background and its own user volume are difficult to adapt, mainly reflected in security issues such as privacy information and funds.

If the blockchain technology is used as an interesting step, the ABCD 4 levels, even the D level, are not counted, but if the fund operation is scored, it belongs to the A++ level.

We can see that the propaganda about the interest step in the market is mostly accompanied by the words “walking to make money”, “rich fortune” and “Ma Yun said”. The profiteering + successful people only speak a few words to brainwash the under-resourced groups.

In the fun-step system, you can earn candy by walking (in fact, it is the same with hand shake), candy can be exchanged for RMB, this redemption process is two-way, and you can't define it with simple points. Clearly stipulate that points cannot be exchanged for two-way currency!

Interesting steps seem to be the core of sports, in fact, candy. In this profit-seeking system, only a certain amount of candy can make up its own income.

The amount of candy is not freely available, but some conditions are attached, and the principle behind these conditions is precisely the mode of funding!

The number of sweets rewarded in each step is certain, and the number of task steps is irrelevant, because you can walk or shake, or through other skills, the most important thing is the activity, the activity is divided into basically active Degree and bonus activity.

The basic activity is used to distinguish between RMB players and non-RMB players . It can also be said to be a grade. The way to use the fun is through scrolls, from beginner to expert level. These coupons need candy to be exchanged. Players can directly purchase candy to redeem the corresponding reels. The higher the reel on the basis of this, the higher the basic activity, and the more candy you get after completing the mission.

According to the previous version (currently just changed), you can understand this: invest 10 candy, gain 12 candy, take 45 days, profit 20%; invest 100 candy, gain 119 candy, 45 days profit 19%… … This is the fund-raising in disguise, far higher than the P2P promise of the previous thunder.

For non-RMB players, it is a step-by-step upgrade, completing tasks, and getting candy. Fun Steps provides a trial reel for this group of people, and the candy can be exchanged for a higher level. For the withdrawal of the withdrawal, there is no loss for this part of the people, but the gains are minimal!

To improve the activity of addition, it is necessary to develop the offline line. There are two types of direct sales mode, one is the development of multi-level offline marketing mode. In short, more people can increase their activity and volume. A certain limit has been reached and there is an additional candy transaction fee redemption and so on!

In addition, the cost of redeeming the candy is also very high. If the contribution value is not increased by the development of the offline line, the handling fee can reach 50%. To some extent, the MLM has to be done to maximize the profit. Promotion.

Where does the money come from?

Both RMB players and non-RMB players have high profit feedback as long as they increase their activity, but where does the profit come from?

Through the above combing process, we found that only RMB players are willing to buy candy as an expense to maintain the system's phased operation. If no one buys a candy redemption reel? 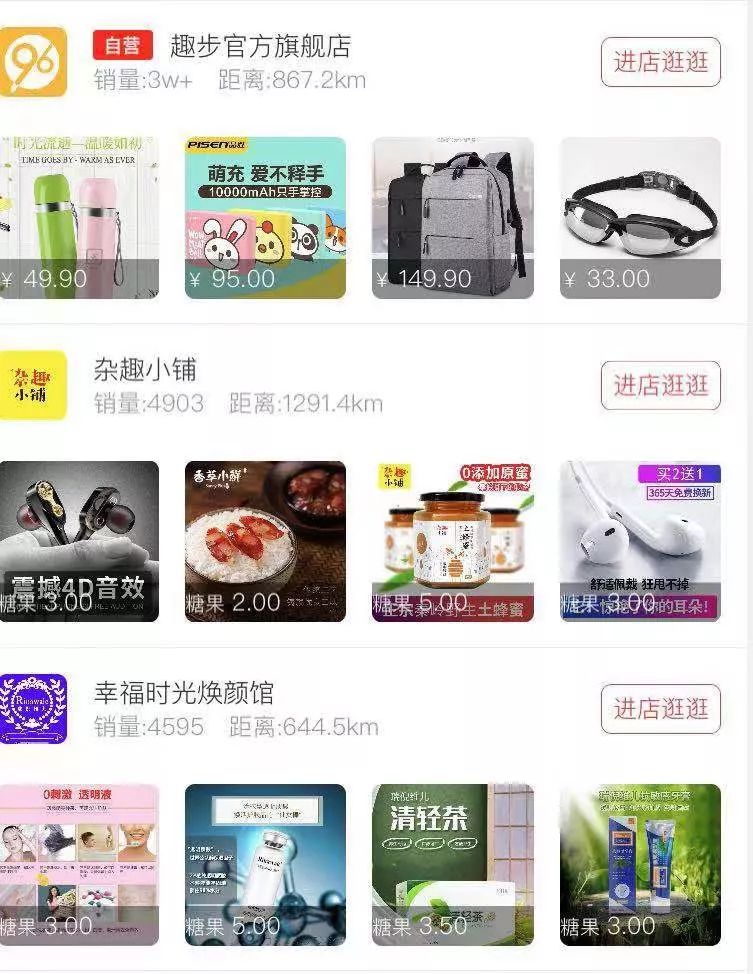 The fun step is very clever, giving a seemingly reasonable reason is that the fun step has a mall, can directly trade with candy, charge the relevant platform service fees and advertising costs. One of them adds a candy application scenario, and the second can also serve as a business model for the fun step.

How to ask: The handling fee for candy cashing in RMB is close to 50%. Which merchant is better at the 50% increase in sales? What is the significance of the price competition on Taobao? Even if there are trading data on the amount of merchandise on the fun step, it is hard to escape the suspicion of being brushed.

The advertising fee income is even more irrelevant. Regardless of the purpose of improving the conversion rate of the product, it is obvious that the fun step platform cannot have real data conversion. What is the significance of advertising?

Therefore, it is not an exaggeration to label the entire funstep system with “MLM” and “Funds”.

Prevent funds from being fast

The so-called fund disk means that there is no hematopoietic function. The dismantling of the east wall to fill the western wall will not be different because of the blockchain technology and the business model of the bells and whistles. The same is true for the fun step.

There are two directions to prevent rapid crashes.

One: continue to pull new and increase new funds.

It is also the meaning of the existence of “activity” and “contribution value” in the interesting step system.

Second: to prevent those wool party from licking wool too fast, that is, the funds consumed are too fast.

Do you often see that the network push group often puts a single order, and the certification gives a few yuan? In this respect, it is necessary to increase the cost of wool, KYC certification to face and pay a certain fee, the cost is not high, is the means to prevent rapid consumption of funds, and does not attack the enthusiasm of the real promoters.

Some media reports have explained the motives for selling information. In fact, this is not the most important. Its main purpose is to limit the wool party.

Signs of crashes often need to be seen, and there are signs of emergence. Everyone will have a backlog of panic. In this backlog, it is often tacit. This is shared knowledge (everyone knows but does not say). Once the public is formed. Knowledge (which everyone knows) will collapse in a few days or even hours, and no time will be prepared for anyone.

There are currently three signs of crashes.

The KYC certification payment has changed from 1 yuan to 3 yuan, which means that the consumption rate of new admission funds has not allowed the capital system to function normally and is in a collapse trend. In fact, some users are currently blocked in the case of candy exchange currency.

Second: the fun step official has been trying to escape responsibility.

In the fun step 2.0, the candy trading center was originally embedded in the APP (in fact, this has violated the boundaries of the law can refer to the relevant documents issued by the seven national ministries and commissions on September 4, 2017). After the discovery of this problem, the fun version upgraded the version. By 3.0, the transfer center has been transferred to the outside to call the GHT trading platform. In fact, this trading platform only trades GHT for the interest system trading needs, and it does not change the medicine.

In addition, the official frequency in the interest step APP announcement center, prohibiting the use of candy as a digital currency, prohibiting walking to make money to promote slogans, prohibiting speculation of candy and a series of words with the nature of pyramid schemes, this is the embodiment of evading responsibility.

The implication is that user hype has nothing to do with itself, it is the responsibility of the user, especially those who develop the offline and profit from it.

In the event of problems, the KYC certification (including mobile phone number, face, Alipay, ID card) and other information played by the Fun Step platform will play a role, and these people will be pursued peer-to-peer. These people need to spit out illegal income and be held criminally liable. (PS: So please pay attention to those who often send friends to promote the fun step, maybe Ta is a big fish, when the law enforcement officers are responsible for the time, you can get some rewards when you provide information) 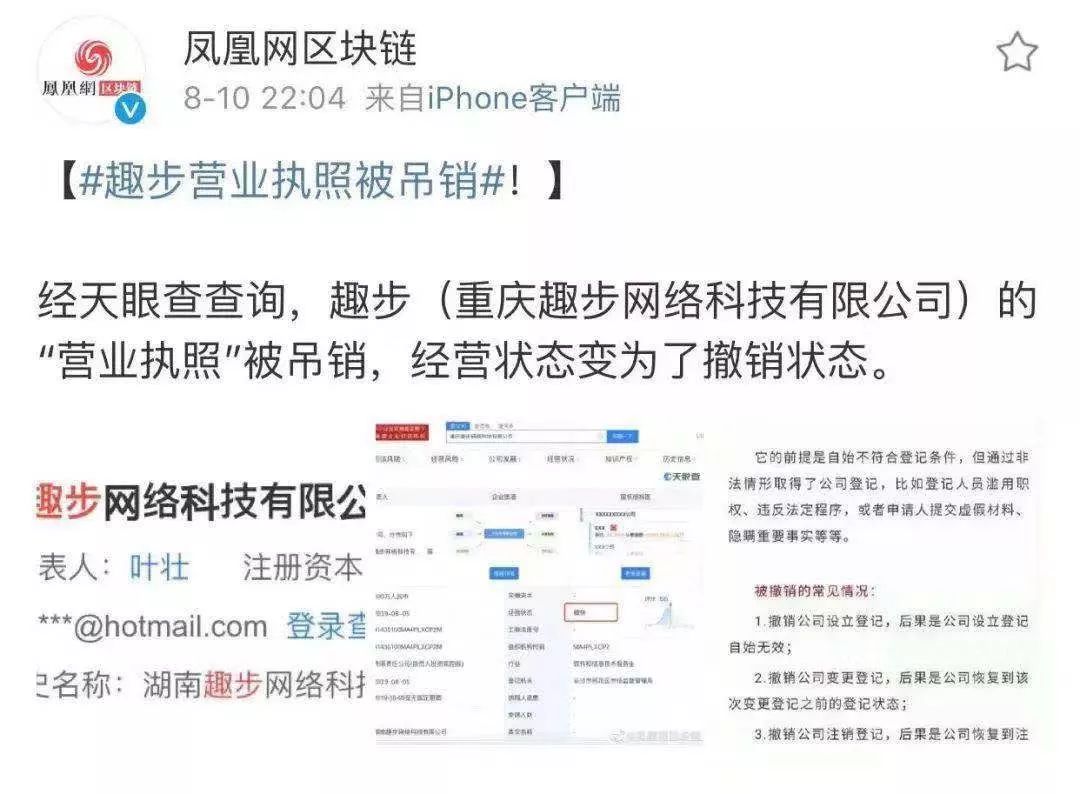 Authoritative media such as Phoenix.com has been involved in supervision. On August 10th, the Phoenix Chain blockchain official revealed that the business license of the main company Chongqing Funstep Network Co., Ltd. was revoked, although the subject has been suspected of recovering. But the most important thing is that the authoritative media has been involved in supervision, and more details will continue to be exposed.

Of course, not only the authoritative media, but also the Public Security Bureau has been involved in the investigation. On August 5th, the Bole City Public Security Bureau issued a content on the official account "Safe Bole" headline "About the promotion of investment "Fun Step" APP suspected of pyramid scheme fraud."

Then, there will be more authoritative media, and the Public Security Bureau will review and blame the MLM team behind the interest step.

The fun step fund disk has been on the verge of collapse. At present, the crisis has been redeemed. It is imperative for the participants to save the loss. We must wait until the time of the total collapse, and then we will know it! ! !