Guide: Whenever we talk about the value of blockchains to games, we often mention the true ownership of game props and allow players to trade freely in the market. From the world of traditional games, talk about these two points, Diablo III A bend that always wanders around. Diablo III has attracted countless Blizzard fans as Blizzard's veteran IP. Its new auction house mechanism centralizes the ownership and free trade of the items in a simple and rude manner, but the players do not buy them at all. Moreover, the short life cycle of the transaction line and the difference in user's wind assessment have persuaded a lot of Diablo. In essence, if the game economy design and game incentive feedback design is unreasonable, the value of true ownership and free trade is only a castle in the air.

This article was translated from "Diablo III's failed Auction House: Why true ownership won't save your game", some of which were slightly modified.

What is an auction house?

The auction house is a feature released in Diablo III that supports the trading of in-game items in third-party markets and informal trading between players.

According to Jay Wilson, the former head of Diablo III: " The emergence of the auction house carries the mission of legalizing third-party transactions . Players do not have to jump to third-party websites when trading game props, and they can do it in the game. This will effectively reduce fraud, fraud, spam, hacks and protect the legitimate interests of players." 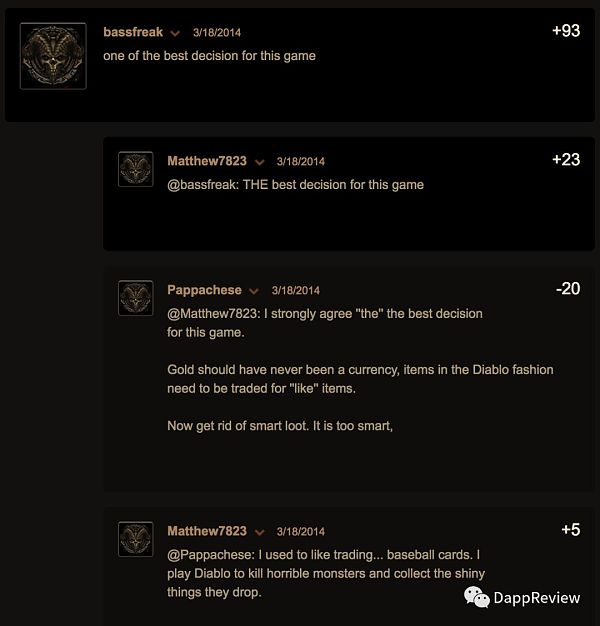 The auction house is a market for trading spoils and is divided into two types: one that uses only in-game currency (gold coins) and the other that allows for legal currency transactions.

The two markets are in a bad position, and they all have to be responsible for the problems that arise in the game. Because they destroy the reward loop of the game, they create a shortcut that weakens the player's game power. 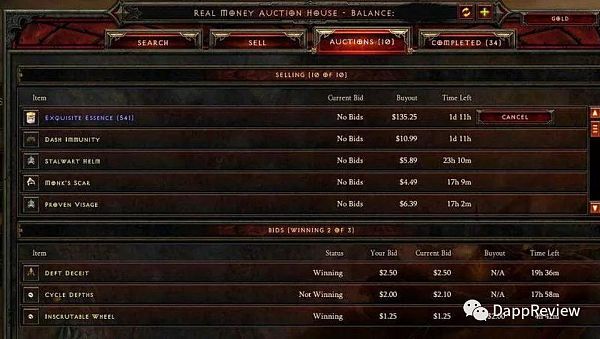 The initial intention of Blizzard to introduce the auction house is not wrong, namely:

It looks pretty good, what went wrong? To find out, you need to understand the motivational structure of the game. 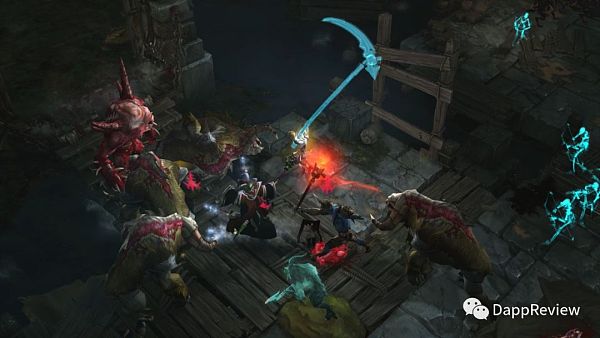 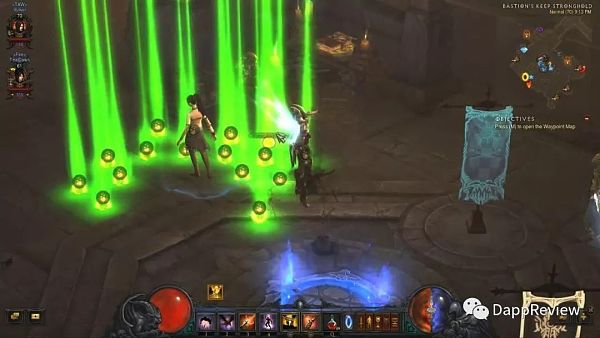 Get the fallen loot

It's important to note that finding the items you need in the dropped loot is a small probability event, so you need to spend a lot of time to blame.

If you want to know what the goal of this game is, most Diablo players will tell you that you are getting the best loot. Because the quality of the spoils is a powerful guarantee for the victory of the battle.

How does the auction house destroy the game?

Before the auction house appeared, we played an inspirational game that relied on personal diligence and tried to brush the equipment to reach the peak of life. After the auction house, the structure of the gameplay became the following cycle:

It's not hard to find that the auction house changes the player's motivation and they spend more time trading instead of playing games . Since players can use cash or gold to buy items, only players who know how to blame show sub-skills that are not too smart, and smart people can get better loot in the auction house every day.

We know that players used to get a lot of useless loot in battle. But now it is different, he is scribbled, my treasure. At the auction house, because everyone's game progress is different, there will always be players willing to pay for what you don't need, so that you can accumulate resources to purchase the items you need. It can be said that players can get value very efficiently from every operation of the game.

This means that players can spend less time entangled with monsters. The game has become more focused on trading than on play. Things are bound to reverse, and some players are beginning to realize that the game is no longer interesting. Force, a former Diablo player who once played a video of his game on YouTube, said:

"I didn't buy the auction house simulator. I only bought a copy of the program. I just wanted to play the game, but it's not worth it. People say, 'Force, don't play a game,' but I can't explain. I just don't have fun anymore. The appearance of the auction house makes people feel that there is a need to trade items to be promoted. This makes me unable to play. " 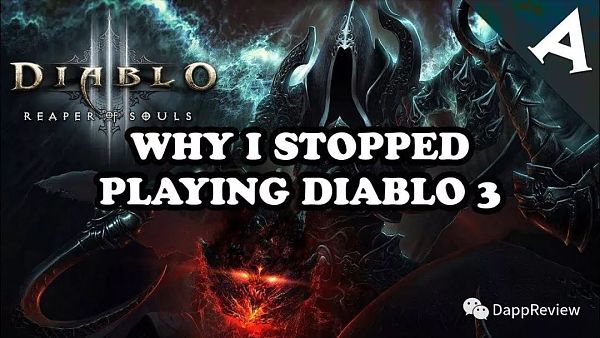 In the Blizzard Players Forum, discussions about why the auction house was dismantled were in full swing, and one poster said:

"What you have to understand is why open trading doesn't work, why the auction house doesn't apply to Diablo III. The reason is that 99% of the players' growth comes from equipment. This single reason allows players to buy Super OP [in game terms) In the 'overwhelming', crushing others' equipment."

“You don’t have to spend a long and difficult time in the game as you used to. You need to do everything to reach level 70. It’s a really sad request, and then you can buy whatever you want. It kills the player’ liver. The motivation of the game 'and 'playing the game' makes the player feel nothing to do. "

Does this mean that the true ownership of the game items will kill the video game? !

This is why the design of great games is so important. Game designers know every decision they make about the game: each action is enabled, each rule is imposed, and each feature introduced affects the player's gaming experience.

As the Diablo auction house did, real ownership would highlight the problems in the game. However, it also offers new opportunities for unique game design and creates a more rewarding experience for gamers and game developers.

What does true ownership mean for video games?

If the true ownership of the game item becomes the standard, then the game mechanics must adapt to the following characteristics:

What opportunities does this have for game developers?

When players are free to trade assets, game developers must be prepared for the new gaming economy. Players who create value should get a return from the player who consumes the value. 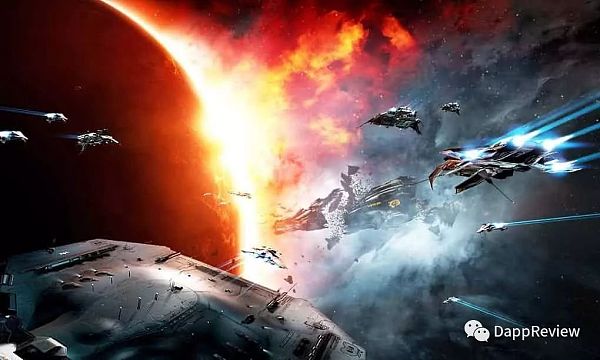 The MMORPG game Eve Online is a good example. It is a game-driven world with "open economy" features, and game developers have little interference with the game . This idea is supported by the player, and even if the player league kills one of the characters and destroys its £10,600 worth of assets (equivalent to the biggest theft in video games at the time), the developers are still in the limelight.

The game company CCP said, "We only look at what happened, we can see that no rules have been broken. Only trust has been broken. Guarantee trust is not our job."

In Eve Online's powerful in-game economy, players can engage in careers and activities such as mining, robbery, manufacturing, trading, exploration and combat. The progress of the game depends largely on the player's choice, not the script of the scriptwriter. According to the 2015 Guardian article:

"This is not a passionate competitive game like StarCraft. Its victory is very slow. They need long-term investment and even leadership. This is a game about social interaction and self-made goals. This gives the game a unique the power of."

As of 2013, Eve Online has a population of more than 500,000, and when it was nearly 15 years old, it became one of the few virtual worlds that have survived for more than a decade.

"Liver" out of the spoils alternative

Many games are popular with sheet metal players. The fee can save the player from the hardship of the "liver" and easily gain the advantage. In addition to the direct purchase of better weapons or skin, the money can also open a fast-growing green channel.

However, it is a profound knowledge to let sheet metal players have fun without alienating non-paying users . This means that you must properly retain the gameplay that relies on the player's skill in the game, rather than everything that follows Money Talks.

For example, in the PvP strategic mobile game Clash Royale, players can get more powerful cards by paying for advantage cards or upgrading cards. However, in order to win in the arena, teamwork, strategy, experience and skills are still essential.

In addition to sheet metal, Clash Royale players can also improve the winning percentage by:

Having true ownership means that players can choose to trade in-game items in different markets. They can trade online, offline, face-to-face, trade in a physical market, or give it directly to others.

Although game developers must give up some of the game's control, the benefits that come with it are huge. As the exposure of the game project increases, more new players will join the game.

Market price determined by the market

Although developers often want to control all aspects of their in-game economy in order to predict revenue, the CS:GO skin market has proven that allowing game products to trade in the secondary market will increase commodity prices . The price of items in Steam is hard to prevent the price of some rare items in the game from growing due to huge demand, which is difficult for players to accept, but the price of this hardtop is constantly rising. However, if the developer of the blockchain game encodes the cost of each transaction each time the game item is traded, the higher the price of the item sale, the greater the revenue they will receive from the item.

The trading line established by Diablo III to achieve true ownership of the item changed the gameplay loop, causing the game to crash. From this it can be seen that simply realizing the real ownership of the item can have disastrous consequences , and the real ownership of the items in any game must be organically integrated with the overall economic design of the game. In addition, developers are accustomed to reducing control over the game economy and decentralization of economic rights. A game can survive in a market economy, and the true ownership of its items makes sense. For blockchain games, a more open trading market and full prop control means more sophisticated and affordable game economic design and gameplay logic. Just adding these cool new features doesn't make your game fun or more engaging.