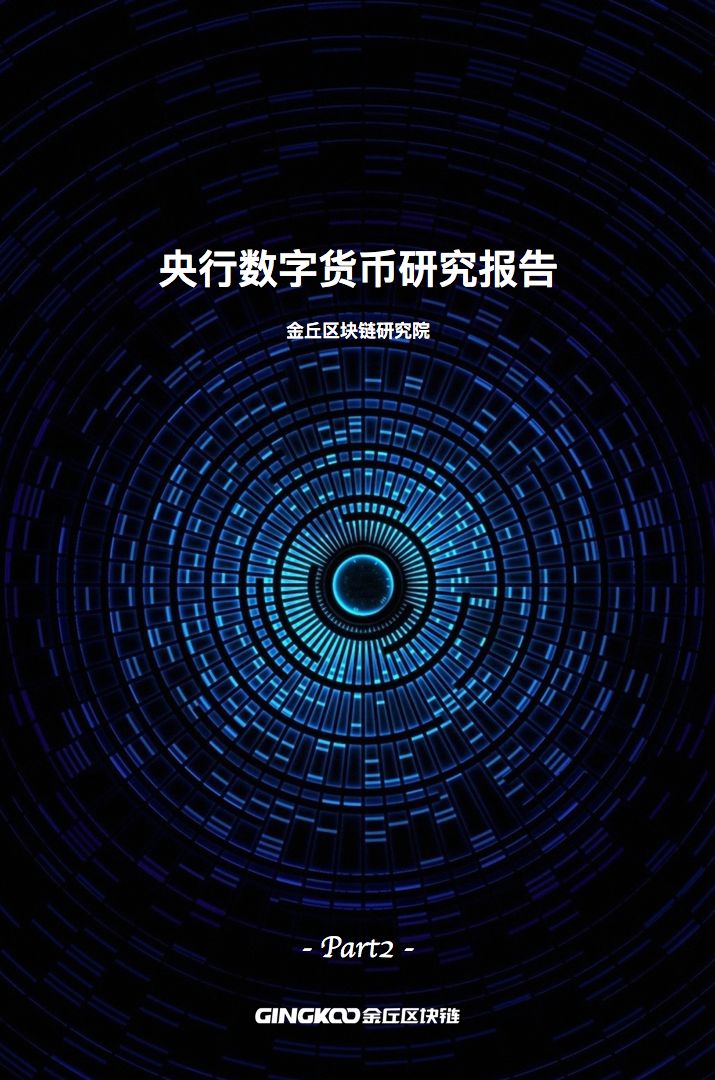 The main problem we will solve in this paper is:

1. Construct a currency assessment model from a demand perspective;

2. Use the currency assessment model to quantify the mainstream currency form;

4. From the perspective of supply, explore the impact of the central bank's digital currency.

First, construct a currency assessment model from the perspective of demand

As mentioned above, "Whether a specific form of money has value, we must judge from two dimensions of supply and demand." In this paper, we will first build a currency assessment model.

From an economic perspective, money has three main functions: the unit of valuation, the instrument of payment, and the storage of value.

1. unit of valuation (a unit ofaccount) : Money acts as a yardstick function for pricing, and the same unit of money can theoretically be exchanged for the same amount of goods.

2. A means of payment : Act as a medium for payment and facilitate transactions.

3. Value store (a store of value): A secure form of value storage that prevents multiple value risks from occurring in a secure value store. 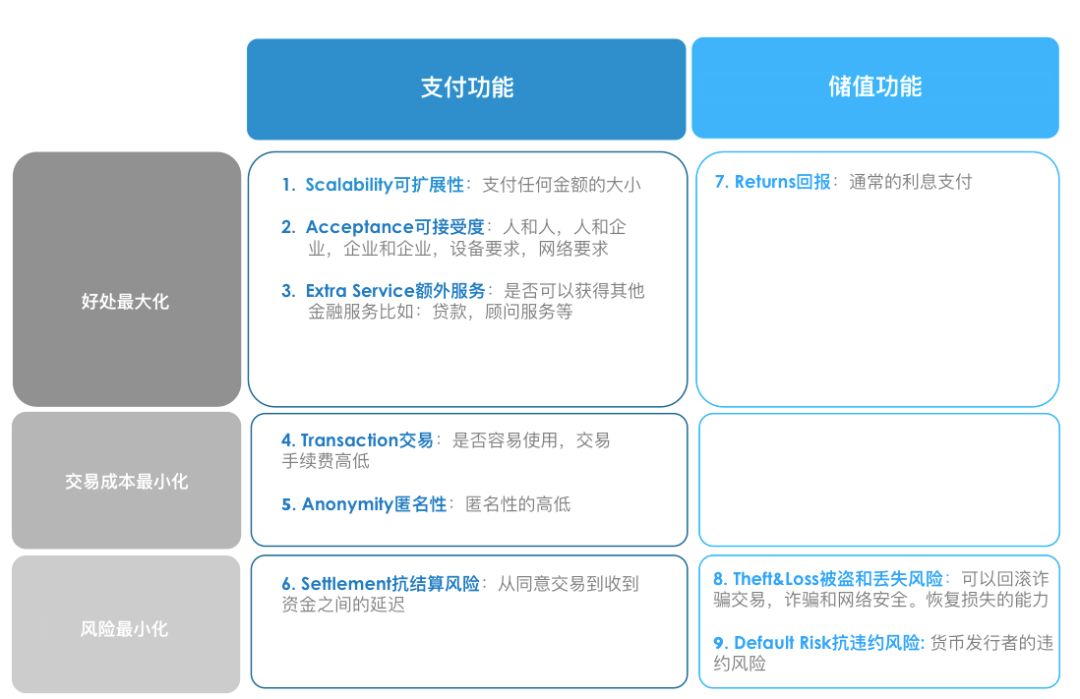 Scalability scalability: supports the size of any amount;

Eatra Service Additional services: Whether you can get other financial services, such as loans, consultancy services, etc.

Anonymity Anonymity: the level of anonymity;

Settlement anti-settlement risk: the delay between agreeing to the transaction and receiving the funds;

Theft & Loss is stolen and lost: the ability to roll back fraudulent transactions, fraud and cyber security, and recover losses;

Default Risk: The default risk of a currency issuer.

Second, use the currency assessment model to quantify the mainstream currency form

Based on the above currency assessment model, we quantify the mainstream currency patterns in the market, including cash, cryptocurrency, electronic cash, bank deposits, and central bank digital currency (CBDC). The Jinqiu Block Chain Research Institute has made a radar chart for currency assessment based on different currency characteristics. The larger the coverage area, the greater the advantage of the currency. On each indicator, 5 is the lowest and 30 is the highest.

Cash is not a popular payment method in general. The main problem is the high transaction cost (there is a lot of restrictions on the physical payment of the two parties, withdrawals, etc.), easy to be stolen (especially large), no return (lack of interest) ). But the advantages of cash are also very prominent, such as timely settlement, no information system risk, and completely anonymous. 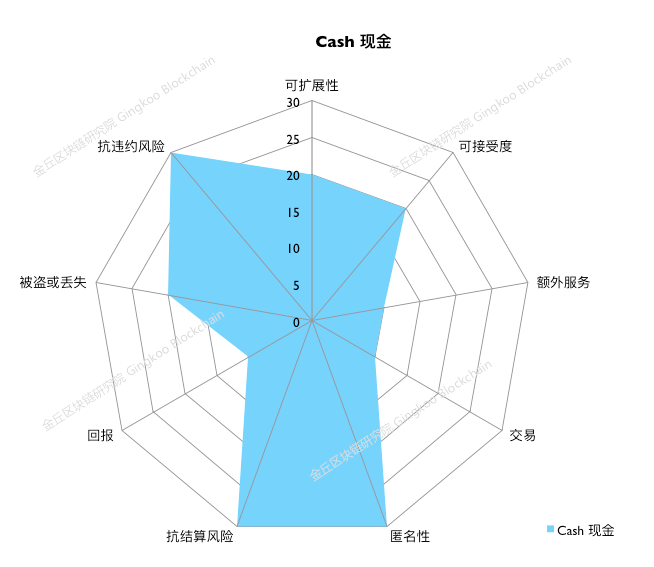 The most unattractive payment method, which is dragged down by the settlement speed, has a low score against the settlement risk. At the same time, there are obvious defects in theft and loss, transaction costs, additional services, and acceptability. The only advantage is in the anonymity dimension. 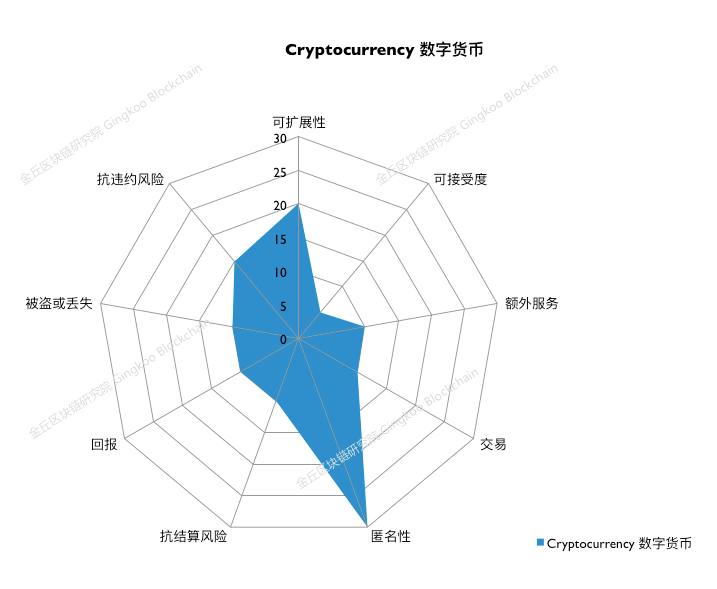 The e-cash advantage is obvious and has a wide acceptance because of its extremely low transaction costs (usually a good customer experience, payment scenarios designed by Internet companies) and an abundance of additional service scenarios. Due to regulatory and regulatory restrictions, e-cash scalability has the opportunity to cover large payments, but its acceptability is limited in B2B scenarios compared to bank deposits, and is as anonymous as bank deposits. The degree of sexuality is not high. 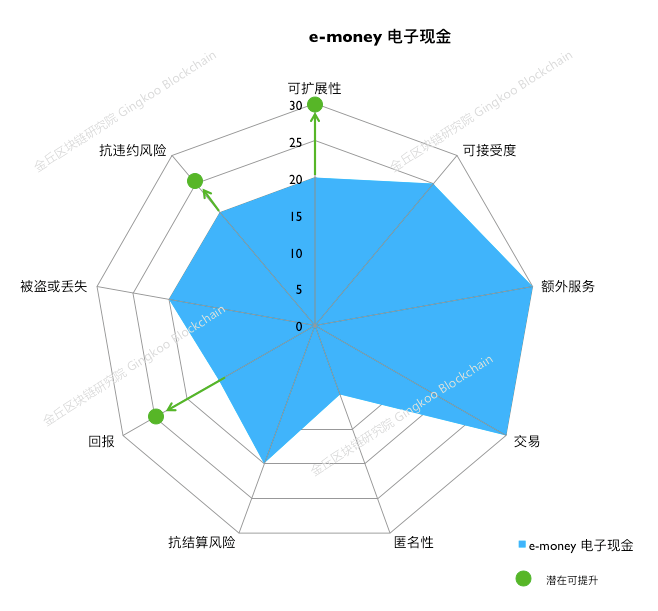 A variety of additional services can be superimposed, and the developed online banking support also brings high acceptance (2C and 2B are widely accepted), and the payment is highly scalable (supporting large and small payments). The payment fee is very low and there is no settlement risk. The above five dimensions are full marks. The risk of loss and theft and the default risk (with account insurance coverage) are relatively controllable, the only shortcoming is that it is not anonymous. 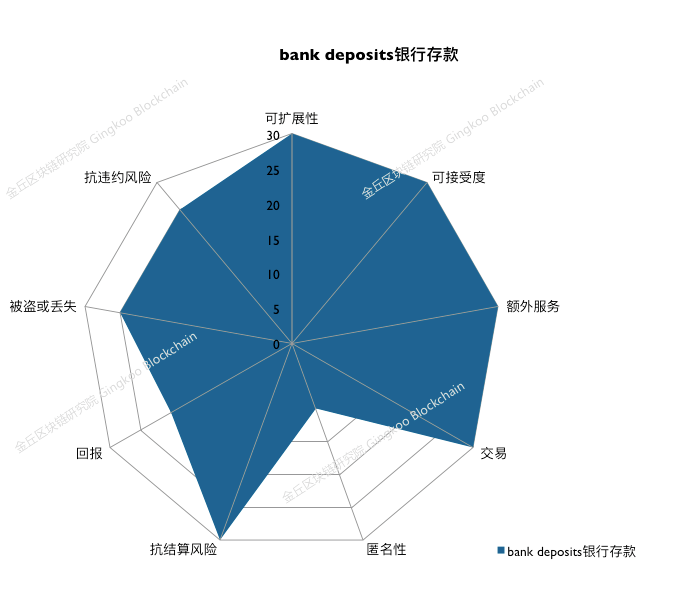 CBDC is a new form of currency. Since there is no CBDC used on a large scale in the market, we can only dynamically predict its quantitative indicators. 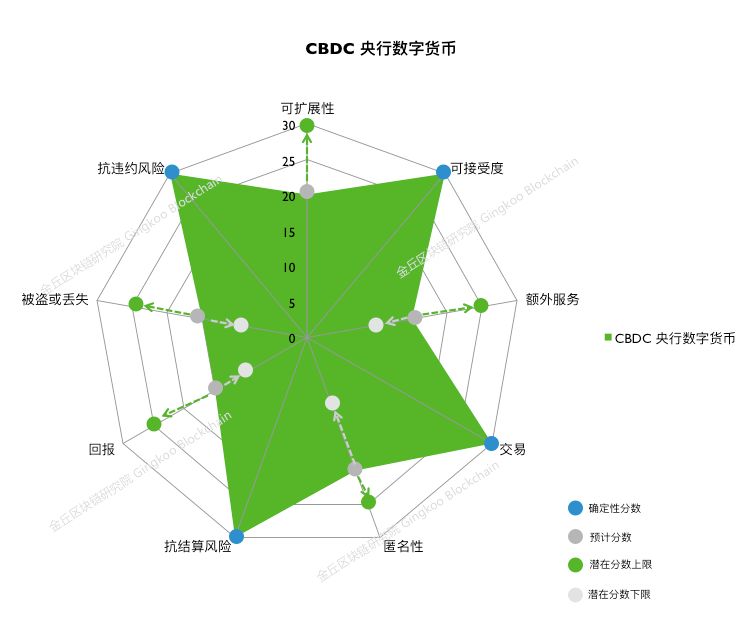 The CBDC has two deterministic advantages, one of which is anonymity. CBDC's anonymity score is higher than bank deposits and e-cash, although it will not be completely anonymous like cash. Another advantage is the risk of default. In the previous article, we mentioned in the currency classification that CBDC is the central bank's currency, so its anti-default risk score is full compared to electronic cash and bank deposits.

Of course, there are some common advantages between CBDC and bank deposits and electronic cash, such as low settlement risk and transaction cost, and high acceptance.

But there are also several deterministic disadvantages, or uncertainty: in the interest-reward dimension, CBDC can provide a complete interest plan, but there are more uncertainties than deposits; in the prevention of theft and loss dimensions, If the CBDC is highly anonymous, it will not be able to recover and freeze fraudulent transactions. If the anonymity is low, the theft and loss may be higher; in the scalability dimension, the potential CBDC can support large payments, or it may be like Like electronic cash, it is within the scope of small and medium-sized supervision.

In order to understand the central bank digital currency (CBDC) more intuitively, we focus on comparing it with three representative forms of currency: bank deposit (M2), cash (M0) and Libra.

The CBDC is significantly inferior to bank deposits. In the quantitative radar chart, bank deposits have obvious advantages in the four core indicators of “scalability”, “extra service”, “return”, “stolen or lost”, but “anonymity” and “anti-default risk” "The performance is not good enough to CBDC. In fact, China's financial system is very developed, and the function of bank deposits as a form of payment has been quite perfect. At present, China's M1 and M2 have been electronically and digitized. 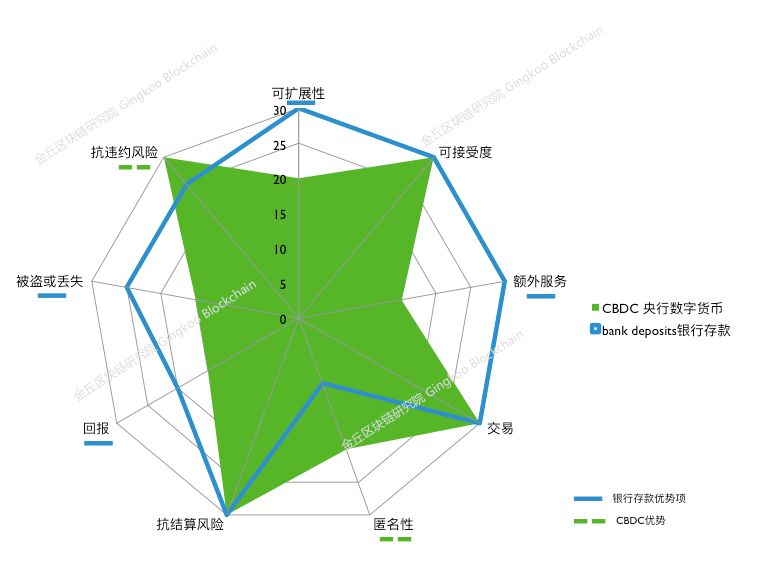 Compared with cash (M0), CBDC has potential advantages in the “acceptability”, “extra service”, “transaction” and “return” dimensions. Cash is easy to be forged anonymously, and there are risks such as money laundering and terrorist financing. In areas where account services and communication networks are poorly covered, the dependence on cash is still high. With the development of the digital economy, banknotes have become increasingly out of date in many scenarios, and replacing CBDC with cash is a worthwhile pilot option. 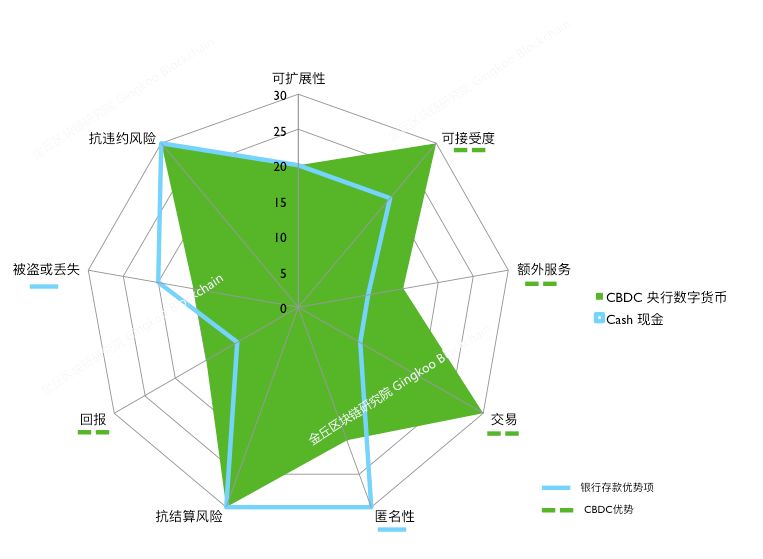 As an i-money, Libra also predicted the parameters based on the public information provided by Facebook and compared it with the central bank's digital currency (predictive parameters). 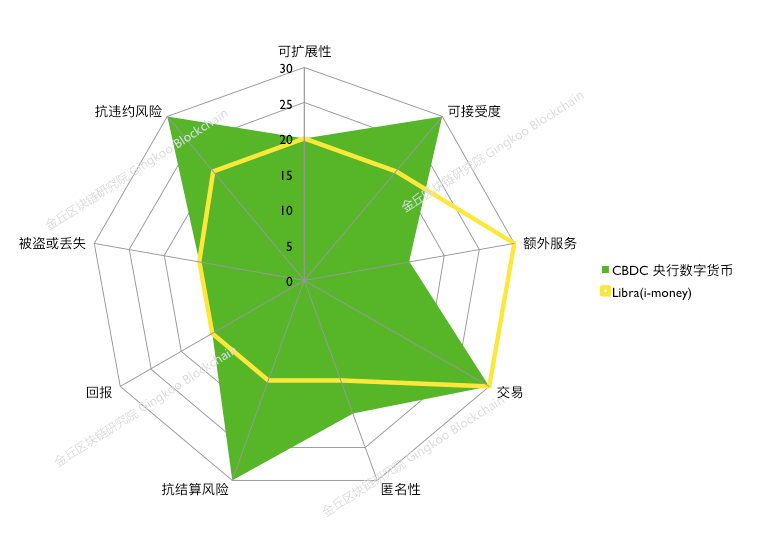 Libra is limited in large transfers, so the score on "scalability" is medium; Libra's acceptance in B2B scenarios is limited, so the "acceptability" indicator scores lower than e-money; Libra does not mention To any protection of anonymity and user information, taking into account Facebook's predecessor, the "anonymity" score is lower than CBDC but higher than e-money; Libra's "anti-settlement risk" and "anti-default risk", the score is lower than the central bank Currency, B-money, is also lower than e-money such as Alipay, which accepts financial supervision; Libra and e-money can get full marks in terms of “extra services” and “transactions”.

Of course, with the clear regulation and Libra's own development, like e-money, Libra will gradually improve the scores in all dimensions, but this is not within the scope of our research report.

Under such a scoring system, Libra is lower than CBDC in multiple dimensions as a payment method. At the same time, there are obvious weaknesses compared with e-money and b-money. However, in addition to regulatory considerations, another reason Libra has placed a strategic starting point in the unbanked crowd in emerging markets is that Libra has more advantages than the currency forms of third world countries, which is a good entry point. .

Fourth, from the perspective of supply, explore the impact of central bank digital currency

From a supply perspective, that is, from the perspective of the central bank's regulatory perspective, the impact of central bank digital currency (CBDC) is a very complex topic. Due to the relationship between the length and the main research direction, we only briefly discuss the framework.

Depending on the design, CBDC can enhance or weaken the financial integrity of the national financial system (Financial Integrity).

This model will fully evade the risk of financial soundness, but how to establish a set of effective privacy protection mechanisms that users can trust needs to be explored in practice. Another possibility is to not limit the limit of the transfer limit, and not to record the transaction identity and information in a completely anonymous form. The problem with this method is to undermine the existing financial soundness. It should be emphasized that in the design of CBDC rules, there are some flexible rules in the field of KYC (customer identity authentication), but strict and effective control will be carried out in AML (anti-money laundering) and CFT (anti-terrorism financing) .

If CBDC and bank deposits form a competitive relationship, CBDC will affect financial stability and financial disintermediation. This is why the Chinese central bank's digital currency (DC/EP) adopts a two-tier architecture and is only a deep consideration for replacing M0.

Since the information is the latest and the amount of information is limited, the indicator needs to be completed under a number of assumptions. In the third part of the next report, we will focus on the central bank's digital currency (DC/EP), which will be launched by the People's Bank of China. We will make quantitative predictions and policy interpretations on DC/EP.

From an economic point of view, it is necessary to inherit the rational connotation of the long-term evolution of traditional currency. Therefore, there should be no change in the intrinsic value of the legal digital currency. The change is in the digitization of the currency. – Yao Qian, former director of the Central Bank Digital Currency Institute

"Secret History of Bitcoin" (7): What is the Bitcoin Alert System?