It is worth noting that the increase in the market value of Bitcoin is not due to the increase in bitcoin prices, but rather because of the general plunge in other altcoins. 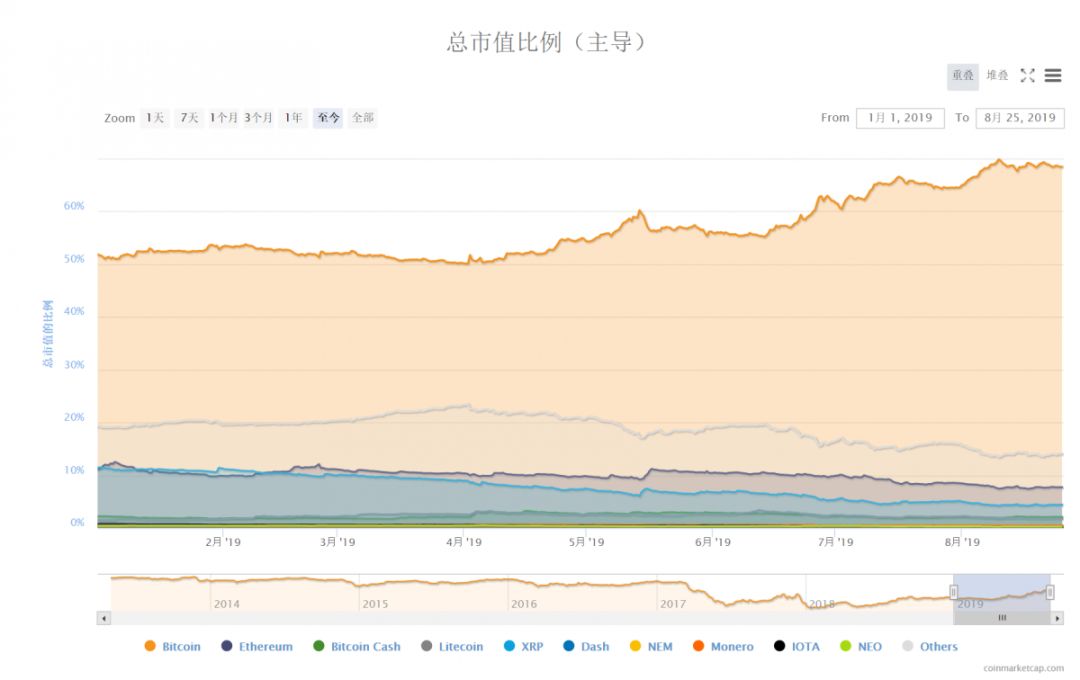 This picture reflects the price trend of Bitcoin and major currencies such as ETH, BCH, LTC, XRP, Dash, NEM, Monero, IOTA, NEO and so on. It is obvious that only bitcoin prices are rising, while other digital currency prices have returned to the level of the beginning of the year after a wave of gains, and some even fell below the beginning of the year. 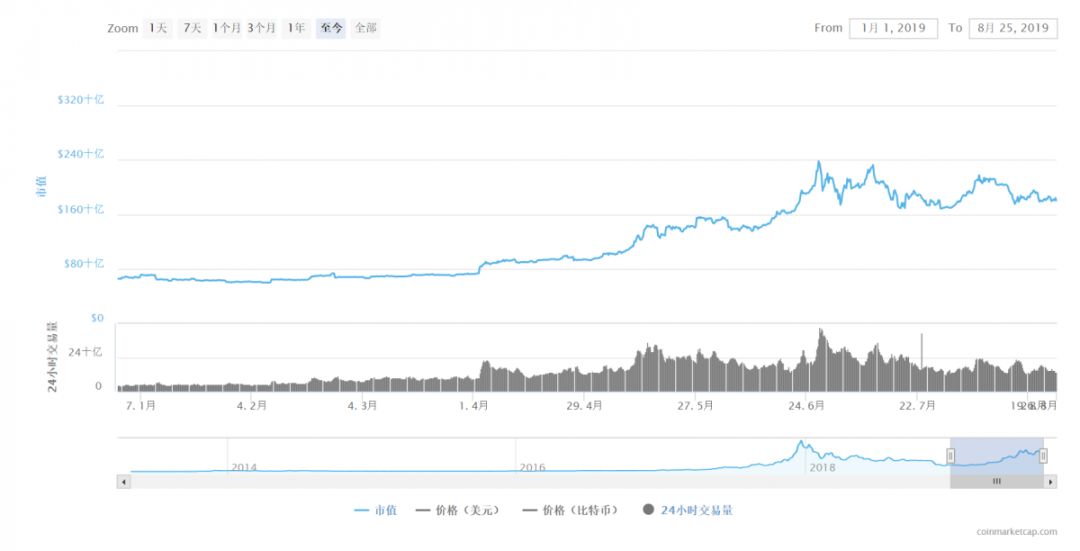 The above chart shows the market value of Bitcoin in the year-to-date. The chart below shows the total market capitalization of other digital currencies in the year-to-date. Comparing the two figures above, the market value of Bitcoin has been slowly rising this year, but it has only recently been adjusted. In addition to bitcoin, the total market value of the altcoin has risen a wave this year, and recently it has been greatly adjusted back. It has basically returned to the position at the beginning of the year. This is why Bitcoin's weight is rising.

This year's bull market is a bitcoin bull market, and more and more institutions and individuals are pouring in, which also highlights the investment value of Bitcoin.

In recent years, although Bitcoin has often been mentioned in various media, although the halving of Bitcoin is expected to stimulate a lot of people, although the perception of Bitcoin has changed a lot since a year ago. …but shifting the topic from just focusing on the price volatility of bitcoin to its potential value will be a long process and people still need to receive more education.

US President Donald Trump's recent tweet about cryptocurrency and bitcoin, despite being ridiculed, can get the attention of the top US leaders, which is good for digital currencies, after all. Caused more people to pay attention. It also shows that people must go through the learning curve to truly understand how much change Bitcoin and cryptocurrency can bring us in the future.

A simple fact is that Bitcoin will soon become a key pillar of the global financial system. This is just a matter of time.

Looking at the current shocks in the price of bitcoin, the trend is still unstable, this may be a bold prediction. But if we stand taller and observe some of the macro trends that are happening, it is clear that Bitcoin is experiencing one challenge after another, and it is becoming more and more powerful.

In the first half of the year, bitcoin opened the bull market after the halving of bitcoin expectations and the spur of the good news from traditional financial institutions. In-depth analysis, the following five reasons are that Bitcoin really wins the core of the world.

The banknotes are quickly out of date. Many companies are moving towards cashless. In China, under the leadership of Alipay and WeChat, the cashless era has begun. International PayPal, Venmo, Apple Pay and Google Wallet (and others) are driving cash out of date.

Now, people are binding credit and debit cards to these third-party applications for payment, but I believe that a digital currency can replace these cards in the near future.

The key is that this consumption habit has been formed and is being universalized worldwide. Once the public can better understand Bitcoin's unique value proposition, a turning point will occur when Bitcoin is used as the de facto digital currency. Especially when zero-acknowledgment transactions, lightning networks and other potential technologies can speed up bitcoin transaction processing faster, all problems are solved.

Facebook's Libra coin uses cryptographic technology and is a digital currency, but it is not a cryptocurrency. The defining characteristic of cryptocurrency is that it is not issued by a central agency, it is decentralized. Libra does not use blockchains, but is centralized, which means that there is a regulatory agency (ie Libra Association) that provides supervision and “promotes the operation of the Libra blockchain”. It is also linked to the fiat currency in the bank account, so the Libra Foundation can theoretically refuse service. Because they control the bank account.

In the real world, what you really feel about digital money is to use it to pay for goods and services. If the government has control over it. Maybe you will delay your license renewal and the government will disable your digital currency. And because of the unlicensed nature of Bitcoin technology, these things will never happen.

In contrast, Bitcoin is completely decentralized, meaning that no single entity is responsible for its operations. No one can turn off Bitcoin or edit a transaction ledger to manipulate currency. This is its most attractive part.

In countries with currency depreciation, or in countries with hyperinflation, storing value is almost impossible for low-income people still facing the pressure to maintain poverty. Imagine a fisherman in a developing country saving 10% of his income each year, but after 10 years he found that the actual value of his savings was cut in half or worse.

Bitcoin offers a choice for citizens who want to withdraw from their domestically manipulated financial system, or at least partially hedge against the risk of sudden fluctuations in the exchange rate. Similarly, persecuted individuals can take their wealth away from government interference.

Bitcoin is borderless. The entire industry is built around the currency transfer between the state and the currency. For a long time, companies such as Western Union have charged high fees and increased the friction of capital flows. Although new companies such as TransferWise have sprung up to reduce this friction, Bitcoin can create more intense competition.

There are also issues with access. A large proportion of the world's population does not have a bank, which creates a huge income gap between the “rich” and the “poor”. Bitcoin is completely unlicensed. You don't need anyone's permission to own Bitcoin, which makes it easy for any user to get.

In a world of more than 5 billion mobile phone users, it is easier for people in third world countries to have Bitcoin than to open a bank account.

The market value of Bitcoin is close to $270 billion. It is estimated that 9% of Americans own Bitcoin, of which 18-34 Americans make up 18%. Compared with other asset classes, Bitcoin's priority purchase rate is rising.

Overall, the Bitcoin brand has a much stronger momentum than any other digital currency.

This is very important!

If you think that money is a common belief system, then these indicators are important evidence points, and they are a sign of future use.

Combined, the above case creates a network effect that makes Bitcoin more valuable, which increases bitcoin usage and accelerates Bitcoin growth. This is a virtuous circle.

Let those with simple minds discuss the price changes of Bitcoin! Only those who have long been concerned about Bitcoin know how transformative this digital currency is, and we are only scratching the surface of its potential.