At 1 am on April 11, the wavefield DApp TronBank was attacked by counterfeit currency and about 170 million BTTs (worth about 850,000 yuan) were stolen in one hour. BTT is BitTorrent's Token, and BitTorrent is a famous project acquired by the wave field last June. The BTT was stolen and became the first episode on its road to acquisition.

Since 2018, the acquisition of blockchain industry has been frequent. After the currency price fell sharply, the cryptocurrency has been in a low tide, and until recently there was only a sign of warming.

During the bear market, although the secondary market was sluggish, it was a good time for those teams that had accumulated abundant capital in the previous round of bull market. The acquired party is unsustainable in the bear market, but its projects are indeed valuable: they have their own technical talents, community members, mature products and a large number of users, but there is no shortage of funds; for the buyer, there is a certain capital but need to be fast Get resources and layout industry.

From this perspective, the acquisition is undoubtedly a win-win approach.

In principle, BitTorrent is a P2P file sharing protocol. When using the BT protocol to share files, the downloader is also the uploader. The downloader's computer will store a part of the already-good file, which greatly improves the file download speed.

At the peak of the BitTorrent traffic even accounted for 70% of the entire network traffic, so a small giant in the classical Internet world, but has not been able to find a suitable business model, can not be very profitable, and later tend to be weak, until Acquired.

BitTorrent has more than 170 million users and accounts for 40% of Internet traffic per day. The acquisition of BitTorrent can help the wave field expand Tron's users and extend its technical architecture.

It is no wonder that Wave Field immediately entered the market after the acquisition of BitTorrent, and sold the corresponding Token – BTT. According to the official website, the new version of BitTorrent Speed, which will be released this summer, will also become one of the usage scenarios of BTT. Users who leave "seed" on BitTorrent Speed ​​will be rewarded with Token. Under this incentive, users will consciously contribute to this P2P network, making it faster and easier to download, thus forming a virtuous circle.

The acquisition is small, saying that the wave field has taken a fancy to the underlying infrastructure and huge traffic pool it has; the big acquisition says that the acquisition is a young blockchain world and the traditional Internet community "cyberpunk" "Handshake and peace. As a rising star in the business world, Wave Field acquired an established IT technology company, and the wave field ecology has officially become the world's largest decentralized Internet ecosystem. It is reported that the vision of the wave field is to allow everyone on the wave field network to freely create content, websites and applications without relying on centralized services, and BitTorrent's philosophy is "flexible access to information channels to achieve decentralization of the Internet. "The two coincide with each other."

Risk Tip: Need to remind readers that although BitTorrent has had great glory, it was a company that was deeply mired in the mud before it was acquired at a low price. The profit model was not innovative. It was once managed by chaotic lawsuits. The founder had chosen to leave. Carry out other projects. Since 2015, BitTorrent has been deadlocked, and one third of the employees were removed. Excellent technology does not mean that the company operates smoothly. Everyone can look at it rationally. It is always unknown whether the blockchain can save the company and let it reproduce its glory.
02 coin acquisition of Trust Wallet

In August 2018, Chanan announced the acquisition of Trust Wallet, a cryptocurrency mobile wallet . This is also the first public acquisition of the currency security.

Trust Wallet is a decentralized chain wallet. The user's private key is not stored on the server. This is a very good complement to the current centralized architecture of the currency.

The Trust Wallet wallet also includes a Web 3.0 browser that allows users to interact with the Decentralized Application (DApp) directly in the wallet. This is like a small program function of WeChat, and the user experience is excellent . CEO Zhao Changpeng also praised Trust Wallet as the "best wallet" he found. 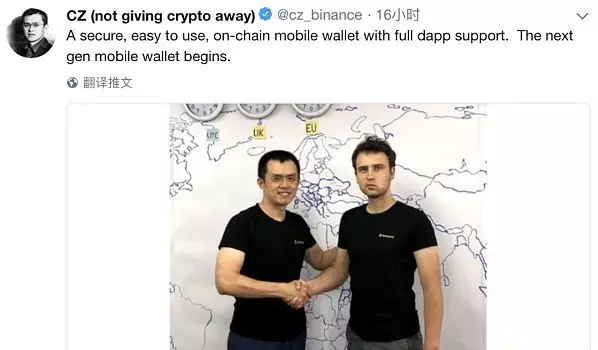 It is reported that in the second quarter of this year, the currency security will officially launch the decentralized trading platform (DEX), when the Trust Wallet becomes its default wallet is very logical.

In recent years, cryptocurrency exchanges have been frequently stolen, from the Mentougou incident to the recent theft of Bitco and Bithumb, all of which prompted us to put assets at the risk of centralized trading.

When users use the Decentralized Trading Platform (DEX), they hold their own private keys, and DEX does not know the user's assets. Decentralized trading platforms and wallets are also a safer and more reliable option for those who want to have greater control and anonymity over their assets.

According to reports, Trust Wallet recently reached a strategic cooperation with the Celer Network, a star project on the Dollar Launchpad. As a wallet and DApp browser portal, Trust wallet can aggregate a large number of users. Therefore, in this cooperation, the two parties will jointly help blockchain developers, so that they can easily develop DApp, and can improve the user experience of decentralized applications, and promote DApp and even the entire blockchain industry.

As the head trading platform, Gansu has been established in July 2017. It took only less than two years to firmly occupy the head position of the comprehensive strength of the trading platform. People have to admire the strategy of Qian’an ahead. Vision and ambitious pattern. The acquisition of Trust Wallet is not only an important foundation for the DEX transaction, but also a step towards the ideal of the blockchain industry from the decentralized world.

The acquirer Circle was established in 2013 and specializes in over-the-counter exchange transactions between fiat currency and digital currency. For Circle, the acquisition of Poloniex can expand its cryptocurrency trading business from off-site to “on-site”, thus further expanding the market size and user type.

Be aware that behind the Circle are a series of heavyweight investors such as Goldman Sachs, Baidu, IDG Capital, Zhongjin Jiazi, Everbright Holdings, Wanxiang and CreditEase. Among them, Baidu is a giant in the traditional Internet world, while Goldman Sachs, Zhongjin and Everbright are the giants in the traditional financial world. One of Circle's biggest supporters is Goldman Sachs. Circle's acquisition of Poloniex strengthens and enhances its position in the field of cryptocurrency.

There is no diamond, no porcelain. The needs of large institutional customers for transaction security are much higher than for ordinary users. After being acquired by Circle, Poloniex also carried out a super upgrade of its basic settings, and the stability of the platform was greatly improved. The deposit and withdrawal speed has increased five times, and the pending order transaction speed has increased tenfold. As a result, existing customer complaints on Poloniex have dropped from nearly 200,000 to close to zero.

It can be seen that Circle's acquisition of Poloniex is not only the integration of business and capital between buyers and sellers, but also an opportunity for large institutions to enter the field of cryptocurrency, and is a further recognition of the traditional financial world to the blockchain world.

Acquisitions in the blockchain industry are not always happy. In February of this year, Coinbase's acquisition of Neutrino caused a lot of controversy.

Neutrino is a blockchain intelligence company that conducts research and analysis on illegal transactions in cryptocurrencies. However, the three executives have a black history of being criticized. They have run a company called Hacking Team, which sells malicious surveillance software to authoritarian regimes around the world, causing journalists and political dissidents to be monitored. Imprisonment or even death.

In the announcement of the acquisition issued by Neutrino, it was very "white lotus" to announce that Neutrino's technology and professionals will help Coinbase to better enhance its compliance process, transaction transparency and user trust, as much as possible. Protect customer transactions from end to end. Neutrino chose to join Coinbase because we strongly agree with Coinbase's vision to create an open financial system, and we will collectively promise to give users a legally compliant and secure cryptocurrency trading venue.

Users of Coinbase do not buy this statement. Faced with this situation, Coinbase executives have issued a more black-and-white statement, which is a classic negative textbook for the public relations sector in the blockchain industry. The statement mentioned: “It is very important for us to stop working with our existing suppliers. They have sold customer data to external third parties, and we hope to control this situation very well. There are technologies to protect data and protect our customers."

This statement accidentally said that it leaked, acknowledging the fact that Neutrino data leaked. This has exacerbated the dissatisfaction of Coinbase users, and the campaign with #deletecoinbase tagging on Twitter has intensified, claiming to cancel the account and uninstall Coinbase. 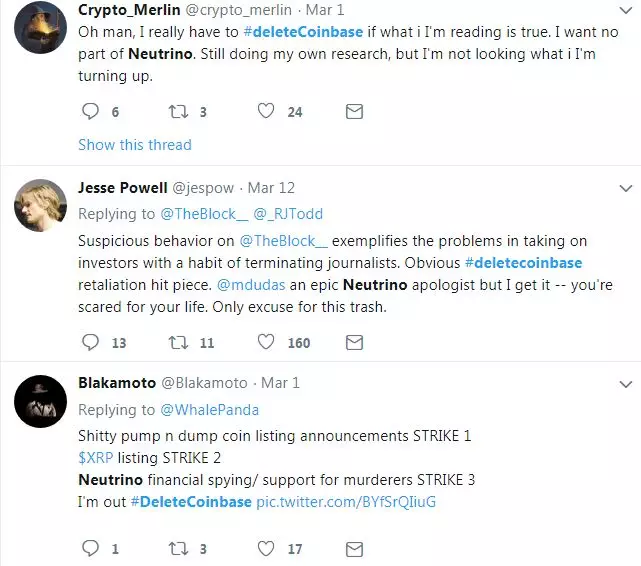 The size of the user is one of the core competencies of the trading platform. This acquisition undoubtedly hurts the user base of Coinbase and makes the powder turn black. From this perspective, the acquisition of Coinbase is a “failure”.

Known as the blockchain of value interconnection , every acquisition in the current industry may be a butterfly that only flaps its wings, which may trigger a “renovation storm” that disrupts the industry and even affects the future world. Although not every acquisition is a great joy, the integration of high-quality resources by the head company is conducive to the healthy development of the industry. In the fast-growing industry of blockchain, the miracle of the business story has evolved all the time, leaving us with unlimited space for imagination.

Some people think that decentralization is one of the core concepts of the blockchain, and mergers and acquisitions is a centralized process, which is contrary to the concept of decentralization of blockchain. What do you think about this? Do you think that mergers and acquisitions in the blockchain industry are big or bad? What is the reason? Welcome to write your opinion in the message area.

"Declaration : The article is an author's independent point of view, does not represent the vernacular blockchain position, and does not constitute any investment advice or advice. 』

Does the US ban large…

Comdex uses blockchain to complete cross-border wheat trade worth about $100,000

The community is skeptical of Coinbase's ability to email Bitcoin