The unusual trend in the bond market has raised concerns about the imminent economic problems, but Trump said: "We are still far from the recession." Trump pointed out that the US economy is "strong." He accused the Fed and the news media that sang the US economy to curb economic growth. But with the approach of the US presidential election in 2020, concerns about the sluggish economy have been entangled in President Trump’s mind. Trump has reason to be worried because he bases his re-election on the foundation of the US economic boom. His hopes of winning the election may depend to a large extent on preventing the US from falling into recession before the November 2020 general election. If Trump is unable to re-elect, there will be a larger capital turmoil again.

BTC still maintains a narrow range of support at the key support level of 10,000 US dollars. Individuals still think that this is a falling relay form, because if it is support, it should be enlarged after a few days of sideways trading. Personally think that the sideways time is too long, and now the volume continues to shrink, macd returns to zero axis and begins to divergence again, the indicator is good for shorts, this round's downside breaks the possibility of the August 15 low. Sex will be very high, I have no bargain-hunting, and I still wait and see. If the target can be stabilized above the 5 antennas, it is likely to go down again to lower the pressure line. If it falls below the 10,000-dollar integer mark, it will fall below 8 At the low point of the 15th of the month, pay attention to the risk. 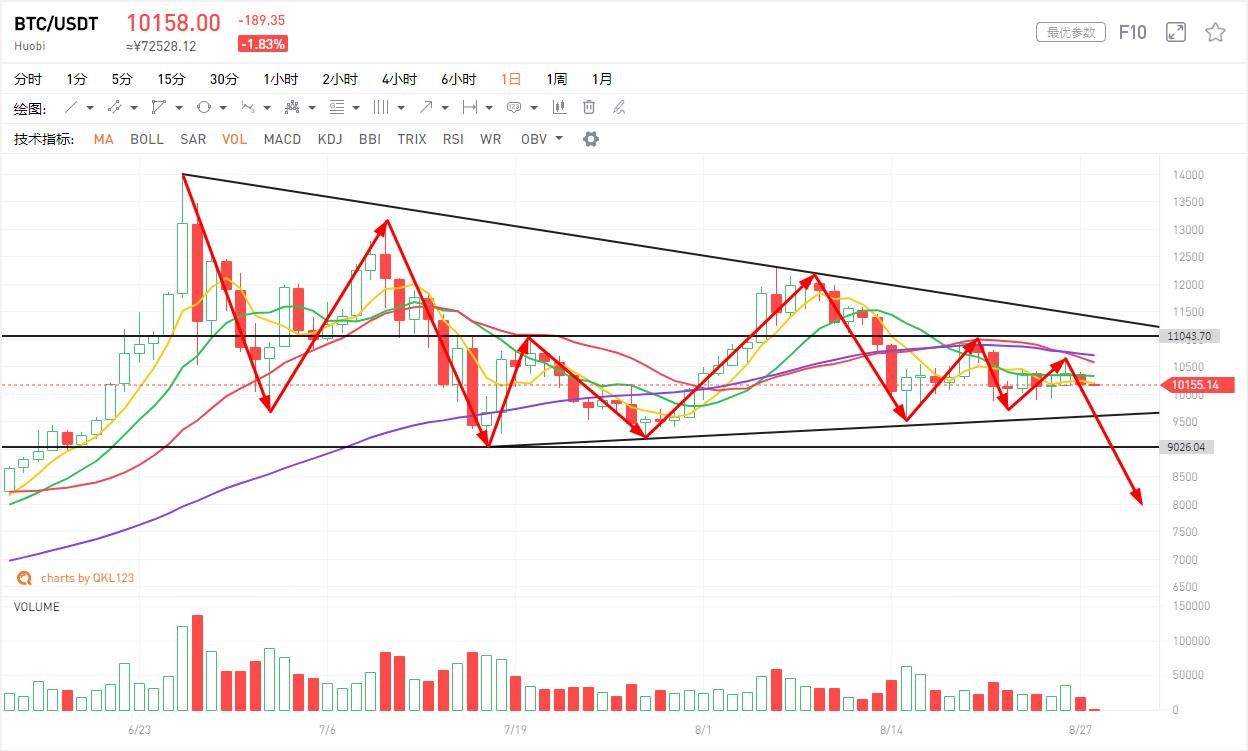 Judging from the performance of the current market, the target has no ability to take the independent market. In fact, regarding the trend of the target, we can observe how many new currencies have recently been known, and the currency on the market is representative of the market. More and more active, the target will have the possibility of rising water, but the current market environment is obviously not allowed, so the target is more of a follow-up trend, the target of the chasing chassis is not enthusiastic, with the current deal It is also unlikely that the volume will start to rebound. It is more likely to continue to fall back. There may be two kinds of movements after the target. One is to oscillate sideways, but to continue one of the moving averages. If there is a sideways volatility at this time. After the shock, there may be an upward rebound, but I still tend to continue down, because at least I have not seen any panic sentiment. 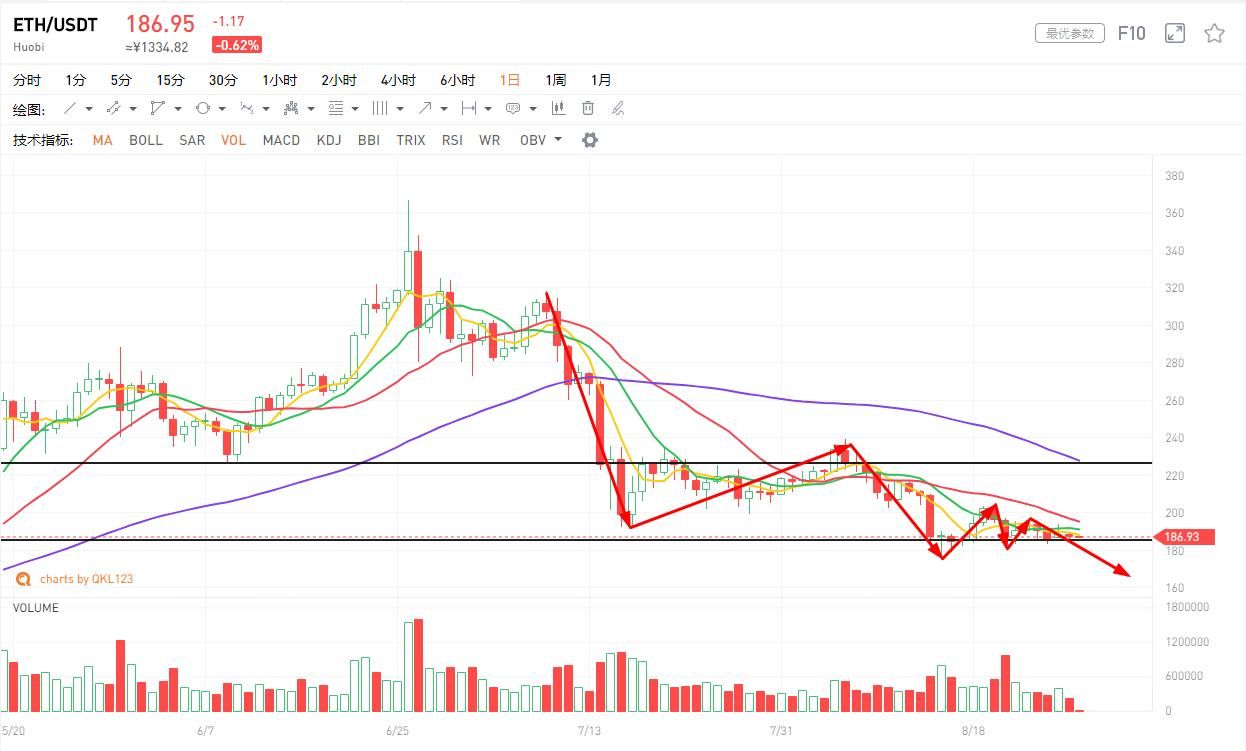 BNB is still down the 5 antennas, and is now close to the previous low of 24 US dollars. We have always believed that the support of 24 US dollars will be penetrated, but it will be uncertain whether there will be a certain range of anti-draw in the vicinity of the former low, but the opposite I think it is a chance to leave, not an opportunity to increase the position. The moving average system is short-selling. The macd indicator is diverging downward again under the zero axis. The downside of the target is very restrained, a bit like some large amount of funds. Trading methods, only the amount of breakthroughs of 30 dollars can only reverse the downward trend, but the current possibility is not big, because the volume is gradually shrinking, and now there is no sign of the bottom, pay attention to risk. 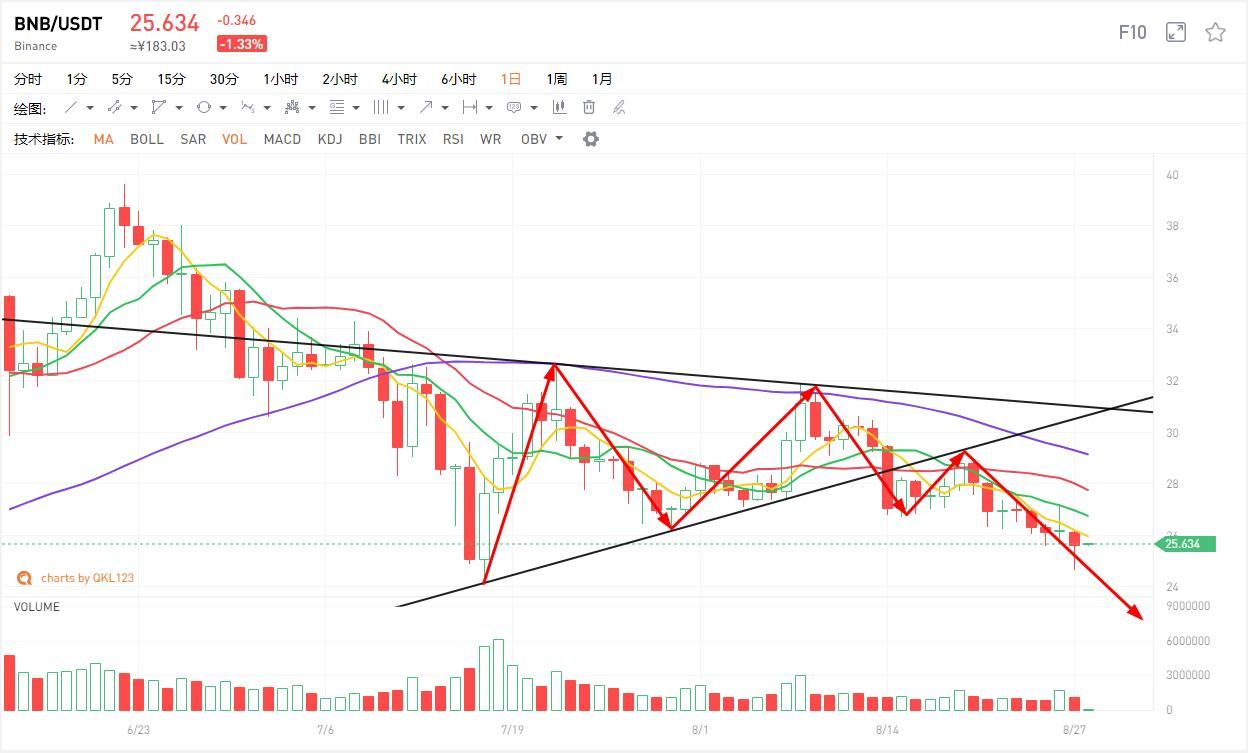 Analysis of the madman market on July 10: USDT will be destroyed after the protagonist of the coin.

Data: Over the past 24 hours, more than 12 transactions involving nearly 180 million XRP have been monitored

Report: Due to certain issues, users cannot receive and send BCH through the Cool X wallet