Recently, many people have been discussing the launch of Cosmos and its threat to the Ethereum ecosystem. This article will delve into the technical details of Cosmos and Polkadot, but will also first cover a lot of basic knowledge (with images as an aid) so that you can understand the meaning of these technical agreements.

First, we need to know why interoperability is important. In the existing Internet system, we can obtain and correct large amounts of data through APIs (specific application interfaces). But with blockchain technology, the data on different chains is isolated. So what do we mean by cross-chain interaction?

1. Assets can be transferred between different blockchains without the need for third-party trust.

2. Cross-chain smart contracts that can interact with each other.

3. A specific blockchain architecture that can be used for other blockchains.

Before delving into the details of any particular cross-chain technology, I would like to take a moment to talk about the most basic distributed system so that everyone can understand the next concept more easily. You need to understand that blockchain technology is only a global group of machines, they can reach a consensus on the data to ensure its authenticity.

As the name suggests, distributed systems are a combination of computers that work to achieve a goal. The goal is to output the same content to a large number of users around the world (for example, your Twitter newsletter will always send you the latest news). In order to achieve this goal, they must overcome the following problems:

1. Timing. Each computer/system performs the same tasks at their own time and pace.

2. Order. Since time will “move” after a period of time, it is still very difficult to resolve the content and time of the event. This makes sorting a very complicated issue because each system has its own account with events and time.

For humans, the solution to the most problems is through good communication. However, this is more complicated by computers, because communication between computers is asynchronous or synchronous.

What does it mean?

In summary, blockchain systems need to have security (synchronous output protocols) and activity (blockchains need to continue to grow and operate). If your blockchain is secure but no longer running, it will stop popping. If this blockchain is just running, but not safe, then there will be a lot of forks, and you can't know which one is the real one, unless there are rules of the rules (for example, Bitcoin's longest chain principle)! 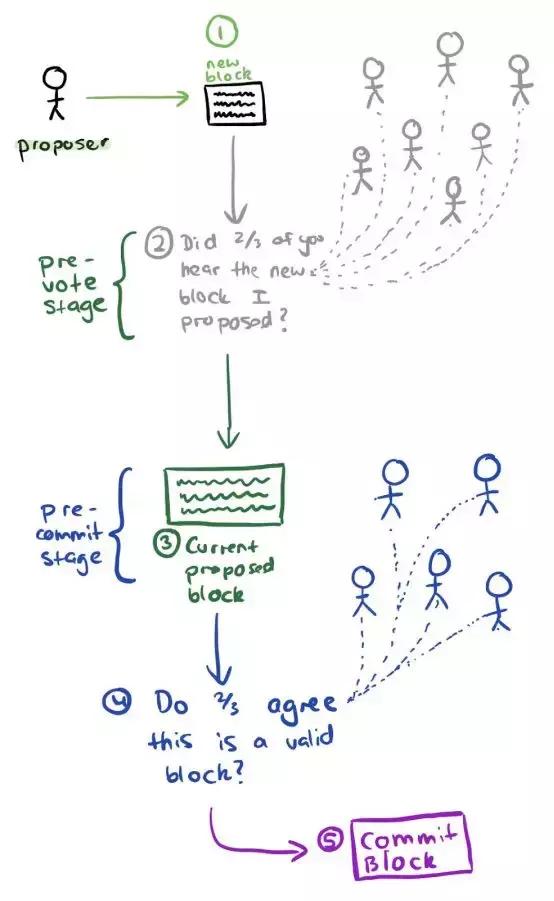 1. If you want to form a block with transaction data, one party needs to hear a lot of data to broadcast on the network . We refer to such individuals as applicants because they want to produce this block.

2. Once the block is completed, everyone can participate and pre-vote to confirm that they have heard the same block broadcast. Very importantly, in the pre-voting stage, the block may also be incorrect/falsified because everyone just wants to reach a consensus and they have received the same data/block.

3. Once more than two-thirds of the participants reach a consensus and they receive the same block, they are in the pre-submission phase. The pre-submission vote will determine if this is a valid block and there is no fraud.

4. If more than 2/3 of the participants voted that the block is valid and correct, then we can successfully submit the block to the chain.

5. The block height will then increase and steps 1-5 will be repeated.

According to what we said above, we can see that the next steps can ensure that the order of the blocks is known (block success can increase the block height), each computer can get its own conclusion by calculation, and then The network communicates to get the final timing and can prevent failures (fraudulent nodes requesting blocks or nodes that cannot vote).

In-depth study of the details of the technical organization, Cosmos Hub used Tendermint developed by Jae Kwon in 2014 as its consensus algorithm (and also practical Byzantine fault tolerance). This means that each voting session (before voting and before submission) has a fixed time for everyone before moving on to the next stage. When a block is completed, the process will not be returned. Because as long as the transfer in the block is completed, this means you can have instant mobile and IoT payments. This process is also known as "quick settlement" because there is no need to confirm.

In order to reduce the theoretical knowledge, I will list the steps from ETH to BTC, which is a case that everyone likes very much. 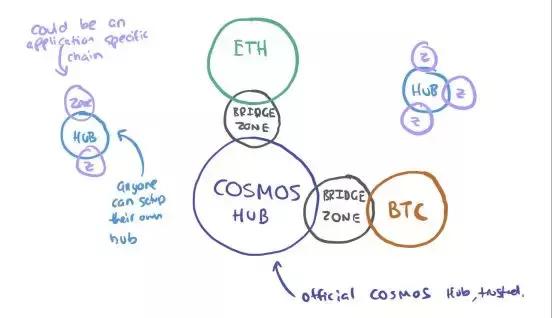 1. A trusted intermediary area will be created on the Ethereum network, and then a corresponding verifier will be responsible for relaying information from the Ethereum Bridge area to the Cosmos Hub.

2. Since Ethereum and Bitcoin are both probabilistic (it is possible that the current backbone is not correct), the verifier needs to wait for a certain confirmation to ensure that the transfer is actually completed.

3. Once these certifiers have confirmed that the transaction is complete, they will initiate a transaction from their own region to receive Ether's Cosmos Hub, which will create a form of hybrid that combines Cosmos Ether and holds it. Now, any other Cosmos Zone will now know that this new hybrid Cosmos Ether pass exists in the system. 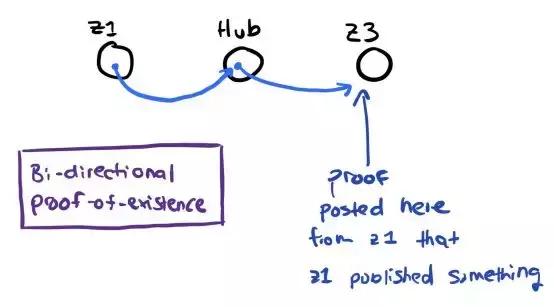 In this model, there are several assumptions:

Boca was founded by Gavin Wood, co-founder and former CTO of Ethereum, and president of the Web3 Foundation. In 2017, Boca raised $145 million through crowdfunding through the sale of the original pass DOT. If Cosmos is a development network using hub and zone methods, Boca is a separate "relay chain" and will give a lot of blockchain systems added to it, namely "parallel chain s" (this is short for parallel chain) Provide a lot of benefits.

The main innovations of Boca are as follows:

Boca's consensus mechanism consists of two parts: GRANDPA and BABE. GRANDPA is a tool for final determinism, a concept derived from the GHOST fork selection rules (similar to the Ethereum Casper protocol). The introduction of such a tool allows some of the blockchains to be finalized and proven to be unrecoverable. Separating the deterministic tools from the block production allows for final determinism and the creation of new blocks on the chain through different processes. This means that actual block production can be expanded and is different from the Cosmos Tendermint algorithm with a practical Byzantine fault tolerance mechanism. In the Boka ecosystem, the following sections are included:

Their main responsibilities include:

Boca can be thought of as an interconnected system, as long as it wants to communicate with other blockchains through bridges, then you can connect directly to them. All parallel chains and relay chains form an overall versatile system. Parallel chains can be combined with custom logic to handle their own state transitions when receiving and distributing information to other chains. Parallel chains can also interact with each other, unlike Cosmos, where any information needs to pass through the Hub.

Let's take an example. This may be easier to understand. What do you need to do if you want to convert a currency in a parallel chain into an asset in another chain? Imagine the case of converting ETH into BTC.

Proofreaders in the parallel chain of Ethereum will transfer the head of the block to the verifier of their parallel chain. These certifiers will sign and publish this information in related transactions in the Ethereum Bridge Smart Contract, and this is the way to identify and communicate with the parallel chain area. Any ETH issued may be held by a Poca Certifier and may also be used as a collateral for an invalid transaction by using the DOT Pass. The Ethereum Parallel Chain communicates with the Bitcoin Parallel Chain and then transfers the BTC to the specified address by the certifier of the particular parallel chain. All the details of the design need to be finalized, but according to the theory of cross-chain communication, it can be guaranteed that there is no need to confirm at all.

We need to note that Poca's parallel chain mechanism distributes locations through an unrecognized chain auction. These auctions lock the DOT pass for a period of time, ensuring that these parallel chains are connected to the Boka network. At this time, governance can be accessed and can resolve unexpected situations, such as parallel chains with serious errors or fraud. Boca will do it through chain management because it believes that this is the best way.

As Gavin Wood said in the article, "I firmly believe that if any blockchain does not introduce chain governance mechanisms, including viable update mechanisms, then this will undoubtedly ruin themselves. I do not believe in the "chain governance process"," "Chain signaling" and "rough consensus mechanism" can make real holders in the blockchain ecosystem effectively master and promote their long-term success. I also believe that it is impossible to change the governance situation.

Regarding interoperability, many of these problems seem to have been resolved, but the implementation level is still difficult to achieve. Cosmos was officially launched in March 2019, but currently only the startup and operation of the Cosmos Hub has been completed. Their next plan is to complete the operation of the internal blockchain communication framework. Boca will run at the end of 2019, but only the relay chain will go online.

In general, I am very excited about the launch of Cosmos and Boca, and the most interesting is the developer's application and the competition between various blockchains, how they will run. Blockchains that meet specific application needs are very important at present, because not only the underlying architecture has not yet been completed, developers also need the resources and talent behind them, and get enough security.

So is this a trade-off? It's still hard to say now. Although Ethereum's development speed is lower than the roadmap's expectations because it wants to create a highly secure and unlicensed innovation mechanism, Ethereum's chain management has developed very well.

On the contrary, many crypto-asset networks use the security of other chains, such as Ethereum, and then wait until they can guarantee security through their own communities before transitioning to their own chain. MarkerDAO is a good example of the resources they have to build their own blockchain and become part of the parallel chain of Boca. If for some reason it cannot be called part of a parallel chain, it can build a bridge area on Cosmos and then share the security. Boca is planning to provide a bridge area for blockchain systems that do not provide shared security but still require information transfer.

Do not redistribute without permission. To read the original text, please search for the public number: DalingRe-DR, follow the public number, click on the link at the bottom of this article.