The New York Attorney General's Office (NYAG) investigated Tether's hearings. This hot spot has just passed, and Tether has once again been pushed to the cusp of public opinion. This time, it is because of CNHT. 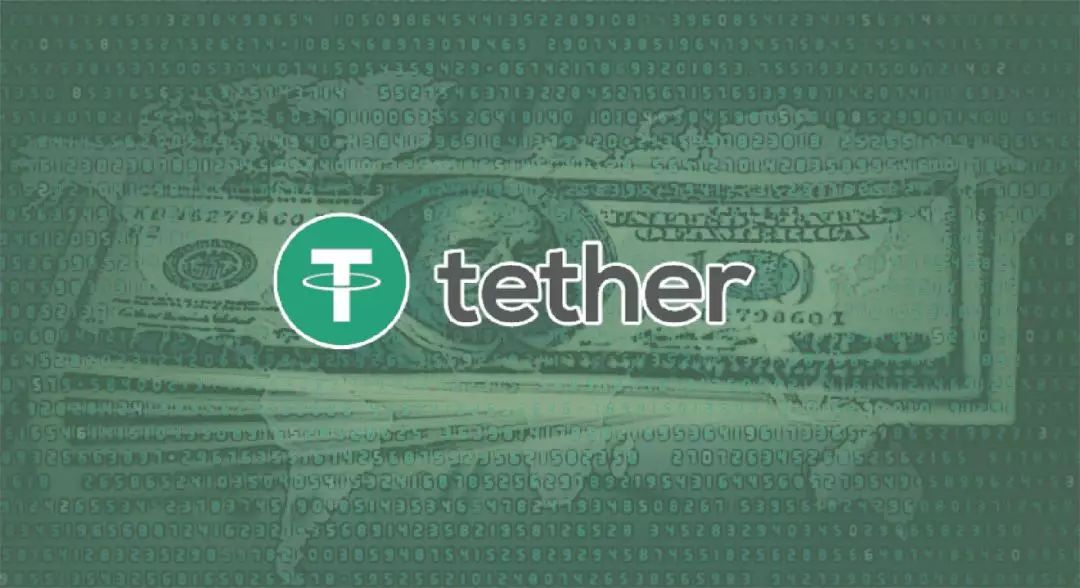 On August 21st, Bitfinex shareholder Zhao Dong revealed in a circle of friends that Tether will issue CNHT and anchor the stable currency of offshore RMB. Subsequently, Zhao Dong explained that the reason for issuing CNHT was only to meet the needs of different users, not to make up for the USDT deficit or to avoid the USDT thunderstorm.

Despite this, the voice of opposition in the industry is still endless. Du Jun, the founder of the node capital, publicly stated: “The platform for any online CNHT trading, I and the node holding company will resist.” Xiao Lei, a financial writer, said that Tether issued stable coins based on offshore RMB, and the operational space will be more Large, the system risks faced by investors will be even greater.

The stable currency USDT issued by Tether currently accounts for more than 80% of the entire stable currency market and is an absolute “overlord”. However, this seemingly big but overwhelming "hegemony" has also been called a "lei" by many insiders, because Tether's bank account is not regulated, and it is always obscured during the audit process. Some core information is not I would like to disclose to the outside world that “freely” issuance of USDT, and the relationship with Bitfinex is complicated…

If the USDT "thunder" burst, it will undoubtedly have a devastating impact on the entire cryptocurrency market. Therefore, whether as an investor or as a general blockchain enthusiast, we need to have a deeper understanding of USDT.

The birth and development of 01 USDT

In January 2012, JR Willett published a white paper explaining the possibility of building other cryptocurrencies on top of Bitcoin's agreement. After the concept was implemented on the Mastercoin project, the Mastercoin Foundation (later renamed the Omni Foundation) began to promote a "second-tier network" based on Bitcoin.

In the article " How does the USDT run on the BTC ", the vernacular blockchain is introduced: The relationship between the USDT and the Bitcoin Omni protocol is like the relationship between the ERC-20 Token and the Ethereum ERC-20 protocol. Just as the address of the ERC-20 Token is the same as the address format of the ETH, the USDT address and the BTC address based on the Omni protocol are exactly the same.

On October 6, 2014, the first batch of USDT based on the Bitcoin Omni agreement was officially born. Tether claims that it will guarantee strict compliance with 1:1 reserves or assets, that is, for every USDT issued, its bank account will be guaranteed with $1 of funds or related assets. In addition to the USDT-based USDT, Tether also launched stable coins based on the euro and the yen.

In January 2015, the established cryptocurrency trading platform Bitfinex (established at the end of 2012) launched the USDT transaction.

The rapid development of the USDT is largely due to Chinese users. After the “June 4th Incident” in 2017, many trading platforms “goed out to sea” and stopped the RMB direct trading business. USDT became the “middle bridge” for purchasing other cryptocurrencies. According to a research report released by the blockchain data analysis agency DIAR in June this year, the number of USDTs flowing to China accounted for only 12% of the USDT increase in the fourth quarter of 2017, and this figure rose to 62% in the second quarter of this year. In other words, more than half of the additional USDTs now flow to Chinese users. 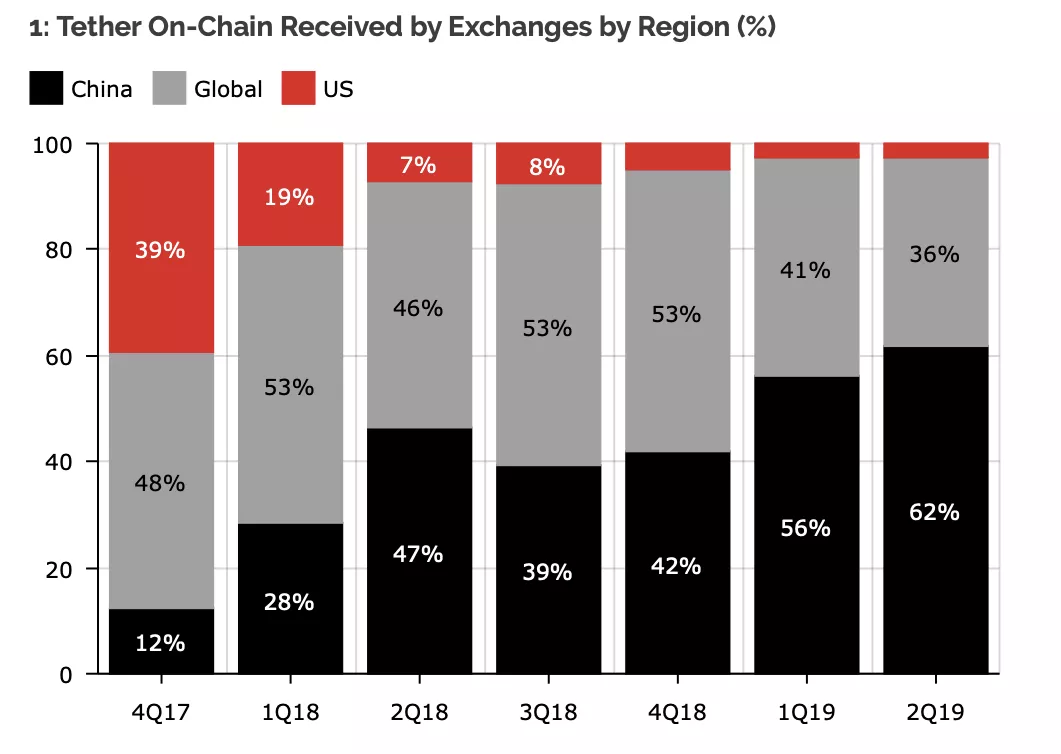 According to CoinMarketCap, the total circulation of USDT increased by more than 11 times between September 2017 and June 2019. 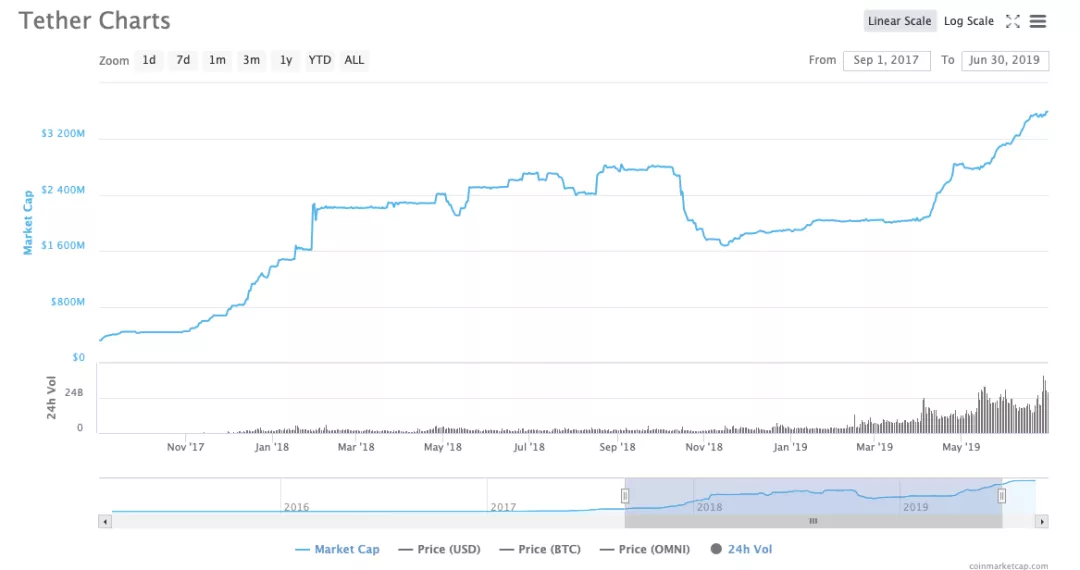 As demand for USDT continues to expand, in September 2017, Tether announced that it will launch the USDT based on the Ethereum ERC-20 agreement. On April 17 this year, Tether launched a USDT based on TRON (wave field); in June this year, the EOS-based USDT entered the testing phase. In addition, Tether also announced that it will issue USDT on Algorand.

In the article " USDT over-the-spot price is more than 7 yuan, why the stable currency is unstable ", the vernacular blockchain mentioned: Due to the imperfect laws and regulations and regulatory measures, the USDT can not even be called in the strict sense. It is a kind of "bond" issued by Tether, which can only be regarded as a promise.

Over the past few years, Tether has been suspected by many investors, and negative news is always difficult to prove.

In the " USDT, this thunder once again caused market turmoil, is it not explosive? In the article on Future Impact Geometry , the vernacular blockchain has sorted out some negative news from Tether and USDT in recent years:

On February 8, 2017, an article called "Bitfinex Don't Want to Hear", leaked multiple recordings, showing that the Tether team and the Bitfinex team are discussing bank fraud, money laundering, and even acknowledging financial fraud. An executive at Tether, Phil Potter, even admitted in a leaked recording that the company had set up a company account in Taiwan to transfer money and do something that needed to be "obscured."

2, can not prove that there is a full amount of margin

In April 2017, due to financial fraud, Tether's three bank accounts in Taiwan were banned.

On June 20, 2018, Tether issued a Transparency Report issued by a law firm. This transparent report not only did not reassure investors, but also caused more doubts. Tether explained that because the four major accounting firms are not willing to endorse them, they can only ask for help from law firms.

On October 1, 2018, Bloomberg reported that USDT's custodian bank Noble Bank was insolvent and had lost many customers, including Tether and Bitfinex, and is currently looking for buyers to sell its assets. On October 17, informed sources revealed that the partnership between Tether and Noble Bank has ended. On November 1st, Tether announced that it had established a partnership with the Deltec Bank in the Bahamas and announced the bank's approximately $1.83 billion in assets.

As of today, the total amount of USDT has exceeded $3.99 billion. However, in the past six months, Tether has not provided relevant information to prove that there is a sufficient US dollar deposit.

On January 24, 2018, an anonymous report stated that as of January 4, 2018, Tether had issued a total of 91 additional USDTs. The report also raises questions about whether Tether transfers USDT to Bitfinex's wallet without receiving US dollars, and uses USDT to buy low-priced bitcoins for profit or trade.

In April of this year, Tether issued 10 additional shares, with a total amount of up to 745.9 million US dollars. For details, see the tweet before the vernacular blockchain , “ USDT in the whirlpool of public opinion: up to 10 times in April, totaling over 700 million US dollars ”.

4, the relationship with Bitfinex is complicated

The relationship between Tether and Bitfinex is complex. In the indictment of the New York Attorney General's Office (NYAG), Tether was accused of misappropriating $900 million in USDT reserves to help Bitfinex make up for the deficit.

According to DAppTotal, as of today, USDT's market share in the entire stable currency market has climbed to 81.19%.

Although USDT has further consolidated the status of “Stabilizing the Leading Capital”, competition from other stable currencies is still not to be underestimated.

In the article "The old stable currency is unstable, and the new stable currency can be fully processed", the vernacular blockchain introduces more stable and transparent currency GUSD and TUSD.

In addition, with the popularity of DeFi (decentralized finance) concepts, stable coins that are guaranteed by algorithms, such as the stable currency DAI launched by MakerDAO on Ethereum, have also achieved rapid development.

I believe that the stable currency market will be more diversified and the structure will be healthier. It will not be too far away.

In response to the RMB stable currency CNHT mentioned at the beginning of the article, Zhao Dong commented:

In this regard, the founder of the node capital Du Jun commented: It depends on who issued, Tether certainly can't.

Message Mining No. 315: How do you think about Tether to issue RMB stable currency CNHT? Do you think that the advantages outweigh the disadvantages or do more harm than good? Feel free to share your opinion in the message area.

Editor's Note: The original title is: "Issues RMB stable currency, is Tether "mad"? Is it left behind for the USDT thunder? 》

DappReview is acquired, Binance's exclusive response: DApp is an important track for large-scale landing of blockchain